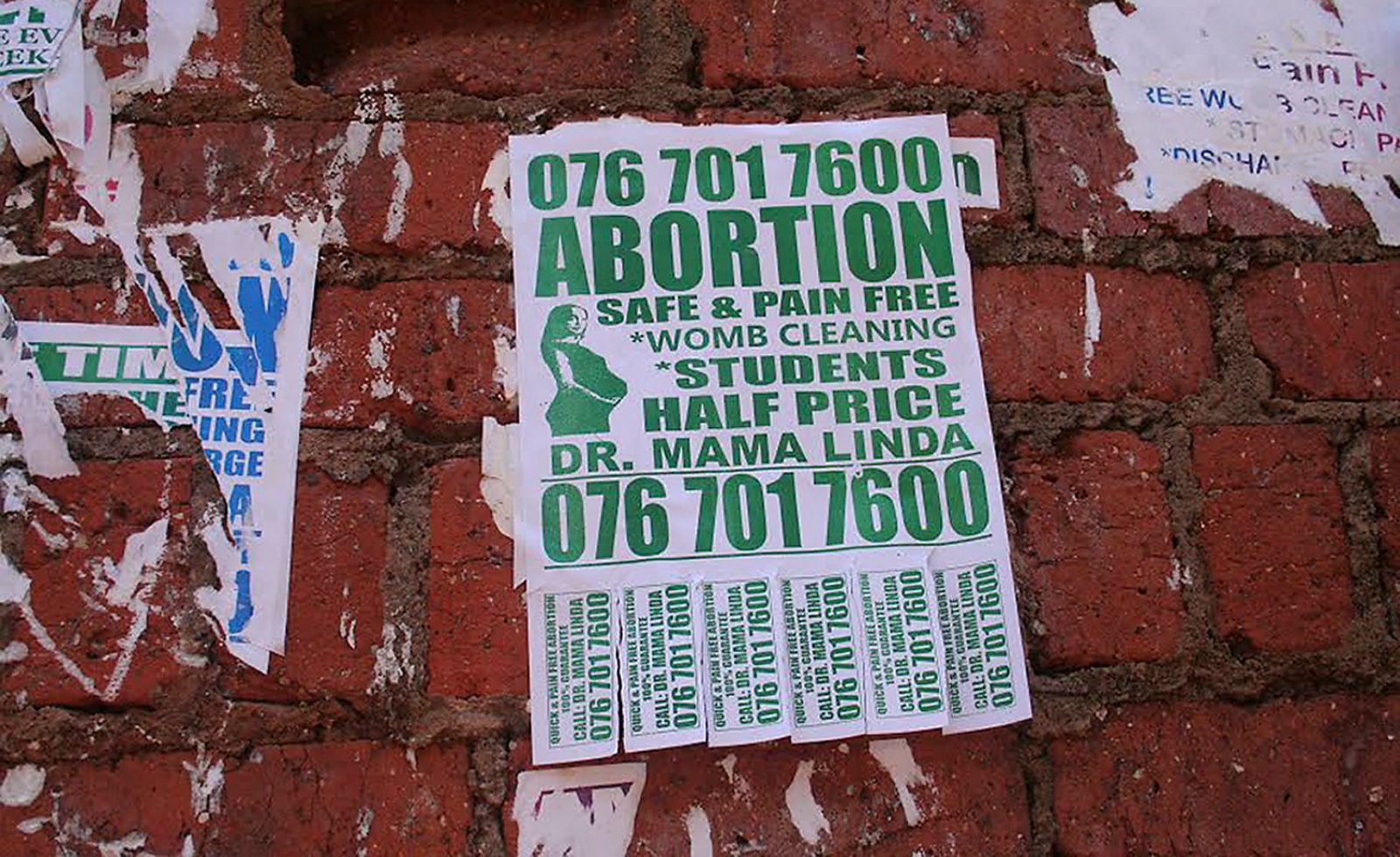 An advert for an unsafe, illegal abortion. (Photo: Annica Marincowitz)

This week we focus on activism to promote International Safe Abortion Day, a day when women’s reproductive health and sexual rights take centre stage.  There are also three other important international days that have direct relevance to civil society struggles in South Africa.

On Monday, 28 September, we observe International Safe Abortion Day, a day of action for the decriminalisation of abortion. Research proves that decriminalisation and the right to choose has a positive effect on women’s health. You can read more about safe abortion rights here.

In the meantime, check out these two webinars:

The African Charter on Human and Peoples’ Rights on the Rights of Women in Africa protocol (also known as the Maputo Protocol) recognises that reproductive health includes the basic right of all to freely and responsibly decide the number, spacing, and timing of their children. While many countries have signed the protocol, some continue to criminalise abortion services, including Angola, Mozambique, and Namibia.

At 3pm Section27 is hosting an activist dialogue on access and the right to abortion in eastern and southern Africa. Join Mamello Makhele (midwife), Lucy Masiye (World Young Women’s Christian Association), Dr Tlaleng Mofokeng (UN Special Rapporteur on the Right to Health), and Hilma Shikwambi (Independent Midwives Association), as they discuss the barriers to safe abortion services across 10 countries in eastern and southern Africa and outline issues around removing those barriers. 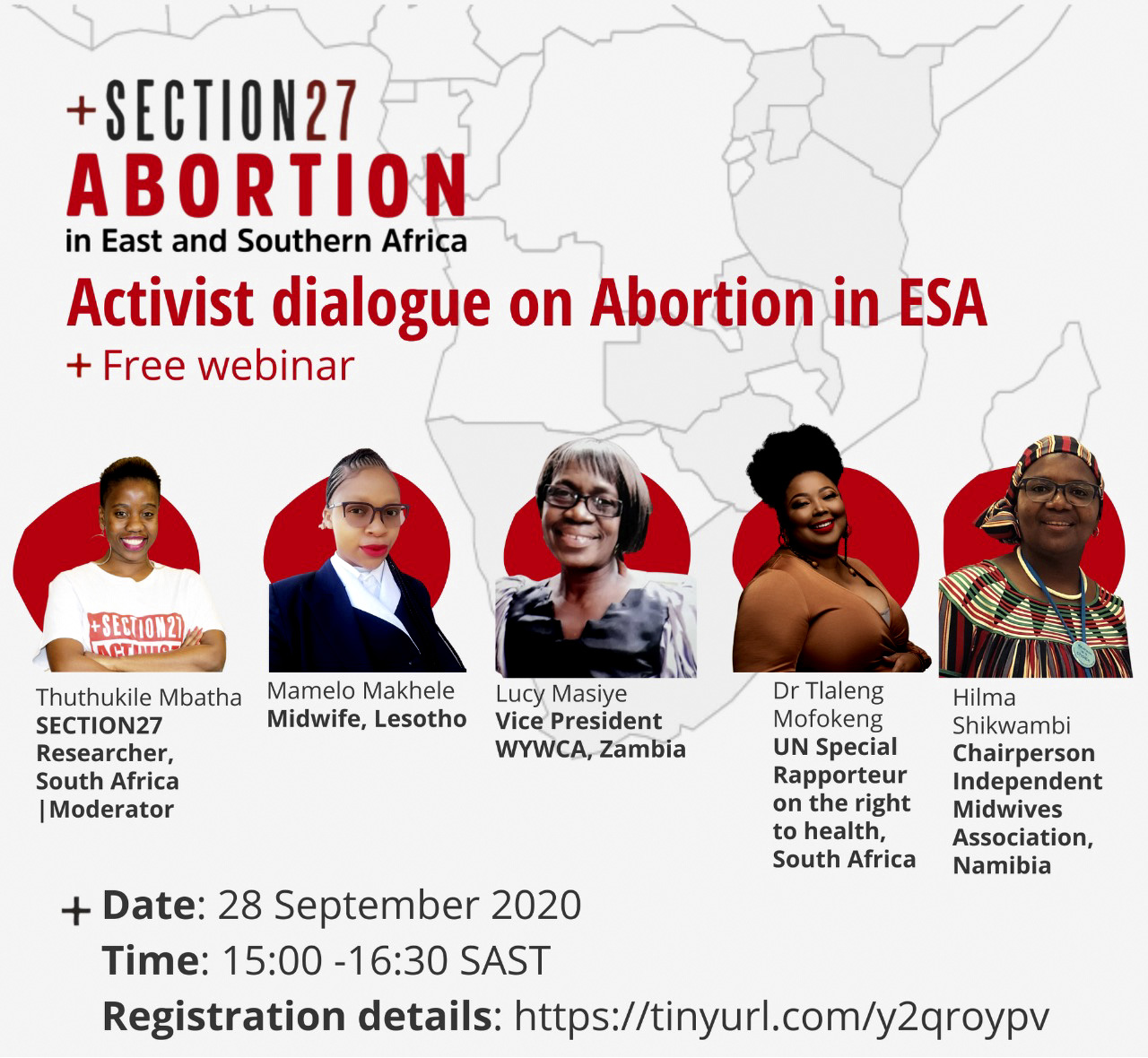 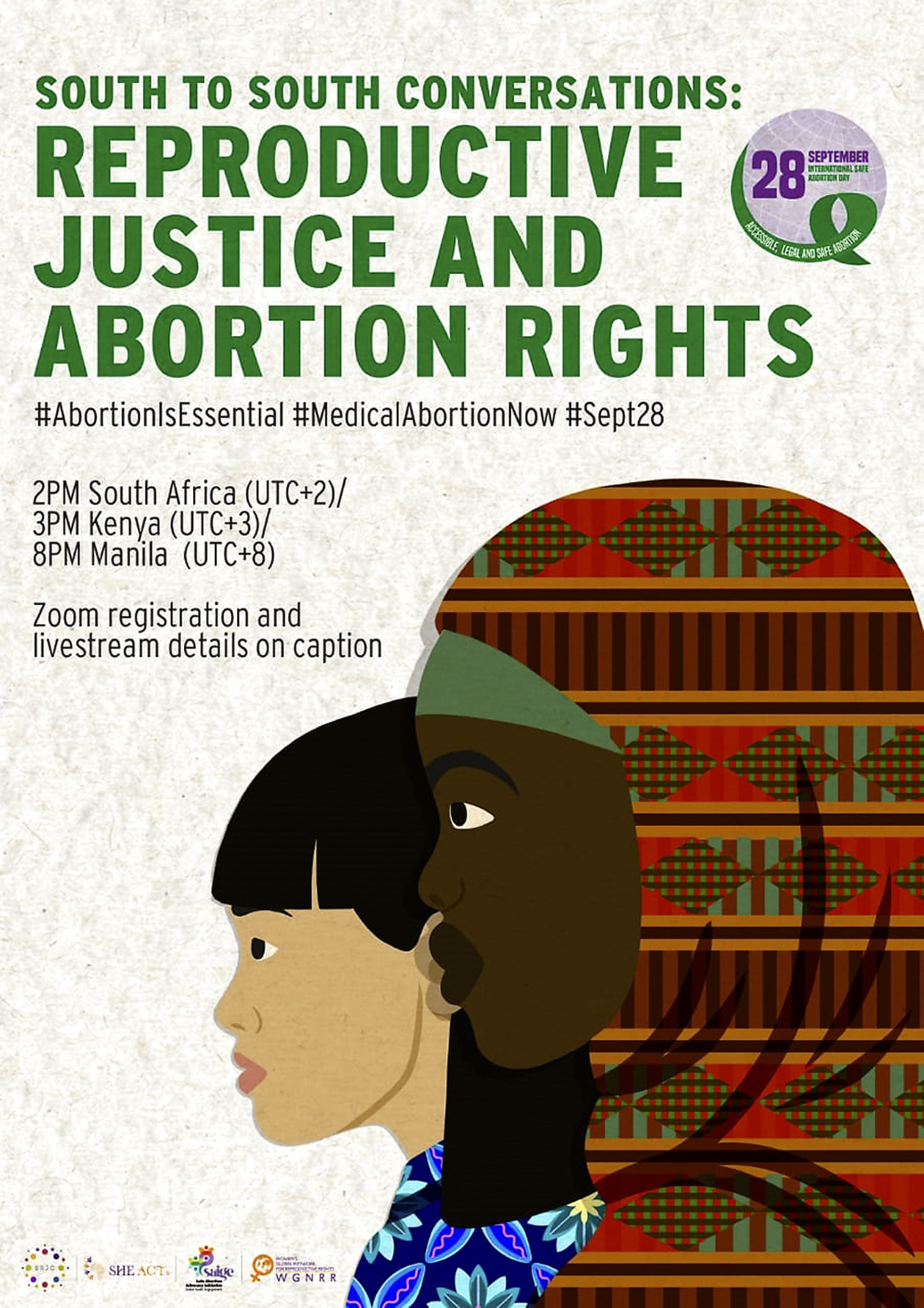 Earlier this year, the Daily Maverick reported that the average South African person wastes between 8kg and 12kg of food every year.

While the Covid-19 pandemic may have amplified the hunger crisis plaguing South Africa, it did not cause it. On Tuesday, 29 September, we observe the first International Day of Awareness of Food Loss and Waste, highlighting the issue of food waste and efforts at resolving it.

Finally, the International Day of Non-Violence is observed on 2 October, the birthday of Mahatma Gandhi. The UN General Assembly views the day as an opportunity “disseminate the message of non-violence, including through education and public awareness [to] secure a culture of peace, tolerance, understanding and non-violence”.

The rest of the week

The hunger crisis in South Africa is worsening – but it is not because there is not enough food to go round. On Monday at 2pm, the C19 Food Working Group, a collective of organisations, academics and individual right to food activists, invites you to join a Zoom meeting on Alternative food networks: different production models and marketing channels for small-scale farmers. Join here. 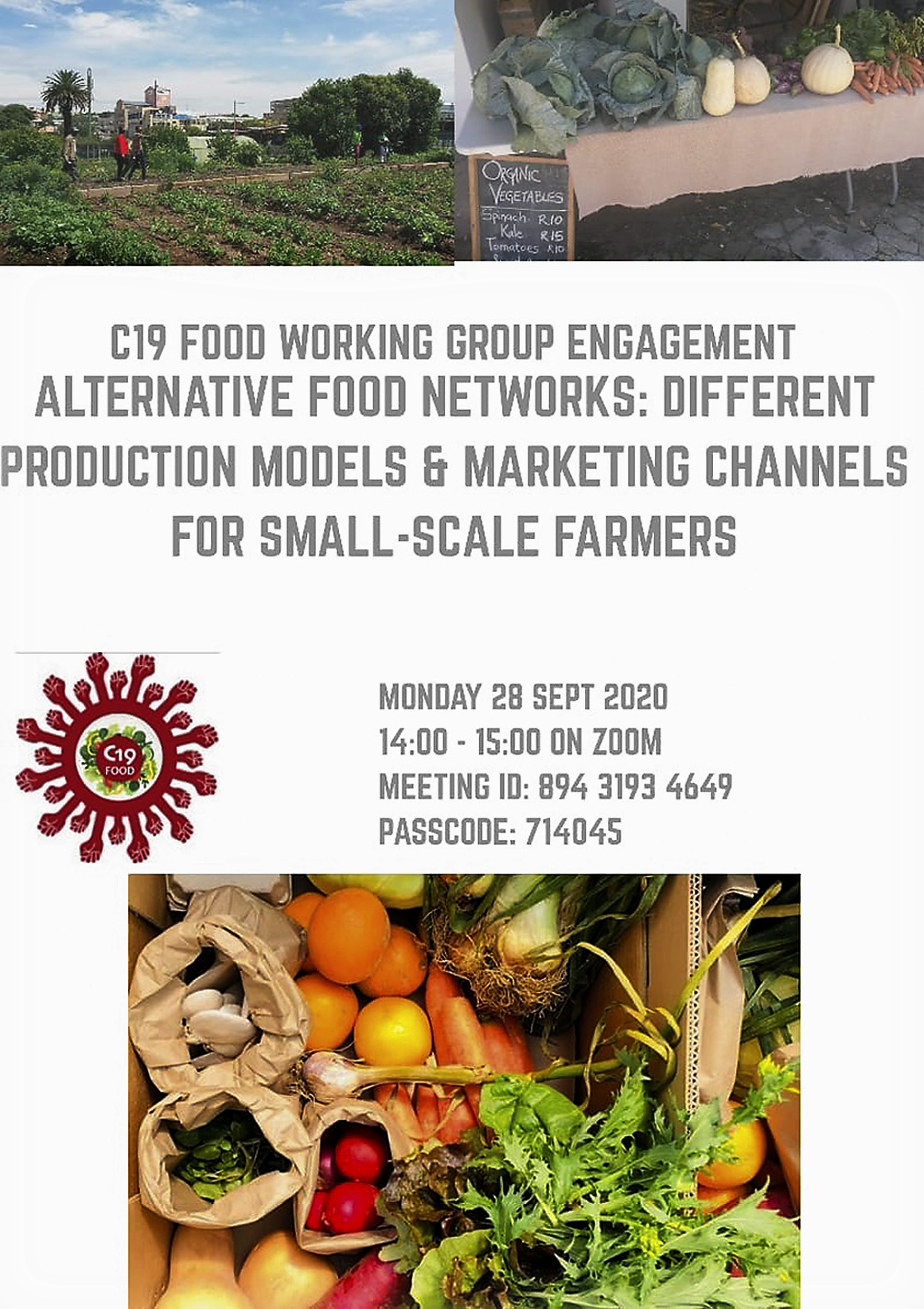 On Tuesday at 3pm the Children’s Institute at UCT, together with Sonke Gender Justice and the SAMRC Gender and Health Research Unit, will be hosting the third in its series of seminars on promoting intersectoral collaboration to end violence against women and children.

This week join Shanaaz Mathews (Children’s Institute) and Natsnet Ghebrebrhan (Raising Voices) as they discuss what we are learning about interventions in Africa to address violence against women and children. Register here.

“Unravelling South Africa’s Just Transition: Stakeholder Perspectives” is the theme for a webinar on Tuesday at 10am.

South Africa, a carbon-intensive economy, has initiated a transition to a more sustainable development pathway. While this is centred on the energy sector, the transition is an economy-wide transformation. In a highly unequal society like South Africa, the need for a just transition which would empower vulnerable stakeholders has emerged as an imperative. Yet tensions remain, which hinder an inclusive process and outcomes. Part of the early process is forming a unified understanding and pathway that is inclusive and just. What do stakeholders mean when they talk about a just transition? How can South Africa achieve a just transition? This dialogue explores perspectives from the government, the private sector, the labour movement and civil society. It builds on the first dialogue hosted on 7 July. The recording is available here: https://bit.ly/3c2XUKn

At 12pm on Wednesday, the University of the Witwatersrand is hosting its second webinar in a series of critical engagements titled Pandemic Pangolins: Systems, Science, and Society. Wits is bringing together various experts to debate and evaluate the body of knowledge emerging because of the current Covid-19 pandemic. This series probes pandemic innovations, responses and partnerships.

This week, speakers (to be announced) will discuss human rights and fighting discrimination during epidemics. Register here.

Join Dr Attiya Waris (University of Nairobi), Catherine Anderson (OECD), and Dominic Brown (AIDC) as they discuss the OECD “Action Plan on Base Erosion and Profit Sharing” and its implications for African countries.

Hosted by the Institute for Economic Justice and other organisations, the 2020 virtual festival is themed Practical action towards a pluralist economics curriculum. The event, which will go on until Saturday, 3 October, is organised as a series of workshops with topics ranging from economic inequality to gender in economics. For more information including the programme visit the REFA Festival 2020 site. To register go here.

At 2pm join the Good Food Network for their second #UnPoison webinar that aims to raise awareness on the impacts of agrochemicals on health and the environment.

And while on the topic of health … the People’s Health Movement (PHM) and the Third World Network have opened applications for their online course: The struggle for health and access to affordable medicines. The six-week course is for young public health professionals including health activists and will provide them with an introduction to the issues of access to medicines in the context of the political economy of health and the structure of the pharmaceutical industry.

The course will commence on October 30th and applications close on Saturday, 10 October, so hurry and apply here

South Africa is full of activists whose voices and campaigns need to be heard, and we want to report on all of them. So, wherever you live, if you have virtual events or meetings which you think other activists ought to know about, write to us at [email protected]

Also, please sign up for our weekly newsletter here