The UN at 75: Technology wars, the US-China meltdown an...

The UN at 75: Technology wars, the US-China meltdown and Africa’s quandary 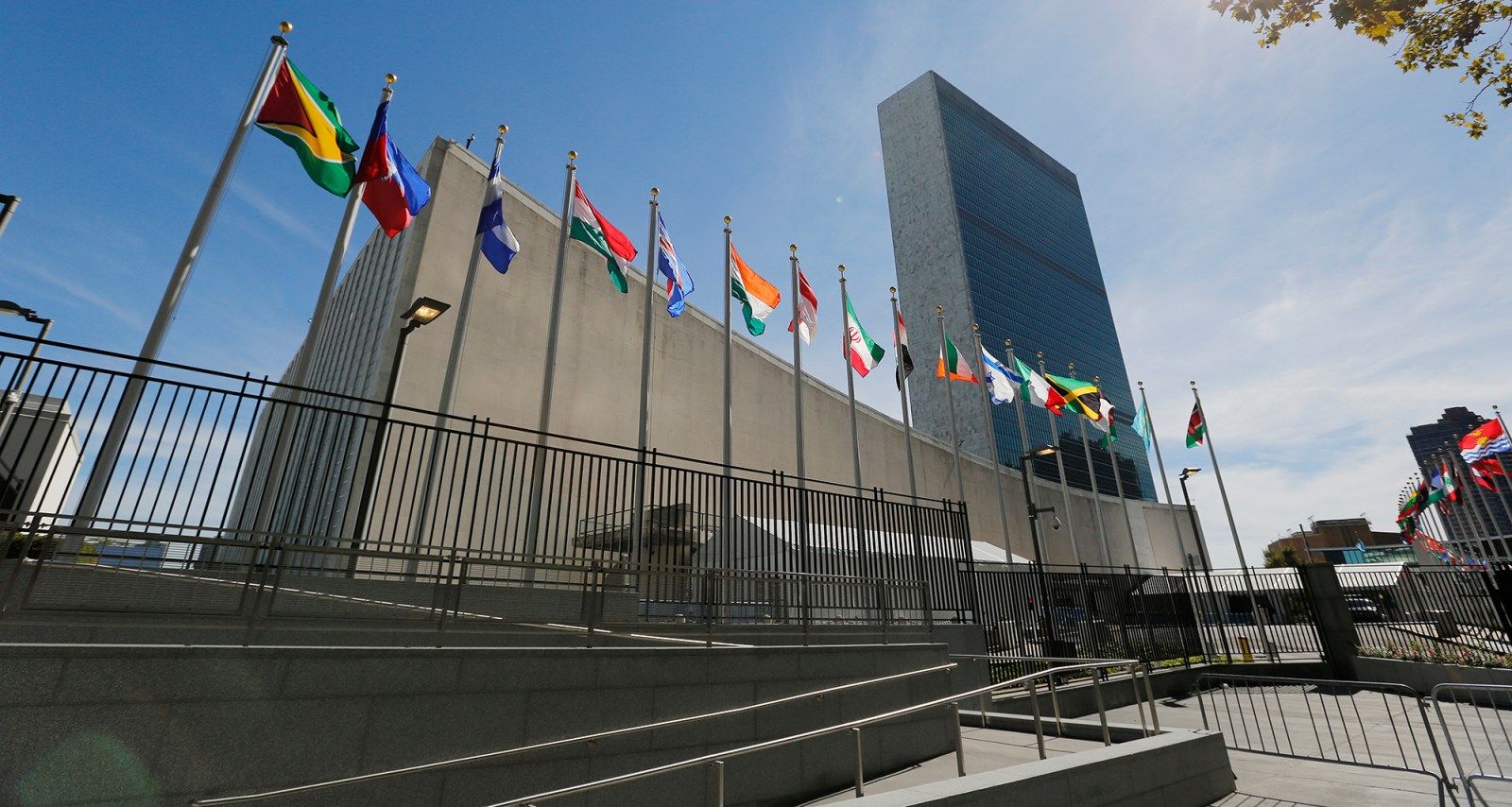 United Nations headquarters in New York. The partnership between the UN and African Union has become central to strengthening peacebuilding across Africa. (Photo: EPA/MATT CAMPBELL)

As the UN turns 75, economic nationalism, the rush for technological dominance, religious chauvinism and anti-immigrant sentiment are among the most influential factors forcing a rollback against globalisation and its attendant implications. The rise of China is undoubtedly one of the biggest stories of the late 20th and early 21st centuries.

The United Nations (UN) marks its 75th anniversary at a time when the world is in the throes of the deadly Covid-19 pandemic. It also happens at a time when the US, the main anchorage of the post-WW2 order, appears fundamentally weak and unable to inspire the upholding of democracy at home and abroad.

US President Donald J Trump has become an “arsonist” as he denies the impact of global warming and scientific ways of managing Covid-19 at home. On a global level, he continues with his divisive politics and economics, unlike anything seen in more than three decades. The pillars of the UN system such as the World Health Organisation, World Trade Organisation and UNESCO, and many others, are increasingly showing strains from the endless attacks by Trump’s administration. The worsening tensions between the US and China have accelerated the bifurcation of the international system. This has huge global implications especially for Africa as these global giants constitute the world’s biggest and second-biggest economies, respectively.

Economic nationalism, the rush for technological dominance, religious chauvinism and anti-immigrant sentiment are some of the most influential factors in the current changes that in the West, are forcing a rollback against globalisation and its attendant implications. The rise of China is undoubtedly one of the biggest stories of the late 20th and early 21st centuries in the international system.

Accustomed to being at the acme of the global order, the United States is understandably unnerved by China’s growing influence and its seemingly inexorable march to the pinnacle of the international system. To forestall China’s progress and appeal to the more nationalistic demographic of the Western world, the current American administration initiated a trade war with China, which some argue will do more to injure America than to stymie China’s economic progress. The trade war includes a raft of what should be punitive measures such as high tariffs on Chinese exports. However, technological dominance is likely to be one of the most important tools for shaping the emerging global order.

For a long time, Western tech giants dominated the technological sphere. There has been a sea change in this, as China has entered the fray and penetrated promising markets in both the developed and the developing world. Huawei, WeChat, TikTok, Tencent and ZTE are leading the pack in this respect and, predictably, the United States begrudges the Chinese tech giants their massive strides.

Africa seems to be content with knowing how to use foreign-originated technologies rather than developing its own. For now, some realistic suggestions have been that, while the continent embarks on efforts to develop African-bred technologies, it should begin to create and advance its own search engines, and proactively engage Huawei on these terms.

Under subtle duress from America, the United Kingdom and Australia have banned the usage of Huawei technology in rolling out 5G technology. In Australia’s case, Huawei retaliated by ending its oldest major sporting sponsorship deal in the world with Australian Rugby League team, the Canberra Raiders.

Conventional Western wisdom against Huawei seems to be that it could be used by the Chinese government as a spying agent. The West, of course, does not seem to blush with hypocrisy considering the fact that Western technology and social media platforms such as Facebook and Twitter have had to endure allegations of illegal and unpermitted data harvesting of their consumers.

Africa is one part of the world where China and technology seem to have found a more welcoming environment. However, merely consuming Chinese technology is inadequate for Africa. The continent constitutes the youngest region in the world and hence the future belongs to Africa. What this entails is that Africans should be leaders in the quest for inventing and using safe technologies that, while enhancing the value of life, will also be able to predict or detect human activities that threaten the planet and peace.

The Fourth Industrial Revolution (4IR) provides an opportunity for Africa to harness the talents and skills of its most valuable asset: the youth who make up more than 60% of the continent’s population. The 2019 World Development Report forecasts that the labour market in the future will require new skills such as digital literacy and fluency, problem-solving and creative thinking. It also allays the widespread fear that robots will usurp the need for human work.

Workplaces usually adapt according to new and different circumstances, and societies evolve which is why human life has been so successful in navigating the different vicissitudes of its history. Technology brings countless opportunities and surmounts the obstacles that occlude non-technological production patterns. In an increasingly globalised world, technological know-how is a necessity.

The African Union acknowledges that 4IR is a watershed moment for Africa’s development. Countries like Kenya and Rwanda have made appreciable strides in preparing their youth for digital economic systems and the future of work. However, the World Economic Forum reports that “more African countries are yet to take meaningful action to address the yawning skills-gap and digital infrastructure inadequacies bedevilling the continent.”

In Africa, the technological tussle between China and its detractors leaves the continent in what could be a significant quandary. Strategic economies such as Kenya, Nigeria, Egypt, Ethiopia, Algeria, Uganda and South Africa have shown a strong affinity with China’s technology, Western warnings notwithstanding. Nevertheless, the African Union has the responsibility of establishing the security features and safety issues surrounding the tech firms that are making inroads in China. In fact, the susceptibility to data theft brings to the fore the importance, not of technology expertise, but of innovation and invention.

Africa seems to be content with knowing how to use foreign-originated technologies rather than developing its own. For now, some realistic suggestions have been that, while the continent embarks on efforts to develop African-bred technologies, it should begin to create and advance its own search engines, and proactively engage Huawei on these terms. Africa cannot afford to ignore the technology that has already been developed by other players. However, it bears the responsibility of sifting through the murky tensions between technology inventors.

Both China and its detractors have blemishes that expose their knee-jerk approach to their efforts to win consumers over to their products. The West, for long a harbinger of globalisation and a believer in the universal applicability of its values, is becoming increasingly isolationist and on the retreat. More shockingly, it is demonstrating a sheer lack of confidence in its own values, norms and increasing technological prowess. While blocking Chinese tech companies from US markets through the “clean network policy”, its own tech companies are accused of harvesting big data from the developing world, a practice seen as “digital colonialism”.

Despite this, however, it still wants to export its technologies to the rest of the world. China, on the other hand, knows that it has benefited from globalisation. In response to US attacks on its technologies, China is promoting the idea of “digital sovereignty” favoured by Africa and much of the developing world. Africa is therefore caught between the US’s “clean network” and China’s “digital sovereignty” notions, raising questions about its own clear position on the raging technology wars of our time.

The UN75 will sit virtually for the first time entering the digital era. It remains untransformed with less global legitimacy to resolve technology wars. African leaders must raise in their UN General Assembly speeches the need for clear global rules, norms and values of governance for tech companies. DM

Dr David Monyae is the director of the Centre for Africa-China Studies at the University of Johannesburg and Dr Emmanuel Matambo is a senior researcher at the same institute.