Workers who 'stabbed and stoned' horses in labour dispu... 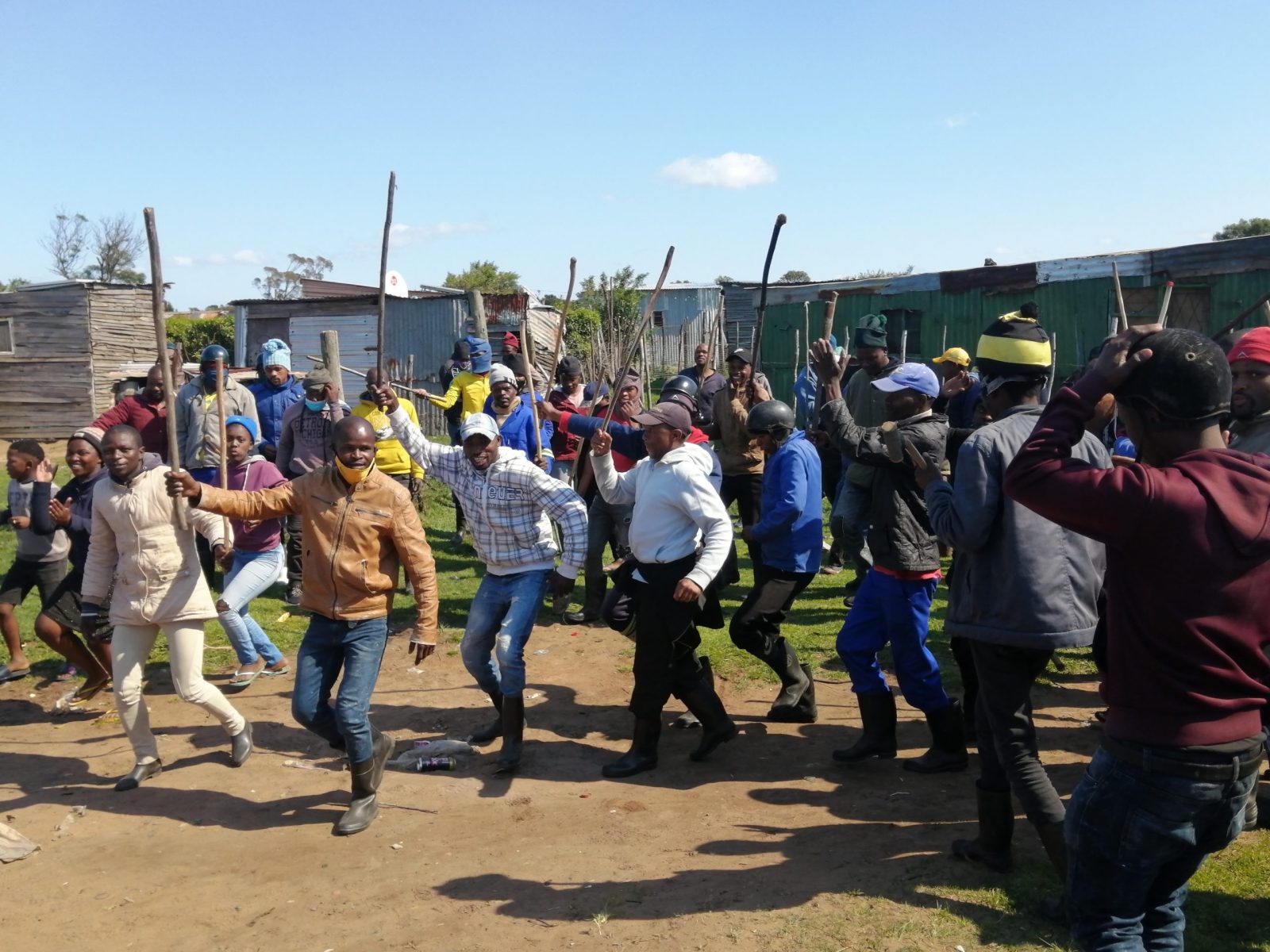 Some of the former employees of Dippin Blu Racing in Fairview, Port Elizabeth who stormed the stables in protest on Thursday, killing one horse and injuring over 20 others. Photo: Mkhuseli Sizani

The owners of Dippin Blu Racing in Fairview, Port Elizabeth, are considering legal action against a group of its former workers who stormed the stables on Thursday, killing one horse and injuring over 20 others.

“This is the worst day of my life. What they have done to my horses is barbaric… no human being should do that to animals. They stabbed and stoned my horses,” said a distraught Hedley McGrath, owner of Dippin Blu.

“One horse is dead and 29 are injured and traumatised. The vet will later determine the extent of the injuries.”

The conflict appears to stem from an incident in February, when a worker apparently injured a horse. McGrath says the worker stabbed a horse in the neck. However, other workers dispute this, saying he had accidentally cut a horse’s ear during grooming.

McGrath said: “All these [workers] looked after expensive race horses that wouldn’t even harm a fly. They came to me on 14 February after the incident happened on the 7th. They said ‘please boss, pay this guy so that he can go away’.

“I said I don’t pay someone who stabs my horse and no one can bribe me. He stabbed my horse in the neck and it nearly died. Then they decided to stay home and not come to work.”

However, Mbeko Kolisile, a worker at the stables, said: “In February one of our colleagues was busy cutting one of the horse’s hair. The horse jumped and he mistakenly cut its ear. Our boss got angry and fired him, claiming that the vet would charge him R13,000.

“We asked the owner not to fire him but to deduct the money from all of us because that mistake could happen to any of us. But he fired all of us instead.”

The workers then went to the Commission for Conciliation, Mediation and Arbitration (CCMA) in March, just before the national lockdown was implemented.

“During Level 4 of the lockdown, we went back to the CCMA and we were asked to lodge a new complaint. Our boss told us that we can go anywhere, but we will never win our case. We then decided to drop the case and ask for our UIF and service money because we were struggling financially,” said Kolisile.

On Wednesday 16 September, the workers went to the offices of the labour department in Port Elizabeth to apply for UIF, but were told they were not eligible as they had “absconded” from work.

The following day, the workers and other community members stormed the stables and began attacking the horses with stones, pangas, sticks and knobkerries. Police were called and dispersed the group with rubber bullets and stun grenades.

According to police spokesperson Priscilla Naidu, more than 150 protesters from the Fairview informal settlement freed about 28 horses from the stables early on Thursday. She said witnesses reported seeing the horses “running in all directions with their abusers hitting them with sticks and stones”.

Naidu said the injured horses were treated by the Animal Anti-Cruelty League. “A case of malicious injury to property has been opened and is under investigation,” she said.

After the incident, McGrath said: “We don’t owe them [the workers] a cent and we followed all the labour laws of this country. I have an order against them. Now I am busy with my legal team to see what is the next step.

“These horses are owned by prominent people who are now calling me to check on the safety of their horses.”

On the threats issued by workers that they would continue their protest and prevent any racing from taking place at Fairview racecourse, McGrath said: “My company just trains the horses… we have nothing to do with the race course.”

One newspaper reported that racehorse trainers and owners had voted to go ahead with Friday’s race meeting at Fairview. DM