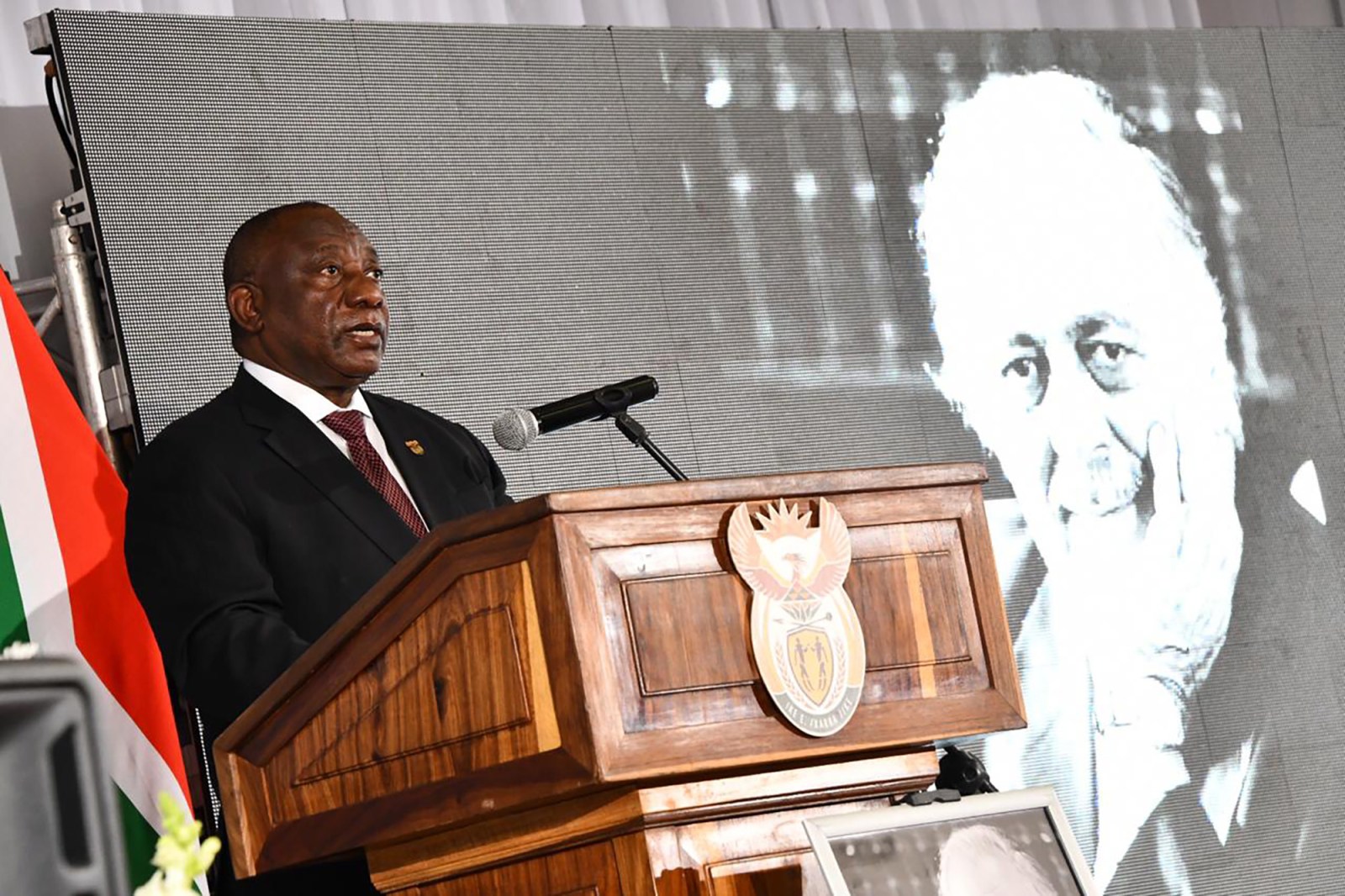 Human rights lawyer George Bizos was laid to rest in a Special Official Funeral at the Greek Orthodox Church in Johannesburg on Thursday. Bizos, who died last week aged 92, was remembered as a man of humility, integrity, and above all as an advocate with a passion for justice.

“Our family has shared our father with the nation for so many years: why should it be any different in his passing?” asked George Bizos’s son Alexi.

Bizos’s funeral saw luminaries of the political, legal and civil society spheres share space with friends and family members of the veteran advocate at an event which Alexi Bizos hinted had been a challenge to organise. Due to Covid-19 lockdown restrictions, the number of mourners inside the Greek Orthodox Church was limited.

Beyond that, as Alexi said, was the desire to pay tribute to Bizos in all the many roles he played during his 92 extraordinary years of life: as the pre-eminent defence lawyer of the Struggle, as a South African man who never forgot his proud Greek heritage, as a friend to many and a devoted family man.

“His life was so large,” his son said, his voice cracking at times as he read Bizos’s obituary.

One theme emerged consistently from the tributes to Bizos: the advocate’s unflinching commitment to doing the right thing.

“When it was not fashionable, particularly to white South Africans, George Bizos chose the side of the powerless,” said former chief justice Dikgang Moseneke, who got his own start in law as Bizos’s junior.

Drawing on Bizos’s memoirs, President Cyril Ramaphosa attributed his commitment to defending members of the anti-apartheid movement to Bizos’s own experience of “being a second-class citizen in the land of one’s birth” after he was forced to flee his native Greece as a refugee from the Nazi occupation.

“It astounded him that he, a refugee from Europe, had more rights in South Africa than the black majority,” said Ramaphosa.

“He could not and would not accept how he, a white immigrant, could be well-fed, clothed and educated while the native people of the country lived in squalor and deprivation.”

Though Bizos was well known for his special relationship with Nelson Mandela, mourners were reminded that he defended countless other Struggle activists too: among them Barbara Hogan, Winnie Madikizela-Mandela on more than 20 occasions, and the late Ronnie Mamoepa.

He also acted for those defending freedom and democracy in other countries, including the late Zimbabwean opposition leader Morgan Tsvangirai.

Moseneke said that Bizos’s support for his clients extended well beyond the courtroom. Bizos visited Mandela and other Robben Island detainees throughout their years of imprisonment, and “unfailingly provided support for [Mandela’s] family”.

Although Bizos never joined the ANC, so trusted was he by Mandela that he served as the late president’s emissary for discussions with the ANC in exile.

Speakers highlighted the fact that Bizos’s passion for justice did not dim with the transition to democracy.

“As though he had not done enough, George Bizos was there for the families of the miners at Marikana,” Moseneke said.

Ramaphosa described Bizos as acting “on behalf of the vulnerable” whenever “the democratic government fell short of its obligations, or when big business abused its power”.

Bizos was officially stateless for 31 years, both as a refugee from Greece and with the apartheid government of his new homeland determined to refuse him South African citizenship on the grounds that he was “not fit and proper”.

Yet he retained a great love for, and loyalty to, both countries.

Alexi Bizos said that when his father was asked who he would support in a soccer match between South Africa and Greece, “he would say he hoped it would be a draw”.

Bizos was remembered as a great teller of Greek tales. Moseneke reminisced about lunches at Bizos’s house, with salad picked from the advocate’s prized vegetable garden, where Bizos would hold forth:

The reason? “That way you quickly learn the going price.”

Among family members speaking at the funeral, Bizos was described as a man of deep humility who rejected materialism.

Bizos’s grandson Nicholas recounted visiting Greece with his grandfather some years ago, where the organisers of a talk Bizos was scheduled to give had offered to arrange a chauffeur to pick him up. Bizos declined, on the grounds that: “I didn’t want history to think I was so important I needed a car to fetch me.”

Reflecting on the grief of his grandfather’s passing, Nicholas said: “The problem with having someone as revered as Papou is that you come to believe he is immortal.”

Bizos was buried at Westpark Cemetery, with a South African flag laid over his coffin.

Ultimately, said Ramaphosa: “He was the embodiment of a fit and proper South African citizen.” DM