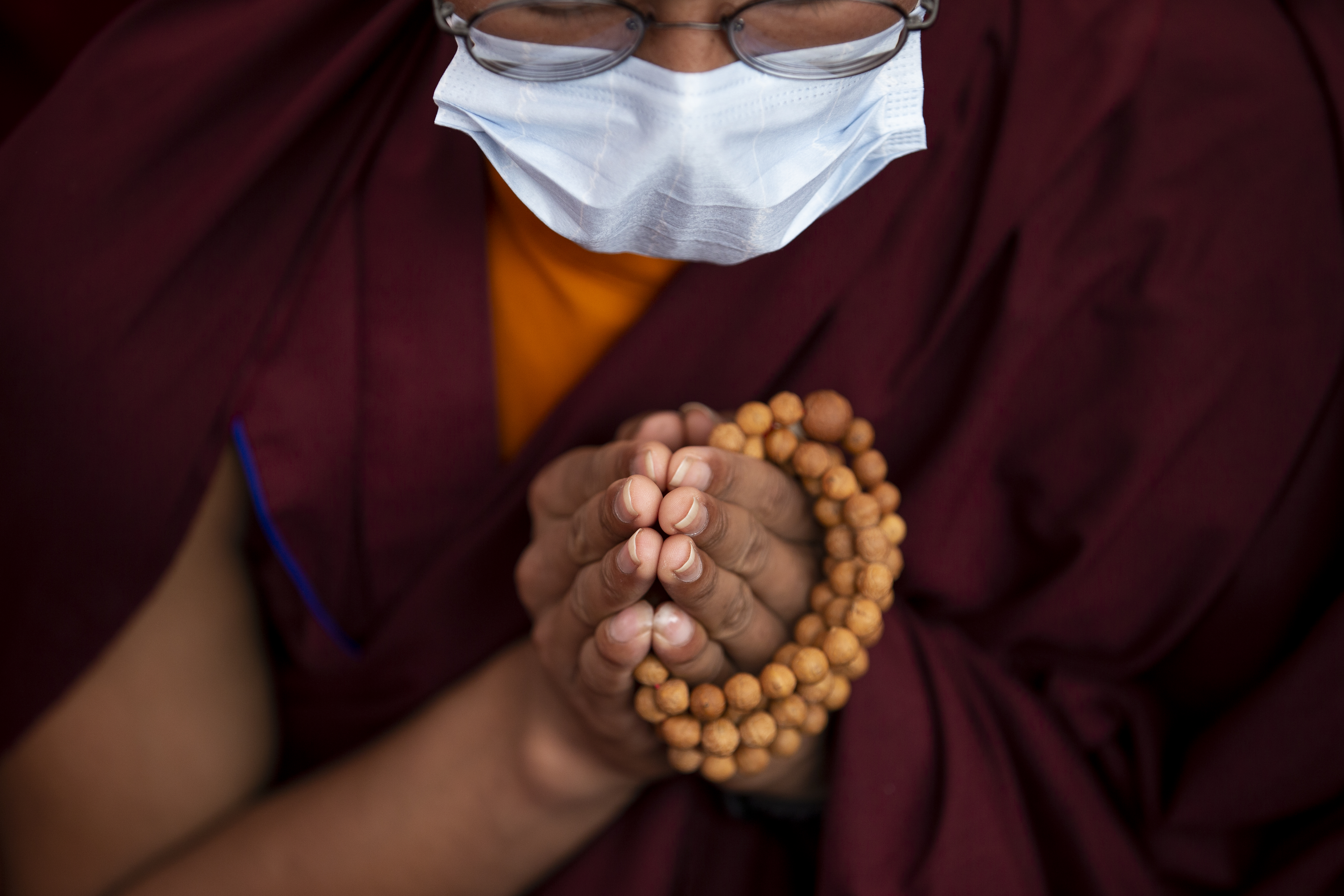 Father Michael Lapsley: "Let us have the conversation about corruption, about how to build an ethical society; about God’s dream for us all." (Photo: EPA-EFE/NARENDRA SHRESTHA)

The South African Council of Churches is among a group of civil society organisations that have demanded action against those implicated in Covid-19 corruption. This is a message delivered on Friday to the congregation of the Claremont Main Road Mosque: 'Every citizen and every faith community has a role to play.'

When you hear the word corruption, what thoughts come to mind? What feelings come into your heart? What impact does corruption have on how you pray?

According to Transparency International, corruption is the abuse of entrusted power for personal gain. Archbishop Thabo Maklouba used simpler language in his recent message to the President when he spoke of thievery and hypocrisy.

Today, we are an angry nation. Since all the recent revelations about Covid-19 corruption, the country has become more and more angry. The news of how some ANC bigwigs, and their relatives and friends have been enriching themselves at the expense of millions who go to bed hungry has caused outrage. It is obscene and a deep offence to our creator. Those who have siphoned off money for personal protective equipment (PPE) and food, which was meant to prevent starvation and save lives, are thieves and murderers, motivated only by greed.

How long will it be before the perpetrators are tried and found guilty, and sent to prison and the monies recovered?

We know from our holy texts and from history books that corruption is not new in the human family. Here in the Cape, we have the history of slavery. Slavery was a legalised form of corruption. Power was used to enable the few to be enriched at the expense of the many. Apartheid was there to enable the few to get rich on the basis of colour. Again, it was legalised corruption. Hundreds of unjust laws applied only to people of colour. These were bad laws that were also immoral. Corruption was the order of the day. The moral order was inverted. Good was called bad and bad was called good.

And yet, through the centuries, countless South Africans, known and unknown, women and men, lived moral lives and were not in any way corrupt. Many laid down their lives in the sure belief that one day there would be peace and justice for all. To join the liberation struggle was to know that it might cost you your life.  We joined anyway. We were people of every faith and included atheists, and agnostics, united in our common humanity and our dreams of a more humane world.

However, we would be romanticising the past if we did not acknowledge that within our ranks, there were also murderers and thieves.

The birth of democracy brought its own temptations. Some who were scoundrels before continued to be scoundrels after. Some, once were warriors, but sold their souls on the altar of greed and corruption. At the dawn of democracy, our own intelligence agency told government that the greatest threat to peace in South Africa was not military but poverty, unemployment and inequality. So, what did we do, we stopped the RDP (the Reconstruction and Development Programme) and instead, we bought arms that we did not, do not and will not ever use. From the beginning, the arms deal was mired in bribery and corruption

Then there was State Capture, but still no convictions in our courts. Fast forward to Covid-19.

The money that was supposed to save lives and feed the starving was siphoned off and there was a feeding frenzy for “comrades”. With a State of National Disaster, our National Treasury removed more of the checks and balances that were already insufficient and provided an enabling environment to the looters.

In the midst of our anger, it is easy to be self-righteous. As President Cyril Ramaphosa has said in the dock of corruption, the ANC is accused No 1, but it is not alone. Even at grassroots level, there were instances of fraud and corruption with those who put more food parcels aside for their own family than they gave to others.

I recently heard about a woman who sold her house and gave the money to a bogus estate agent to buy another, and is now homeless. Another friend enrolled for an entrepreneur training programme with a monthly stipend from SETA via an NGO. When the stipend was not forthcoming and my friend complained, the NGO tried to intimidate him with a lawyer’s letter.

We should not underestimate the role of conscience, that little voice that tells us what is right and what is wrong, the voice that became louder during the silent months of lockdown. I have no doubt that if we see Ramaphosa rapidly moving from verbalism to action in the fight against corruption, he will find the nation once more swinging behind him. One of the greatest bulwarks against corruption are people with moral integrity.   Those without integrity will, as they have done hitherto, continue to hollow out key state institutions. As faith communities, what are we doing to help young people develop good morals and compassion for others?

As my friend Nora Ramsden says: “We learn empathy, cooperation, responsibility and ethical behaviour” in our homes, long before we go to “big” school. We learn through play-acting with adults as well as other children and through stories and so on… Education through play. When it comes to moral integrity, our children will not look at what we say but at how we live our lives. And Barbara Schreiner says: “Recognise, celebrate and value those who are not corrupt; punish those who are corrupt starting from the highest not the small fry.”

The Scorpions were disbanded, not because they were ineffective but precisely because they were becoming more effective every day. There have to be more checks and balances to prevent corruption. Key issues are independence of law enforcement agencies, transparency, accountability and ongoing vetting for moral integrity. Should we not, as faith communities, on important days, welcome and honour whistleblowers?

It seems that the more people are seduced by the idols of wealth, status and power, the more they lose empathy and compassion. So, part of the antidote to corruption has to include, as my friend Horst Kleinschmidt, asserts: “Equality across our society. And for government to become serious about equal education.”

Which societies in the world are the least corrupt? Denmark and Sweden compete to be number one. I asked a South African friend living in Denmark why he thought Denmark was doing so well in relation to corruption. He spoke of the level of equality and how those who are more well off do not flaunt their wealth because their sense of self-worth does not come from what they have, but who they are. He also spoke about how the weakest are treated and included, especially those with disabilities, and he spoke of a democracy where there is space for all voices.

The Ahmed Kathrada Foundation has been spearheading and also supporting the Active Citizen’s Movement’s Orange Mask Campaign. Let us also support this campaign to help mobilise the nation to fight corruption everywhere. Dr Frank Chikane has also said that the campaign against corruption must engage every town, village, street and household. But let me add a cautionary note. While we need to mobilise every citizen and every faith community to be against corruption, we need to have our eyes wide open. There is a verse in the Christian Scriptures that says: “the children of darkness are often shrewder in their time than the children of light.”

In the face of mounting national anger, there will be populist figures who will seek power appealing to our deepest fears and prejudices, and not for the common good of all people. We have witnessed this recently across the world, with the rise of authoritarian leaders full of populist rhetoric, pandering to the shadow side of people.

During my years in the liberation struggle, I learnt that it was important to keep asking the two questions: 1. What are we against? 2. What are we for?  As time passes, we will need to keep reframing these questions. So yes, we are against corruption. We want to see corrupt leaders wearing orange jumpsuits sooner rather than later. We are for transparency, for accountability for integrity, for ourselves, for our leaders in politics, in the private sector and within the faith community.

We want more and more equality. We demand an end to violence by men against women and violence against children. We want to be able to live lives of dignity. We demand leaders who are trustworthy. We want to live in harmony with Mother Earth. We need food sovereignty. We need ubuntu economics.

What is the world of your dreams, for yourself and your children, and for generations to come? As a person of faith, I like to ask the question, what is God’s dream for us as God’s children? How can I participate in God’s dream? What is our answer as the children of Abraham as Muslims, Christians and Jews… with people of other faith together with those who are not at all religious?

If what we claim to be from God is characterised by fear and hatred, it is probably not from Allah, but a projection of ourselves. The prayer I make most often for myself is for wisdom and courage. I have the same prayer for each of you.

Let us have the conversation about corruption, about how to build an ethical society; about God’s dream for us all. Let us have that conversation in the mosque, in our places of worship, in our workplaces, in our families, in our hearts. Let it be part of what we share with Allah in our prayers today and everyday. May we have ears to hear what God requires of us. And it will be: Inshallah. DM

Father Michael Lapsley is an Anglican priest, social justice activist and founder of the Institute for Healing of Memories.  He is a former Vice-president of the South African Council of Churches. His address was livestreamed on the Claremont Main Road mosque’s social media platforms on 4 September 2020 at 1pm.

Shabir A Madhi
Save 6 mins