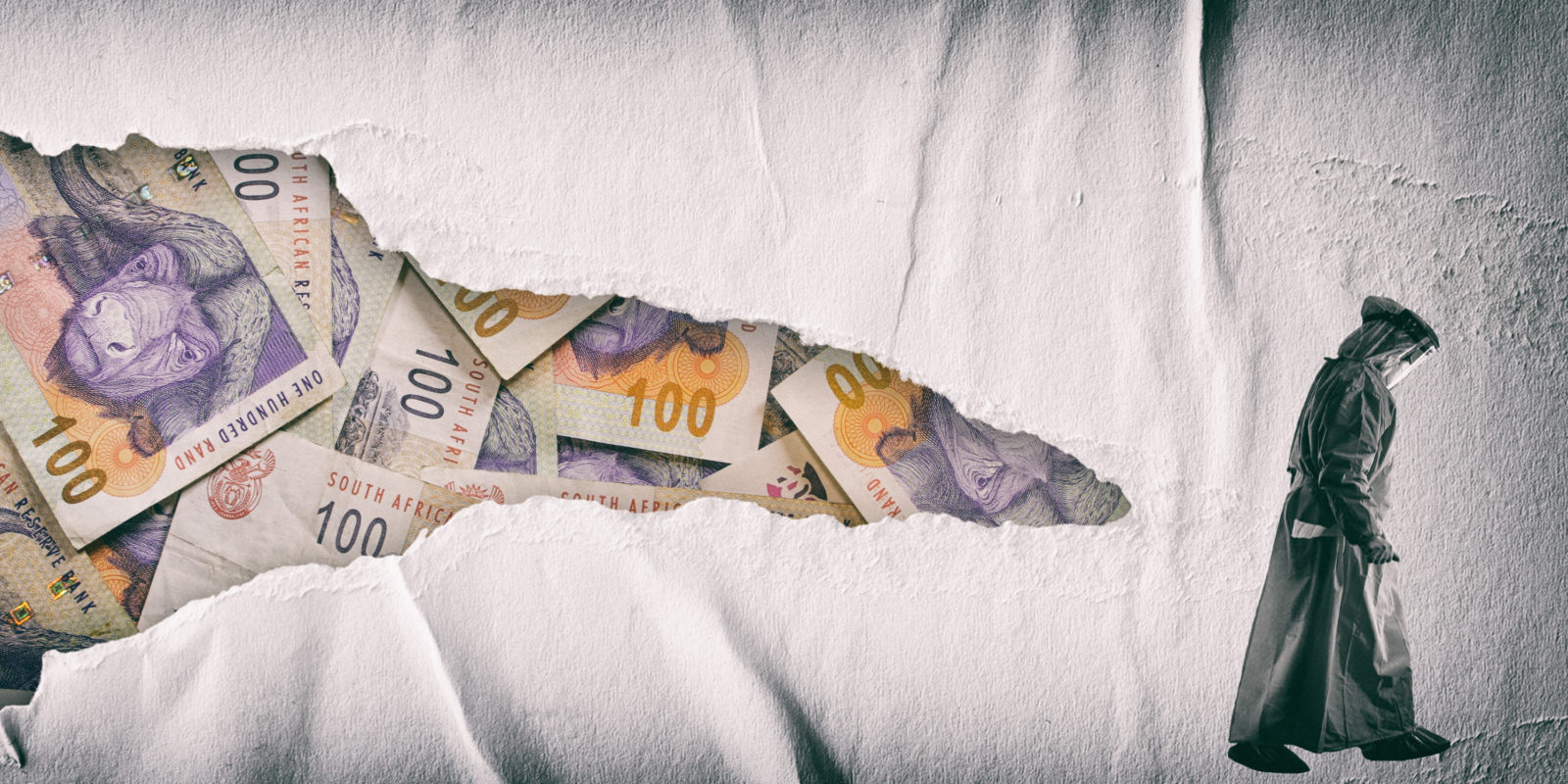 The first of the SIU’s six-weekly reports on Covid-19 PPE tenders that President Cyril Ramaphosa said he would receive, is due in the first week of September. (Illustrative image: Gallo Images | Sharon Seretlo) / Adobe Stock / Rawpixel)

To put the SIU investigations into perspective: their overall value is just under half the R10.38bn Covid-19 expenditure, according to the National Treasury.

To put the SIU investigations into perspective: their overall value at R5,083,478,584 is just over half the R10.38-billion Covid-19 expenditure, according to the National Treasury.

It’s not a straightforward comparison, as the National Treasury figure for national and provincial Covid-19 spending runs from April to July, while the SIU values run from January to 23 July. And when the Treasury provided Parliament’s finance committees on 5 August with that R10.38-billion Covid-19 expenditure – R3.58-billion nationally and R6.8-billion in provinces – the documentation made it clear, for example, that police, defence and Free State had not provided data.

But the comparison, alongside Finance Minister Tito Mboweni’s repeated observation of how the thieves were waiting at the door, underscores the extent of corruption, fraud, irregularities and maladministration.

It’s unsurprising that public outrage and pushback erupted, also over how the Covid-19 tenders benefited the politically connected. This may explain the speed with which the government has reacted – from President Cyril Ramaphosa announcing the SIU probe in his 23 July address to the nation, and the Cabinet decision of 5 August to establish a ministers’ task team to compile a comprehensive list of Covid-19 contracts.

Parliament is set to schedule an urgent debate on national public interest on Covid-19 tender related corruption, as requested by the DA.

On Wednesday, the Standing Committee on Public Accounts (Scopa) chairperson, Mkhuleko Hlengwa, in his opening remarks aligned the committee with the public expression of “disgust and anger at corruption in the Covid PPE contracts…”

Speed and urgency were needed “to clamp down on this corruption”, added Hlengwa. “If we do not respond to the genuine concerns about corruption by South Africans, we would have failed.”

SIU boss Andy Mothibi agreed, saying the unit’s provincial teams have been working flat out since the presidential proclamation of 23 July. Tip-offs of further Covid-19 contract malfeasance are still being received – and considered for investigation.

However, the SIU can only institute civil proceedings to try to recoup losses to the state. It may not initiate criminal proceedings, but must refer such cases to prosecuting authorities.

In Gauteng, the SIU is probing 157 companies and contracts worth R2.2-billion; in Free State, 11 contracts worth R52-million; while in KwaZulu-Natal 79 Covid-19 contracts worth R557.6-million are being looked at. In North West, three departments are under scrutiny for contracts of at least R16.4-million, alongside two municipal tenders totalling R11.5-million. Mpumalanga’s Health Department is under investigation for six contracts valued at R18,948,023.33, while in Limpopo, Sekhukhune District Municipality is being probed for R26.3-million in questionable Covid-19 expenditure.

In Eastern Cape, at least 347 Covid-19 tenders worth R1.9-billion are under scrutiny.

This includes the contract for tablets, now valued at R740-million, where Scorpio highlighted massive mark-ups. The provincial health department is under scrutiny for 239 Covid-19 tenders worth R622.4-million, including the ill-fated “scooter ambulances” that cost R10-million for 100 motorcycles that did not meet minimum standards for patients’ transport.

In the Western Cape, three provincial contracts: one by Health (R9-million), one by Education (R111,826,721.55), a still to be valued contract by Agriculture, and two municipal contracts of R800,000 each are being investigated. MPs were told one probe revolves around false hand sanitisers, where “one service provider stole the labelling from another”.

The R40-million Beitbridge border fence contracted out by Public Works is part of the SIU investigations, as are Labour contracts of an as yet unspecified amount, R40-million of Education contracts and R53.9-million worth of Covid-19 tenders by Correctional Services.

Also underway is a probe into Water and Sanitation’s deployment of some 17,000 tankers.

“We received information from whistle-blowers,” confirmed Mothibi to MPs. “They even sent video clips where these tanks are parked. In the middle of the road, they spill it [water] maybe deliberately… to refill. There really is a need to look at this.”

That’s not quite what emerged before the parliamentary Water and Sanitation Committee on Tuesday where the department presented its Covid-19 contract numbers.

Departmental documents showed contract values and suppliers for anything from water tanks and PPEs, but not necessarily together. Supplier names linked to contract values emerge only in one section because some contract amounts were reduced, alongside the explanation: “The supplier could not deliver as initially committed by them.”

Home Affairs, in 441 transactions, spent R17,332,281.31 of its available R23.4-million PPE budget by the end of July, according to documentation provided to MPs. A detailed list of suppliers, type of PPE and quantity and overall costs also was supplied.

Like Tourism, which also has published its Covid-19 contracts on its website, Home Affairs already has submitted this information to the ministerial committee.

Chaired by Justice Minister Ronald Lamola, that committee of six must “look into corruption in the procurement of goods and services sourced for the purpose of containing and responding to the COVID-19 pandemic”.

Established at the 5 August Cabinet meeting, the president fired off a letter to all ministers and premiers to provide this information “as a matter of urgency this week”, which ended on Sunday 9 August.

“The committee will prepare a comprehensive report which the President intends to release as public information,” said a Presidency statement.

Aside from the various departmental Covid-19 contract lists that this week emerged in Parliament, to date two provinces have released their Covid-19 PPE contracts from April to July.

Gauteng’s disclosure report appears to be largely lists of suppliers and payments, which, as Maverick Citizen reported, have raised more questions than answers. The Western Cape report also comprises lists according to each department, but the information includes not only the supplier name, but also units of PPE, unit costs and overall total payment.

Meanwhile, DA MP Geordin Hill-Lewis has called on the National Treasury to say what, if any steps, it has taken to end emergency Covid-19 procurement as undertaken when it briefed the parliamentary finance committees on 5 August. This lack of transparency was of concern, he said in a statement:

“‘Covidpreneurs’, who took advantage of a national health crisis to enrich themselves through irregular access to tenders, must be brought to book and face the consequences of their corrupt behaviour.”

The first of the SIU’s six-weekly reports that Ramaphosa said he would receive, is due in the first week of September. And on Wednesday Mothibi told MPs this report would include a note to make the information also available to Scopa.

The ministerial committee will brief Scopa on Friday on progress in compiling the Covid-19 contract report – and possibly indicate when, as promised, this information will be made public. DM