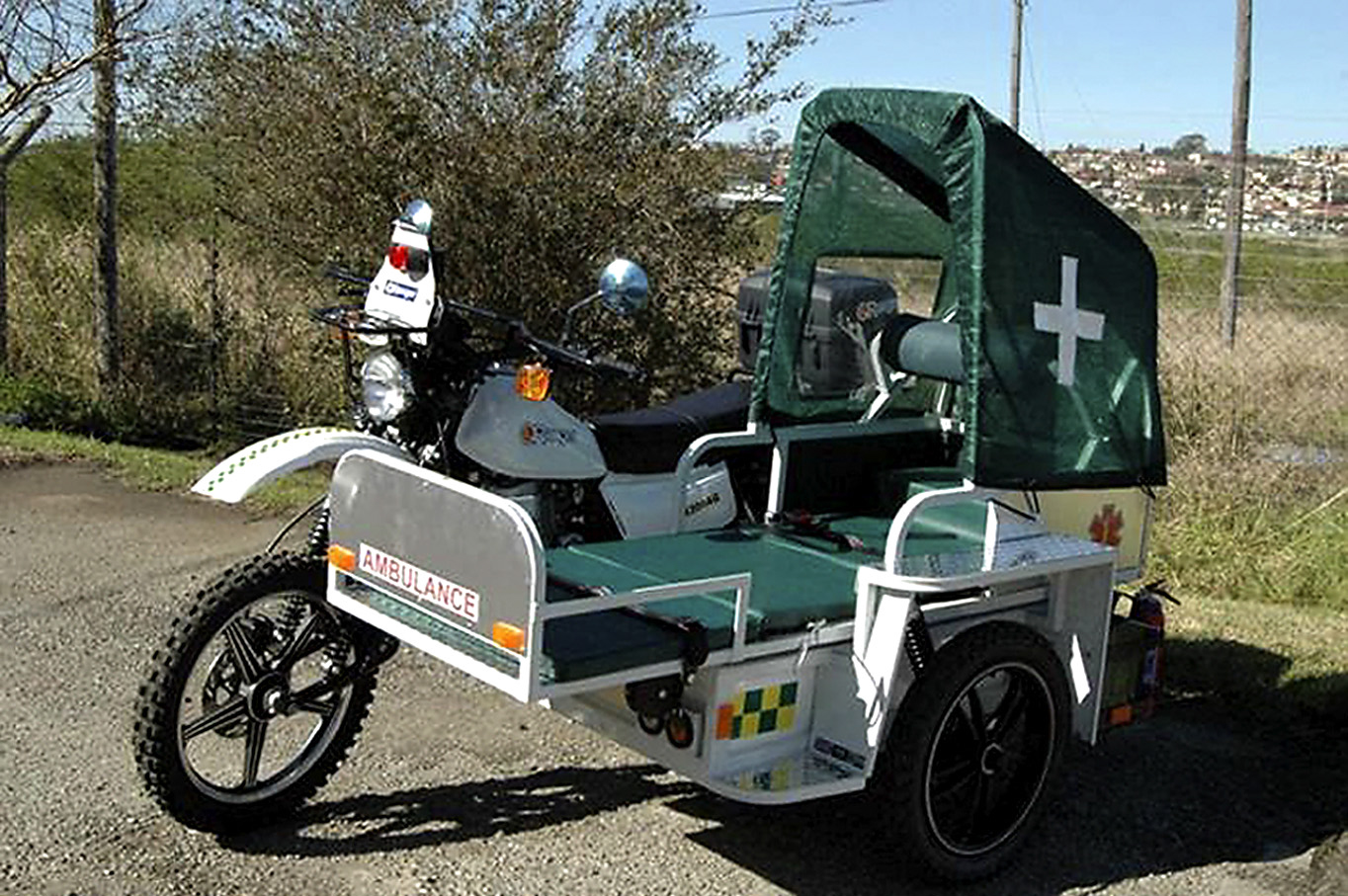 A prototype of the motorcycle and sidecar that were to be provided to the Eastern Cape Department of Health. (Photo supplied)

As evidence emerges of a hastily organised launch, using the wrong vehicles, the Eastern Cape Legislature’s Health Committee has asked that the controversial project to provide motorcycles to healthcare workers be halted until their concerns are addressed.

The Eastern Cape Department of Health has put a hold on their order for 100 motorcycles with mobile sidecar clinics intended for use in the province’s rural areas.

Eastern Cape Department of Health communications director Siyanda Manana said that, given the “public discomfort”, they have delayed issuing an order for the motorcycles but still have a contract with the company, Fabkomp, that will be manufacturing the vehicles.

“The bid adjudication committee is taking another look at the processes so that in the event that we are challenged we can be assured of a process that can withstand legal scrutiny,” he said.

“We are engaging with the stakeholders and specifically with the health portfolio committee to ensure we find common ground.”

The chairperson of the Eastern Cape Legislature’s Health Committee, Xolile Dimaza, said they had been alarmed to suddenly see the procurement of the motorcycles for use by health workers.

“We must receive an annual report and an annual performance plan. The department must tell us how they will use the money that they have been given. The motorcycles were not in any of their reports. It wasn’t in the performance plan. We were not given anything to approve,” he said.

“Then suddenly the scooters appeared on page 15 and 16 of the MEC for health’s policy speech.”

“We said to them, if it is not in the annual performance plan it is as good as if it has never been written.”

He said their second point of concern was that the Eastern Cape government’s fleet management policy was that procurement is done by the Department of Transport.

“They are the ones who are buying ambulances and then hand them over. Our question was, why have you excluded the scooters from fleet management? Up to now, the Department of Health has never answered us.”

He said the portfolio committee had conducted an oversight visit at the Fabkomp factory two weeks ago.

“I said to the owner, Brian [Harmse], you are under oath. You must tell the truth. Then the story came out that scooters used for the launch were ones meant for Kenya. The department has not given an order up to now.

“I must make it clear that we fully support primary healthcare. We are fully aware of the geography of the Eastern Cape and that there are roads where no ambulance or car can go. But we could not give the go-ahead. The scooters had not been budgeted for.”

He said he was not aware that the motorcycles were specifically ordered for use during the coronavirus pandemic and added that Health MEC Sindiswa Gomba correctly told the committee that the vehicles will be phased in over the next few years.

The R10-million for the motorcycles was, however, reflected as an “order placed” in a procurement document to detail the Eastern Cape government’s spending during the pandemic. In the description, the department wrote that they were to be used for tracing teams. What followed was a chaotic launch that caused much confusion as described by Harmse in a document provided to the portfolio committee.

“The cost of the ambulance version is R68,811 as showcased at the launch. There was a unit mentioned in the media that was on offer for R17,000. We did a check and found that someone had taken a picture from our website and used this with the price of R17,000. We found that there was no link to any company or website that could offer any details of the unit on offer. We assume it was a scam…”

On Thursday in a response to a written question in Parliament, Mkhize said the motorcycles “do not meet the basic criteria for patient transport as an ambulance”.

“The purpose of the project by the Eastern Cape Department of Health is mainly for widening access to primary healthcare and delivering chronic medicine to the most remote areas of the Eastern Cape.

“The national Department of Health was not consulted on specification before procurement of the scooters. However, the province has been advised that none of these scooters will be used as ambulances because they do not meet the specific requirements as provided for in EMS regulations,” he said.

Harmse said he had no problem with the tender being reviewed.

“We have not received any money and we do not have an order number,” he said.

“We cannot start manufacturing the units until we receive an order number. We have other countries making inquiries and there is a possibility that Nigeria will order 68 units shortly and they will pay cash upfront. Whoever places the order first will get the 85 that we have in stock.”

He added that the demo units used in a highly publicised launch in East London had been shipped to Kenya.

In his report to the portfolio committee, he said they had received a request from the Department of Health on 9 June to have a “showcase ready by the Friday [12 June].

“We never had any bikes ready and we informed the department that we had four ambulances ready to go to Kenya completed and our two demo units, one ambulance and one clinic. We were then asked to have these six units available on the Friday, which we then presented on the day. The problem, I believe, was that there was no clear instruction on how to manage the proceedings as I presented what was there on show, including the clinic. The test drives were in the ambulance unit, but the order [placed by the Department of Health] was for the mobile clinics.”

He said each mobile clinic costs R82,250 with an additional maintenance contract.

“The cost of the ambulance version is R68,811 as showcased at the launch. There was a unit mentioned in the media that was on offer for R17,000. We did a check and found that someone had taken a picture from our website and used this with the price of R17,000. We found that there was no link to any company or website that could offer any details of the unit on offer. We assume it was a scam. We have no patent on the units we manufacture and anyone can compete against us and all competition is welcome.”

He said the department had never ordered the ambulance version of his product. DM/MC