Education officials in the Eastern Cape seemingly relied on grossly inflated prices to justify controversial lease deals for tablets and virtual classrooms that will cost the province an eye-watering R538m. The contracts were awarded to Sizwe Africa IT Group, a subsidiary of businessman Iqbal Survé’s AYO Technology Solutions.

The Eastern Cape Department of Education (ECDoE) used a presentation riddled with massively inflated prices and questionable accounting methods to justify its decision to lease tablet devices and equipment for virtual classrooms at a cost of more than half a billion rand.

Critics of the deal are questioning why the department chose to rent the tablets and other equipment instead of buying it.

In recent submissions to the provincial legislature, the department argued that it would have cost taxpayers R53-million more if it had decided to buy the required equipment.

Prices for some of the products needed for the virtual classrooms included in the ECDoE documents, for instance, may have been inflated by more than 400%.

A presentation submitted to the provincial legislature’s Portfolio Committee on Education reveals that the ECDoE will spend R538-million over three years to lease 55,000 tablet devices and equipment for virtual classrooms aimed at Grade 12 pupils. The deal includes SIM cards and data costs.

Daily Maverick, in May 2020, revealed that the ECDoE had avoided normal tender procedures when it awarded a R160-million contract for the virtual classrooms solution to Sizwe Africa. The department seemingly used the Covid-19 lockdown as a reason for fast-tracking the procurement process. The e-learning package makes provision for a R27-million rebate to the department, meaning Sizwe Africa’s revenue on the virtual classrooms will come to R133-million.

In its submissions to the provincial legislature, the ECDoH claims that the entire initiative would have cost taxpayers R591.5-million if it instead chose to purchase the tablets and equipment for the virtual classrooms. This is R53-million more than the lease option.

However, there may be serious flaws in the way the department weighed the supposed cost benefits of the lease option against an outright purchase.

According to the ECDoH submission, an outright purchase option for the virtual classrooms would have cost R172.7-million, as opposed to Sizwe’s R133-million lease plan.

But Scorpio found several line items in the department’s cost estimates for the virtual classrooms that appear to be grossly inflated. This may have resulted in Sizwe’s lease option appearing significantly more attractive.

At the very top of the ECDoE’s cost comparison, for instance, one finds an 86-inch interactive touch screen sourced from Chinese manufacturer EKAA. The department claims it would have paid nearly R225,000 for each of the 13 units needed for the classrooms, but Scorpio managed to find them for sale at a cost of only R44,274. This equates to a massive 407% “markup”.

Several of the other products listed in the ECDoE submission were seemingly also subjected to significant price hikes. (see graphic) 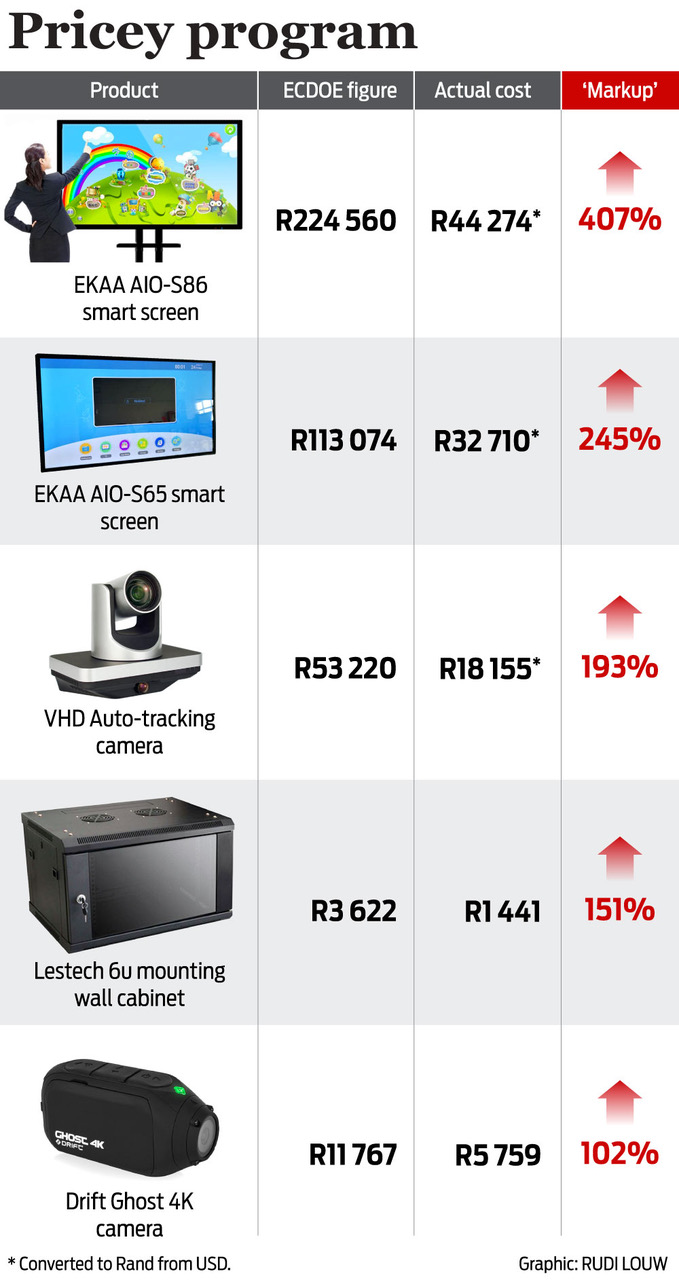 The department did not offer a reason for why these prices appeared to be inflated but instead claimed that it was unfair to compare the lease options to “shelf-prices”.

“The Department therefore refuses to respond to speculations on prices based on random websites using unsubstantiated specifications. An ‘apples to apples’ comparison is recommended to verify the fairness of the prices,” it said in its statement.

Another potential flaw in the department’s comparison between the lease option and an outright purchase is the manner in which it factored value-added tax (VAT) into its calculations.

In its submission to the provincial legislature, the department says it would have paid R3,499 for each of the 55,000 Samsung Galaxy tablets it needed. In other words, it would have forked out R192.4-million. But the department also added 15% VAT, or R28.8-million, to this figure. The problem with this approach is that the R3,499 price tag, which is at the upper end of the standard retail price for these devices, is very much inclusive of VAT. The R28.8-million should therefore not have been added to the cost calculations for a purchase option.

This possible VAT miscalculation may have been factored into the entire range of products needed for the e-learning project and could have resulted in the purchase option appearing significantly more expensive than it would have been.

The department did not respond to our queries regarding the VAT issue, but it was adamant that the lease deal was the better option.

The department added that its dire financial position also played a role in its decision.

“It is a known fact that government finances are strained, and departments have to be creative in the manner in which they utilise limited resources without compromising service delivery. A lease procurement enables the department to make staggered payments over a period of 36 months. This puts less strain on the finances of the Department, and enables it to diversify its finances and fund other priority programs,” it stated.

Hanno van Dyk, Sizwe Africa’s chief operating officer, vowed to take Scorpio “through some basic accounting on each item” for the products listed in the cost comparisons, after the ECDoE had responded to our queries. However, he ultimately failed to do so.

“I believe the department has scheduled a media briefing for tomorrow [Friday 24 July]… I will not comment or respond to any other requests,” Van Dyk said in an email.

Before his final email, Van Dyk claimed Scorpio was “trying to compare an outright purchase against a discounted rental which includes insurance and finance cost”. DM