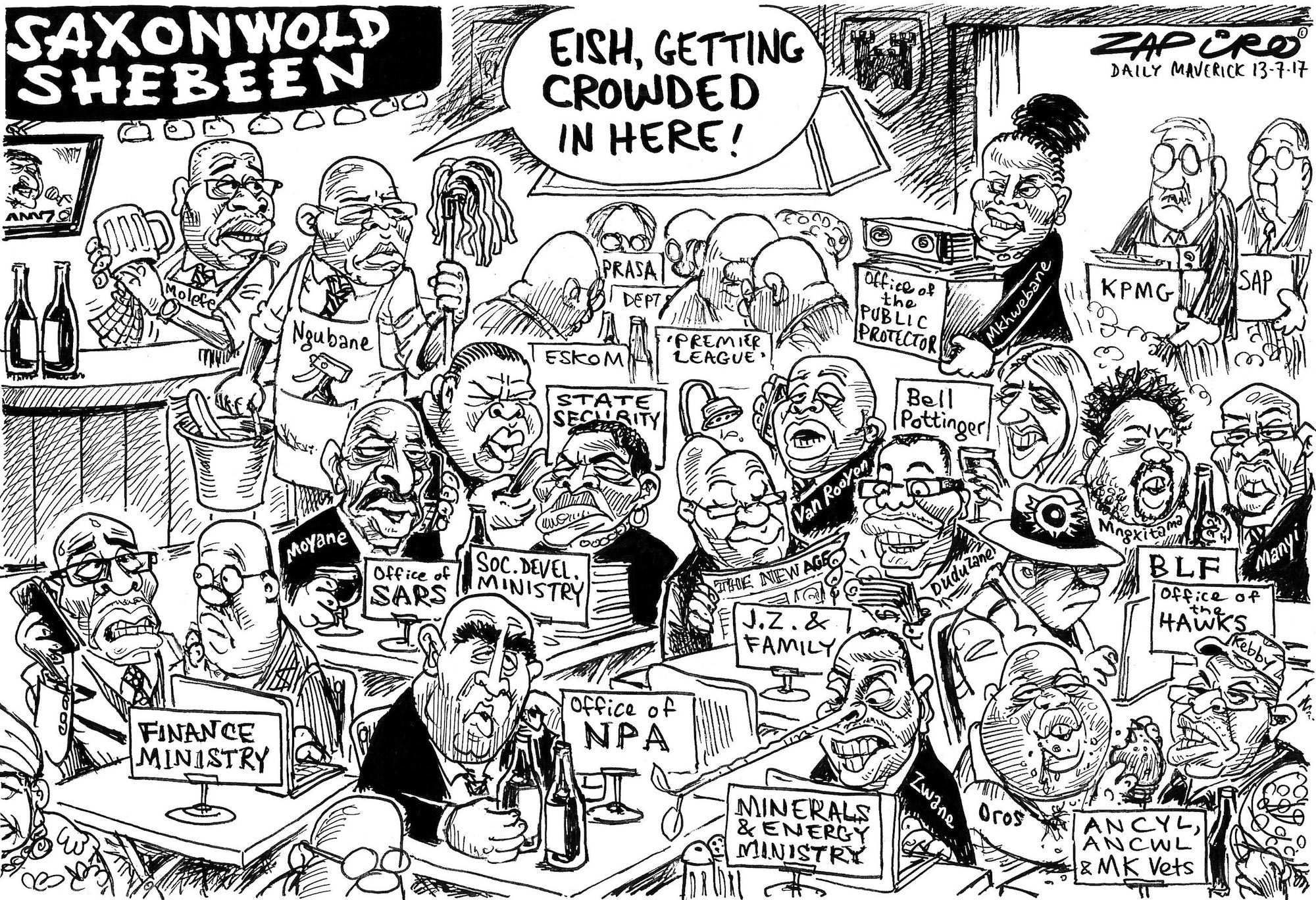 Three witnesses have told of high-ranking officials visiting the Gupta home in Saxonwold, Johannesburg – and leaving with bags of cash.

Malusi Gigaba, Siyabonga Gama, Garry Pita, Brian Molefe and Anoj Singh all, at various times, came out of the Gupta family’s Saxonwold residence carrying bags of cash, three witnesses testified at the Zondo Commission of Inquiry into Allegations of State Capture on Thursday.

The witnesses say their lives are in danger, with one being SMSed that he should stop giving evidence or “your family won’t find a piece of you”.

They testified in camera with their names redacted from any affidavits given. They were also given extensive protection while they were testifying, said the chairperson of the commission, Deputy Chief Justice Raymond Zondo.

Witness 1, a security officer at Transnet, testified about former Transnet chief financial officer (CFO) Brian Molefe and his trips to the home of the Gupta family in Saxonwold, Johannesburg, and to the Midrand offices of Gupta family business Sahara Computers, and hotels including the Michelangelo, Protea Hotel and the Fire and Ice in Melrose Arch.

Witness 1 recalled about 14 trips to meetings with the Guptas, either to Saxonwold, hotels or Sahara Computers. Eventually, he needed to get another person to help him, since “the hours were too long”.

Witness 1 said the person they visited in Saxonwold was Ajay Gupta. Molefe would sometimes carry a light brown backpack with him when he visited the Gupta home. On 18 January 2012, the witness alleged, Molefe “instructed me to deliver a bag to Mr Ajay [Gupta] at Sahara Computers in Midrand”.

On one occasion, he said, he saw R200 notes in bundles in Molefe’s bag after he was asked by Molefe to collect his cellphone in the bag.

“I asked him about the cash… he said it was none of my business.”

The witness said he was asked by Molefe or Molefe’s personal assistant to deposit sums of money – between R5,000 and R20,000 – into various bank accounts between the 28th and the 5th of a month.

He said he had been followed on three occasions and had been sent several threatening messages before testifying at the commission. In 2018, he received a message that stated “we know where you live”, and in 2019, he said, he received another one that said if he knew what is good for him, he would not give evidence before the commission.

On 13 January 2020, he received another SMS, which said: “If you love your life, I advise you to resign and disappear. Stop it with your moronic superman behaviour. We are watching your every move, your conversations. Act sensibly and give this matter your most urgent attention. When we are done… your family won’t find a piece of you”. The witness said he reported the incidents to the South African Police Services.

Witness 2 then took the stand from an undisclosed location.

This witness was the security officer for Transnet Group CEO Siyabonga Gama, who had previously been implicated in wrongdoing at the state-owned enterprise.

How Gama drove Transnet off the rails

Witness 2 said he would make trips to the Gupta home in Saxonwold in Gama’s official and private vehicles, which would not be recorded in their logbook.

On one occasion, he saw Brian Molefe at the property and on another, he saw Thamsanqa Jiyane, a former Transnet Freight Rail chief procurement officer, who told him in isiZulu, “I [Witness 2] am exposed to the shady stuff they do”.

In November 2016, during a visit, Witness 2 said Gama told him that somebody else would bring him something in the car. In the space of 10 minutes, Witness 2 said, “a relative of the Guptas handed me a suitcase that I placed in the boot of the vehicle”. Later, he was asked by Gama at a hotel to place a bag into the boot of Jiyane’s car while the two of them were having drinks. When he opened the bag, he saw bundles of cash in R50 and R100 notes.

“I then zipped it up and placed it where I was instructed to, locked it up and returned the keys”. He did not tell Gama or Jiyane about what he had seen.

The witness said since his reinstatement at Transnet, he had seen drones around his house and had received threatening messages persuading him not to give evidence “whether it be in this commission or after I was reinstated at Transnet”. This was reported to the police, the witness said.

Witness 2 said he would often drop Gama at the African Pride Hotel in Melrose Arch to meet with Salim Essa – another Gupta associate. In June 2017, Gama asked him to collect a “parcel” from Essa and then drive Gama to Bryanston, where they met up with another person. Then, Gama and the person started counting the cash that had been given by Essa. Gama gave Witness 2 R50,000 in cash.

“He just gave it to me… he didn’t give me any instruction, I took it and said thank you,” said Witness 2.

Gama then told him to drive him home in Kyalami.

On another occasion, he drove Gama to Essa to pick up a parcel, which, Witness 2 said, was a “stack of R200 notes”.

But then Gama and Witness 2’s relationship soured.

“It came to my attention, he had mentioned to my senior managers that I stole money from him,” said Witness 2. On one occasion, he found “not more than R100,000” in a spare wheel compartment of Gama’s car while he was doing maintenance” and on another, in a medical kit, he found again, “almost R100,000” at a meeting with CEOs of SEOs, organised by “a former minister”.

“The relationship became strained because I could not execute instructions from a third party, an associate of Mr Gama, which he was not very happy about.”

Gama accused Witness 2 of witchcraft – he said he’d seen video footage of the witness spraying something on the lawn of his home. Witness 2 resigned from his job, but this was rejected. He was faced with a disciplinary process and hearing and was then fired. This dismissal, Witness 2 said, was unfair and he was reinstated.

The witness said since his reinstatement at Transnet, he had seen drones around his house and had received threatening messages persuading him not to give evidence “whether it be in this commission or after I was reinstated at Transnet”. This was reported to the police, the witness said.

Witness 3, who had been a security official at Transnet, but was later seconded to the Department of Public Enterprises, then gave evidence.

He told the commission that while Malusi Gigaba was minister of public enterprises, Gigaba made several unscheduled visits to the Gupta family home. There were about seven visits between July and December 2013, he said, which at Gigaba’s request, were not recorded in the required logbooks for state vehicles. The witness said that on six occasions he had driven in the car behind Gigaba, but on the seventh time, “I drove him alone”.

He told the commission he would drive Singh to Knox Vault in Kyalami after visits to the Guptas. According to the witness, Singh would take full bags into the safe deposit box facility and come out with the bags empty.

He said that on one occasion, Gigaba had wanted to buy lunch for his security detail, and he saw a bag in the official vehicle of the minister, which he described as “some stack of bundles of money inside with R200 notes”. According to the witness, Gigaba would pay cash at restaurants and “pay cash for his tailored suits”.

In 2014, the witness, while working at Transnet, was assigned to be the security official for new CFO Anoj Singh, a known Gupta associate. He said he’d taken Singh to the Gupta residence more than 10 times, with these visits lasting 20 to 30 minutes. The witness said he had seen Singh carrying a bag on more than 10 occasions, but only once saw a bag with money in.

He told the commission he would drive Singh to Knox Vault in Kyalami after visits to the Guptas. According to the witness, Singh would take full bags into the safe deposit box facility and come out with the bags empty.

The witness said that in July 2014, Singh had gone to the Three Rivers Lodge in Vereeniging on a Monday and the witness was supposed to pick him up a few days later, on a Friday. When the witness arrived, he saw three men, whom he described as being of “Chinese descent”. He said one had a black bag and another a maroon bag.

At around 3pm, the witness had been called by Singh to come into his room. The three “Chinese” men were in the room, along with Brian Molefe. Singh had asked the witness to put a maroon bag, which the witness described as “very heavy”, into the car.

After Singh’s departure in 2016, Garry Pita had been appointed as CFO. Again, Witness 3 testified, he was to take a CFO to the Gupta family residence.

He said on one occasion, after leaving the Saxonwold residence, Pita was “swearing a lot and was red in the face”. According to Witness 3, Pita had mentioned “R600-million payments” and “timelines” but he did not understand this. The witness said he had to transport Pita to Knox Vault – the same as Singh – on six different occasions. According to the witness, this was done during the week. He would pick Pita up at his home, drive to Knox Vault, where Pita would “go in with a full bag and then come out with an empty bag and then go to the office”.

The witness was asked by Zondo about how he felt about his safety and security.

“I feel scared from here going forward,” he said.

The commission is expected to hear evidence from Seipati Dhlamini, chief financial officer at the Free State Department of Agriculture and Rural Development on Friday. DM