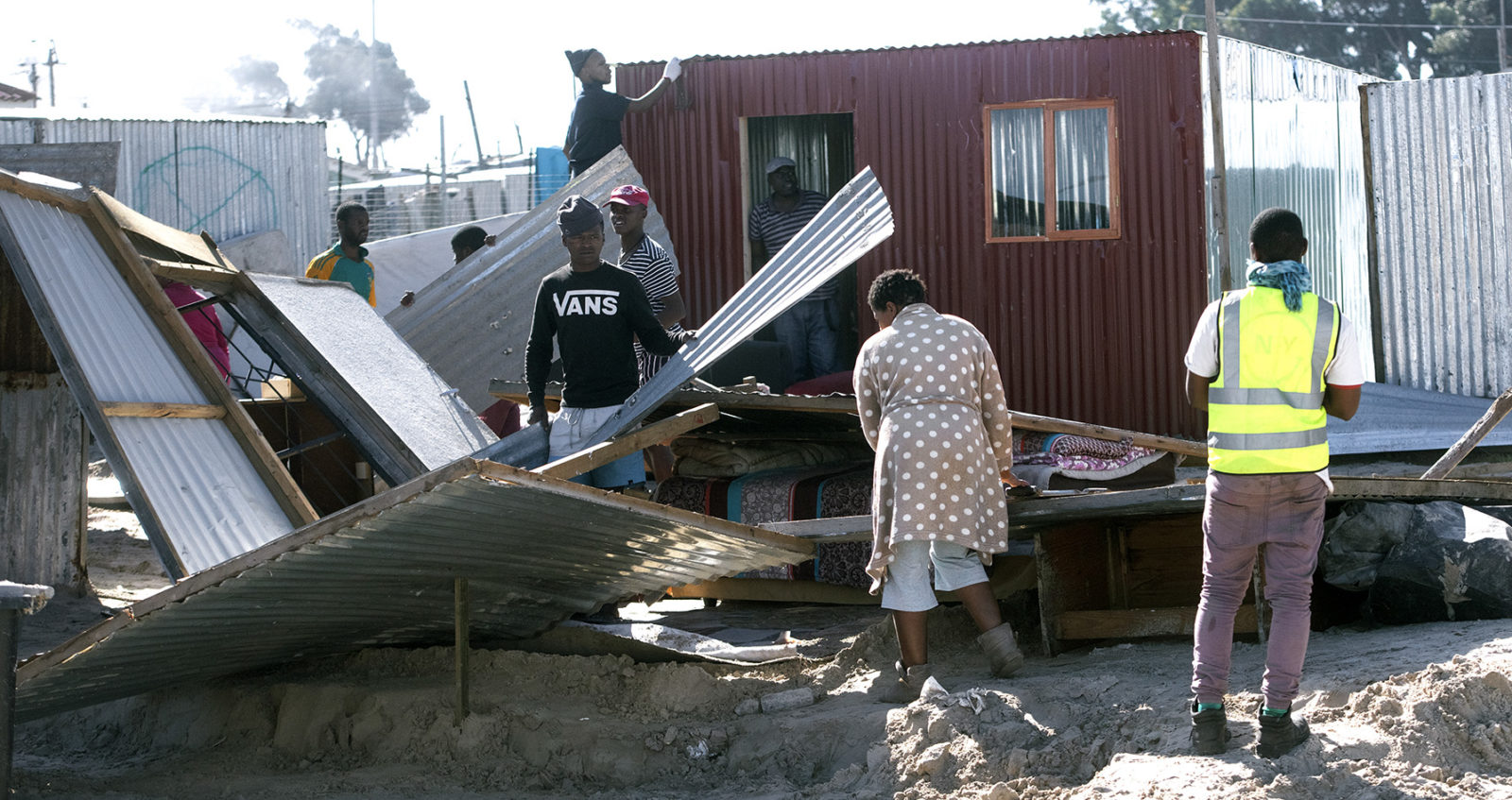 Unlawful occupiers of land have constitutional protection regarding their right to housing – because of, and not in spite of, the unlawfulness of their occupation. Local government municipalities that continue with evictions are in violation of Level 3 lockdown restrictions, as well as their broader legal obligations.

On 21 July 2020, in the midst of the escalating Covid-19 pandemic in South Africa, Minister for Human Settlements, Water and Sanitation Lindiwe Sisulu concluded her budget speech by stating emphatically:

“We will resist the unlawful occupation of land in the same way that we have resisted the eviction of people. The Constitution is very clear on these and the process is to be followed. Lawlessness does not reflect progressive ideals.”

The comment focuses our attention on a tension at the heart of the constitutional protection for the right to housing: In the context of a population which is largely landless and dispossessed, how can “unlawful occupation” be resisted at the same time as “unlawful eviction”? In other words, is the lawfulness of an “occupation” really the key factor in determining which occupiers should enjoy legal protection against evictions?

The South African Constitution, echoing the Freedom Charter, begins by stating that “South Africa belongs to all who live in it”. The Charter itself emphasised a right to be “decently housed” and that “unused housing space shall be made available to the people”. This, like the current “housing backlog” which the minister’s speech estimates to be at 2.6 million, must be understood in the context of the dispossession of black people of land as a result of colonialism and apartheid. This “dispossession of African people of their land by whites”, has been repeatedly acknowledged by the Constitutional Court as one of the evils the South African Constitution seeks to address and transcend.

However, as William Shoki has noted, for many in post-apartheid South Africa, this is a “story that’s remained unchanged in plot, shifting only its storytellers”.

Fortunately, both South African law and international human rights law provide ample guidance on how this tension identified by the minister is to be lawfully addressed.

What exactly does the Constitution protect?

Section 26(2) of the Constitution therefore requires the state to ensure the provision of more than simply “bricks and mortar”. The court also explained that the government is duty bound to provide housing to a “larger number of people, but to a wider range of people as time progresses”.

The government is therefore constitutionally obliged to ensure that everyone has access to housing which is adequate and dignified. But this is not where the legal protection provided by the right to adequate housing ends. Recognising that many of South Africa’s dispossessed and landless population would require protection of their current homes while waiting for the government to provide housing, section 26(3) of the Constitution is clear that “no one may be evicted from their home, or have their home demolished, without an order of court made after considering all the relevant circumstances”.

The protection afforded by the Constitution against evictions is notably strong with courts having a central role to play in prohibited unlawful evictions which are described as “forced evictions” in terms of international human rights law. The definition of forced evictions provided by the United Nations Committee on Economic, Social and Cultural Rights is the “removal against their will of individuals, families and/or communities from the homes and/or land which they occupy, without the provision of, and access to, appropriate forms of legal or other protection”.

What about “unlawful occupiers” and “land invaders”?

Rightly recognising that the Constitution and international human rights law provide extensive legal protection to all people’s homes, as early as 1998 Parliament enacted the Prevention of Illegal Eviction from and Unlawful Occupation of Land Act. Commonly known as the PIE Act, the title of the act reveals that it is explicitly intended to provide protection against “illegal evictions” from “unlawful occupation” of land.

The PIE Act details the procedural and other requirements which must be complied with before a court is empowered to decide that an eviction of unlawful occupiers is just and equitable in all relevant circumstances.

When a court is called upon to consider whether an eviction is “just and equitable” in all “relevant circumstances”, the Constitutional Court has clarified that the enquiry has “nothing to do with the unlawfulness of occupation” because legal protection in terms of PIE “assumes and is only due when the occupation is unlawful”.

Contrary to this, the minister’s comments feed into a public discourse which assumes and asserts that “land invaders” who are in “unlawful occupation” of land, are not deserving of constitutional protection against eviction. But it is precisely those in unlawful occupation that are quite correctly beneficiaries of protection afforded in terms of international and South African law.

As a result of this, the Constitutional Court has emphatically rejected even the mere description of unlawful occupiers as “land invaders” in the following extremely strong terms:

“This description of human beings is less than satisfactory and cannot pass without comment. It detracts from the humanity of the occupiers, is emotive and judgmental and comes close to criminalising the occupiers.”

It is in this context that the function of describing “unlawful occupiers” as “land invaders”, as well as the minister’s categorical warning of the need to “resist unlawful occupation” must be understood.

The description of them as “land invaders” is not only constitutionally irrelevant but also, according to the Constitutional Court, constitutionally impermissible and tantamount to the “criminalisation” of occupiers. All this makes sense in the context of the continued landlessness of the majority of black South Africans, in particular as a consequence of colonialism and apartheid.

At the best of times, even when conducted in the most sensitive possible way, evictions have devastating effects on the lives of those who are evicted. The reasons for this are obvious. The Constitutional Court has therefore recognised that because people’s homes, however rudimentary, are the “only relatively secure space of privacy and tranquillity in what (for poor people in particular) is a turbulent and hostile world”, evictions constitute a “shock for any family, the more so for one that has established itself on a site that has become its familiar habitat”.

In the context of Covid-19, evictions are even more disastrous, presenting an additional public health risk to both those evicted and society as a whole. Consistent with recommendations by the UN Committee on Economic, Social and Cultural Rights and the UN Special Rapporteur on the Right to Adequate Housing, the South African government has banned the execution of eviction orders in all but the most exceptional circumstances at least until the end of Level 3 lockdown restrictions.

Unfortunately, however, local government municipalities, in clear violation of these regulations and their broader legal obligations have continued to evict people from their homes unlawfully, without court orders, sometimes violently.

This has been the case in the Western Cape in the context of the City of Cape Town’s demolition of Bulelani Qolani’s home while he was naked and taking a bath as well as the repeated demolition of Ginola Phillip’s Hangberg home in what the High Court has condemned as “inhumane, heartless” and done with “scant regard to his safety, security and health particularly in light of the Covid-19 health pandemic”.

It is also an all too familiar story for members of Abahlali Basemjondolo for whom violent evictions at the hands of the Ethekwini Municipality continue unabated during the Covid-19 pandemic, as has been documented in a recent report of the Church Land Programme.

It remains the horrific experience of residents of Johannesburg South who continue to be evicted and ask the following pertinent question: “The president said wear a mask and stay at home. What do you do when they take your home away?”

Lawlessness does not reflect progressive ideals

The minister is correct that “lawlessness does not reflect progressive ideals”. The true lawlessness currently under way, however, is not the struggle of historically dispossessed black people to keep their modest homes intact, wherever these might be and however rudimentary they appear. It is the refusal of government, particularly at a local level, to adhere to its legal obligations to prevent unlawful evictions of unlawful occupiers. It is evidenced in their insistence on proceeding with evictions in an unlawful, sometimes violent manner, and in their refusal to go to court to seek evictions.

This behaviour of certain state authorities has the effect of criminalising poverty and creates an additional public health risk at a time when any further strain on the lives of South Africa’s poor can be ill afforded. Neither the landlessness of such a substantial portion of the country nor the lawlessness of the state in further punishing the landless reflect the progressive ideals of the South African Constitution. DM/MC

Tim Fish Hodgson (@TimFish42) is a legal adviser at the International Commission of Jurists (@icjarp) based in Johannesburg.

The relevant legal principles discussed in this op-ed are spelled out in some more detail in a short information sheet (available here) just published by the Socio-Economic Rights Institute in partnership with the International Commission of Jurists.