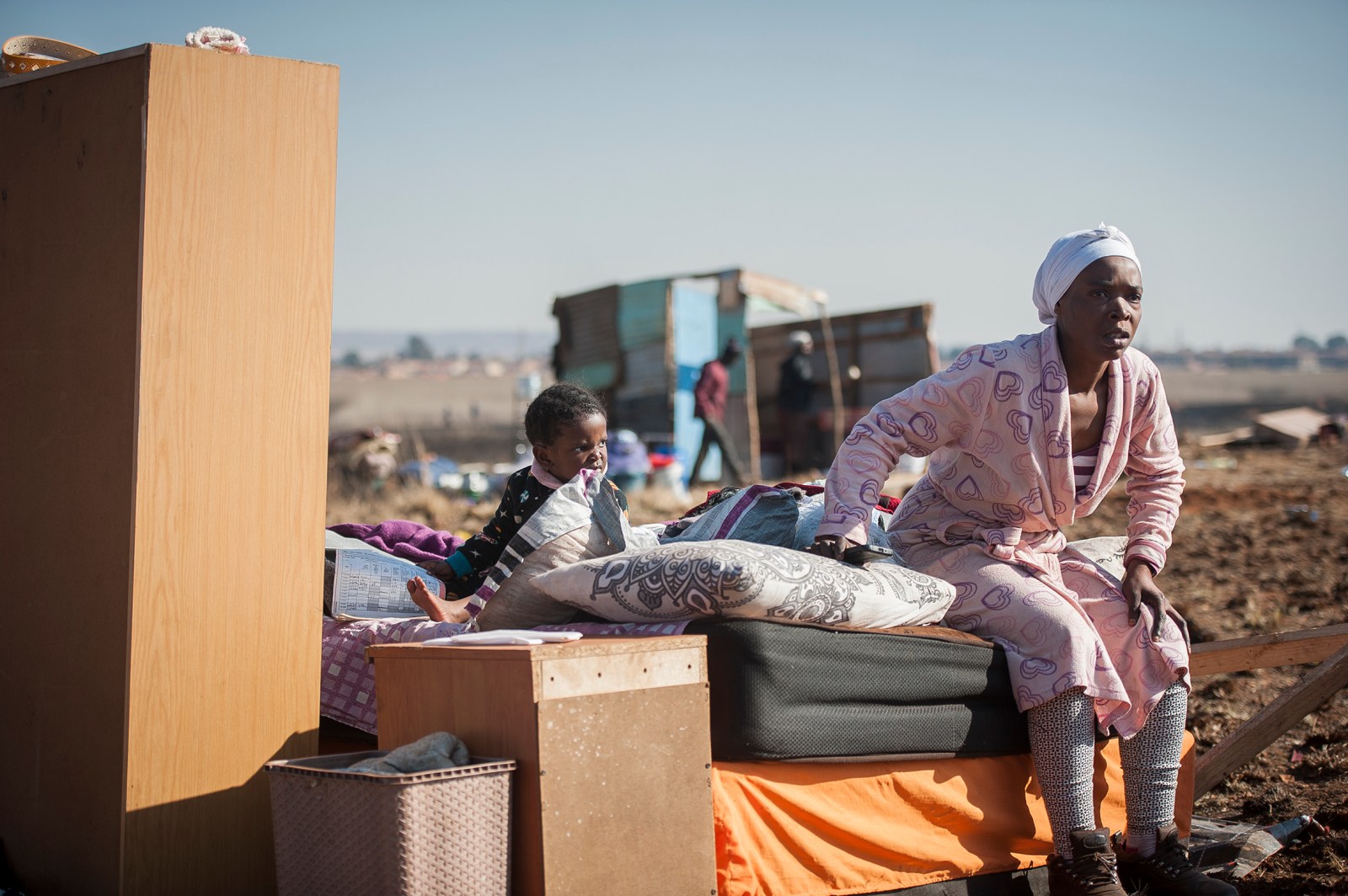 Ndebe Mathebula and her two-year-old daughter Siphihel Mathebula sit on a mattress alongside their belongings after their shack was torn down. (Photo: Shiraaz Mohamed)

‘We are human beings. The president said, wear a mask and stay at home. What do you do when they take your home away?’

Residents of the Nana’s Farm informal settlement, bordering Eldorado Park and Lenasia, south of Johannesburg were woken up on the morning of Saturday 18 July when metro police officials began tearing down shacks.

While the regulations state that newly erected shacks can be removed, residents of the informal settlement are crying foul, saying they had occupied the land for some time now.

Francina (only name given) sobbed while officials removed the remains of her shack, “I am a security guard, and I do not earn much money. It cost me R2,800 to put up this shack. It took me a year to save that money. All that money is now wasted.

“I have nowhere to go. I don’t know where me and my two kids will sleep tonight. This is not a new shack. I did not move in here yesterday, but they took it down.”

Another resident, Ringo Mathebula, protested. “We have asked there by the office, is this legal? They said this is legal. Even the police officers that came here said that if we are living on the inside, we have no problem.

“Now the story has changed. They entered all the shacks and said if you are a resident here we will leave you because of the Covid-19 law. Now the Covid-19 law is vandalised. They want us to go and close the street, which is not right. We cannot fight like that.

“We are human beings. The president said, wear a mask and stay at home. What do you do when they take your home away?”

More than 130 shacks were demolished. Afterwards, residents protested on the nearby N12 highway and clashed with officials.

The clashes sparked a visit by Johannesburg Executive Mayor Geoff Makhubo who addressed residents from Nana’s Farm and Eldorado Park who were protesting against the growing informal settlement.

Makhubo said, “We don’t want anarchy and communities fighting one another. This community [Eldorado Park] has been living here since I was born, and allowing anarchy in the city is as good as giving away the city.

“Whoever has been here [Nana’s Farm] for the longest of time is allowed to stay here. We need to do an impromptu inspection. We can tell if a shack was built yesterday. We were not born yesterday. We can tell these things. We are not going to allow any more growth. Any new shacks will be dealt with.”

“Those shacks that came up yesterday and the day before must be taken down. The first thing that is going to suffer is the communities of Eldorado Park and Lenasia. It will take a strain on the electrical infrastructure, as it will not be able to handle the strain from all the illegal connections. It is going to affect the infrastructure of the City of Joburg.

“Illegality cannot be allowed. If you want to put pressure then put pressure on the province and the City of Joburg to start developing houses. That is the solution, otherwise there will be chaos throughout South Africa if we allow this.”

Community leader Maseko expressed his views: “This is not land invasion. This is assistance to the poor families. Why don’t they provide these families with proper housing, water and electricity?”

JMPD spokesperson Wayne Minnaar responded, “The structures that were demolished were unoccupied or were newly built.”

The director of research at the Socio-Economic Rights Institute of South Africa, Alana Potter, commented, “Municipalities are continuing to evict people and demolish their homes despite the moratorium. Semantic gymnastics about land invasion versus legally occupied aside, it is unlawful to evict people from their homes at Level 3.

“It is also a profound violation of humanity to evict individuals and communities in the midst of a pandemic in which having a home is a first line of defence against Covid infection and a base for proximity to social and economic networks at the time that they are most desperately needed.” DM