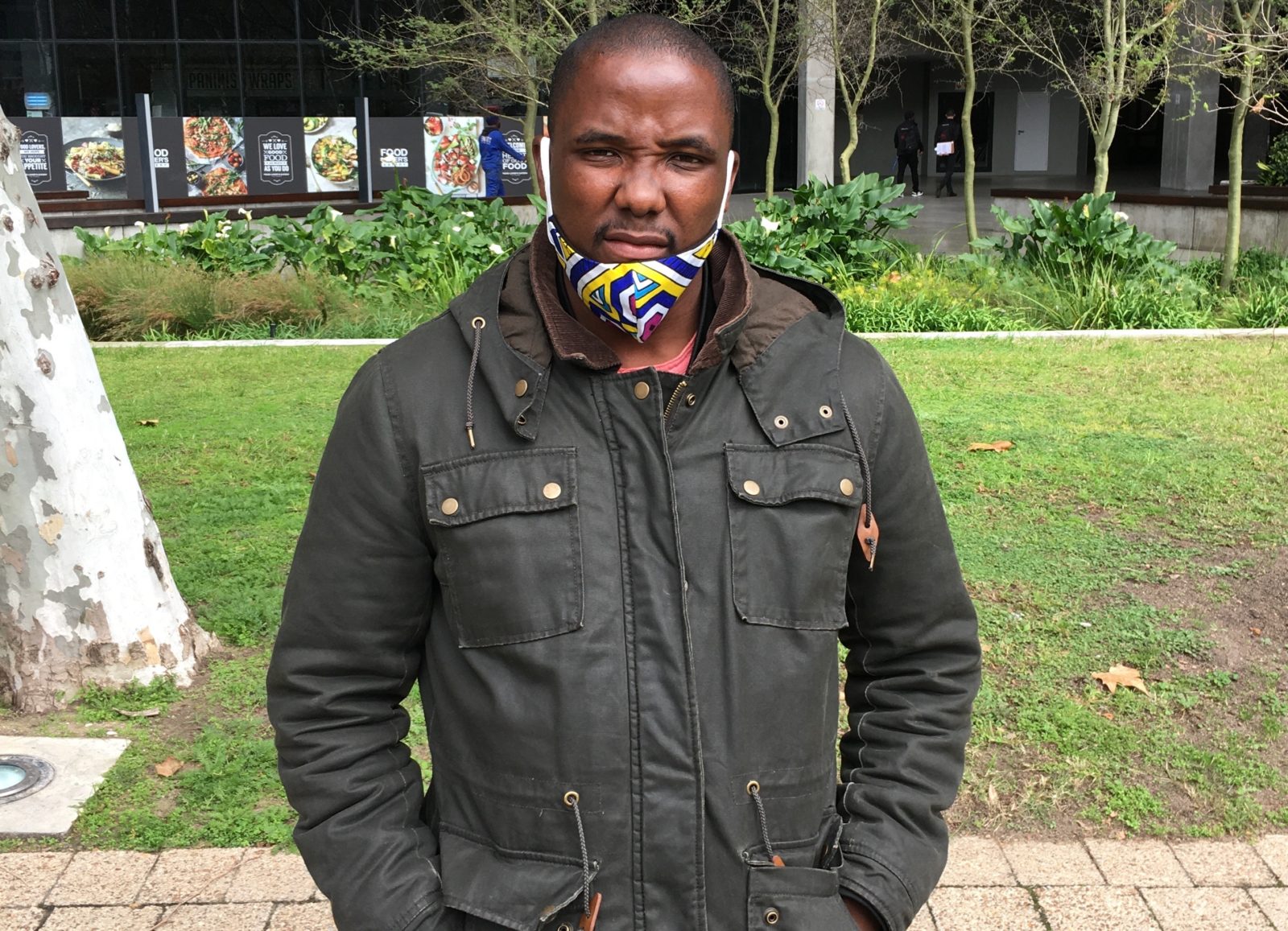 Bulelani Qolani was dragged from his shack on Wednesday, naked, by City of Cape Town law enforcement officers. The officers have been suspended. (Photo: James Stent)

GroundUp has reviewed videos and interviewed witnesses. By Vincent Lali and James Stent

Last week GroundUp ran the story of a video showing Bulelani Qolani being dragged naked from his shack by City of Cape Town law enforcement officers in Empolweni. The following day, we interviewed Qolani, who told us that he had been inside his house and bathing before being thrown out by City Law Enforcement. He also told GroundUp that he had been living in that shack since 16 March.

Following the incident, the City of Cape Town suspended four of its law enforcement officers involved in pulling Qolani from his shack, pending an investigation into their conduct.

The occupation of Empolweni was the subject of a court case during the stage 5 lockdown. A Cape High Court order from 17 April currently prevents the City from demolishing 49 structures belonging to 130 people, at least during lockdown.

GroundUp reported on the day of the court order that activist groups Social Justice Coalition (SJC) and Ndifuna Ukwazi (NU) had agreed to assist the residents in carrying out this obligation.

Mayco Member for Human Settlements Malusi Booi has disputed Qolani’s claim that he had been living on the site since 16 March, saying: “No eviction has been conducted on this site, only anti-land invasion operations. Mr Qolani could not possibly have been living there as he claims, given that Law Enforcement has been conducting near daily anti-land invasion operations at the site.”

What happened on 1 July?

In a series of statements released over the past week, the City has claimed that Qolani was not bathing before being thrown out of his shack by Law Enforcement, but rather that he had undressed aftertalking with Law Enforcement officers in an attempt to prevent his eviction.

The City also said it had videos that cast doubt on Qolani’s account. It claimed that footage showed, “Mr Qolani clothed and standing outside during the operation to remove five illegal structures…[and] Mr Qolani walking out of a structure unclothed. He does this without prompting, and without any Law Enforcement officer near him.”

Nevertheless Mayor Dan Plato issued a statement condemning the conduct of the officers seen in the video. And in a 6 July statement Mayco Member for Safety and Security JP Smith said: “The City really does not tolerate the loss of dignity that occurred.”

We have been sent a new video. It shows a clearly upset Qolani standing completely naked in front of his shack with his ID in his hand shouting at law enforcement. Witnesses told GroundUp that he was doing this to show law enforcement officers who he is or that he is a South African citizen.

At the end of the six-second video, a man, presumably a fellow resident, attempts to calm Qolani or usher him into his shack. At this point Law Enforcement officers are at least a couple of metres from Qolani.

As far as we can tell, the video was filmed before the one showing Qolani being dragged out of his home by law enforcement officers, because his shack was being destroyed in the second video.

Community leader Nothemba Konokono says she was present. She says the officers wanted to know who was staying in Qolani’s shack and ordered him to come out. “He told them he could not come out as he was busy washing,” she told GroundUp.

“Afterwards he stood naked in his doorway and told the officers that he was a South African citizen but homeless. He held up his ID for officers to see and asked them to scan it,” she said.

This appears to be what’s happening in the new video we have received.

Konokono said that law enforcement officers stood next to Qolani’s shack as he spoke to other officers from his doorway.“The officer who stood next to the shack pepper-sprayed one resident who was [ushering] Bulelani back into his shack,” she said. (The new video we have seems to have been taken before this.)

Konokono said that other shack dwellers stood far from the Law Enforcement officers because they feared that they might be pepper-sprayed too. It was after Qolani went back into his shack and closed the door that officers opened the door and pulled him out, said Konokono.

Community leader Nomazotsho Nobebe also said that Qolani was still busy washing when he addressed the officers from his doorstep.

Axolile Notywala, leader of Khayelitsha CAN and Social Justice Coalition, said he had arrived at the scene just before the officers pulled Qolani out of his shack.

Missing from our information is what law enforcement officers saw.

The City has appointed Law firm Fairbridges Wertheim Becker Attorneys to independently investigate the incident and the conduct of the officers.

But the Legal Resources Centre has said that this appointment undermines the independence of the investigation, as Fairbridges is frequently used by the City. The company was the attorney of record for the City in the Empolweni court matter.

The City has defended its decision, saying that the firm “is well known for professionalism, objectivity and the integrity they display in carrying out their duties”.

Nakedness as a tactic in evictions?

We asked the SJC’s Notywala if shack dwellers use nakedness to avoid eviction. He replied: “Homeless people will do anything to find access to land and homes.”

“In the case of Bulelani Qolani, all we know is that he was bathing . If he then decided to use that as a tactic, it shows the level of desperation from poor people without homes in the city.” DM