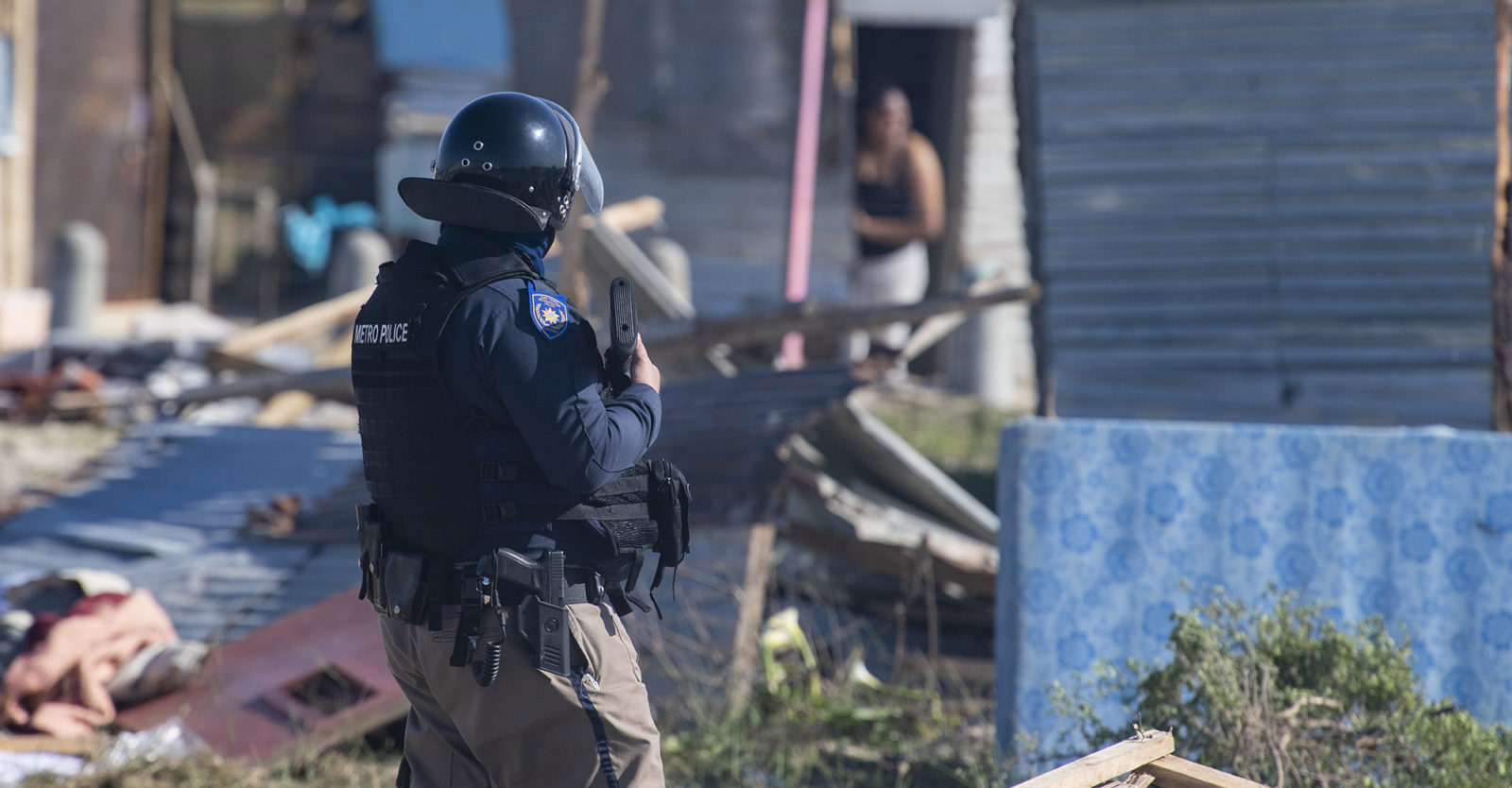 As tensions run high between land protesters and the City of Cape Town law enforcement units, health centres in Khayelitsha have been caught in the crossfire, with yet another Covid-19 health facility damaged. An ambulance paramedic was injured.

A group of people in the Western Cape allegedly stoned Khayelitsha Thusong Centre, a temporary “field hospital” for Covid-19 patients, during a protest on Saturday.

Health workers and patients were left in a “panic” when stones were thrown at windows, according to the Khayelitsha Health Forum.

The day before, also during a demonstration, phones were stolen from a Khayelitsha ambulance and a paramedic was reported to have minor injuries, according to Mzanywe Ndibongo, chairperson of the Khayelitsha Health Forum.

“We condemn what is happening because this is our community,” Ndibongo told Daily Maverick. “And health comes first. Once these hooligans start destroying health facilities people can’t get any place to be helped.”

The City of Cape Town told Daily Maverick that after rocks were thrown at the facility, security personnel managed to bring the situation under control.

“Some windows were damaged… The facility was not necessarily the target for the protesters. But a few individuals started throwing rocks at it,” Western Cape health spokesperson Mark van der Heever said.

However, Ndibongo pointed out that the two weekend incidents involving health facilities were among a number that had occurred in less than a week.

Police arrested four suspects for arson on 18 July after the Desmond Tutu Community Hall in Khayelitsha was partially burnt during a protest.

The hall, which is generally used for indoor recreational events, was in the process of being retrofitted as an overflow facility so that “residents could access healthcare services in a safe manner with a reduced risk of Covid-19 exposure”, the City of Cape Town said in a statement.

On 21 July, the City released a statement condemning an attack on a Dial-A-Ride vehicle — part of a City initiative to assist people with disabilities — in Khayelitsha. Two passengers and a driver were injured when the vehicle was stoned.

The Citizen also reported that four Emergency Medical Services (EMS) teams were attacked on 20 July. One of the teams had a patient in their ambulance at the time of the attack in Khayelitsha.

In another incident on the same day, funeral parlour owner Nelly Tom was caught in the crossfire of the protest when her vehicle was stoned on her way home from a car wash in Khayelitsha Site-C.

“I was just driving and they threw stones… I think they thought it was a government or official car, that is why they targeted me, because my bakkie has my company name on it,” Tom told Daily Maverick.

Tom said stones hit the windshield which led to glass shattering in her face. She managed to drive away from the scene without injury.

“The only thing I could think to myself is that I must just escape. I almost died. If the stone hit me on my face I could have gotten dizzy and caused an accident,” Tom said.

“I don’t know what the government can do, but they must do something. We are not safe in Khayelitsha with all these protests and land issues.”

In the same week, the City learnt that firefighters on their way to tackle a fire in Khayelitsha were surrounded and their vehicle stoned. Although the vehicle was damaged and will be out of commission until it can be repaired, the firefighters were not seriously injured.

Protests have flared up over land disputes after law enforcement tore down structures in a newly formed settlement in Mfuleni on Sunday 12 July.

Most of the people occupying land in Mfuleni were from Khayelitsha, Nyanga and nearby informal settlements and who were in search of vacant, dry land after their shacks were flooded after storms in the second week of July.

The City argues that some of the occupied land is City-owned while other parts belong to Cape Nature.

The City says many people are illegally occupying land because of loss of income due to businesses closing down during lockdown. This has resulted in many backyard dwellers being evicted.

A meeting was due to take place on Monday 27 July between Khayelitsha non-profit organisations, including the Khayelitsha Health Forum, and ward councillors to determine how to protect health services and facilities during the protests. However, according to Ndibongo, the meeting was postponed due to a “shutdown” of the Cape Town Metro organised by the Gatvol Captonian movement.

The City suspended services such as refuse collection and also closed all refuse drop-offs.

“We want to appeal to the leaders of these protests… to understand that if there is a violent incident that happens to you during these protests they would want to come to these facilities that they are destroying,” Ndibongo said.

In the past week, law enforcement services have responded to 48 protests, from Khayelitsha to Delft, Mfuleni and over the past few days in Kraaifontein. This has resulted in 12 arrests, injuries to 18 staff members and damage to seven vehicles.

“The City respects the right of individuals to protest, but there is no justification for the violence we have experienced in recent weeks,” said the City’s mayoral committee member for safety and security JP Smith on Monday.

“Also, based on some incidents recorded during these protest actions, it is clear that criminal elements pose a clear and present danger to public safety and are using the protests as cover for their own gain.” DM