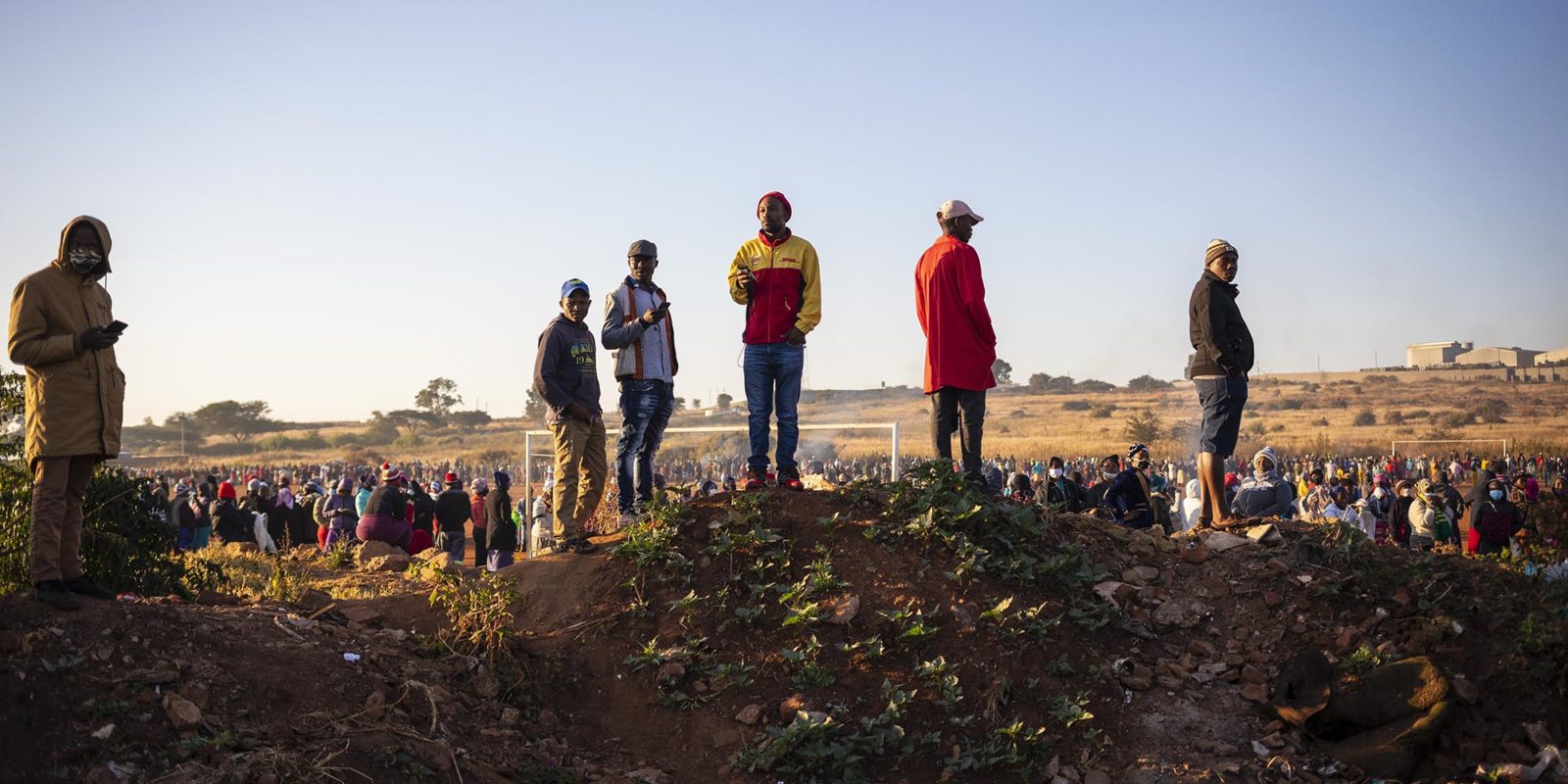 People queue at sunrise to wait for food during a handout during the national coronavirus lockdown. (Photo: EPA-EFE / Kim Ludbrook)

As South Africa weathers the storm of increased hunger, poverty and unemployment during the pandemic, the government has announced its intention to introduce a Basic Income Grant for unemployed non-grant recipients between the ages of 18 and 59.

The government may be introducing a Basic Income Grant (BIG), according to Social Development Minister Lindiwe Zulu.

Speaking during a government social cluster briefing on Monday 13 July, Zulu said historic and emergent factors, in particular the Covid-19 pandemic, had spurred discussions on how the poor will continue accessing support once the R350 Social Relief of Distress (SRD) grant is discontinued.

“Since we already have categorical grants for children, older persons and persons with disabilities, the BIG will be an income support grant for the population aged 18 to 59,” said Zulu.

The SRD grant is being paid out until the end of October, after which the government is considering implementing the Basic Income Grant.

But the BIG discussion is nothing new.

On Wednesday, 6 July, the matter was discussed before the Social Development parliamentary committee. According to Zulu, researchers from the committee of inquiry responsible for the 2002 “Taylor Report” were present.

Back then, the committee found that providing a R100 universal grant per person per month, could reduce South Africa’s poverty rate by 76%.

According to an ANC discussion paper seen by Bloomberg, the party had proposed a “R500 monthly grant” and the aid would “cost the state R197.8 billion a year”.

“Between 50% and 60% of the money could be recouped by levying extra taxes on those with jobs,” Bloomberg reported.

Regarding who would be prioritised when distributing the grant, Zulu said:

“Currently, the most vulnerable groups of our population are the youth between 18 and 24 and the elderly between 50 and 59. Targeting these groups first and then progressively expanding to other age groups may be warranted.”

Sassa’s infrastructure reaches 31.2% of the population and the grant would be “unconditional” and “individually targeted”, said the minister.

By 12 July, more than R1.2-billion of SRD grants had been paid out to close to 3.5 million applicants who submitted in May.

“To date, we have received over 7.5-million applications,” said Zulu.

Over two million applications were rejected as those persons were already receiving some form of income support such UIF, other social grants or NSFAS stipends.

The minister apologised for a number of issues in disbursing the grant, including the slow payment process caused by the need for multiple data verification sources, and slow response to requests to provide banking details by successful applicants and the SRD grant using a custom-built system, she explained.

The department has introduced a Recourse Mechanism for persons who were declined and want to review the decision.

Appeals can be emailed to [email protected]

Additionally, all Sassa approved applicants will be reassessed monthly to check if their employment or income status has changed. If this is the case the grant will be terminated.

“The reassessment of all applications has already commenced and the applicants are being reassessed against SOCPEN, UIF, NSFAS, Persal and Persol in preparation for batch release of June payments from this week.”

Following a judgment in June from the North Gauteng High Court, the R350 grant is also now available to asylum seekers and special permit holders.

The amended directions were gazetted on 2 July.

“It will cost approximately R689-million to implement this judgment. We are currently in engagements with the Department of Home Affairs to verify the authenticity of all permits to limit fraudulent applications,” said Zulu.

To assist with disability and care dependency grants, 465 doctors have been contracted across the provinces to conduct assessments. This will be gradually implemented. Those who had already begun the application process during the early stages of the lockdown will be prioritised.

Close to 900,000 food parcels have been distributed by the department to more than 44-million people.

More than 1.2-million parcels were distributed by partner organisations to over six million people.

“The advent of Covid-19 compels the sector to reconsider our food security response mechanisms to meet the demand on the ground. We are looking at various ways to strengthen the current food networks and distribution to meet the basic needs of vulnerable households.” DM/MC