BIG: There’s an urgent need for a basic income grant for the unemployed 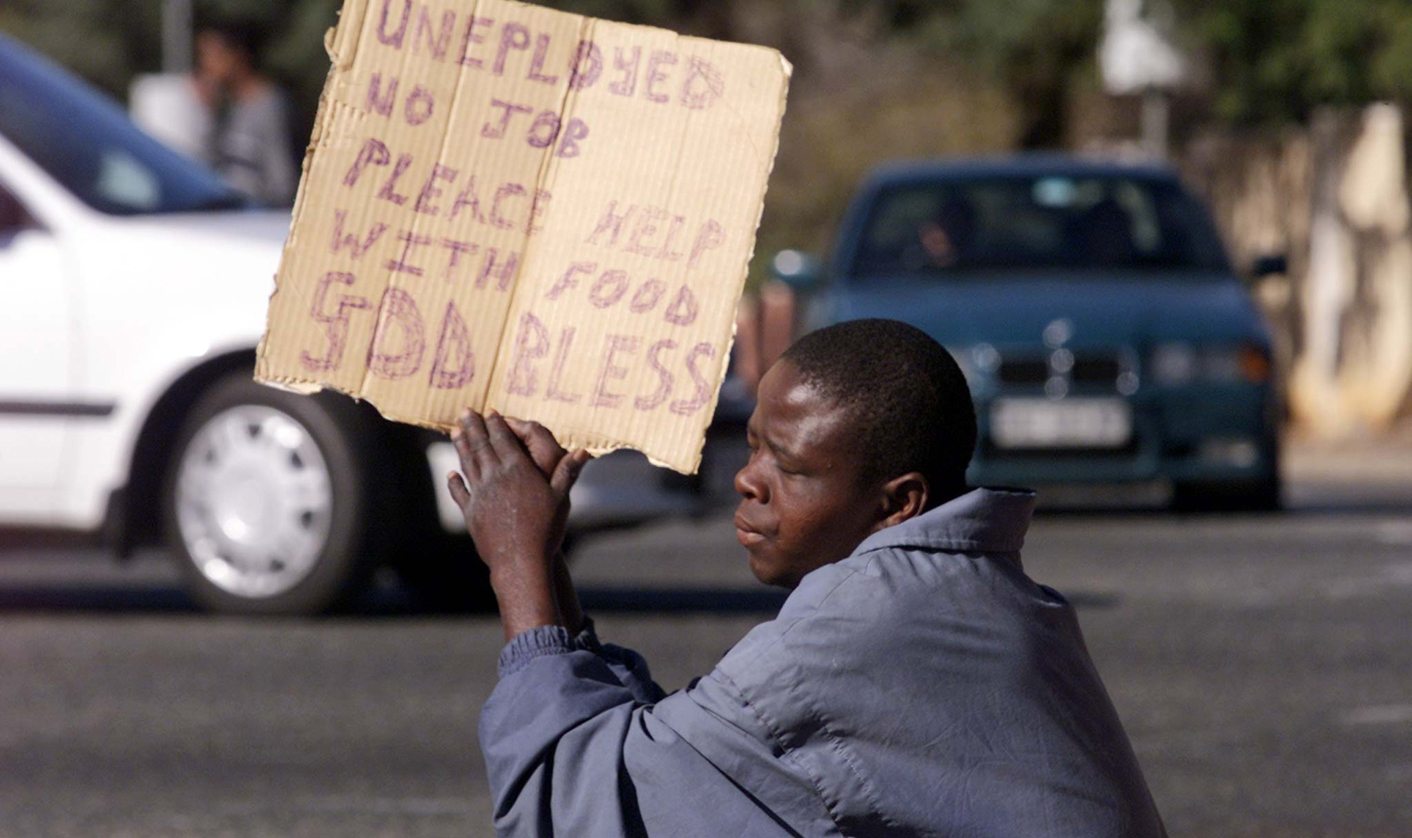 An unemployed black South African pleads for money or food at a Johannesburg street corner July 21. Leaders at the Group of Eight industrialised nations meeting in Okinawa admitted on Friday they must breathe life into a stalled initiative to reduce the debts of the world's poorest countries. But they refused to ease the strict conditions linked to debt relief. JN/WS - RTR6J8O

As the Covid-19 crisis bites deeper, the time has come to give serious consideration to policy proposals made since 2000: for a targeted or universal basic income grant for unemployed individuals between the ages of 18 and 59 years. This would include informal traders and daytime piecemeal job-seekers.

South Africa, like the rest of the world, is facing both a health and economic pandemic as the cataclysmic event of Covid-19 sows havoc. As we all seek to contain the devastation, the poor and most vulnerable are feeling the impact far worse than we can imagine.

At this defining moment for our collective consciousness, urgent intervention is needed. Countries around the world are putting in place extensive measures to address the socio-economic impact of Covid-19. A report by the World Bank and International Labour Organisation found that by early April, 106 countries had introduced social policy measures, regrettably many with a bias towards businesses. Some countries, Namibia, Mexico, India, Chile, Colombia, Indonesia and Mongolia, for example, have gone beyond a limited set of interventions, confronting the devastation of Covid-19 from a position that is pro-poor.

South Africa has most admirably moved with impressive rapidity to contain the spread of the virus but needs to be more responsive to the plight of the poor. Some academics, researchers and opinion-makers are proposing that government increase the value of child grants, or respond to the plight of the informal sector through the child support grant.

Would such an intervention suffice to support all those facing destitution? Does such a proposal sufficiently consider those who have been unemployed for many years? Others have called for a broader set of interventions. There is a need for a reflection on what it is the country should seek to achieve in ameliorating the plight of those we have and continue to leave behind.

South Africa’s unemployment rate exceeds 27%. Most of the unemployed depend on other low-income earners, including recipients of social grants. There are an estimated 1.26 million poor households whose average income per household member is below the food poverty line and none of the members in the household receive any social grant.

The Child Support Grant (CSG) reaches about 35% of households. The efficacy of only using the CSG in reaching all those who are even more destitute in this period is questionable. That is without indicating that at the last assessment of the number of children eligible for, but not in receipt of the CSG, about three million children were excluded. 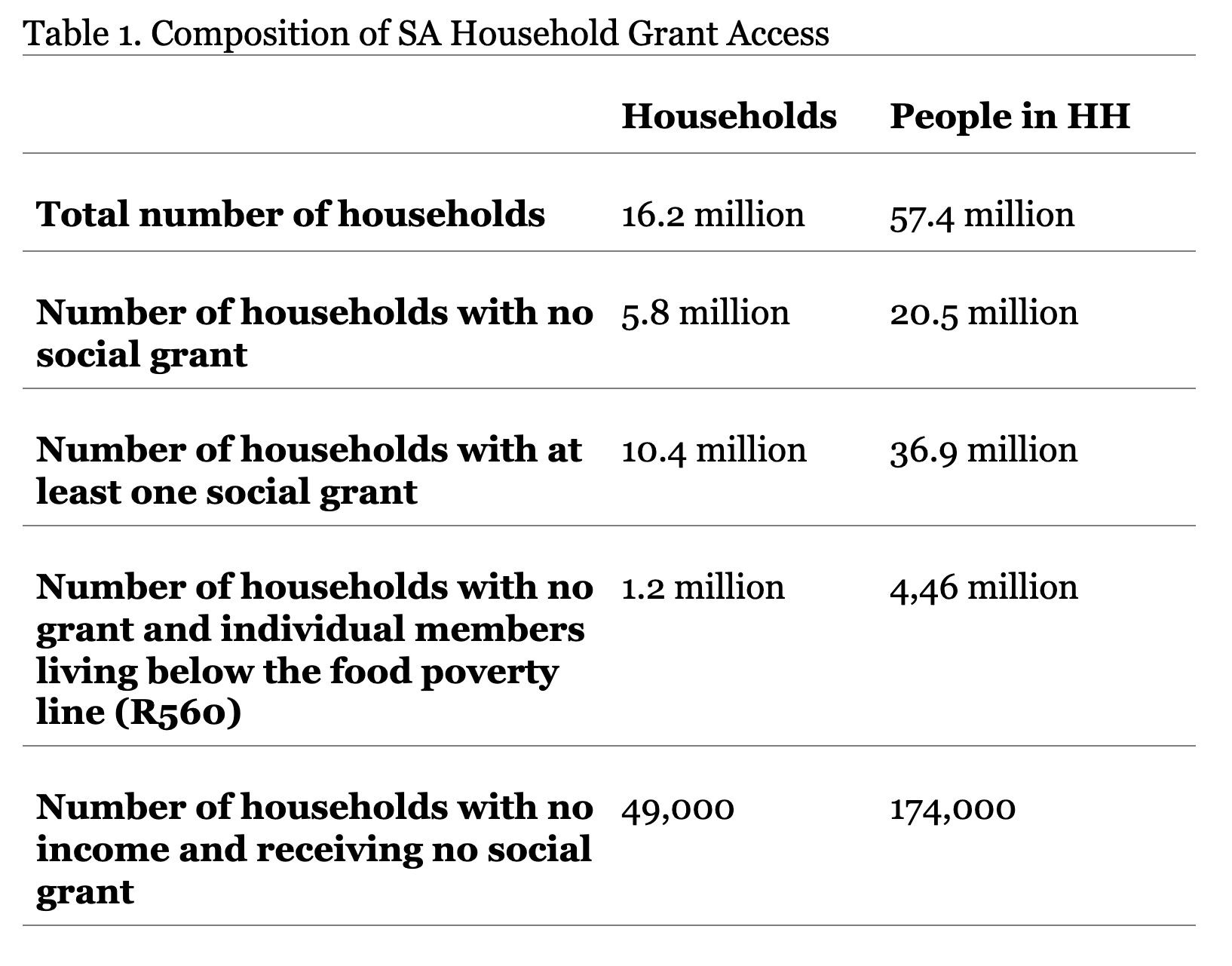 Increasing the value of the child support grants and supporting the informal sector will not spread the net sufficiently wide. A limited response leaves out a significant percentage of the population, particularly, those in the 18 to 59-year-old age cohort. The unemployed – of whom millions have given up, and some of whom frequent street corners looking for day jobs – whose means of survival has been taken away by the lockdown seem to have been forgotten by society.

The time has come to give serious consideration to policy proposals made since 2000; for a targeted or universal basic income for unemployed individuals between the ages of 18 and 59 years. This would include those informal traders who would have lost their only source of income as a result of the government lockdown, and daytime piecemeal job seekers. A short-term income support for all would be the easiest to implement (administratively). This can be done while simultaneously increasing the value of all the grants.

Would such an intervention be affordable and at what level? Should it only be the preserve of developed or richer countries? The time has come to show compassion. Affordability is a function of political will.

Can a broad-based income support regime be implemented expeditiously? Yes, we have the capacity. Adults in households receiving grants can be enrolled with ease, electronically, on the basis of existing biographical information. South Africa has at its disposal a range of institutions: Sassa, UIF, Compensation Fund, banks, provincial and local governments.

The argument may still surface that a basic income grant (BIG) is beyond our emergency financial response – thus, we pose a second argument: had this crisis come through at a time with something such as a BIG in place, people living at the margins of poverty (and worse), as well as SA as a whole, would have been in a much better position to handle the crisis than is the case now. Do we wait until the next crisis before the glaring levels of poverty in our economy are taken seriously?

South Africa should consider the systematic introduction of income support to all and give effect to the constitutional provision that “everyone has the right of access to social security …”, a right government may be obliged to implement, even if it increases the amounts of all other grants. This would alleviate poverty and destitution now, as well as prepare us better for a next potential pandemic or crisis. Consider the reality: for millions this crisis has no end but is an ongoing wretched battle of endurance. After lockdown, they will go back to their daily struggle for survival.

Thus, as a priority, the government must introduce income support for adults between the ages of 18 and 59 years. Many do not live in households with children, and if they do, there is no guarantee that increasing the CSG will make the children much better off or effectively mitigate the financial impact that is looming. DM

Selwyn Jehoma is the former deputy director-general: comprehensive social protection insurance in the Social Development Department. He left DSD in 2012 and joined the Economic Policy Research Institute. He has undertaken assignments in 15 countries in Africa and Asia, advising governments and international donors on social protection reforms.

Engenas Senona is an independent research consultant and has worked for the South African government as well as international NGOs focusing on the design and implementation of social security systems.