Eastern Cape admits patients to a field hospital while a second is inspected for safety; Ramaphosa deploys soldiers until September 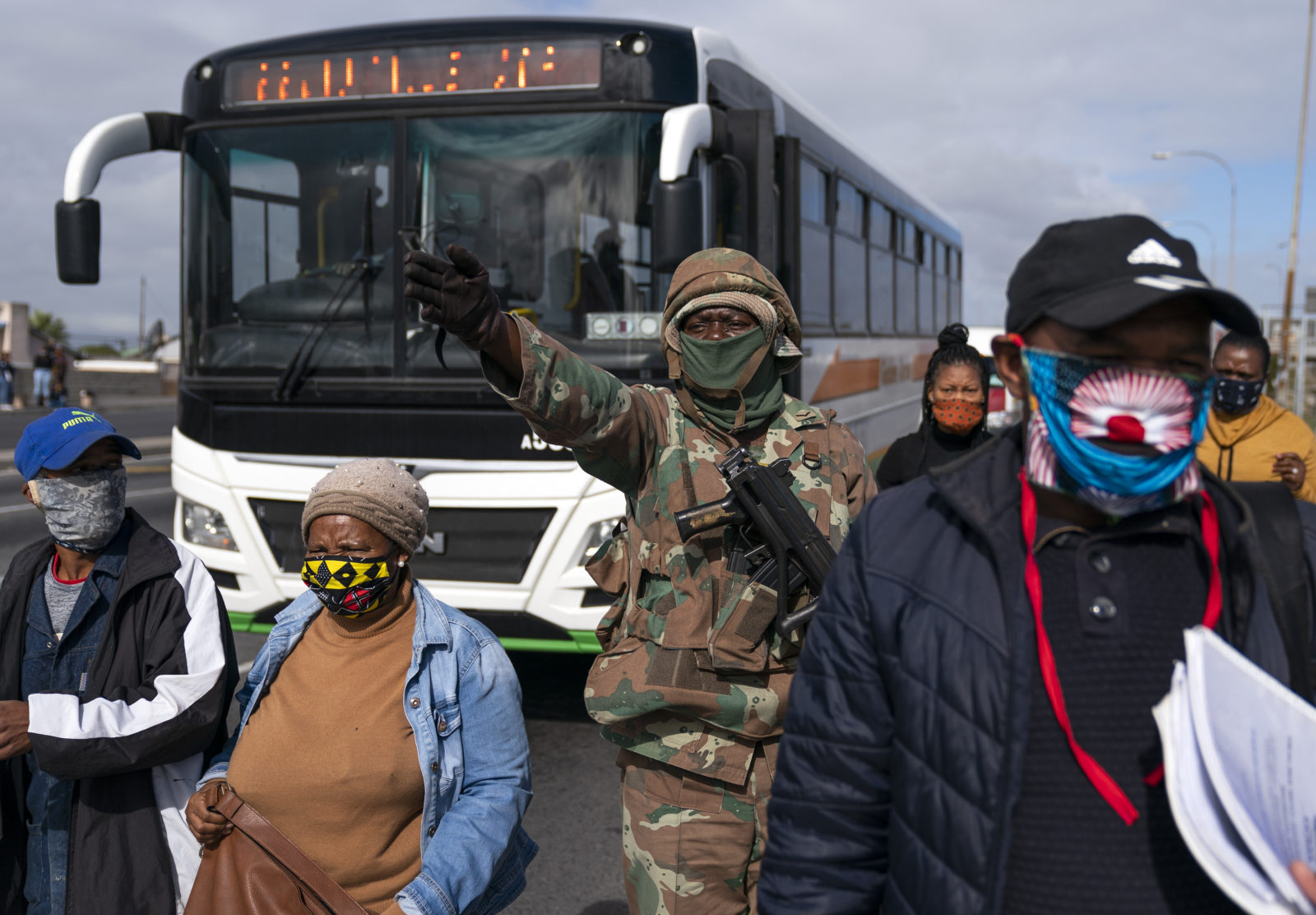 epa08419717 A South African National Defense Force (SANDF) soldier directs and checks the movement of South Africans at a checkpoint in Cape Town, South Africa, 13 May 2020. The Western Cape of South Africa is the worst hit province with the city of Cape Town the epicentre of the virus. South African is on a risk adjusted phased lockdown of the country to try stem the spread of the coronavirus SARS-CoV-2 which causes the Covid-19 disease. South Africa has some of the most severe lockdown rules in the world including no jogging or walking outside of homes except between 6-9am, no sales of alcohol or cigarettes, no walking of dogs, no leaving home except for essential journeys with heavy penalties for transgressors. EPA-EFE/NIC BOTHMA

On Friday, the Eastern Cape’s first field hospital admitted eight patients transferred from overwhelmed hospitals in the Nelson Mandela Bay metro. This comes as the Livingstone Hospital is inspected after reports of failing health and safety standards. The National Health Laboratory Service has suspended the services of a courier company after it endangered lives by losing Covid-19 test samples. South African National Defence Force members will be deployed until the end of September.

Scroll through the gallery below to view the latest Covid-19 numbers available on 3 July at the district level. All maps are sourced from provincial health departments. However, KwaZulu-Natal and the Eastern Cape did not provide an update by the time of publishing: 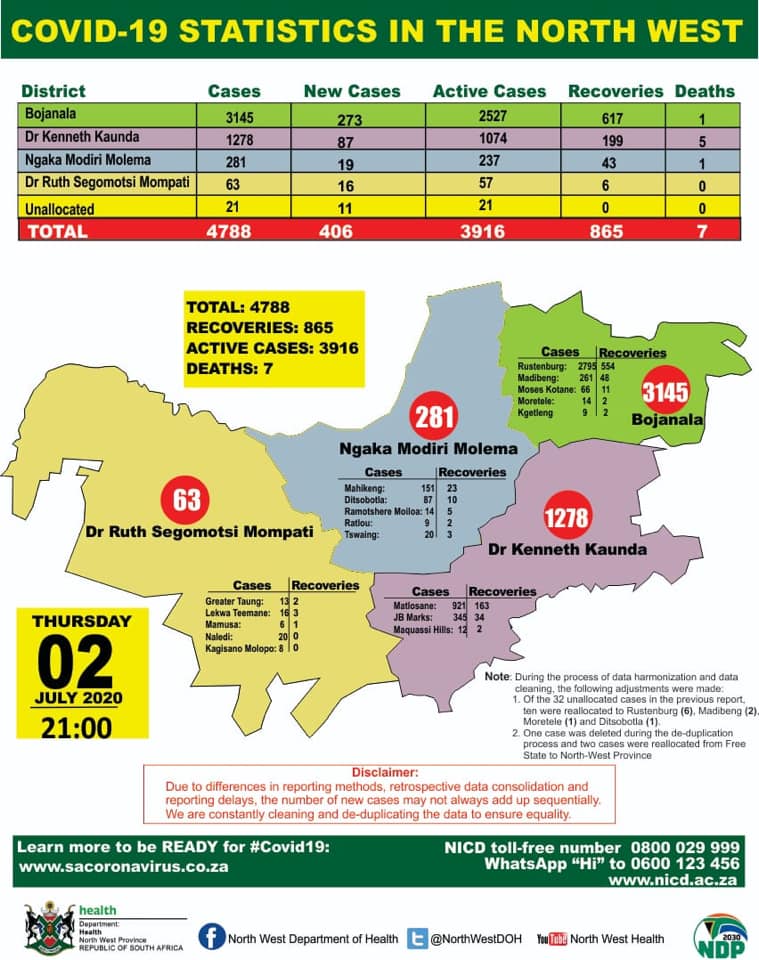 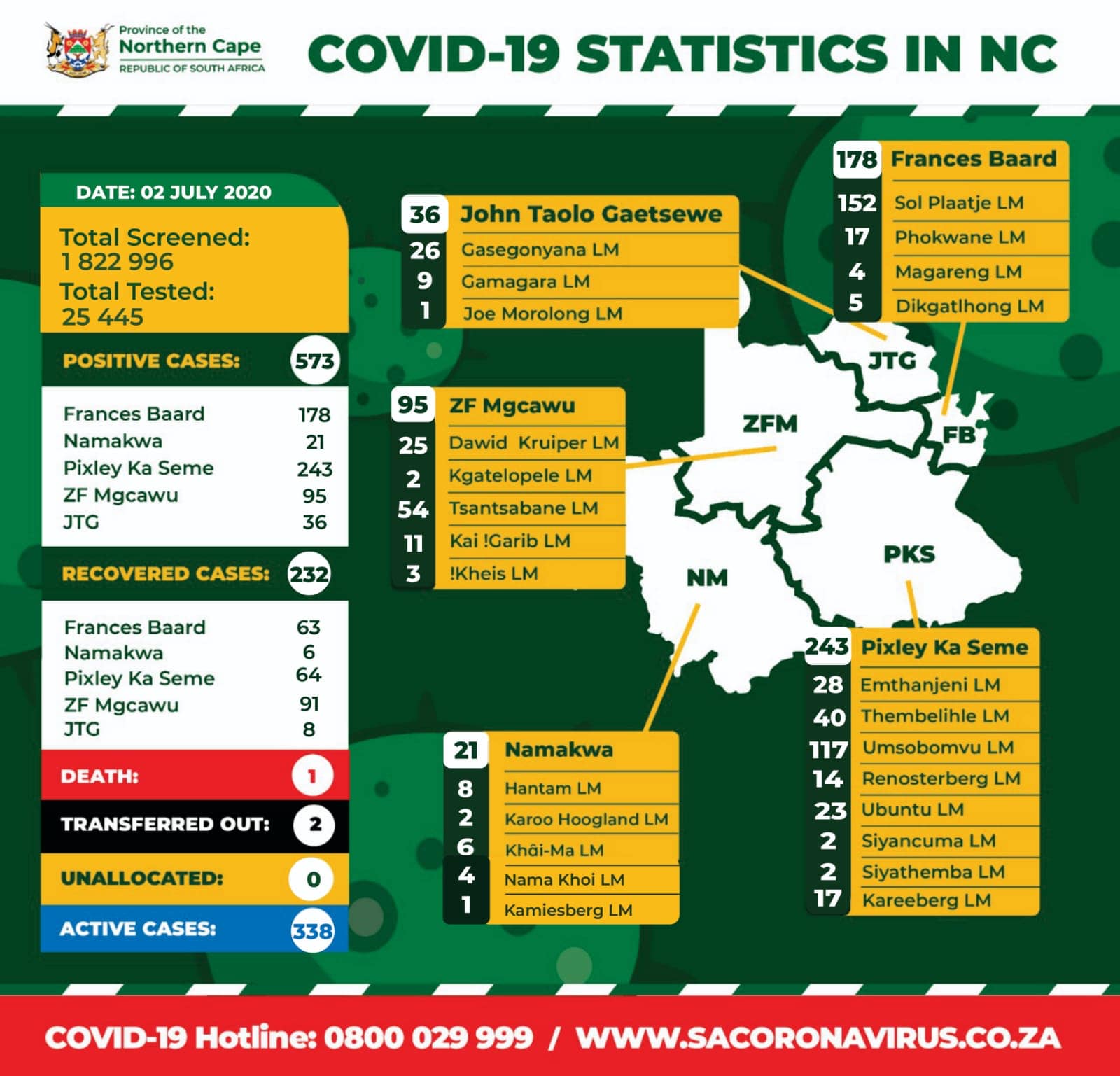 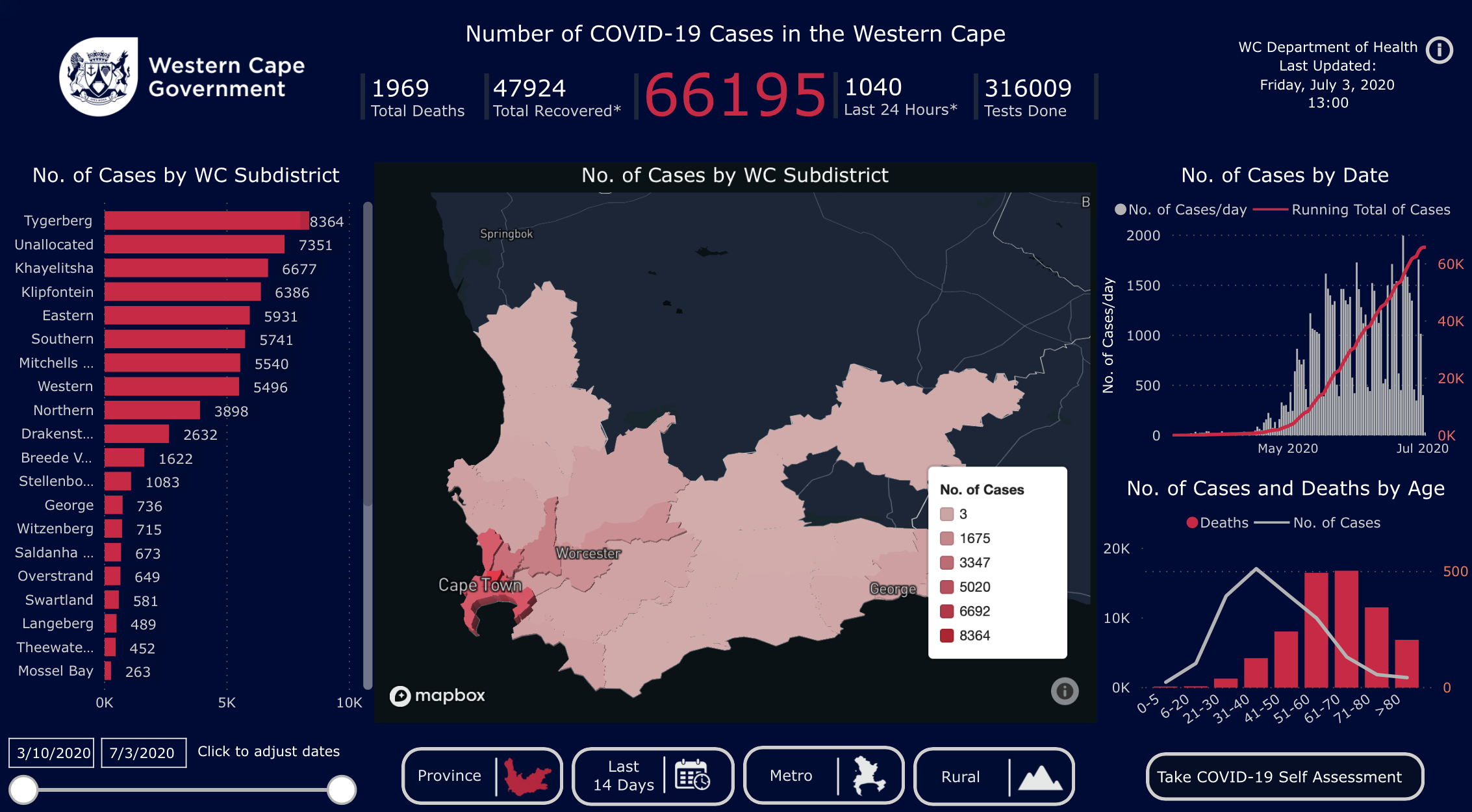 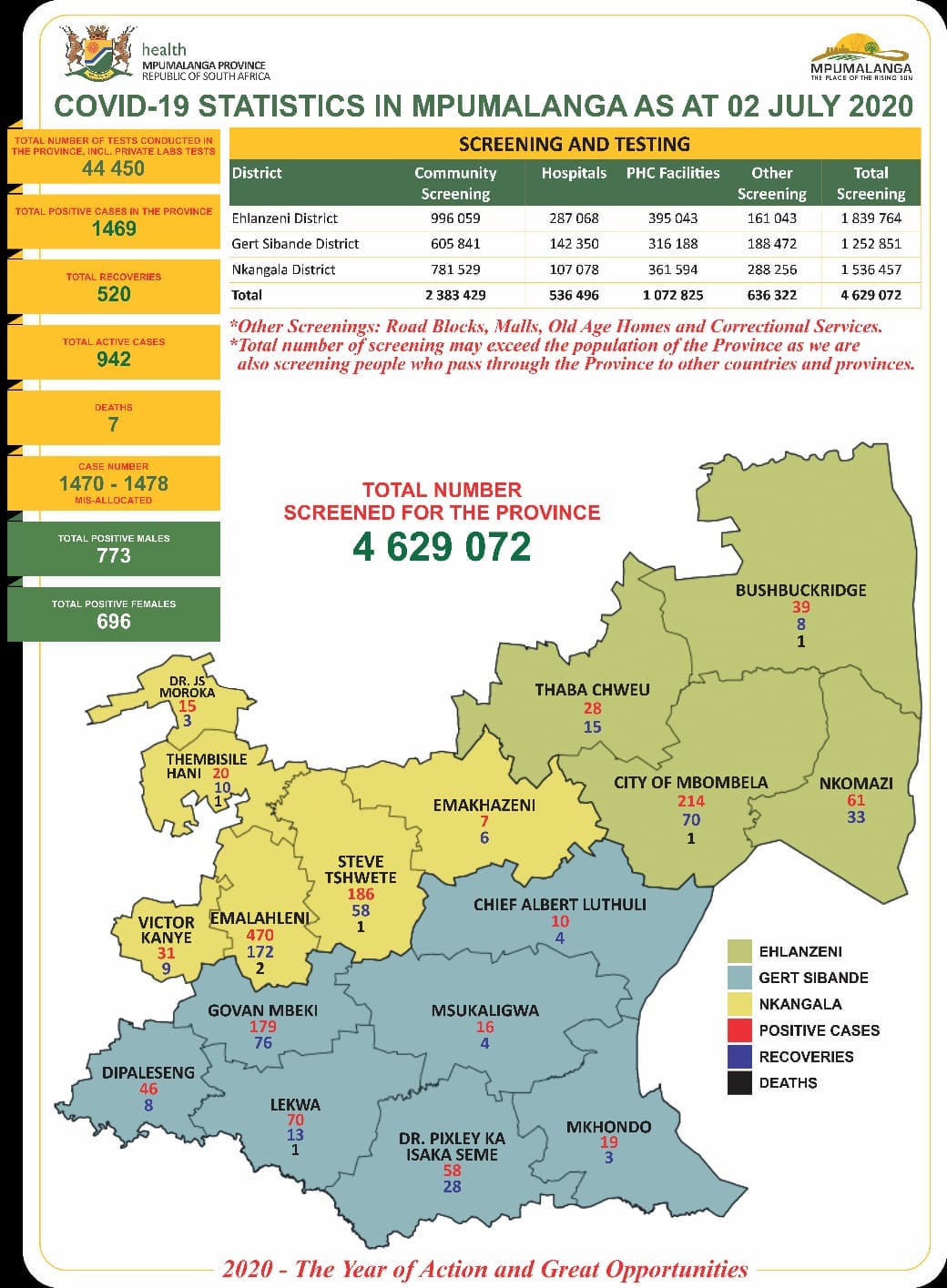 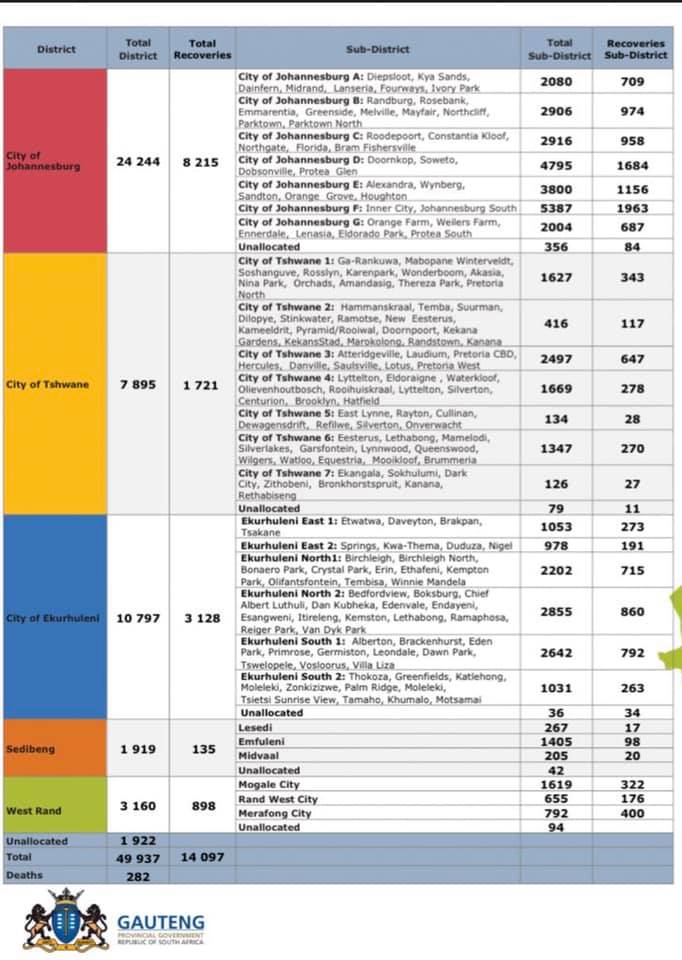 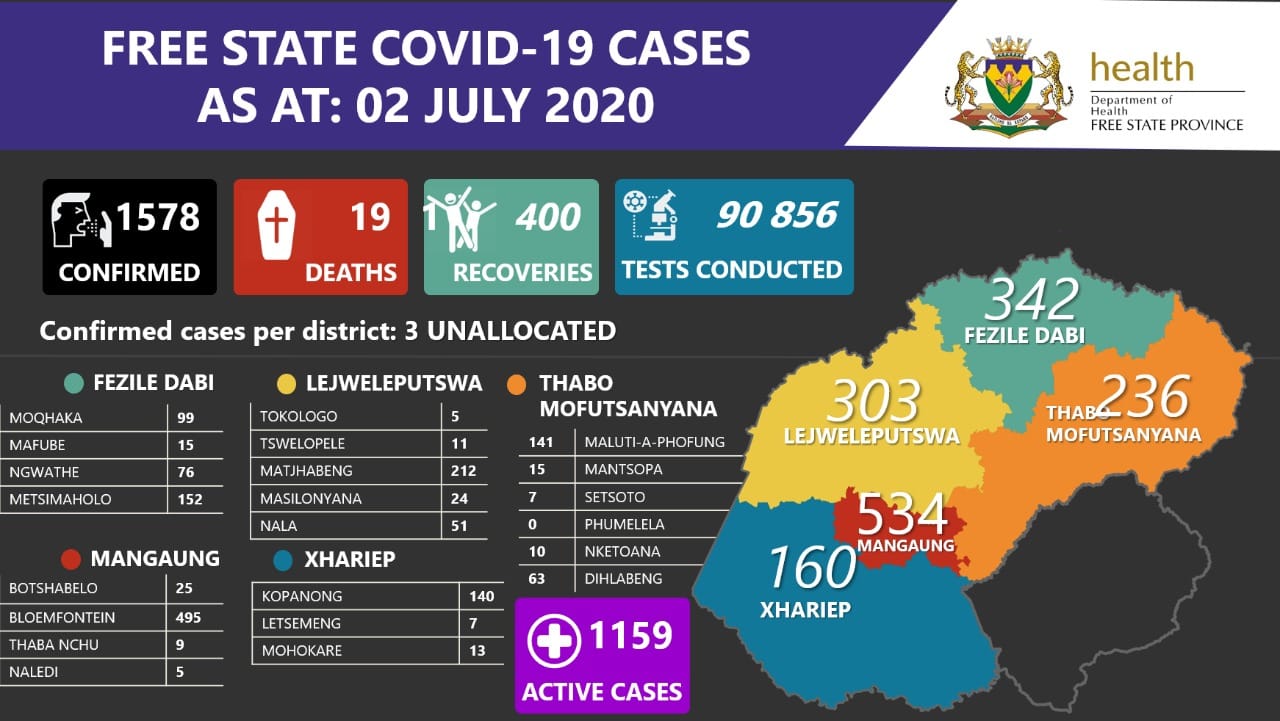 The Eastern Cape’s first field hospital has opened its doors. By Friday morning, the Rev Dr Elizabeth Mamisa Chabula-Nxiweni Field Hospital had admitted eight patients referred from Nelson Mandela Bay’s overwhelmed hospitals. While this facility will provide 3,300 beds once completed, the province says this will not be enough. As Estelle Ellis reports, the province has committed to building a field hospital per district and in Buffalo City to provide a combined total of 4,000 medical beds.

Meanwhile, patients, visitors and employees at the metro’s Livingstone Hospital saw rats licking water the colour of blood that was pouring out of a blocked drain outside the hospital’s main entrance. The provincial Department of Health insists an unknown person put beetroot peels in the drain. Nevertheless, inspectors from the department found that the hospital has not been properly cleaned, did not have enough thermometers to screen people, and noted that rubbish was piling up again. As Estelle Ellis reports, the investigation is ongoing.

The National Health Laboratory Service has ended its use of the courier company which lost Covid-19 test samples along the N2 in the Eastern Cape. They said the incident violated the patient’s rights to protection of their medical records, privacy, confidentiality and dignity. They added that it could have endangered the lives of the patients and the public.

Meanwhile, 20,000 South African National Defence Force members will be deployed until the end of September to enforce Covid-19 lockdown restrictions. They will work with the police, state departments and control the borders.

Only three out of the seven grades scheduled to return to their classrooms next week will do so, according to the Department of Basic Education and other education authorities. This latest decision will affect all provinces, and the other grades will be phased in over July until “normality” is reached in August, according to the department. It will publicise the new plan over the coming weekend.

Meanwhile, judgement was reserved in the matter between Equal Education and the Department of Basic Education over the resumption of the national school feeding nutrition programme. Mark Heywood unpacks the legal arguments and writes that “this case is probably one of the most important of the democratic era”. DM