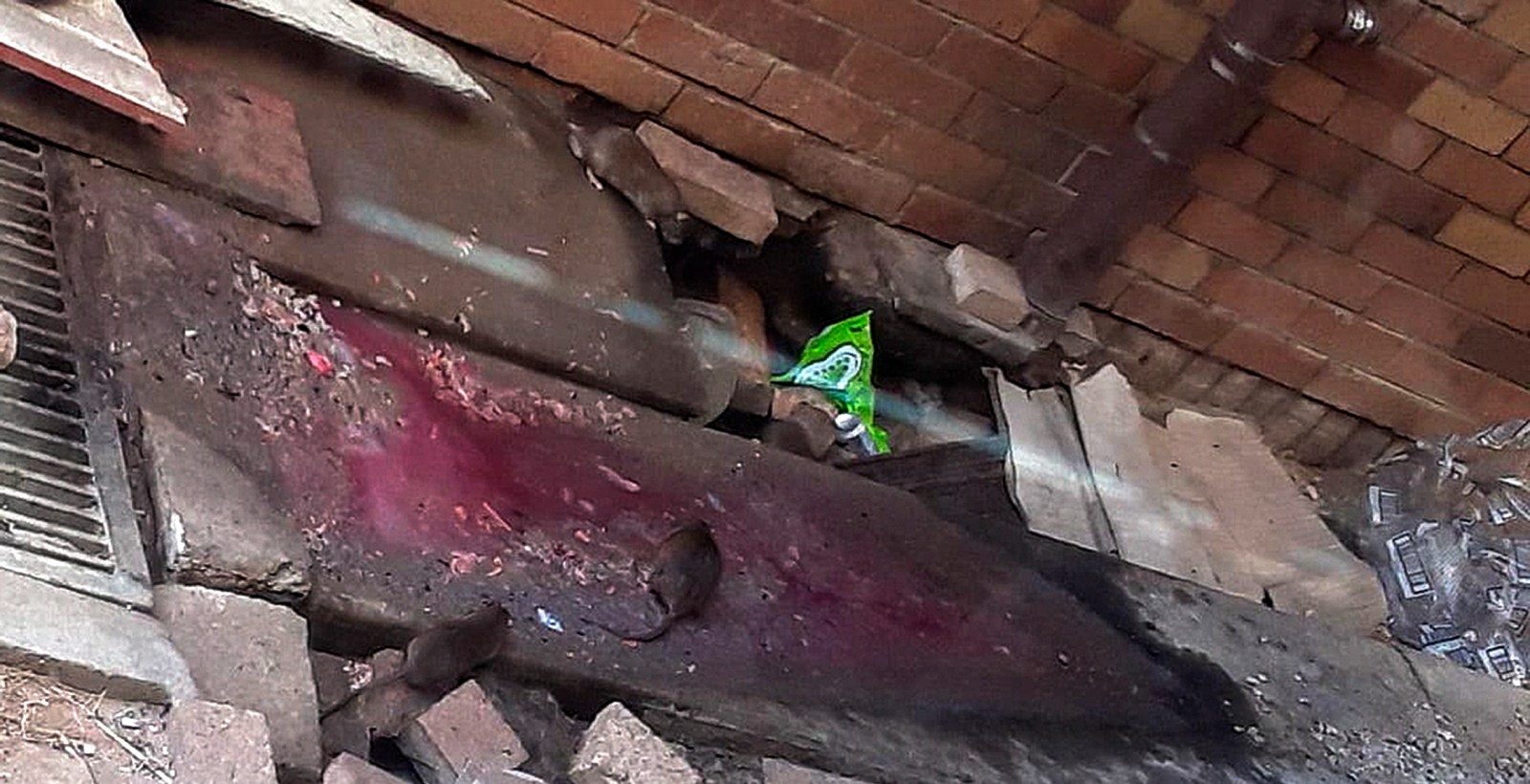 After the matter was raised with the Department of Health the drain was unblocked, but the rats remained behind. (Photo: Supplied)

Patients, visitors and employees at Port Elizabeth’s Livingstone Hospital were met by the horrifying sight of rats licking at water the colour of blood pouring from a blocked drain on Thursday 2 July. This was within days of the facility dismally failing a safety inspection — but the Department of Health insisted that an unknown person had put beetroot peels down the drain at the hospital, causing the water to go red.

Inspectors from the Eastern Cape Department of Health found that Livingstone Hospital had not been properly cleaned and did not have sufficient thermometers to conduct visitor and employee Covid-19 temperature screenings. There were also no compliance officers at the hospital.

Rats were seen licking at od-tainted liquids spilling from a drain outside Livingstone Hospital’s main entrance. This comes as rubbish is once again piling up at the facility, a designated Covid-19 hospital in Nelson Mandela Bay — one of the viral hotspots in the Eastern Cape.

The municipality dispatched a team to investigate and the drain was later unblocked, but investigations are ongoing into the nature and origins of the liquid that the rats were drinking. A giggling director of communications for the department, Siyanda Manana, said that someone had blocked the drains with beetroot peels and that this has made the water red. “It looks like blood but it is the beetroot peels,” he said. “We don’t know where this came from. It could be from anywhere in the hospital.”

Hospital staff have described the battle to treat and save Covid-19 patients at the hospital as fighting a “diabolical enemy”.

Following the suspension of the entire top management of the hospital, the hospital has had six acting CEOs. Two weeks ago, the superintendent-general of the province’s health department, Thobile Mbengashe, promised to send senior department staff to the facility “to strengthen the management”. He also promised that 100 general assistants were being appointed “as we speak”. Neither Manana nor communication officer Sizwe Kupelo could answer as to whether this was done yet.

Covid-19 positive patients, or sick patients waiting for results, sleep on the floor as a promised upgrade of the hospital basement to create extra space for beds did not materialise.

A few weeks ago, the casualty unit sent out an emergency message that only the most critically ill patients would be accepted at the facility due to dangerously unsanitary conditions. In June, staff at Livingstone Hospital went on a go-slow strike after a disagreement over overtime pay. This was resolved and the hospital was subsequently cleaned.

Hospital sources said since then, the facility has again been sliding into abject and dangerous squalor. Used PPE is simply discarded and can be seen lying in passages and on benches.

Laundry is not being done regularly and patients are told to bring their own linen. Disposable gowns are used as hospital gowns are not cleaned in time.

According to the report, no compliance officers had been appointed to monitor screening at the hospital due to “an oversight by management” and a shortage of staff.

“We noted that the facility has no consequence measures in place for non-compliance of the use of the required personal protective equipment,” the audit stated. “Verbal reminders are given to employees only. Regular sanitising of surfaces and the building is not maintained. Commonly used areas (kitchens, canteens, toilets) are not regularly sanitised.

“This non-compliance with the use of the required PPE and regular sanitisation of surfaces and the buildings creates the risk of spreading the virus to employees and patients/public. This may result in the spread of the virus to the community and the closing of the facility. Furthermore, if the required PPE is not used properly and sanitisation is not done, the staff may be accused of being negligent and [this] may have financial implications for the department,” the document stated.

The audit added that management must ensure that PPE is used correctly and that the hospital is cleaned regularly and surfaces, kitchens, toilets and consulting rooms are washed down with soap and sanitised.

“Staff must be constantly reminded that if these protocols are not adhered to, they put themselves and the patients/public at risk. Management should put measures in place to ensure that staff adhere to all protocols relating to PPE and sanitisation of surfaces and the building, and disciplinary action should be taken against staff who do not comply.”

The audit also found that visitors were not screened daily and there was no full record of people who visited the hospital “and a person who might have symptoms of the virus is allowed to enter the facility”.

“Furthermore, staff are not screened daily before they start a shift. The temperature is not taken at the admin block due to a lack of thermometers,” the report read.

The report found that security guards were not adequately trained in how to handle visitors and that the hospital lacked thermometers.

According to the report, no compliance officers had been appointed to monitor screening at the hospital due to “an oversight by management” and a shortage of staff.

“The Compliance Officer should also ensure that all staff and patients/public comply with all Covid-19 regulations and guidelines at the facility (wearing masks; washing hands with soap/sanitising hands and the sanitising of surfaces.

Regional hospitals like Dora Nginza Hospital in Port Elizabeth have been flooded with patients after several clinics in the area, including maternity-on-call units for uncomplicated delivery of babies, were closed down by managers for deep cleaning or the testing and isolating of staff.

“Proper waste management protocols must be maintained, bags must be sealed and placed in a safe and secure space ready for collection by the waste company.”

“There is an inspection of the site going on currently. So the hospital will get our recommendations on the corrective action needed,” she said.

“We have massive problems there with Covid-19. We can’t afford to have another bubonic plague as well,” Manana said.

This comes as Mbengashe sent a strongly worded missive to all hospitals on Monday, forbidding them to close hospitals or clinics for deep cleaning or staff testing unless he has given permission.

Regional hospitals like Dora Nginza Hospital in Port Elizabeth have been flooded with patients after several clinics in the area, including maternity-on-call units for uncomplicated delivery of babies, were closed down by managers for deep cleaning or the testing and isolating of staff.

“Closure of all health facilities is strictly prohibited,” Mbengashe wrote.

Ntsiki Mpulo from the Eastern Cape Health Crisis Action Committee said conditions at Livingstone Hospital had deteriorated catastrophically in the recent past.

“The desperate situation at the hospital has resulted in a violation of patients’ right to receive healthcare. The department has also failed in its obligation to meet patient needs. Any further dereliction of duty by the department of health under the Covid-19 pandemic will result in severe morbidity and mortality in the province.

“We have written to the Minister of Health asking for national oversight over conditions at the hospital, and to intervene to the extent necessary to ensure that the rights of patients are upheld,” she said.

According to the latest figures released by the Eastern Cape health department, Nelson Mandela Bay, with a population of 1.3 million people, now has close to 8,000 cases. The suburb of Motherwell has registered over 1,000 people who tested positive for the coronavirus.

Acting mayor Thsonono Buyeye has called for the metro to be placed in hard lockdown again.

“Hospitals are not coping. Police stations and clinics often have to close because of Covid-19,” he said. “Beds are running out in the health facilities.”

“You can’t stop the spread of the virus if people are moving around and socialising without wearing masks, which is the most critical protective gear to fight the virus,” said Shane Brown, head of disaster management in the metro.

Jane Cowley from the Democratic Alliance said she will immediately write to the MEC for Health in the province, Sindiswa Gomba, to ask about steps to ensure that the hospital is properly staffed.

“An already compromised system takes even further strain with staff members either being quarantined or actively infected. The situation at the hospital is critical. While the severely reduced workforce continues to try to provide healthcare to patients inside the building, the rats are feasting on the filth outside unperturbed,” she added. DM/MC