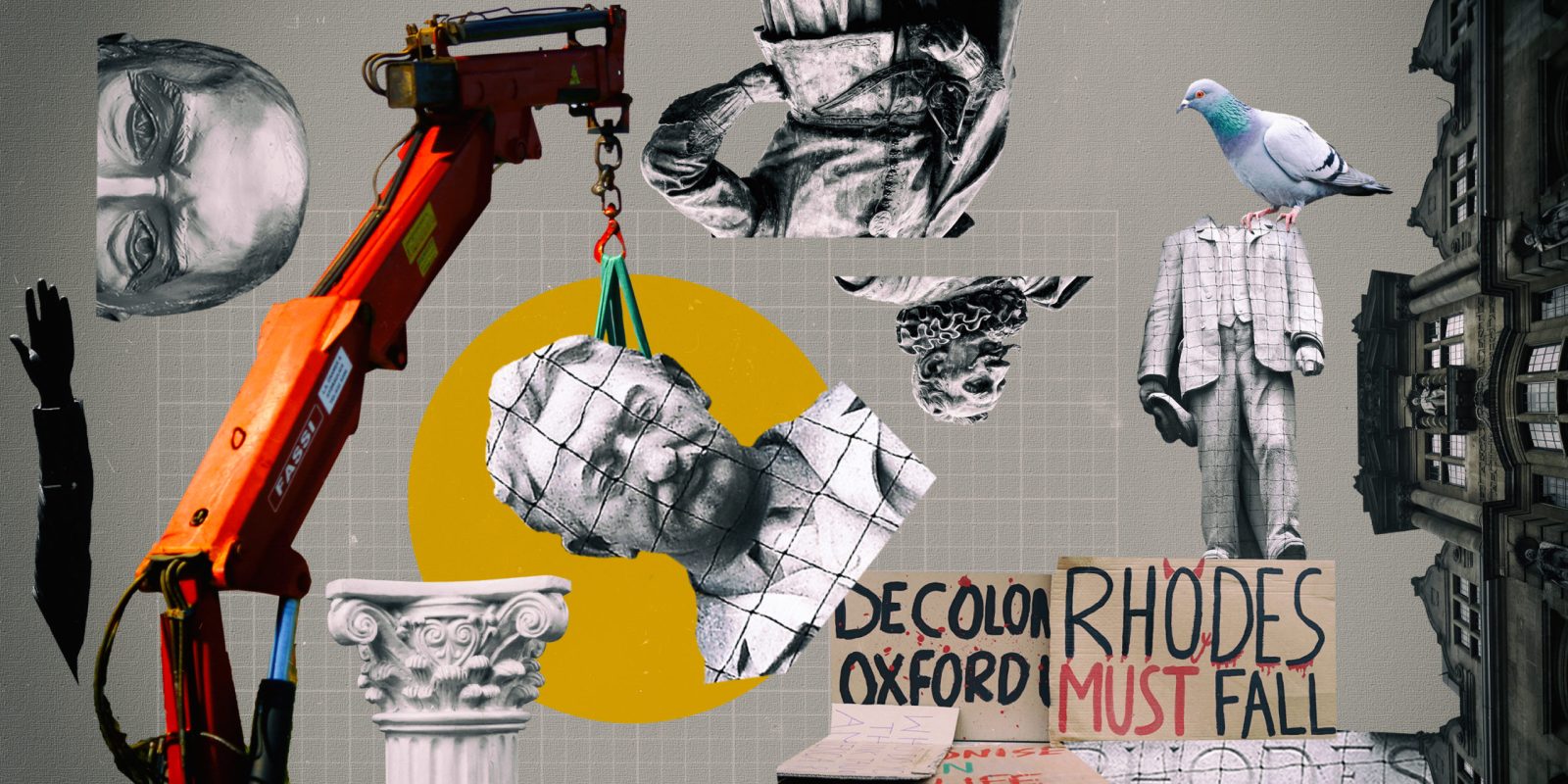 ‘The most dogmatic, racist memorials are truly whited sepulchres, in that they are inhabited by a sense of absence and lack which does not even have the substance of haunting.’ – Prof David Bunn.

There, elevated in death and stone as much as he elevated himself in life, Rhodes, the megalomaniacal tyrant, a cross between “Caesar and PT Barnum”, gazes imperiously down his nose at the world below.

The push to remove Rhodes’ statue from Oxford was inspired by South Africa’s 2016 #RhodesMustFall student movement, but in Britain (and in certain quarters in South Africa) the demand faced predictable establishment pushback.

Now, with the global #Blacklivesmatter movement sweeping former centres of imperial and colonial power and the forcible removal by protesters of a gallery of stone rogues, Rhodes in stone and iron has drifted back into view.

Rhodes Memorial was completed in 1912, 10 years after Rhodes had died, and after a design by Baker, who was essentially Rhodes’ personal architect, a tradition Adolf Hitler continued with Albert Speer in the 1940s.

In Antwerp, Belgium, a statue of Leopold II, a savage and genocidal royal who regarded the Congo as a personal fiefdom, has been torched in protests. This prompted skittish local authorities to remove the damaged chunk of iron to safety in the Middelheim Museum.

Across the US, statues and memorials to slave owners and confederate leaders have been toppled or trashed. Christopher Columbus himself was beheaded in Boston.

The memorialisation and fetishisation of empire, violence, subjugation and accumulation in the West has never before faced such global resistance.

“These monuments are present not just in public space, but also in people’s mentalities,” said Joëlle Sambi Nzeba, a spokeswoman for the Belgian Network for #BlackLivesMatter, capturing the essence of the moment.

To meet Rhodes’ gaze – either at Oxford or across the South African landscape where he has been cast in stone in the buildings of his architect, Sir Herbert Baker – is to rencounter, as Professor David Bunn has written, a “white imperial monumentality” intended to signify “unmediated political power”.

The late Harry Garuba, professor in the African Studies Unit at the University of Cape Town, once prompted me, during a chat about colonial architecture, to contemplate specifically the Rhodes Memorial, that granite confectionary on the slopes of Devil’s Peak facing northwards across the Cape Flats.

“What kind of mind would dream up and manifest that?” Garuba asked.

Rhodes Memorial was completed in 1912, 10 years after Rhodes had died, and after a design by Baker, who was essentially Rhodes’ personal architect, a tradition Adolf Hitler continued with Albert Speer in the 1940s.

Bunn, writing in a collection titled blank_Architecture, Apartheid and After, edited by Hilton Judin and Ivan Vladislavic (David Philip), noted that Baker’s projects for Rhodes revealed a man “whose building in the present” was “already of monumental proportions”.

With these buildings and statues, carved out of local stone, writes Bunn, Baker and Rhodes had hoped to reshape the very geography of the South African colony enabling a “metonymic association between settler identity and natural landscape”.

White imperial monumentality, says Bunn, is “stylistically and politically regressive, always longing for an older mode of administration in which paternal authority is invested with wide, unmediated political powers”.

It was Baker too who designed the statue of Rhodes that now stands amid the lush greenery of Cape Town’s central Company’s Gardens.

The inscription below proclaims: “Your hinterland lies yonder”, while Rhodes gestures vaguely south with his left arm – raised in what today could be mistaken for a “Sieg Heil” – while his right arm is relaxed, with his hand clutching his hat.

The possessive pronoun “your” on the plinth motto most certainly does not refer to the black South African majority.

For, if monuments and statues are intended to prompt a passerby to stop and reflect, a black encounter with Rhodes in the Company’s Gardens can only be exclusive, excluding, unseeing, unconscious.

Writes Bunn: “Colonnaded like the cloisters and quads of Baker’s Parktown ridge schools, the Lion House is a metaphoric extension of Rhodes’ own powerful, restless presence.

“It is a projection of his spirit onto the world; as a collector of lions, and as a restless, pacing imperial force trapped by the dull, unadventurous sensibility of London bureaucrats. It appears to be a cross between Caesar and PT Barnum.”

Phineas Taylor Barnum’s Wiki biog sets out that he was “an American showman, politician, and businessman remembered for promoting celebrated hoaxes and for founding the Barnum & Bailey Circus (1871–2017).”

The British themselves were prone to a bit of statue destroying, mind you.

There is no single statue of Adolf Hitler anywhere in Germany.

So disturbing were the Afrikaanse Taalmonument in Burgersdorp and the Paardekraal Monument in Krugersdorp that during the South African War (or alternatively the Anglo-Boer War or the Second War of Independence) British troops “went out of their way to deface memorials” such as these.

“But more than any other,” writes Bunn, “it was the Paardekraal Monument they hated. Paardekraal began as a cairn of rocks erected spontaneously by a Boer crowd incensed at the memory of the annexation of the Transvaal.”

Later, a stone obelisk was built to enshrine the cairn while allowing it still to be viewed through an iron grille at the base.

“In the course of the South African War, the British wrenched out the original stones and tipped them from railway trucks into the Vaal River.”

Why were the British so determined to destroy the Paardekraal obelisk? asks Bunn.

Perhaps they understood “something about the relationship between monuments, ideology and national memory that remains opaque to us”.

For the English colonists, statues and memorials served as “meditative stopping points in a landscape circuit” for which there is “no local audience”.

The earliest memorials erected by white English-speaking settlers were like “fortified watchtowers, signalling to distant pockets of white citizenry, while defending themselves at the base against local attack”.

There is no permanent public statue commemorating Patrice Lumumba in Belgium. Lumumba, the first freely-elected prime minister of the Congo, was murdered by Belgian authorities in collusion with the CIA in 1961.

Afrikaner monuments, notes Bunn, sought less to monumentalise political pretensions than to locate an “originary inscription” and a single founding narrative of “nationhood” for a disparate bunch of Trekboers who fled the Cape, their British overlords and the abolition of slavery.

The absence of any engagement with questions of black citizenship means that no monument can claim to represent “nationhood” fully.

“The most dogmatic, racist memorials are truly whited sepulchres, in that they are inhabited by a sense of absence and lack which does not even have the substance of haunting,” Bunn notes.

There are those who argue that to remove the statues and memorials would be to forget and erase history.

But it is an argument that does not wash. There is no single statue of Adolf Hitler anywhere in Germany.

While establishment Europe and America cling to memorials and theatrical annual commemorations celebrating perceived great historical figures, the victims of these enslaving ideologies are ordered to “get over it”, to “forgive and forget”.

There is no permanent public statue commemorating Patrice Lumumba in Belgium. Lumumba, the first freely-elected prime minister of the Congo, was murdered by Belgian authorities in collusion with the CIA in 1961.

The cardinal of Westminster ordered that the body of French warrior Joan of Arc be burnt twice and her ashes thrown into the Seine in an attempt to erase her memory.

Gerard Soete retrieved one of Lumumba’s teeth as a keepsake. The tooth is now kept in the vaults of the Belgian judiciary while the former Congolese leader Joseph Kabila prevented its return to Congo, fearing it might serve as a “shrine” to the communist leader.

In 2018 a Brussels gallery installed a life-sized movable sculpture of Lumumba made of, wait for it, sawdust.

In 2002, during the “Gulf War” there was hardly a peep from the West when a 12m statue in Iraq’s Firdos Square honouring Saddam Hussein was toppled and destroyed with the help of the US Marine Corps.

In the end, that is what statues are made for – to be toppled.

There are few or no sacred spaces for remembering those heroes of a revolution, vanquished by stronger forces of might.

The Archbishop of Westminster ordered that the body of French warrior Joan of Arc be burnt twice and her ashes thrown into the Seine in an attempt to erase her memory.

Bunn writes that apartheid’s worst torturers “relied absolutely on the fact that it was possible to kill, maim and massacre without any record of their actions passing into the public domain, let alone monumental tradition”.

There is, he writes, a complete disjuncture between personal suffering and public memory in South Africa.

“When policemen like Gideon Niewoudt burnt the bodies of Siphwe Mtimkulu and Topsy Madaka, wrapped the ash and bone in fragments in rubbish bags and dumped them into the Fish River, they expected the waters to obliterate all traces of their victims,” writes Bunn.

Some time after the Truth and Reconciliation Commission where the truth of what happened to Mtimkulu and Madaka was finally unearthed, “a simple ceremony was held at the approximate site where the bone and ash was thrown into the river. Those who had gathered to remember tossed wreaths into the water and watched them carried away towards the sea.” DM