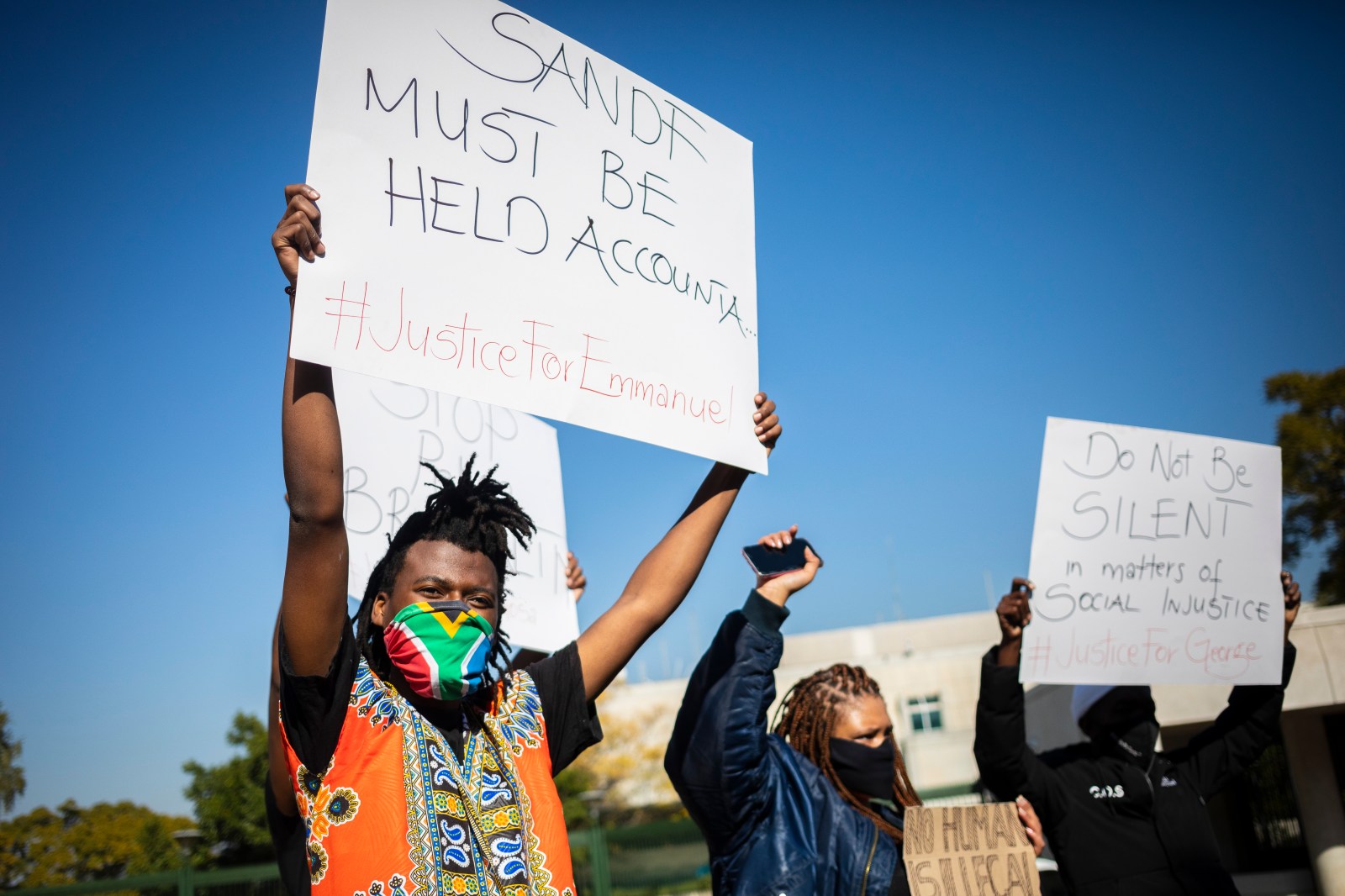 Demostrators during a Black Lives Matter protest outside the embassy of the USA in Pretoria, South Africa, 05 June 2020. The protesters demonstrated against the death of George Floyd in the United States as well as the death of South African Collins Khosa who was allegedly killed by SANDF (South African National Defence Force) members during a Covid-19 Corona virus lockdown patrol. (EPA-EFE/Kim Ludbrook)

The SANDF exonerated soldiers implicated in Collins Khosa’s death, but eight witnesses have told police watchdog IPID they witnessed his assault. IPID has recommended that disciplinary action be taken against five metro police officers who failed to intervene.

Eight witnesses have told the Independent Police Investigative Directorate (IPID) they saw SANDF members assault Collins Khosa hours before he died due to blunt force trauma to the head,   raising further questions about a military board of inquiry that exonerated its members.

IPID spoke to the eight witnesses, neighbours and family members who were present when SANDF members confronted Khosa and his brother-in-law in Alexandra, as part of its investigation into the Johannesburg Metro Police Department’s (JMPD) role in Khosa’s death.

“Majority of witnesses corroborated one another confirming that the [sic] when some of the witnesses and the deceased were assaulted by members of the SANDF, JMPD officers witnessed the alleged assaults and did not prevent it,” said IPID’s report.

Khosa died on 10 April 2020 after SANDF members confronted him and his brother-in-law after finding a glass of alcohol in his yard. The soldiers confiscated two beers from their house and an argument started after one of them slammed the gate on Khosa’s car.

The SANDF members said Khosa and his brother-in-law Thabiso Muvhango undermined the female soldiers based on their gender and did not adhere to their instructions so they called for back-up.

The SANDF board of inquiry, which exonerated the soldiers, said “the force used was pushing and clapping” to get the men to return to their house.

It said its members were not responsible for Khosa’s death as there were no contusions on his head and his skull was intact. It said, “Mr Khosa was conscious and healthy when the security forces left.”

However, witnesses said the soldiers said they wanted to “prove a point” and “deal with” Khosa and Muvhango “because they have an attitude”.

The soldiers poured beer on the two men and allegedly held Khosa’s hands behind his back while they choked him, slammed him against a cement wall, hit him with the butt of a rifle, kicked, slapped and punched him.

Multiple witnesses who tried to record the alleged assault told IPID that the soldiers either took their phones or forced them to delete the footage.

Neighbours Glenda Phaladi and Tebogo Mothabela told IPID they both tried to record the incident on their phones. They said the soldiers assaulted them, put them in a JMPD vehicle and took them to the Alexandra Mall, where the SANDF, SAPS and JMPD operation was based.

“On arrival at the Alexandra Mall they were forced into the SANDF truck and the soldiers continued to assault them in the army truck, drove with them and dropped them at the Linksfield off-ramp,” said IPID.

The police watchdog recommended disciplinary action be taken against the five JMPD officers “for the neglect of their legal obligations” after failing to intervene in Khosa’s assault. None of the metro cops present said they witnessed the assault.

Muvhango said he approached JMPD officers after he was assaulted and they told him not to argue with the soldiers.

“The members of SANDF then assaulted him again, now in the view of JMPD officers,” said the IPID report.

The police watchdog initially declined to investigate Khosa’s death because no JMPD or SAPS members were accused of participating in the assault, but it admitted it erred when the case went to court. IPID has a duty to investigate deaths resulting from police action or omission to act.

SAPS is still investigating the soldiers involved in the case, while Defence Minister Nosiviwe Mapisa-Nqakula has instructed the Military Ombudsman to investigate the case after having wrongly claimed that the SANDF board of inquiry had not concluded its investigation. DM