Residents wait in a queue to be tested while health care professional take a break during a local government mass testing deployment in the high density Alexandra township on day 32 of the national lockdown as a result of Covid-19 Coronavirus, Johannesburg, South Africa, 27 April 2020. Stage 5 lockdown is due to end 30 April 2020 when stage 4 will be implemented. EPA-EFE/KIM LUDBROOK

On Tuesday, a high court declared lockdown Level 3 and 4 regulations ‘invalid and unconstitutional’. The Western Cape continued to come under fire for its decision to reopen schools on Monday. The Eastern Cape’s response to Covid-19 has been weakened by a huge backlog of test results and healthcare workers who refuse to work or treat Covid-19 patients. And, while local media have seen record-high audience numbers, their revenue continues to dry up.

Swipe through the gallery below to view the latest Covid-19 numbers available on 2 June at the district level. All maps are sourced from provincial health departments; however, KwaZulu-Natal, Northern Cape, Eastern Cape and Free State did not provide updates by the time of publishing: 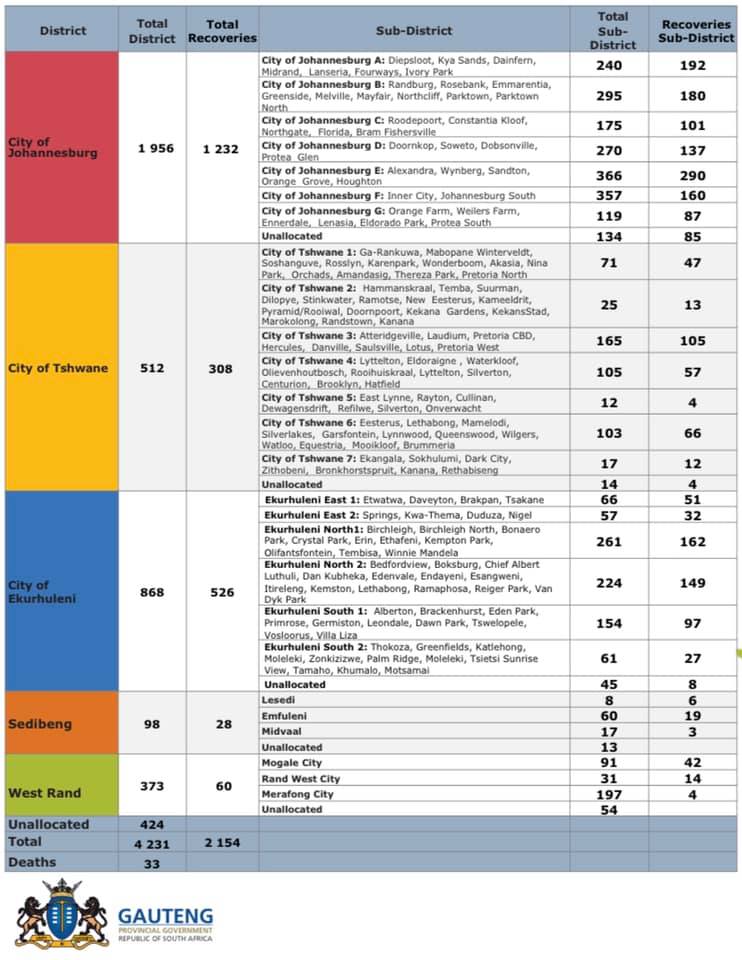 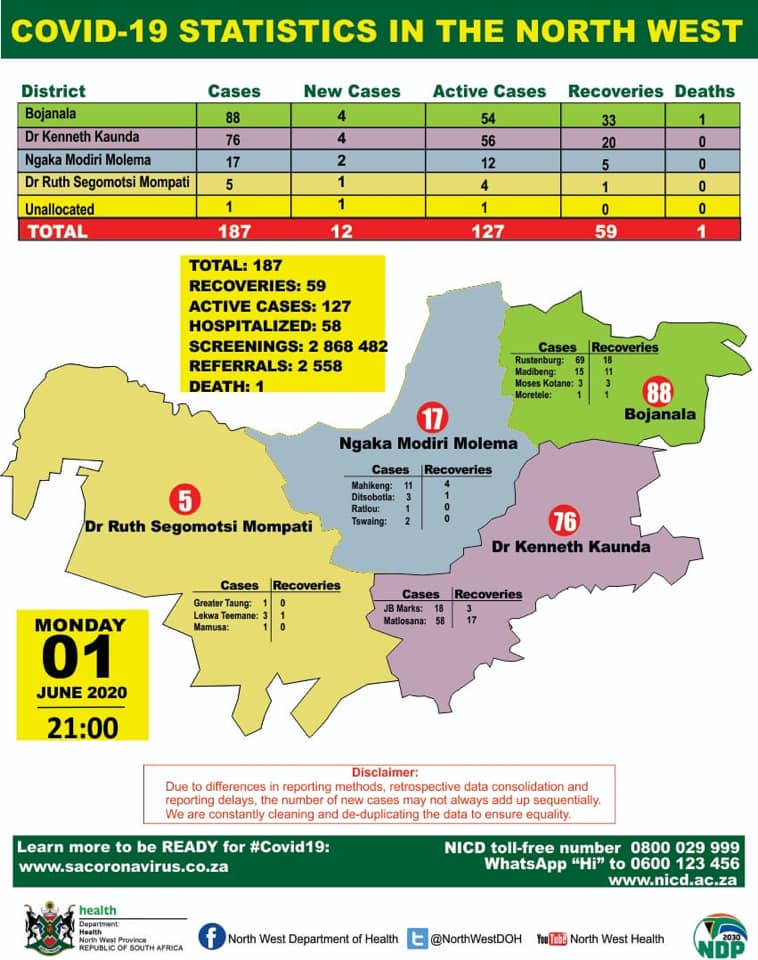 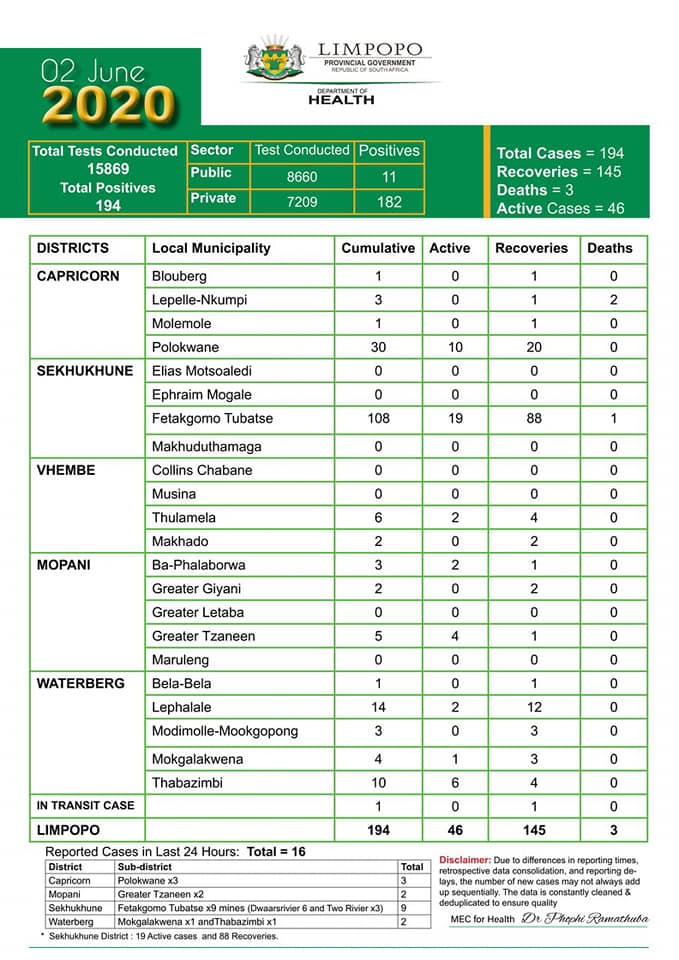 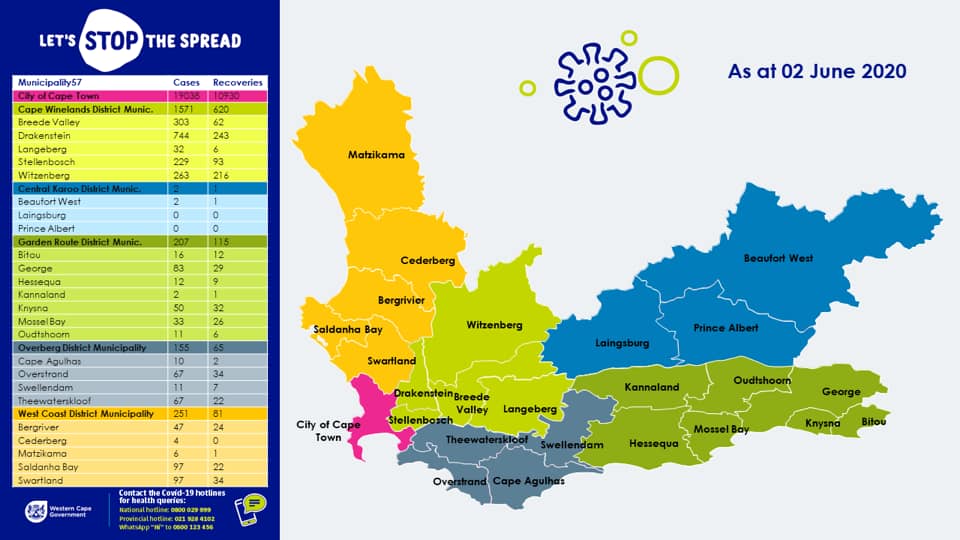 The High Court in Pretoria has declared the lockdown Level 4 and 3 regulations invalid and unconstitutional. It has suspended the declaration of invalidity for 14 days, during which time lockdown Level 3 regulations remain in place. In the meantime, the regulations must be amended and republished by Minister of Cooperative Governance and Traditional Affairs Nkosazana Dlamini Zuma and other relevant ministers.

The SA Human Rights Commission has asked Basic Education Minister Angie Motshekga and Western Cape Education MEC Debbie Schäfer to respond to its concerns about the reopening of schools within a strict deadline – or face court action. It is concerned that the current regulations and the decisions of the Western Cape discriminate between schools that can and cannot comply with requirements like screening, sanitation and physical distancing. The department has said new regulations will be gazetted on Friday, while Schäfer has defended the province’s move to reopen schools.

Gauteng Education MEC Panyaza Lesufi has accused the Western Cape government of acting like a “federal” state by ignoring the instructions of national government to delay the start of school by a week. During an online sitting of the Gauteng Provincial Legislature on Tuesday, he said that the reopening put those schools that weren’t ready at a disadvantage and prioritised privileged schools. As Greg Nicolson reports, the Western Cape and Gauteng are the only provinces deemed ready to open at present.

In the Eastern Cape, more than 21,000 people are waiting for their Covid-19 test results. However, test results are lagging by up to three weeks. This is the result of “logistical challenges” which slowed down the delivery of extraction and test kits to the province’s laboratories. As a result, the province’s testing strategy will need to change, according to the National Health Laboratory Services. Estelle Ellis writes that some clinics have closed after nurses refused to work without knowing if they had the virus.

Daily-Digest-Backlog-One: An infographic explaining how testing backlogs will be managed in South Africa, published by the South African government on its Twitter account on 2 June. Photo: South African Government. 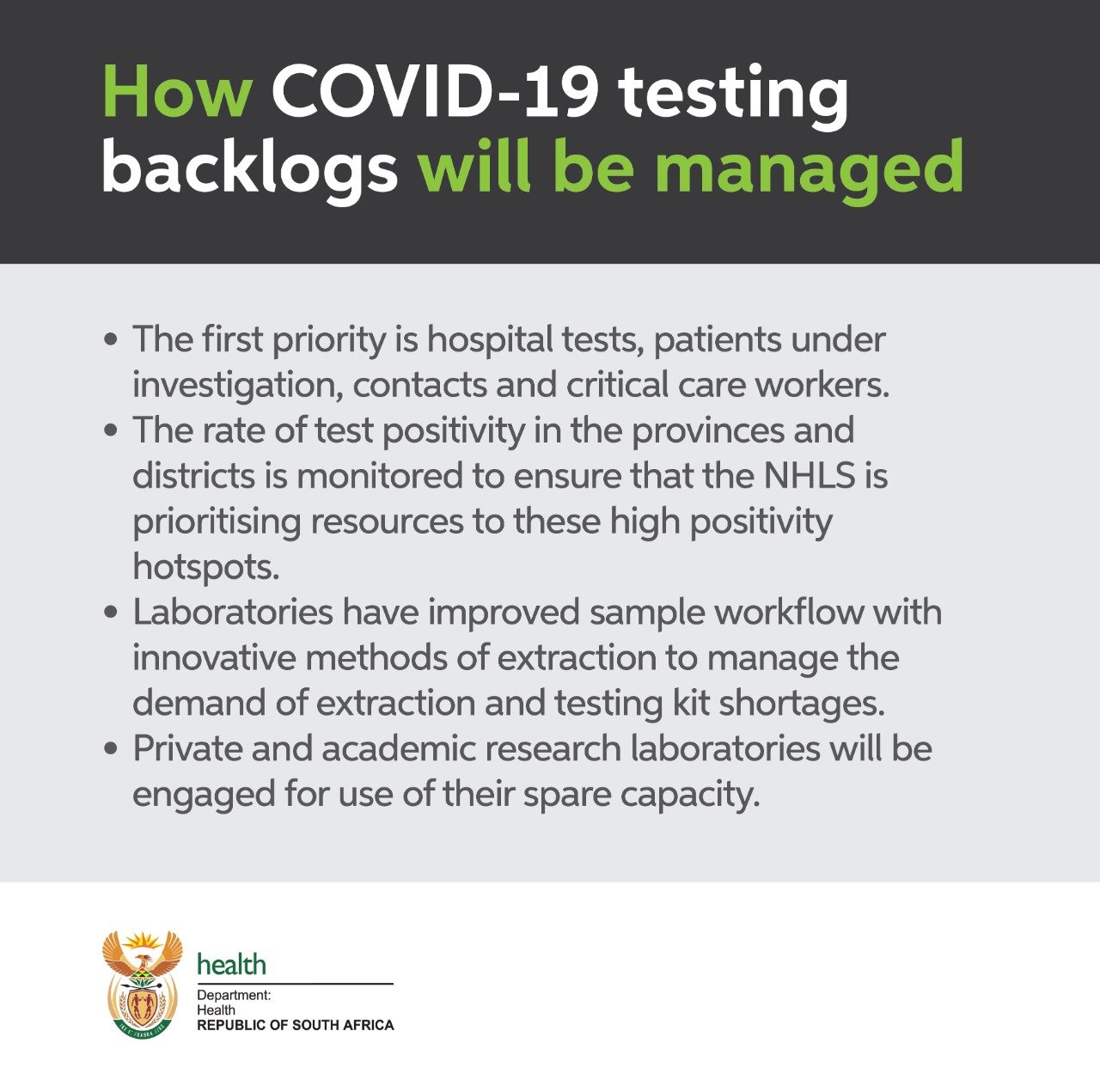 Daily-Digest-Backlog-Two: An infographic explaining how testing backlogs will be managed in South Africa, published by the South African government on its Twitter account on 2 June. Photo: South African Government. 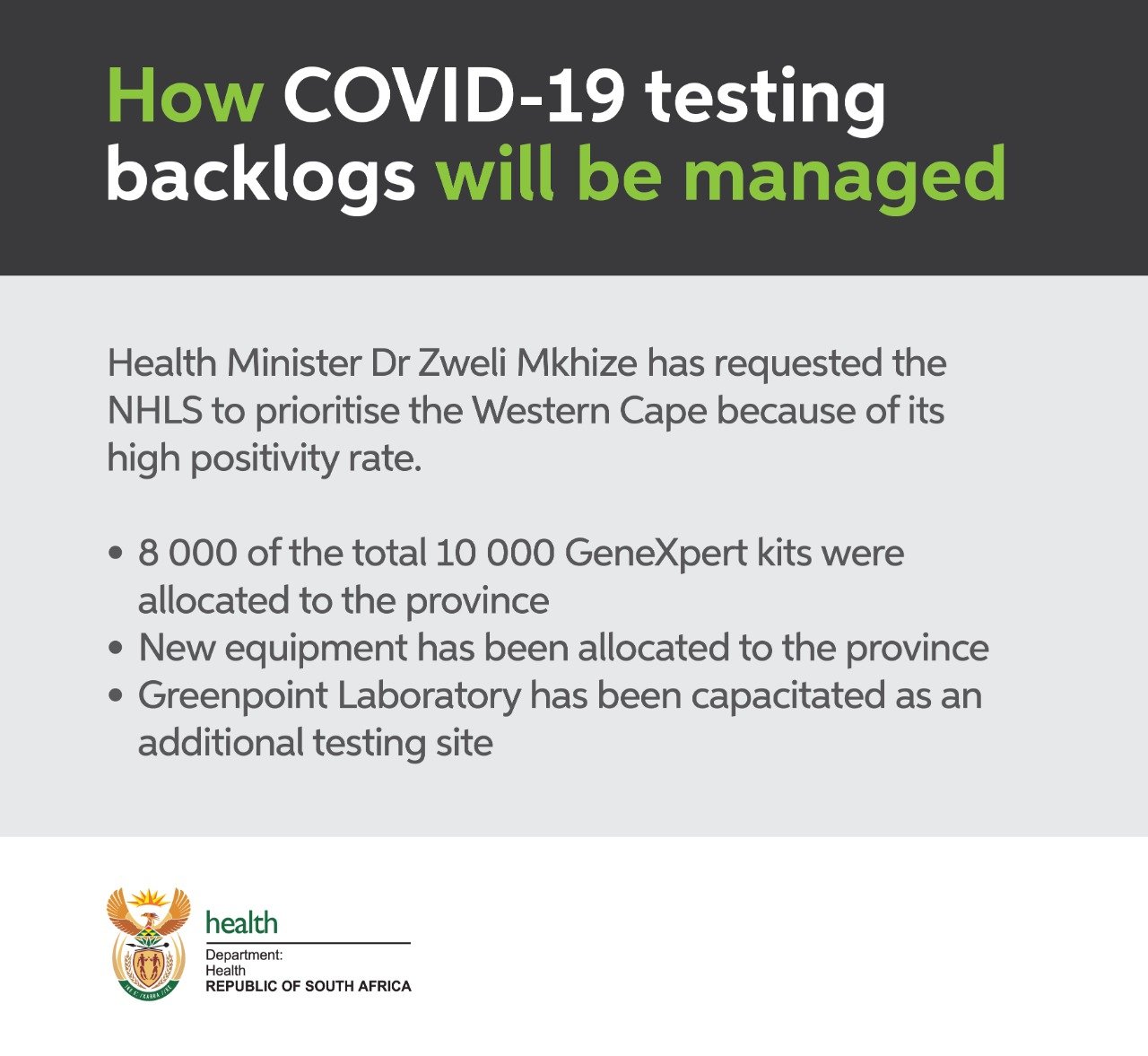 Meanwhile, state hospitals in the province have been further weakened after some employees refused to work or treat Covid-19 patients. There were 6,000 vacancies even before the pandemic and legal claims have eroded the budget for new appointments. However, some workers say they don’t have proper leadership, training or protective equipment. As Estelle Ellis reports, the provincial department is aware of the issue.

As of last week, 110 healthcare workers in the public sector had tested positive for Covid-19 in the Western Cape and six had died. Anncha Kepkey, a nurse at Tygerberg Hospital, was one of them. Her husband spoke to Biénne Huisman about Anncha’s passion for nursing and the last days of her life.

South Africa’s local media has never had such high demand, but the loss in advertising revenue has been disastrous, according to a new report from the South African National Editors Forum. From magazines to broadcast, all sectors have seen plunging revenue. In some cases, advertising has plunged by between 40% and 100%. On the other hand, traffic to online news sites increased by 72% in March.

So far, 80 community newspapers have closed, journalists have been told to accept pay cuts and freelance journalists have lost up to 70% of their income. The authors of the report have suggested an emergency relief fund for the industry. As Rebecca Davis writes, they nonetheless stressed that the crisis shows that people want reliable news, and some positive changes might happen in the industry to improve it.

South Africa’s football bodies have adopted a report and protocols for return to play set out by the joint task team of the South African Football Association and the Premier Soccer League. Professional contact sports can return to training under Level 3, but complete return to play is only expected under Level 2. As Yanga Sibembe writes, they have two weeks to send this proposal to Minister of Sports, Arts and Culture Nathi Mthethwa.

With Super Rugby 2020 out of the picture, New Zealand has created a newly restructured competition called Super Rugby Aotearoa to take its place from 13 June 2020. Craig Ray explains how the game will be played differently. DM