Eastern Cape hospitals in crisis as health workers stay away 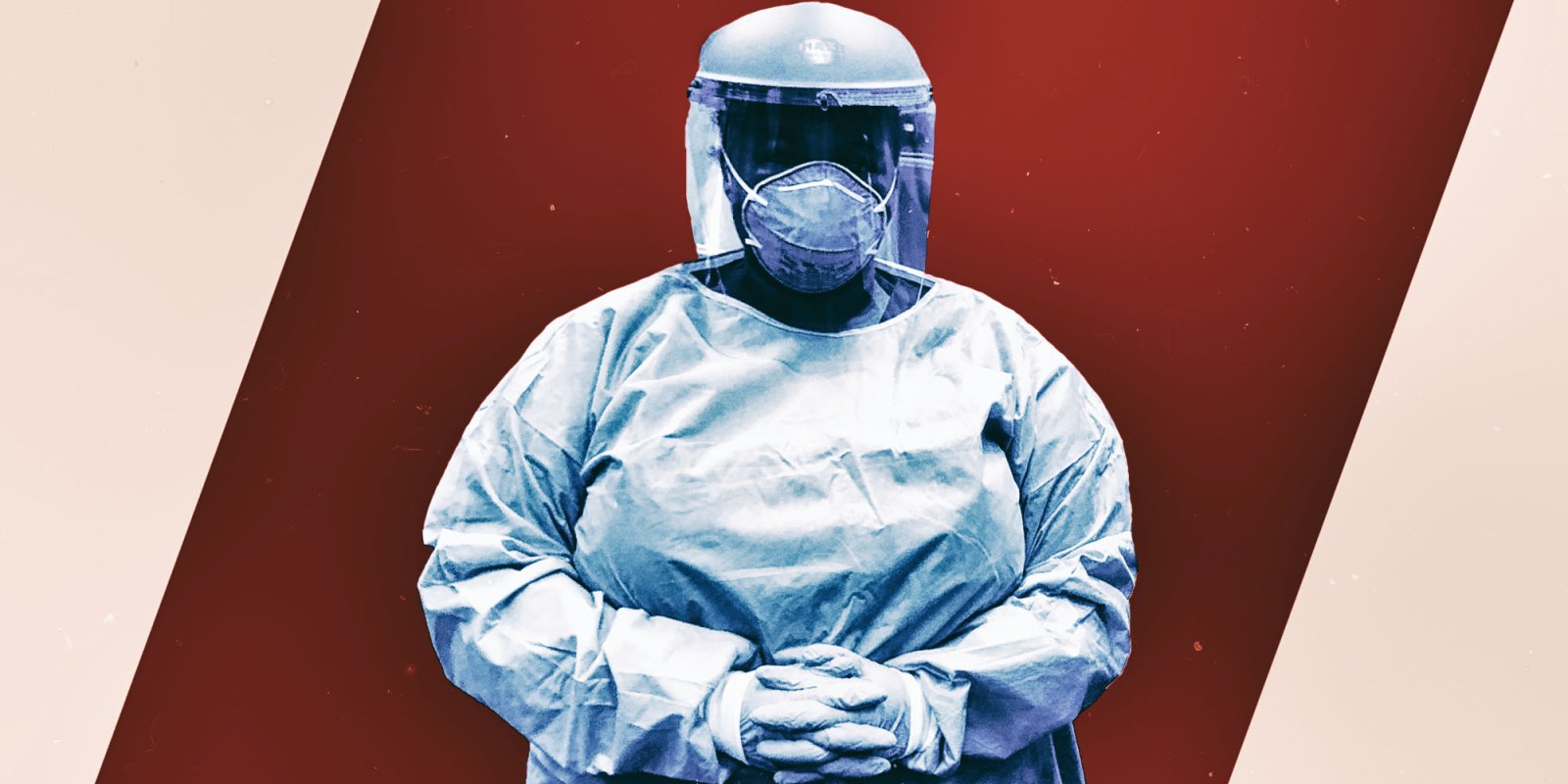 Clinical staff have been raising their concerns over a lack of personal protection equipment in state hospitals in the Eastern Cape. MEC for Health Sindiswa Gomba said they were discussing the possibility of sending all but absolutely essential workers home if the crisis gets worse so that they have enough equipment to protect their clinical staff. (Photo: Chanel Retief)

A doctor had to drive a critically ill patient to hospital himself as several healthcare workers are refusing to work or treat Covid-19 patients in the Eastern Cape. The health department has confirmed that “many are refusing to work”. The problem is made worse by more than 6,000 vacancies that existed in the province before the pandemic began. And R30-billion in legal claims against the department have eaten away at the budget for new appointments.

A doctor at one of the Eastern Cape’s rural hospitals put on personal protective equipment, got into an ambulance and drove a critically ill Covid-19 patient to the Nelson Mandela Academic Hospital in Mthatha. This, while crippling staff shortages continue to ravage the province’s public health facilities.

Eastern Cape Health Department spokesperson Sizwe Kupelo confirmed that there were many state hospitals in the province where employees were refusing to work since the arrival of this novel coronavirus in the country.

“But there are many who are carrying the work. They are my heroes,” said Kupelo.

According to a statement issued by the health department on 1 June, there were 4,111 positive cases of Covid-19 in the province. The Eastern Cape currently has the third-highest number of cases in the country after the Western Cape and Gauteng, and accounts for 12% of the country’s total number of infections.

Kupelo confirmed an incident last week where a doctor at St. Barnabas Hospital in Libode got dressed in full personal protective gear, took an ambulance and drove a critically ill Covid-19 patient 35 kilometres to the Nelson Mandela Academic Hospital in Mthatha.

“Ambulance staff refused to transport the patient,” Kupelo said. “To me he is the real servant of the people.”

Premier Oscar Mabuyane’s cabinet stated in an update on the province’s coronavirus strategy that they appreciated the contribution of healthcare workers in fighting the disease.

“The provincial cabinet resolved that the department of health must attend to the issue of some health professionals who are refusing to treat Covid-19
patients, and to communities refusing Covid-19 patients access to
their local hospitals.

“The South African National Defence Force will be engaged to provide the health assistance it offered to the province to help with the provincial strategy,” the statement read.

Last week, the SANDF had to be called in to restore order in Jansenville after angry community members refused an Aberdeen man, who tested positive for the coronavirus, access to their town’s hospital.

And last month, staff members at Grey Hospital in King William’s Town downed tools in protest after the hospital was designated as a facility dedicated to the treatment of Covid-19 patients. The province’s MEC for health, Sindiswa Gomba, later had to reverse her decision to designate the hospital as such.

A spokesperson for the National Health and Allied Workers Union (Nehawu), Miki Jaceni, said there were many reasons why staff are refusing to work.

“Most relate to incompetent managers but there is also a lack of adequate personal protective equipment, and the decontamination of areas where positive cases were admitted was not being done. There is a refusal to test contacts,” he said. He added that in many facilities, occupational health and safety committees had not been established and staff had not been trained to handle Covid-19 patients.

A number of specialists subsequently left the hospital, including a radiologist, the only gastrointestinal super specialist in the province, and the facility’s only full-time cardiologist. The hospital also lost a paediatric cardiologist and an oncologist.

Spokesperson for nurses’ union Denosa, Khaya Sodidi, said many nurses were waiting for their test results after having been exposed to Covid-19 positive patients. Due to backlogs, these results could take up to three weeks to come back. He said they were being pressured by the health department to return to work, but were staying at home as they did not know if they were contagious. Several nurses in the province have already tested positive for the virus and a number of them have died.

The chairperson of the district health forum in Nelson Mandela Bay, Thembisile Nogampula, said the closure of clinics in the metro – as a result of nurses being placed in isolation – is causing a bottleneck of patients at other facilities.

In a speech delivered to the provincial legislature in May, the Democratic Alliance’s Jane Cowley said the province’s health system “has been standing on the precipice of collapse for several years now”.

“This has overburdened an already stretched workforce and exposes the department to further claims against them. Departmental leadership has been rudderless in this regard. Robbing from Peter to pay Paul has had no positive impact on the situation at all. In the midst of this chaos, we face a global pandemic,” said Cowley

According to minutes from health oversight meetings at the beginning of March, the department was warned that staff shortages would be a major factor in the province’s ability to fight the disease.

The Nelson Mandela health district was also without a manager for more than  a year. One was appointed only after Mkhize raised the issue during an oversight visit.

In April, after an oversight visit, national health minister Zweli Mkhize also said that vacant nursing positions should be filled as soon as possible. The superintendent-general of the department, Thobile Mbengashe, said in an update on the department’s progress that they had budgeted for the appointment of another 1,000 nurses and that the majority of these appointments had been made.

One of the province’s designated centres for Covid-19 patients, Livingstone Hospital, has been without a permanent management team for the past 18 months. Outstanding disciplinary hearings have not been finalised and four managers have in the meantime resigned.

At the time, there was an investigation into allegations that general assistants, clerks, laundry workers and drivers had been fraudulently appointed. This led to the dismissal of 23 employees and disciplinary action against another 24. Around the same time, more than 90 staff members were arrested by the hospital’s security company for theft.

A number of specialists subsequently left the hospital, including a radiologist, the only gastrointestinal super specialist in the province, and the facility’s only full-time cardiologist. The hospital also lost a paediatric cardiologist and an oncologist.

The Nelson Mandela health district was also without a manager for more than  a year. One was appointed only after Mkhize raised the issue during an oversight visit.

In her budget policy speech last week, health MEC Sindiswa Gomba said: “The panic, anxiety and uncertainty with which the Covid-19 pandemic presented itself did not spare the department. Instead, it contributed to expressions through protests in various facilities. We have since managed to ensure the involvement of our social partners through weekly engagements [with labour unions] addressing staffing, PPE provision and consultations.

“[T]he human resource to fight this pandemic necessitated an appointment of 822 nurses contracted for a year, and placement of 20 Cuban doctors throughout the province. To date, the department has received R351,651-million to respond to the [coronavirus outbreak] in the Eastern Cape,” she said. MC