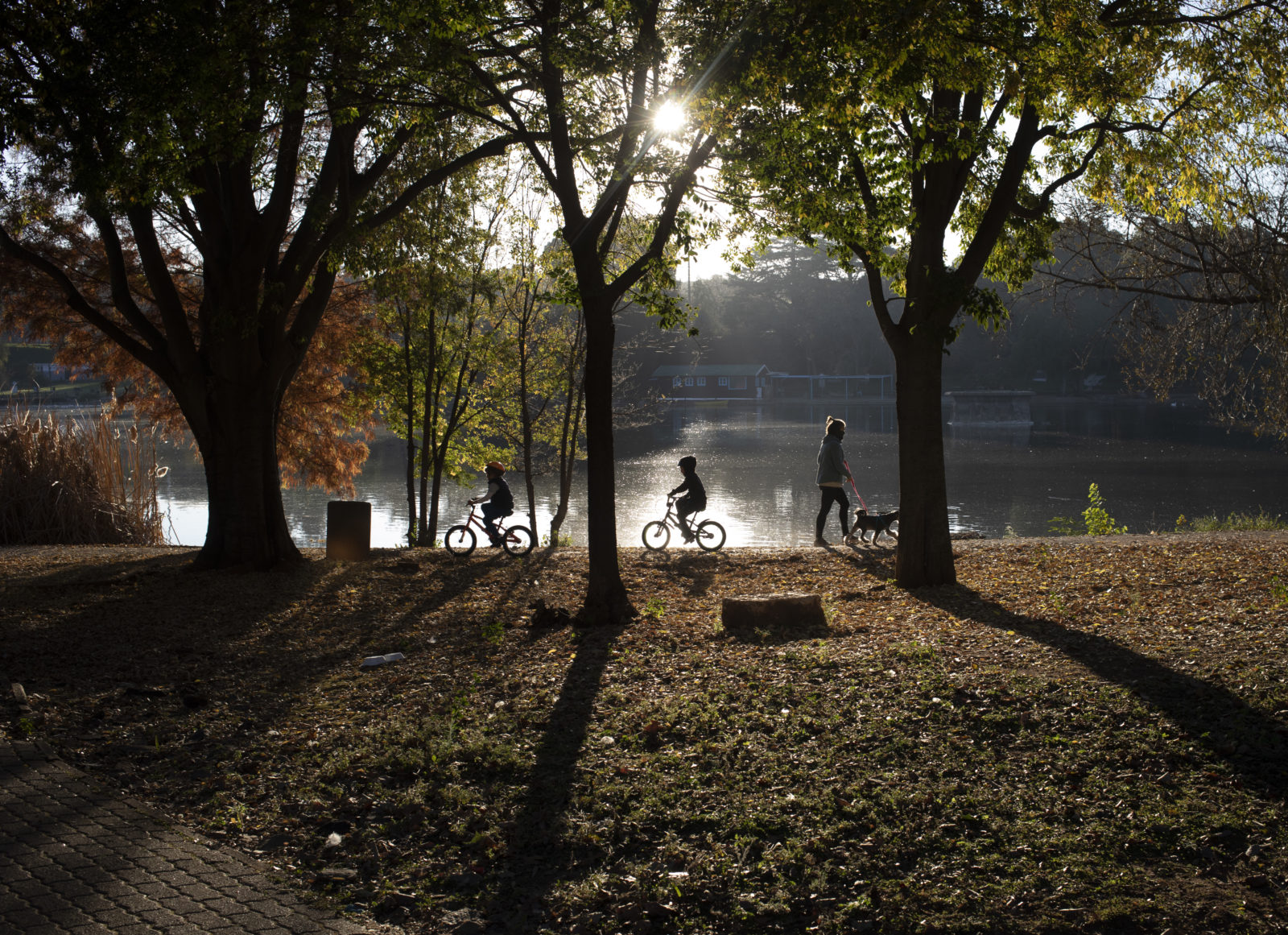 On Friday an old-age home in Cape Town said the majority of its residents who had Covid-19 were recovering. Meanwhile, more projections on the pandemic in South Africa have been publicised. The Helen Suzman Foundation has approached the Constitutional Court to try to get Parliament to play an oversight role in the coronavirus response. Another court matter, relating to the Strandfontein temporary shelter, has been concluded. The repo rate was cut and a forecast for contraction of the economy was adjusted.

Swipe through the gallery below to view the latest Covid-19 numbers available on 22 May at district level. All maps are sourced from provincial health departments, though KwaZulu-Natal, Northern Cape and Free State did not provide updates by the time of publishing: 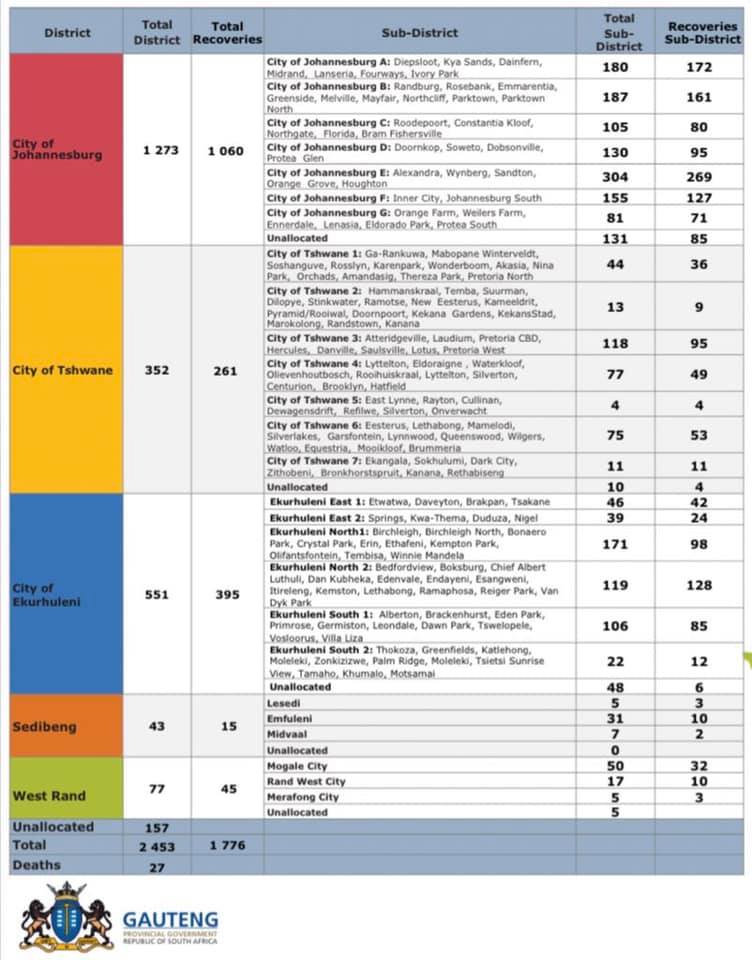 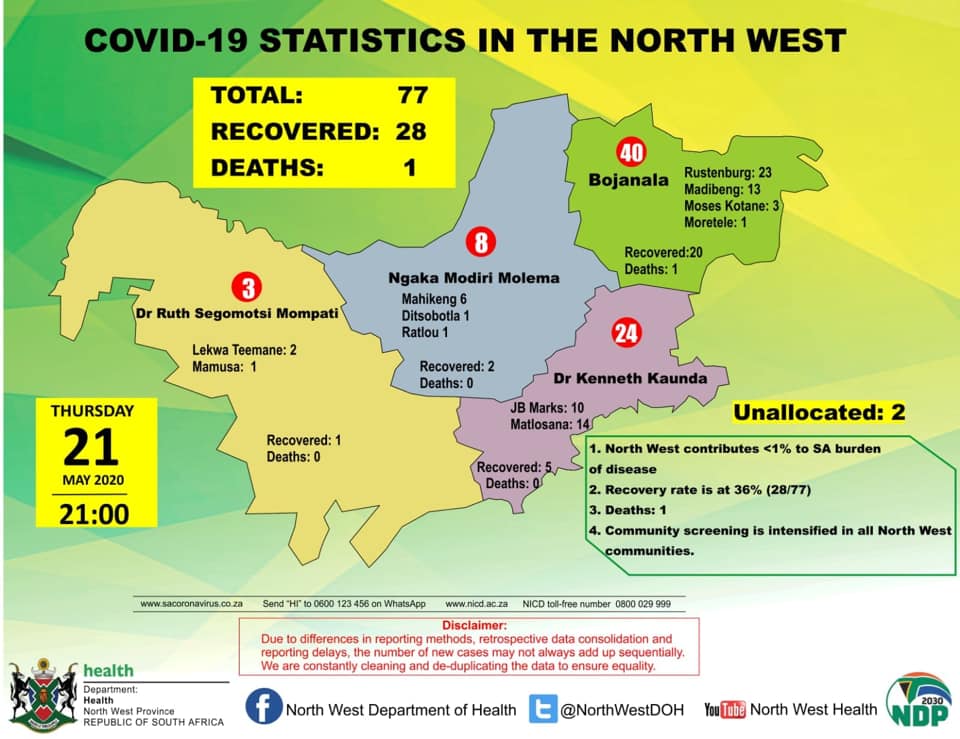 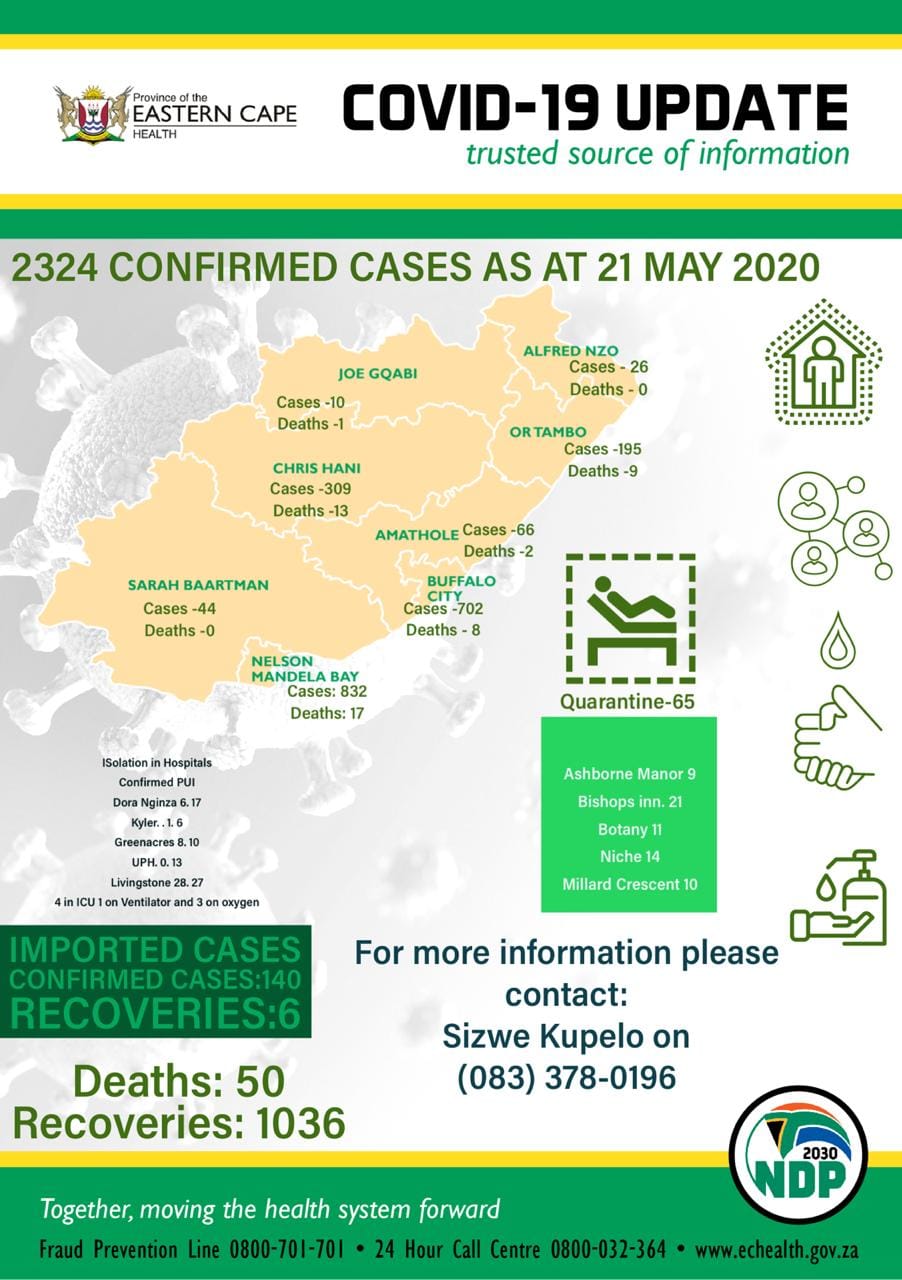 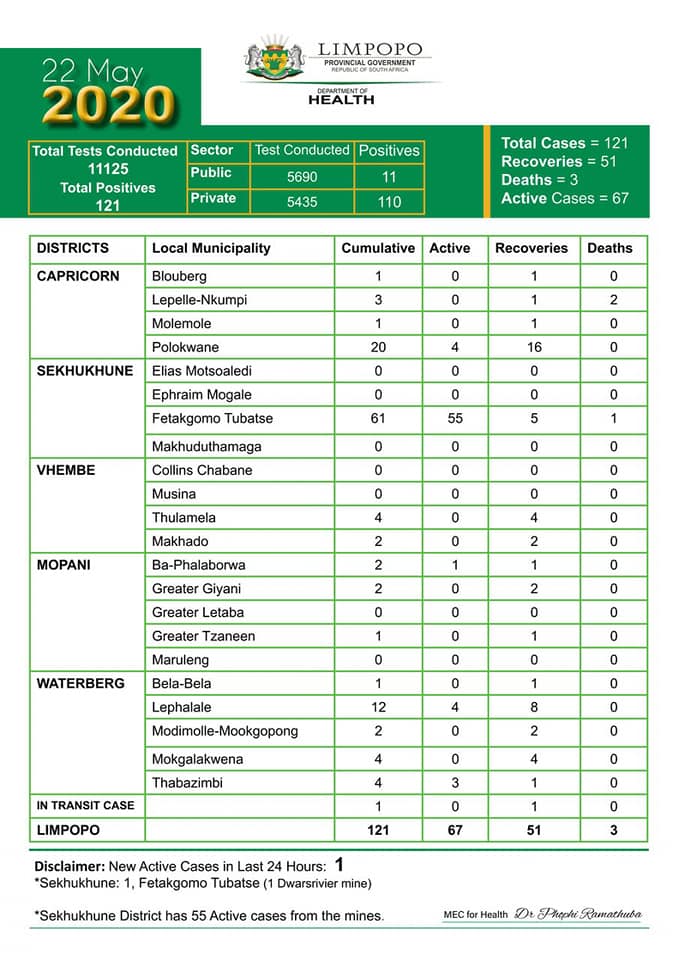 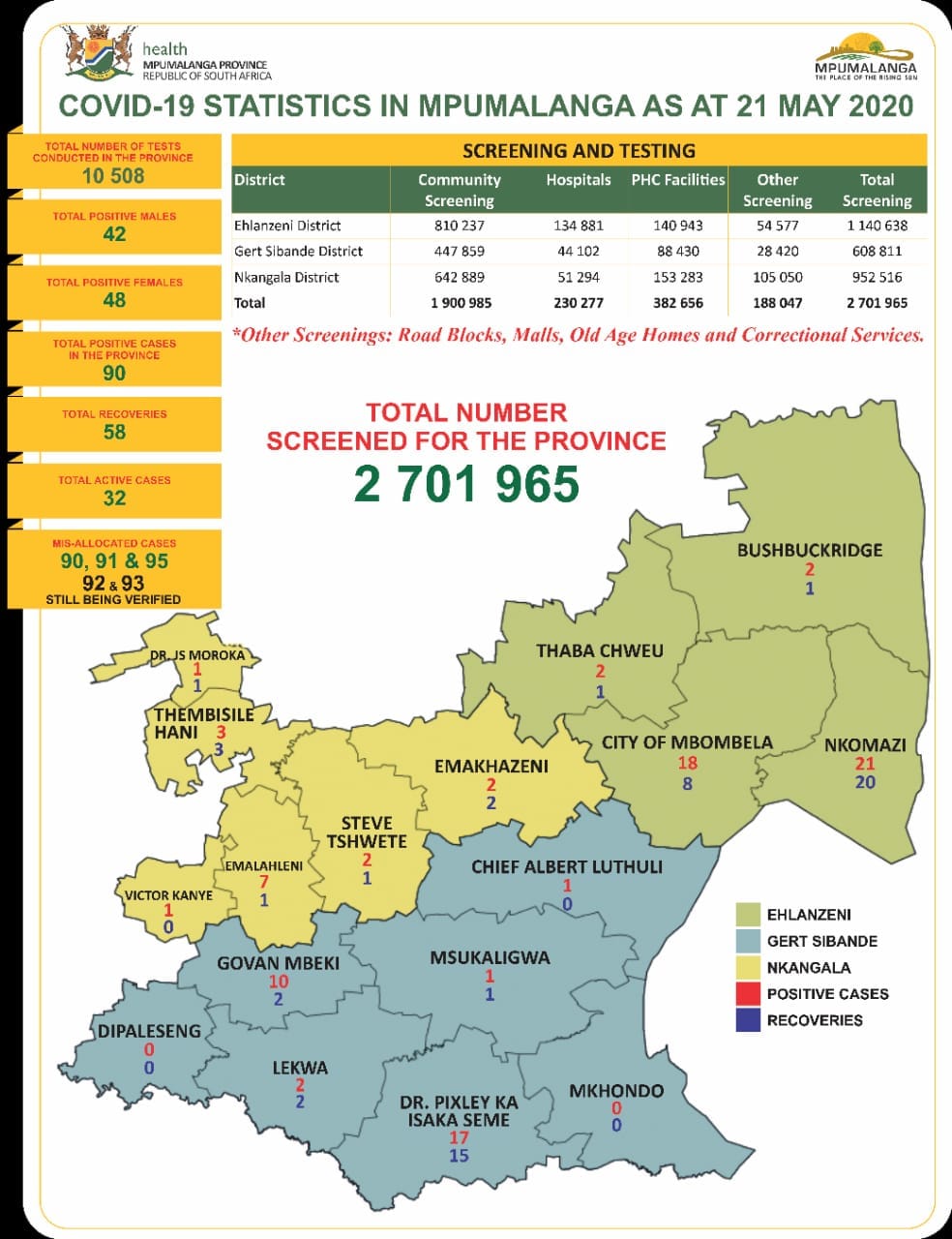 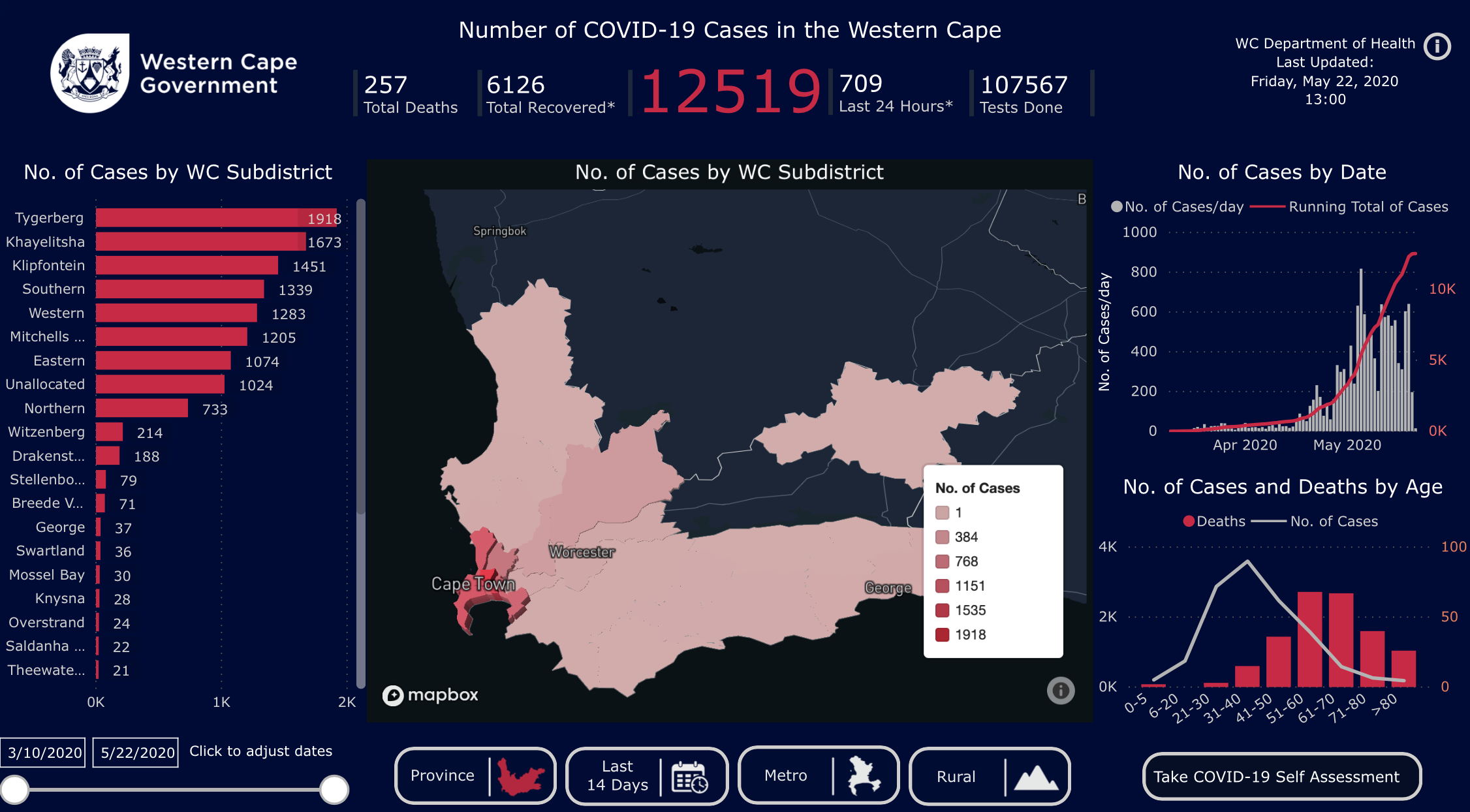 More modelling groups have publicised their projections on Covid-19’s toll on South Africa. On Thursday, several groups presented their findings at a modelling symposium chaired by Minister of Health Zweli Mkhize. Most agreed that there could be 40,000 Covid-19-related deaths by the end of 2020. As Rebecca Davis writes, there was consensus that the country’s health facilities might soon be overburdened.

The Helen Suzman Foundation has approached the Constitutional Court to order that Parliament have regulatory oversight of the state’s response to Covid-19. Marianne Thamm writes that the application is to do with upholding Parliament’s constitutional duty, not policy choices or regulations.

As expected, the South African Reserve Bank cut the repo rate by another 50 basis points, to a historic low of 3.75%. The prime lending rate for consumers is now 7.25%. As Ed Stoddard writes, the Bank also revised its contraction forecast for the economy to 7%.

Though many South Africans are still stranded abroad, just over 5,000 have been repatriated since the start of the lockdown. This has cost South Africa about R10-million, which is far less than the R90-million that had been expected, according to International Relations and Co-operation Minister Naledi Pandor. The cost savings were thanks to a large donation of jet fuel by Sasol to make South African Airways repatriation flights possible. Peter Fabricius reports that some people had to pay for their own tickets or catch a ride on cargo planes.

In Cape Town, the Deeds Office has remained closed despite expectations that it would reopen on Friday. The office suspended its services because of absenteeism over health and safety concerns and had to close again after an official came into contact with someone who had tested positive. As Chanel Retief reports, the office is closed “until further notice”.

Legal action over the Strandfontein temporary shelter continues and Vincent Cruywagen writes that the homeless have been “shunted from pillar to post” by ongoing court litigation. On Thursday, the High Court issued a draft order that the City of Cape Town must find and offer transport and safe accommodation to homeless persons staying at the shelter. They have the choice to accept the offer or not.

Meanwhile, Zimbabweans who were stuck in South Africa due to the lockdown and overstayed their temporary permits have been banned from re-entering the country. This is despite a promise from the Department of Home Affairs that they would not be “declared illegal or prohibited persons”. Carien du Plessis spoke to some of those affected.

An additional 1.4 million people will die from TB by 2025 because of the response to Covid-19, according to international experts. Daniel Steyn reports that the experts emphasise that a united, integrated response is the only way to prevent the prediction becoming a reality.

GroundUp and Spotlight have published their latest Covid-19 Report, which explains the latest quality science on the pandemic. It contains a glossary of unfamiliar terms and explains new studies on who is dying from the virus in the UK, how prevalent the virus is in Spain, the latest setbacks for hydroxychloroquine and the accuracy of PCR tests. It also gives an update on vaccines and what is happening in South Africa.

Nine residents of a Cape Town old-age home have “completely recovered” after 12 residents and 32 staff members tested positive for Covid-19 in early May. Highlands House tested 190 residents and 274 staff within four days after the first infection was detected. As Sandisiwe Shoba reports, the resident doctor attributes the containment to mass testing in a very short period of time – something it is hoped the Department of Social Development will help less-resourced facilities to do. DM