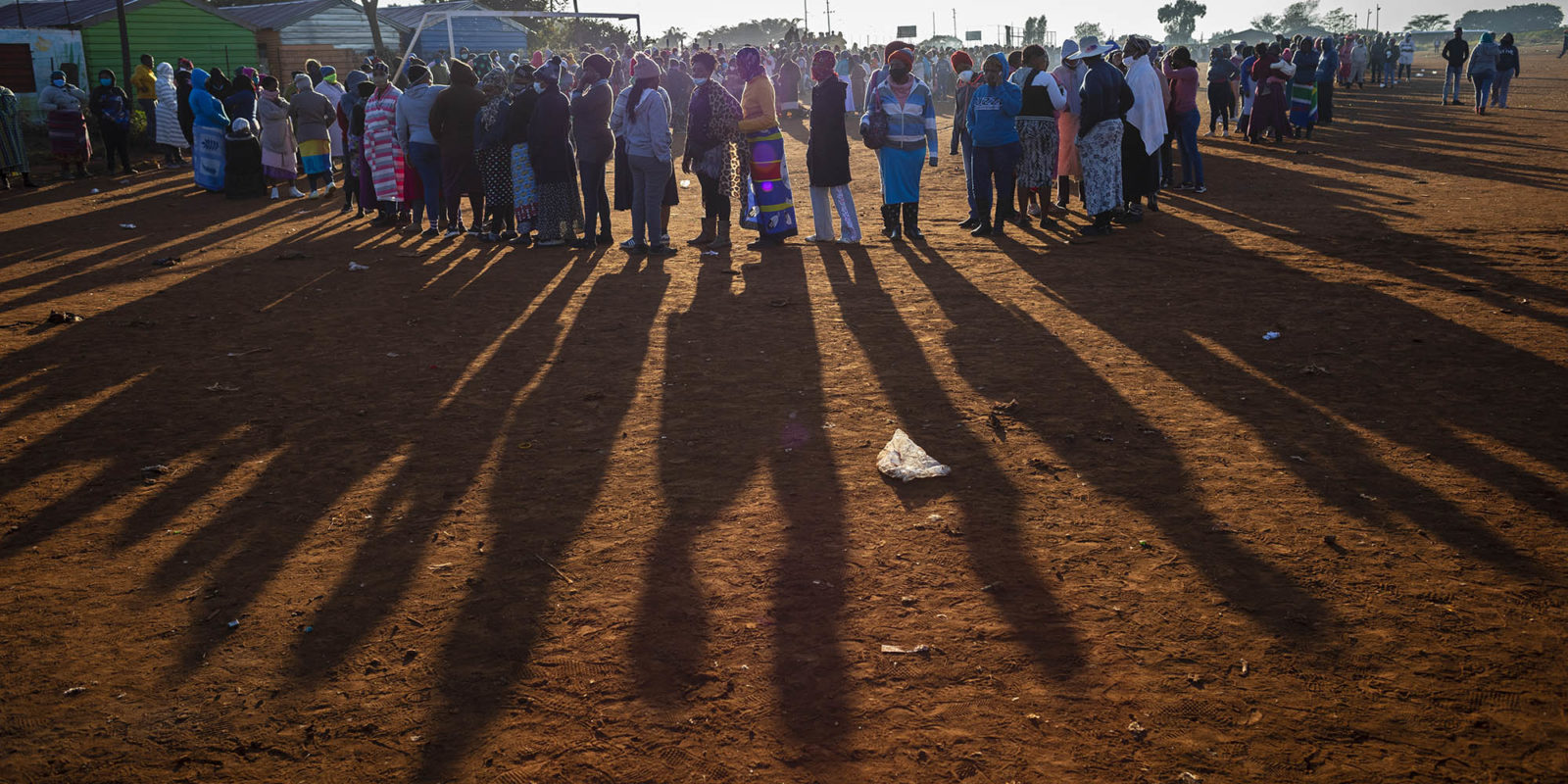 People stand in a queue at sunrise in Johannesburg during the national lockdown to wait for food at a handout by Meals SA. (Photo: EPA-EFE /Kim Ludbrook)

The Helen Suzman Foundation has directly approached the Constitutional Court seeking an urgent order for the president, the Cabinet and the National Assembly to fulfil a constitutional duty to promulgate legislation regulating the state’s response to Covid-19.

While Parliament might hold its first sitting under Covid-19 lockdown regulations on 27 May, the “exceptional circumstances” created by the global coronavirus pandemic did not preclude or frustrate Parliament from performing oversight.

So says Helen Suzman Foundation (HSF) director Francis Antonie in a founding affidavit to the Constitutional Court dated 20 May 2020. The HSF is seeking an order that Parliament had failed to fulfil its obligations under sections 42 (3), 44 (1), 55 (1) and 68 of the Constitution “to consider, initiate and prepare and pass legislation and regulate the state’s response to the threat posed and harm caused by the SARS-CoV-2 and Covid-19”.

Parliament and Cabinet had also, said the HSF, “failed to fulfil their obligations, under section 7 (2) of the Constitution, to respect, protect, promote and fulfil the rights in the Bill of Rights, insofar as their legislative and executive responses to Covid-19 is concerned”.

The NGO has asked the court to direct Cabinet and Parliament “without delay”, to exercise constitutional powers, “for sake of preparing and initiating national legislation that has its purpose the regulation of the state’s response to the threat posed and harm caused by Covid-19”.

It also seeks a declaration that the powers of the minister of cooperative governance and traditional affairs under the Disaster Management Act, 2002,  “will terminate simultaneously with the passage of the legislation” under the relevant sections of the Constitution.

In court papers, the HSF set out how the exercise of power under the Disaster Management Act “has impacted and will, for an indefinite period of time, continue to impact in serious and irremediable ways, on almost every right that every citizen and resident has under the Constitution”.

The response to the threat and harm posed by the Covid-19 pandemic by “similarly constituted parliaments” like the UK and Scotland highlighted “the significance of this failure” with regard to South Africa.

“On 25 March 2020, in the space of days, the United Kingdom’s House of Commons and House of Lords passed a 342-page Coronavirus Act 2020. A week later on 1 April 2020, the Scottish Parliament passed an additional, supplementary Coronavirus Act totalling 70 pages.”

The experiences of other democracies not only laid bare the failure of South Africa’s Parliament to fulfil its constitutional duty to promulgate legislation that regulated the state’s response but also “preempted any suggestion that the exceptional circumstances created by the pandemic precludes or frustrates Parliament doing its duties”.

“If the Parliaments of the UK and Scotland, neither of which has operated in anything like harmonious unity over the past for years, could gather themselves in just days to legislate in the face of this pandemic, there is no reason that our own Parliament cannot now (two months later) do the same,” said Antonie.

“The HSF approaches this court, in other words, not because it advances a substantive view about what the state has done in response to Covid-19, but because it objects to how the state has responded – or, rather, how parts of the state have failed to respond.”

While seeking direct access to the Constitutional Court is only granted in exceptional circumstances “this is clearly such a case” said the HSF.

“The matter concerns the separation of powers, the failure of constitutional duties by two branches of our government, the principles of transparent, accountable and participatory democracy, and the rule of law.”

The HSF’s approach to the court was only concerned with constitutional principles and interpretation which did not require the hearing of oral evidence.

Cabinet had also failed to “exercise its power under section 85 to prepare and initiate legislation, instead contenting itself with the process and the powers created by the Disaster Management Act, a structure that is inadequate, at every level, both procedural and substantive to continue dealing with Covid-19.”

Parliament, said Antonie, had gone into a three-week recess following the declaration of a State of Disaster, “exactly at the time when we needed it most. Despite having returned from long recess in mid-April and starting other business, including its legislative agenda, it has done nothing specific to consider, initiate or prepare national legislation that will regulate, at a general but adequately targeted or concrete level, the state’s response to Covid-19.”

Parliament’s response to requests for oversight had been met with the reply, said Antonie that, “In performing its constitutional obligations during this period, Parliament must not be seen as interfering with the responsibility of the Executive to implement measures for which the National State of Disaster has been declared.”

“This failure of duty is pronounced,” said Antonie.

The HSF quoted Chief Justice Mogoeng Mogoeng in Economic Freedom Fighters and Others v Speaker of the National Assembly and Another in which the Chief Justice described Parliament as “the embodiment of the centuries-old dreams and legitimate aspirations of all our people.

“It is the voice of all South Africans, especially the poor, the voiceless and the least remembered. It is the mouthpiece, the eyes and the service-delivery ensuring machine of the people. No doubt it is an irreplaceable feature of good governance in South Africa.”

Antonie said that in the midst of a national and global crisis “this irreplaceable voice of the people has, for two months, fallen silent. The time has come for it to speak again.”

The Covid-19 crisis had required difficult decisions and urgent responses about which reasonable people might disagree, said Antonie, adding that the HSF “respects the enormous burden that has fallen on the shoulders of the president and his government at this time”.

However, the application was “entirely and only about a narrow, but fundamental, question to do with the structure and location of power under the Constitution.”

“The HSF approaches this court, in other words, not because it advances a substantive view about what the state has done in response to Covid-19, but because it objects to how the state has responded – or, rather, how parts of the state have failed to respond.”

It was critical “that the proper location of that power be restored, not only in the present crisis (to ensure all the benefits that this court has stressed about the importance of deliberation in the legislative process), but from the long-term importance of our constitutional project.”

Parliament, said Antonie, had “abandoned the power vested in it by sections 43, 44 (1), 55 (1) and 68 of the Constitution to the minister, the president and Cabinet, who now more than two months on, continue to act unilaterally under section 27 of the Disaster Management Act to legislate every material aspect of everyone’s social, political and economic life in the Republic.”

The impact had not only been on the rights of “the entire populace” but had also been “to the detriment of fundamental constitutional principles held to be sacrosanct by this Court, and by which our rights are ordinarily best advanced and protected”.

These were the principles of multi-party, representative and participatory democracy, responsiveness, accountability and openness.

This required both bodies to “actively to take steps to reach this state.” What the HSF feared was “a misunderstanding of the Disaster Act, as against the requirements of the Constitution. It is evident that Parliament and the National Executive believe that the Minister can exercise her power for as long as Covid-19 presents a threat.”

“This could be for months or even years, meaning that the state’s response to Covid-19 will remain exclusively within the subjective purview of the executive branch of government.”

Power needed to be returned to Parliament and the executive, said Antonie.

There would be no attack on the policy choices or value judgments that were embodied in regulations made and directions issued to date.

“The relief the HSF seeks does not concern the validity of any positive law made or conduct taken to date.” DM