Amid Covid-19 hard lockdown, SAPS future policing plans talk of ‘stamping the authority of the state’ 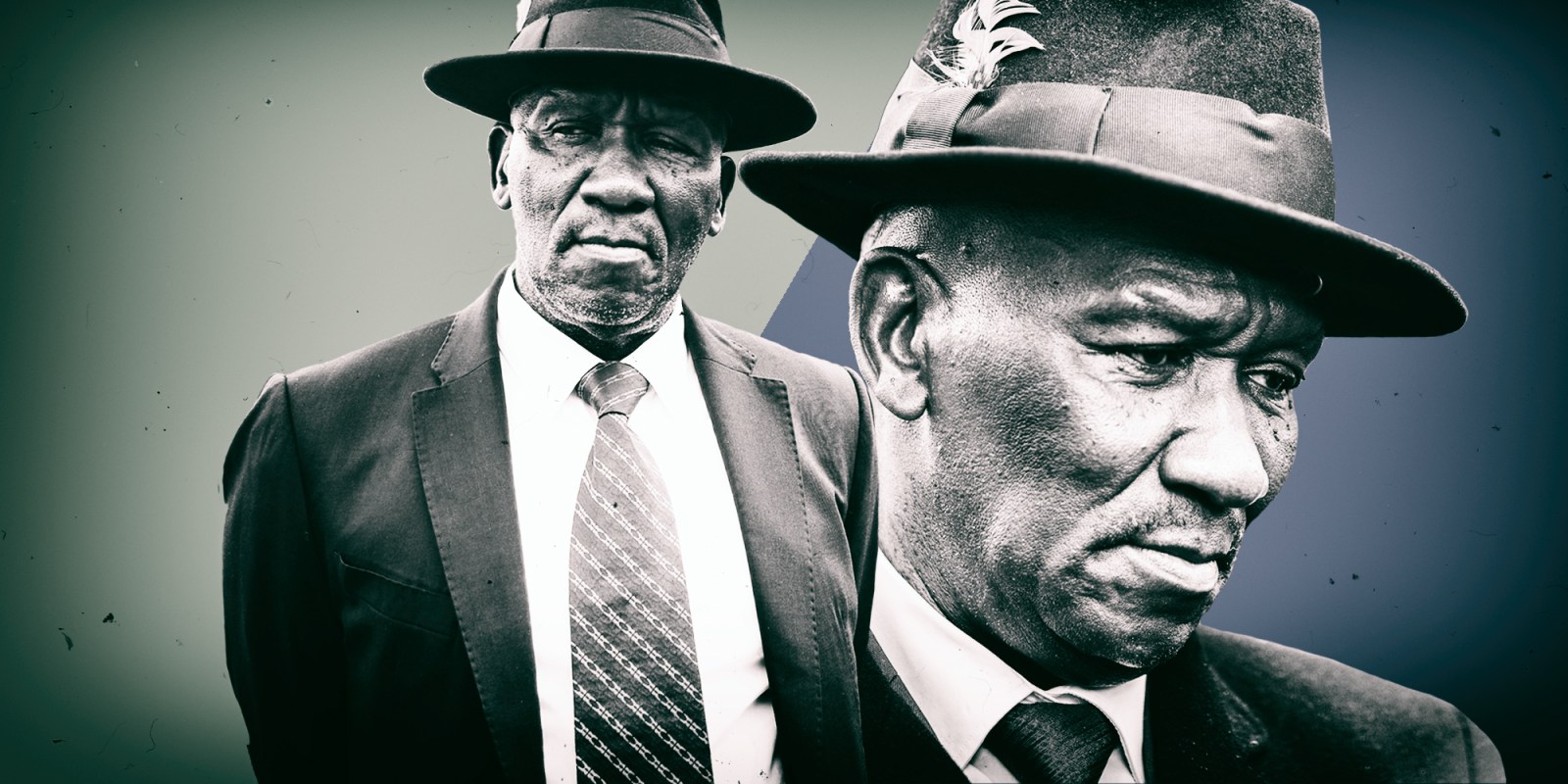 The phrase ‘the stamping (asserting) of the authority of the state’ ran through the performance plans of the SAPS – except for crime intelligence and detectives – as Police Minister Bheki Cele batted for his men and women in blue on Friday.

“What I can say. Indeed there are members that sometimes get over-excited, but not too many. They do their job under heavy provocation,” Police Minister Bheki Cele told lawmakers ahead of a briefing by police watchdog, the Independent Police Investigative Directorate (Ipid) on its caseload during the hard Covid-19 hard lockdown.

“Community members themselves are provocative to the police. We don’t have the structures that check the community when they are provocative…  That thing will have to be balanced.”

Cele, who had earlier pointed out how “heavily overseen” the SAPS was, in his usual folksy mannerism explained such provocation to parliamentarians.

One example the minister raised was how police have had to “handle” a member of the community into a van after he had refused to take himself into the van, but “then the community member says police are breaking the law for not keeping distance”.

Another example was people not saying what they were arrested for, claiming it was for lockdown related police action when it wasn’t. Like during raids on spaza shops, or small general dealers.

“There are many things with these regulations that may not be understood by the shop owners,” said Cele. “I don’t know why (but) you find a serious breaking of law when it comes to the selling of meat. You go there you find rotten meat, meat that has been long it doesn’t tell you if it’s beef or donkey…”

And Cele told Parliament’s two police committees no blasphemy by SAPS officers actually had happened in late April when police arrested several Muslims who had in contravention of the ban on gatherings held a prayer meeting. The minister had apologised “for the blasphemous remarks during the arrest, a matter that is currently under an urgent investigation by the SAPS to establish the identity of the person behind such sacrilege” in an official statement on 26 April.

On Friday Parliament heard how the police officer in question had not referred to Islam’s prophet, but to “one of the three Mohammeds” arrested for organising the unlawful gathering. “The question of blasphemy falls off,” said Cele.

It’s not unusual that the SAPS’s own internal probes lead to such exoneration. The same happened regarding the August 2012 Marikana massacre of 34 miners: in March 2017 Parliament’s police committee was told 87 police officials were cleared in internal proceedings.

Ipid to date has to complete its investigations, stifled due to lack of money as had been recounted on several occasions before the parliamentary police committee in pleas for finances.

The police watchdog has been without a permanent head for over a year since early 2019 when then boss Robert McBride’s contract expired. And on Friday it was clear acting appointments run across Ipid, from the head down.

MPs were not impressed with what acting Ipid boss Patrick Setshedi presented, describing it as off-point and “confusing”. Curiously, Cele was given the opportunity to comment on the Ipid numbers, which he did to highlight inconsistencies.

But some core numbers did emerge regarding the Ipid investigations into Covid-19 lockdown police brutality and killings. Of a total of 376 Ipid matters, 10 are related to deaths due to police action, 79 related to the discharge of a firearm and 280 of assault.

It is against this backdrop that the SAPS annual performance talks of “the law upheld and enforced, to support the stamping (asserting) of the authority of the state” as the desired outcome. And that’s in all programmes except crime intelligence and detectives.

Cele told lawmakers on Friday about his concerns about language with regards to Ipid investigations; he complained that Ipid, when investigating police, talked of murder and assault while anyone else allegedly committed a crime.

Yet no such linguistic sensitivities apply to the SAPS and its annual performance plan language of “internal stability” and “… the stamping (asserting) of the authority of the state”.

Coincidentally, identified as a key risk to this stamping of the state’s authority the annual performance plan includes power outages and porous borders, but also  “moral fibre degeneration” and “heightened community protests, with regard to services rendered at local, provincial and national government levels”.

That “stamping (asserting) of the authority of the state” includes a range of annual performance outcomes in the 2020/21 financial – from increased feelings of safety in communities, achieving “balance between trade and security at ports of entry”, stopping illegal mining to protecting valuable cargo and VIPs.

Targets in “the law upheld and enforced, to support the stamping (asserting) of the authority of the state: Increased feelings of safety in communities” section includes the intended closure of 90% of illegal liquor outlets but also the recovery of stolen, lost and/or illegal firearms.

It’s those indicators in the annual performance plans which bear closer scrutiny.

The target to recover 3,751 stolen, lost and/or illegal firearms is just a little more than the achieved 3,535 such firearms recoveries in 2019. But that’s just about half of the 7,141 recoveries achieved in 2018. Effectively, the SAPS remains 50% down on what it has done just three years ago.

Nor does the annual performance plan make it clear how, or why, the police would be able to meet its target of 7.5% reduction in the 2020/21 financial year. For the past three years the SAPS has achieved at best a confirmed reduction of 2.6% in the 2018/19 financial year – it was up from 1.1% the year before – before slumping to 0.8% estimated performance for the 2019/20 financial year.

Unless the police leadership is hoping the hard Covid-19 lockdown will assist. Cele highlighted the drop in serious crime in an official statement in early April. And then perhaps throw into the mix what anecdotal accounts indicate is a heightened trend of turning people away from opening cases, citing the lockdown.

Meanwhile, the indicators for detective services show moderate increases as stamping the authority of the state makes way for “thorough and responsive investigation of crime”. Detectives are supposed to detect some 0.25% more contact crime – 55.47% in the 2020/21 financial year, up from the 55.22% detection rate in 2019/20.

On Friday Cele’s interaction was speckled with folksiness to focus away from the few bad cases, or “rogue cops”. Ipid had not helped itself in its presentation of Covid-19 hard lockdown related probes of police killings and brutality.

Instead, Cele moved to focus attention on how the SAPS was affected by Covid-19 even if, as the minister insisted, “up to this point we are fine with the PPEs (personal protective equipment). We keep on adding because most of them (PPEs), they are disposable. At all stations we are fine…”

Yet within a week, 150 more police officials tested positive for Covid-19. Cele told lawmakers that as of Friday there were 253 positive Covid-19 SAPS members, 178 in the Western Cape. A week earlier on 29 April, police management told Parliament that of 2,917 tested, 103 came back with positive results. One police official had died as three were hospitalised.

And so regardless of the spin, folksiness and kragdadig assertion of powers like police station commanders issuing permits to allow people to move homes until 7 June –  not all’s well after all. DM