Marikana Massacre: Police absolve 87 of their own 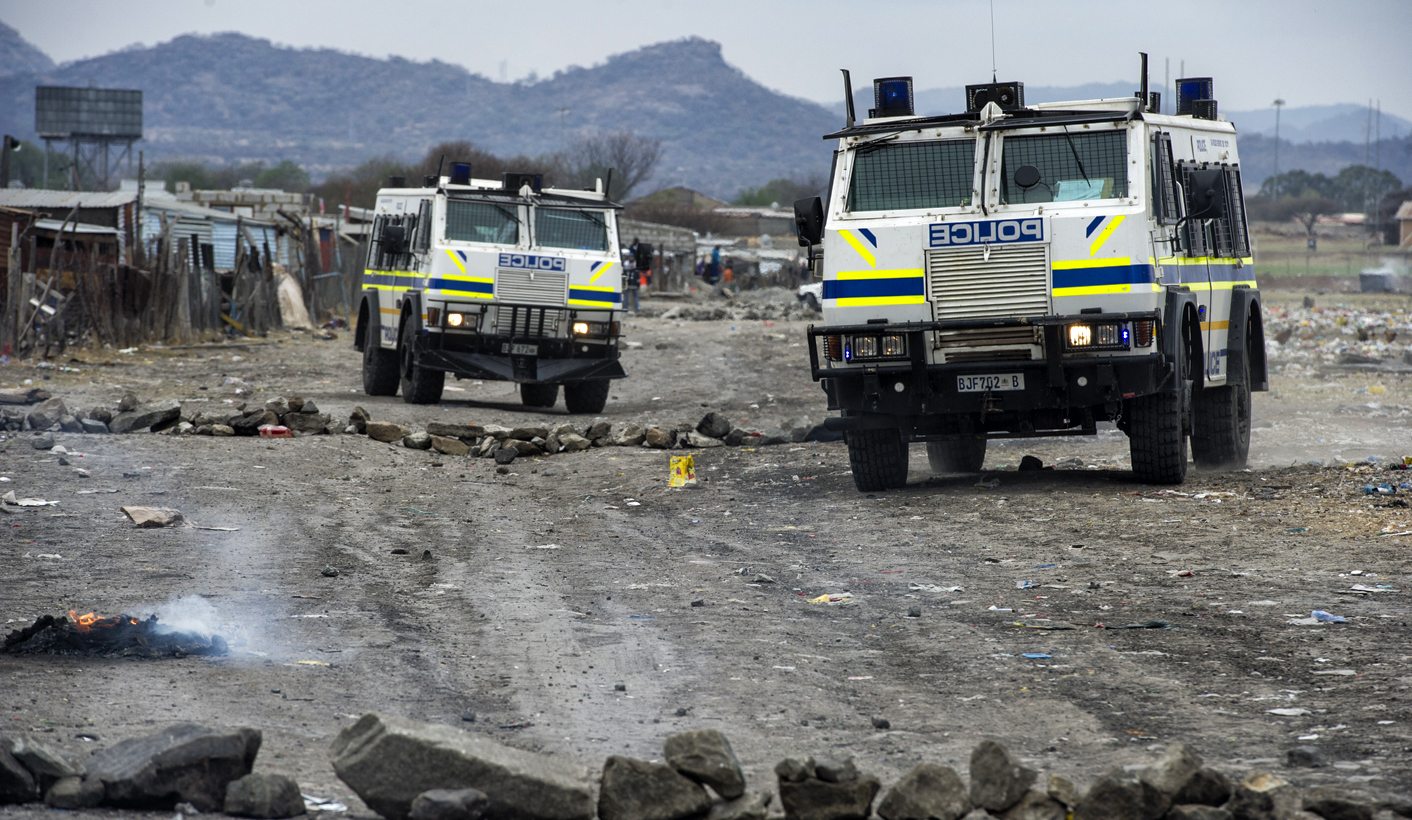 Police investigated, and cleared, 87 of their own members in relation to the August 2012 police killings of 34 Marikana miners. “They were cleared internally,” SAPS deputy national commissioner for human resource management, Lieutenant-General Bonang Mgwenya, told Parliament’s police committee on Wednesday. Like the police, its statutory watchdog, the Independent Police Investigation Directorate (Ipid), was there to update MPs on the implementation of Marikana Commission of Inquiry recommendations. Ipid boss Robert McBride appeared gobsmacked. “It’s strange they were all cleared, as so many people died. In future, please involve Ipid. Otherwise it’s the police investigating itself,” he told MPs. By MARIANNE MERTEN.

There were no details proffered to MPs, who also did not ask, as to what the internal SAPS investigations had entailed, what charges were investigated or even when this internal process took place. What did emerge was that the SAPS had not pursued internal investigations against senior police officers regarding the Marikana miners’ killings. For this, Mgwenya said, the police were awaiting Ipid’s report.

The police watchdog is investigating 184 police officials over the Marikana killings, and has taken all but 64 warning statements. The due date for dockets to be finalised and submitted to the National Prosecuting Authority (NPA) is April 24, 2017.

There are another 145 cases of assault, and seven of torture, which have been completed and referred to the NPA in North West province, which were returned with queries.

Ipid investigations also include one case of defeating the ends of justice against police for failing to report the death of one miner in a Canter police vehicle at a detention centre. The report on this death in police custody has been submitted to the NPA on March 7, 2017 for a decision on prosecution.

Ipid’s investigations into Major-General Ganasen Naidoo diverting emergency medical personnel, and firing his weapon, have been submitted to the NPA for further directives. Ditto the Ipid investigation into Brigadier Ledile Malahlela for the loss of a memory stick that contained the recording of the National Management Forum meeting at which police decided to “go tactical”, as the Marikana commission put it, leading to the killings the next day.

March 28, 2017 is Ipid’s deadline to submit its docket into the three deaths of August 13, 2012, alongside the attempted murder of six others. This case relates to the deaths of 12 people, including two police officers and two Lonmin guards, in the days ahead of the Marikana police killings of 34 miners on August 16, 2012.

On Wednesday it emerged that the families of the two SAPS members killed in the days ahead of the Marikana police killings have each received R250,000 in line with police policies for members killed on duty, while their children are supported by the police’s education fund.

The Ipid presentation by investigations head Matthews Sesoko had followed that of the police’s where the emphasis was on “efficient” and “expeditious” and “successful” implementation of the Marikana Commission of Inquiry recommendations.

“Critical milestones” were achieved, according to acting deputy director-general Nashee Sewpersadh from the minister’s programme management office. It wasn’t that nothing was done – housing development and North West Premier Supra Mahumapelo has established a reconciliation committee “to address the needs of all the people” – but communication on achievements could be improved. That sentiment was supported by Police Minister Nkosinathi Nhleko.

Expeditiousness and a “conciliatory approach”, Sewpersadh said, also governed government’s approach to the litigation for death, injury, assault, loss of support and unlawful arrests arising from the Marikana tragedy.

The police presentation to MPs said that after the president announced that government was “seeking expedited resolution of legitimate claims” in December 2015, within one month government responded and met with attorneys in January 2016. Within 10 days, the state conceded the merits of “legitimate claims” and instructed lawyers to settle loss of support and personal injury claims, but “exclude those claims that are under criminal investigation and can face possible prosecution”.

The families instituted litigation years back. Keamogetswe Thobakgale, attorney at the Socio-Economic Rights Institute (SERI), representing most of the affected miners’ families, said discussions were on under way on the loss of support claims. “We don’t have offers for everyone,” he said. “For the families it is frustrating.”

But it isn’t only about money. One central demand is for an apology from the state. “We still haven’t heard anything yet,” said Thobakgale. “From the principle of ubuntu it’s a broad request, but it is necessary.”

There has been no cathartic pointing to an individual or group of people as responsible for the Marikana killings, frequently likened to democratic South Africa’s equivalent to the 1960 Sharpeville massacre. Instead, the commission of inquiry’s final report recommended a series of actions to be taken by various authorities.

Amid the commission’s criticism of Lonmin and the two trade unions involved in the labour dispute, politicians were largely exonerated. The commission’s verdict on then police minister Nathi Mthethwa was not decisive, but did not implicate him and recommended no actions.

However, the police found itself at the centre of recommendations. One recommendation was an inquiry into Phiyega’s fitness to hold office. That was up to President Jacob Zuma, who in terms of the law appoints, suspends and dismisses the SAPS national commissioner. It was done, and the board of inquiry recommended her dismissal. But the matter remains stalled as Phiyega this year took the commission’s report on review to court.

Other recommendations revolved around steps to be taken by the police ministry to ensure a panel of experts is appointed to advise on improved public order policing and training, a transformation task team to ensure police are ready to conduct effective policing, proper equipment and communication, and that police must be able to provide medical care.

All this is under way to some extent: the panel of experts has submitted a report to Nhleko, who will table it for approval in Cabinet, the transformation task team is established, R5 automatic rifles are no longer used in crowd control, and over 300 police have been trained in medical first aid, now also part of the new recruits training programme. R242-million has been allocated for new equipment such as water cannon and vehicles for the public order police.

The miners’ families wait. And saying sorry seems to be the hardest thing. DM