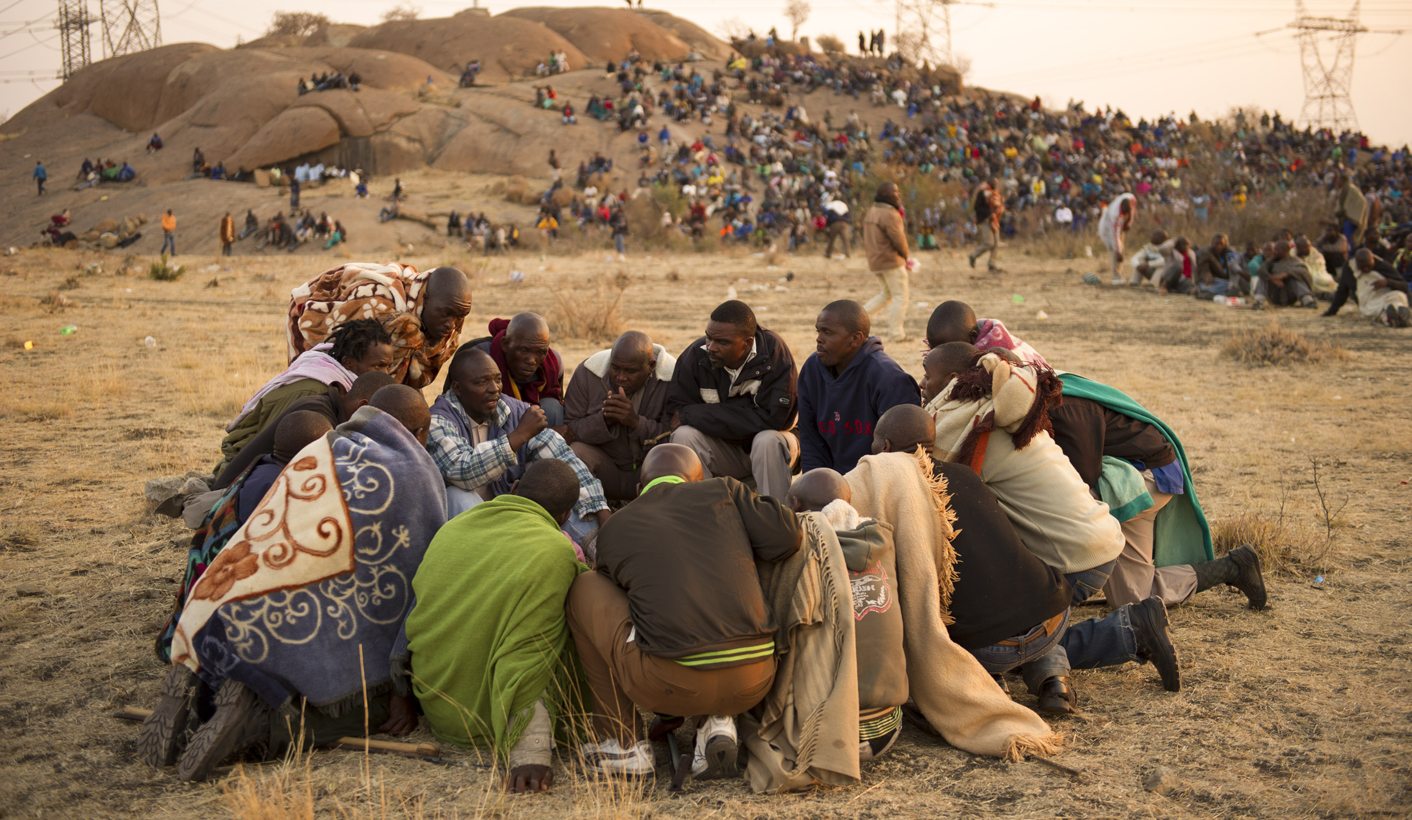 To unravel the weave of police lies and deceit in the aftermath of the Marikana Massacre, a loose end has to be found. That loose end was finally discovered, courtesy of a mysterious informer that the evidence leaders dubbed ‘Deep Throat’. GREG MARINOVICH reports on what is perhaps the most important indicator of premeditation ahead of the killing of 34 mineworkers by police, and the wounding of 78 others in 2012.

The Marikana Commission of Inquiry was floundering. The wall of police silence, punctuated by the spouting of bullshit, was confounding the progress of the inquiry. The National Police Commissioner Lieutenant General Riah Phiyega’s obdurate performance in the witness chair was frustrating, enraging many who hoped she should be there to help find the truth, as opposed to defending the indefensible. Everyone involved in the Commission was convinced the police had concocted a false story and had hidden any evidence that countered their tale of what happened. But for months they could not find a definite indicator of the deceit.

Then the evidence leaders got a message from an anonymous source. They were advised to look for the minutes of the National Management Forum (NMF) meeting from the 15 August. This was the night before the massacre, and the source specifically directed them to Item 7.

The reason that the 15 August meeting is so important because it was a normal gathering of the nation’s police commissioners and deputy commissioners as well as the heads of all the various departments, pen pushers through to operational hard jobs. That ordinary meeting, held monthly, dealt with mostly administrative police matters. At the end of this NMF, Phiyega asked the financial and administrative people to leave, as well as Major Gugu Lethoko, who was tasked with taking minutes on what was said. The National Commissioner wished to discuss Marikana and she did not want a record of what was discussed to ever emerge outside of that circle of blue.

The original police submission was that as the situation on the 16th had ‘escalated’, and they had been forced to move in to disarm the striking miners. The police said the decision was taken midday on the 16th. The militant and muti-empowered miners had ‘disrupted’ the non-lethal policing plan and forced the cops to use deadly weapons, moving to the ‘tactical option’.

But this is not the truth of the matter.

What we now know is that once Phiyega dismissed all the non-essential headquarters cops from the NMF, the matter turned to Marikana and what they would do, and how to do it. It was at that extraordinary meeting that the decision was taken to go in and “disperse, disarm and arrest” the miners. It was also then that the “tactical options” were approved. There was nothing that happened on Thursday the 16th that justified the police’s deadly actions.

While Phiyega had thought to dismiss the secretary taking minutes of the meeting, she failed think of stopping the audio recording that is standard for all NMF meetings. In a kind of messy arrangement, an outside company does the recording and then one of the SAPS technical staff copies it on to a memory stick before ensuring the original is deleted. Phiyega, as a neophyte, might or might not have been aware of the practice. The meeting, to her mind, was off the record and fell under the Protection of Information Act, which rendered it secret.

It has not been uncovered who exactly said what at that extraordinary meeting. But we do know what the outcome was. By 10 o’clock that night, the North West province’s commissioner Lieutenant General Mirriam Zukiswa Mbombo telephoned her deputies and the operational commanders, the Major Generals Mpembe, Naidoo and Annandale, and told them that the they were to disarm the strikers tomorrow, come what may. It was D-Day.

It is as yet unclear exactly what the top policemen and women in the SAPS thought would happen when hundreds of men armed with military assault rifles went ‘tactical’ on civilians, even civilians armed with spears and pangas. But in the fallout of the killing dozens of miners and the wounding of scores more, the police tried to impose a false narrative on the deaths of 34 miners. They wanted the miners to be seen as the aggressors, and the police as acting in self-defence.

They also began an in-depth cover up. One of the key pieces of evidence that the police had to suppress was the minutes of that meeting the night before. Brigadier Ledile Malahlela, the head of executive secretariat risk and information management, took the memory stick home with her. She should immediately thereafter have brought it to the office and given it to Major Lethoko for transcribing.

It was only on Friday the 17th, two days after the meeting, while Lethoko was writing up her minutes that she realised she needed the audio to fill in some of the omissions in her minute-taking. She emailed her superior, Malahlela, asking for the memory stick. Malahlela only responded midday on Sunday, saying that her secretary would bring it to the office on Monday. The stick did not show up on Monday and Lethoko asked the secretary to go collect it from the Brigadier’s home. Eventually the audio recordings were given to Lethoko on Tuesday afternoon. When she listened to it, she found that the recording of the extraordinary session was absent. It is clear that Malahlela had brazenly disregarded the strict protocols pertaining to ‘top secret’ information. It is also obvious that, during the time the stick was apparently in Malahlela’s home, someone had deleted the part of the meeting where Marikana was discussed, the extraordinary session. A decision had been made to delete this critical discussion from history.

The memory sticks of the recording of the National Management Forums, designated ‘top secret, were meant to be kept in a locked cabinet in Lethoko’s office. But this particular one was sent back to Malahlela, with the unconvincing explanation by Lethoko that she thought the physical stick was the property of her boss, or “maybe it had other files” on it. By the time Deep Throat had tipped the Commission’s evidence leaders off to extraordinary session after the NMF, Malahlela had somehow lost the memory stick.

In the meantime, Lethoko sent her minutes on to Malahlela, who sent them on to Phiyega. By now, police commissioner was the centre of the storm over Marikana and she decided to cover her tracks. Phiyega wrote her own minutes of what happened in the extraordinary meeting, making sure that it was everyone’s decision to go in and disarm the miners on the 16th. Phiyega then instructed Malahlela to include this fictitious recounting as Item 7.

When these draft minutes got circulated at the next NMF for approval, in October of 2012, not a single one of the people who were asked to leave at the end of the ordinary meeting were willing to sign it. Item 7 was removed from the minutes of the NMF. The smaller group from the extraordinary meeting was meant to reconvene to confirm the last portion. They never did.

When the Commission tried to find out more about what happened in the meeting, they were blocked at every turn. Malahlela was booked off sick with stress for months, and did not appear to testify. Phiyega did her usual bureaucratic stonewalling. The Commission sent out a questionnaire to those high-ranking officers who were present. The results were disappointing, to put it mildly. The senior evidence leader, Advocate Geoff Budlender, called the responses a disgrace. “Chair, if one analyses these statements one is left, to be absolutely blunt, with a feeling of absolute despair. These are the most senior people in the South African Police Service. They’re asked some very important questions by a Commission which is investigating, as Mr Chaskalson put it, the greatest catastrophe since we achieved democracy, and the answers are evasive and they are non-responsive.”

But there is a chink in their armour. A couple of weeks ago, Deep Throat surfaced again, sending perhaps his or her last message to the evidence leaders of the now disbanded Commission. They were told that they had done good work, but that they needed to push harder on Malahlela. She must be charged and then a lot would unravel.

Malahlela has, on the face of it, contravened section 4(1)(b)(dd) of the Protection of Information Act 1982 for neglecting or failing to take proper care of the memory stick containing top secret information. Charge her and let us start pulling on that loose end until the conspiracy to murder the miners is unravelled. DM