Surviving the Coronavirus shutdown: Seven days of staying at home, 14 days to go 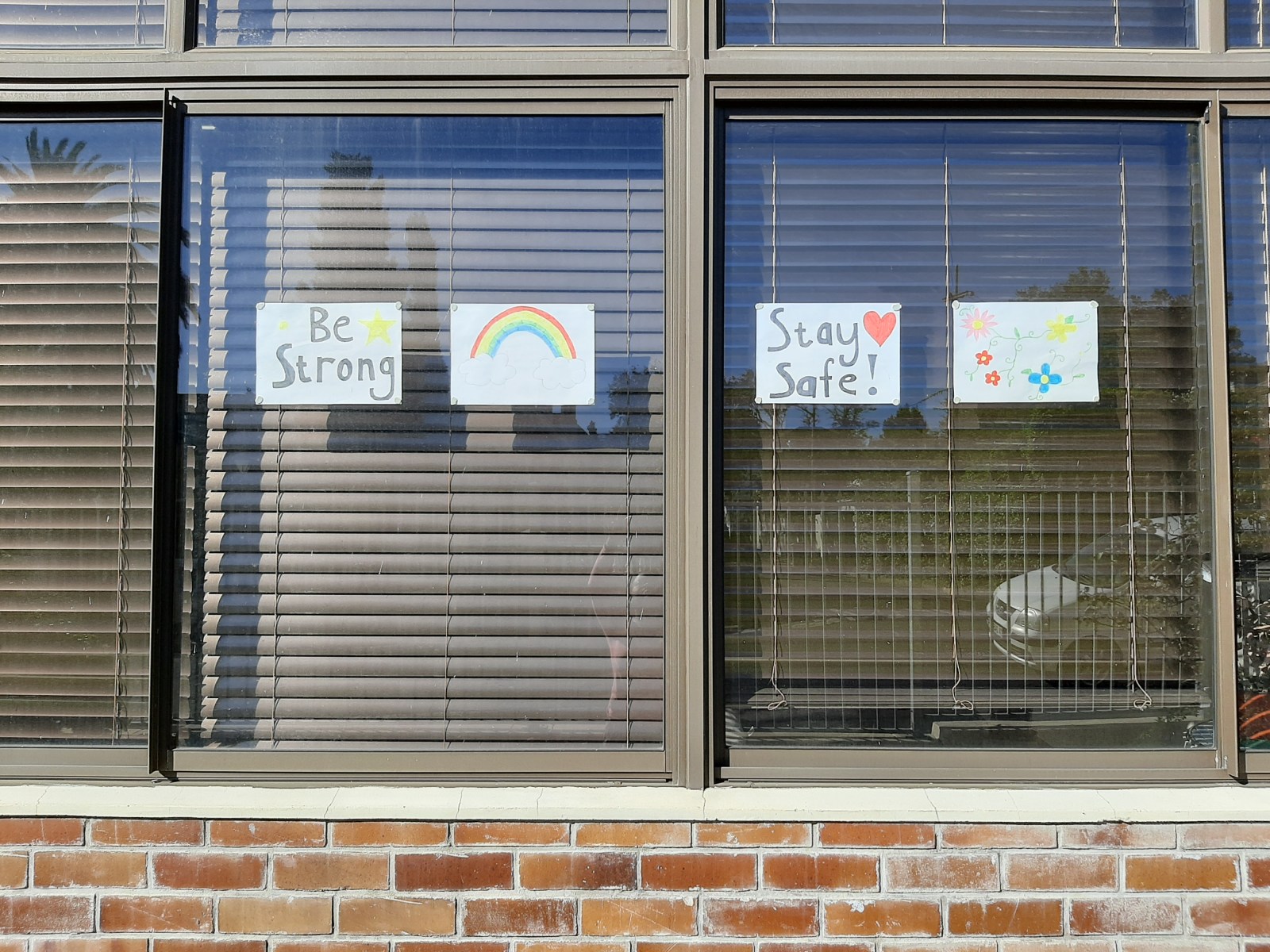 A few houses in the area have put up rainbow pictures and encouraging messages to ‘be strong’ and ‘stay safe’ during the lockdown. 2 April 2020. (Photo: Sandisiwe Shoba)

South Africa went into lockdown on Friday, 27 March, in a countrywide bid to block the spread of Covid-19. These reflections form part of a series by Young Maverick writers who are monitoring the 21-day stay-at-home policy from various neighbourhoods.

Adjusting to the new normal

Ekurhuleni, Gauteng: Thursday 2 April marks seven days since indoor life became the new normal. It feels like centuries ago when I used to be able to catch a taxi to hang out with my friends at a nearby Shisanyama. But is it getting any better?

There is less and less movement each day that I venture outside of the house. People seem to be gradually adjusting to the new way of life. However, the municipal office down the road from my house has noticeable movement on Day 7, Thursday, after many people received their social grants and pay cheques a few days ago, and the rush to purchase electricity and pay water bills.

With the new public transport regulations announced by Minister of Transport Fikile Mbalula on Wednesday 1 April, permitting 70% capacity in taxis provided that people wear masks, I noticed an increase in taxi hooting on the morning of Day 7.

And as someone who uses public transport, and knows the conditions thereof, we should all be concerned by this shift from government. President Cyril Ramaphosa might have promised mass testing as a mechanism aimed at reducing local transmissions, but the new public transport regulations are a dampener.

On the brighter side, the lockdown has afforded us more time. How one chooses to use the time can greatly reduce the uncertainties, and in my case anxiety. I have enough time to include yoga in my daily schedule, to read, catch up on my favourite series and discover new music. This has also meant spending less time obsessing over the latest update on the virus. – Ayanda Mthethwa

Kibler Park, Gauteng: My area of residence in Johannesburg South is generally quiet, even without the Covid-19 induced lockdown. When you’re out for a walk, you’d be lucky to encounter anyone on the street.

One area which is usually a hub of activity is the park closest to my home. Whether it’s toddlers swinging, or teenagers hanging about on the park benches, you’re bound to encounter someone.

When I went past it a few days ago, it was abandoned. Ironically, it had been freshly painted prior to the lockdown being announced because schools were due to be closed.

Now it just sits there, brightly coloured and glistening – with no one to play in it. While passing by, I thought of how parents have been explaining to their children who are cooped up in their house that they can’t go play at the park. It must be a difficult task. The adults too have played their part.

My friends who drive by Uber have shared with me that there is a visible police presence. They say the police seem to be mostly targeting those who are walking, to stop them and question them. But if you are in a car, they hardly bother you.

Our local Spar is walking distance from our homes, and some people don’t have cars, nor money to request a two-minute Uber trip.

Thankfully, there haven’t been any reports of abuse of power by the police on our neighbourhood watch WhatsApp group. – Yanga Sibembe

Tuesday or Saturday, the days all feel the same

Mowbray, Cape Town. In the past seven days, I’ve left my house once. On the day that I went to the shops for groceries, the busy streets of Main Road were dead quiet. In the 30 minutes I spent on Main Road there wasn’t a single taxi on the road, the cars were few. There weren’t too many people at the shops either.

While there are a number of videos of soldiers and police officers roaming the streets and physically assaulting residents, I haven’t seen them police my area in the same way. There’s little to no activity during the day and night. It feels surreal living through this and knowing that this is my life for the next few weeks – perhaps longer.

The days feel the same. It feels weird not looking forward to the weekend because Saturday and Tuesday feel the same; watching TV, catching up with the news, calling friends, scrolling through social media. I have to make an effort to remember what day it is because they all feel the same. – Karabo Mafolo

Rondebosch, Cape Town: Things are still exceptionally quiet in my neighbourhood, except for the sound of children playing across the road and the odd car speeding past. The police drive past my street at least once a day. So far, no one’s been caught out of doors illegally, but there are still one or two rogue joggers who insist on getting their standard workout.

Others have found creative ways to get some exercise while obeying the lockdown. People are skipping, jogging in their gardens, and in my building there’s a woman who runs up and down the steps. I’ve started doing 30-minute workout videos in the morning to shake off the cabin fever.

A few houses in the area have put up rainbow pictures and encouraging messages to “be strong” and “stay safe” during the lockdown. It’s quite sweet.

For the first few days of the lockdown, people were making frequent trips to the supermarket, but it’s less common now. This week I went to the Pick n Pay and Checkers on Main Road. For both, I had to wait in a long queue, each person standing a metre apart from each other. At both shops each customer gets sprayed with hand sanitiser upon entry.

Engaging in calming activities like colouring, knitting and watching Netflix has been a saving grace when anxiety tries to kick in. But it’s been so easy to forget to go outside for some sunlight. At some point my mood was dipping, because I hadn’t stepped outside in a few days and after an hour in the sun I felt a massive improvement. – Sandisiwe Shoba

West Rand, Gauteng: It’s day seven of the official lockdown and the new routine that my family and I have adopted. Well, to be fair, I don’t think I was given much of a choice, especially with my mother saying “this could be the new normal” literally every five minutes.

She says it to me, my little sister and even her colleagues when she has a Zoom meeting with them during the course of the day.

I love her optimism.

But nothing feels normal and it does feel like one could go a bit crazy from the new routine of trying to live a normal life indoors.

But even on day seven, I miss the normal stuff about a Thursday morning; the cars driving past, the rattling of car keys indicating someone was leaving. I even miss sitting in the Johannesburg traffic.

It’s been seven days since the official lockdown commenced and sometimes it does feel like one of those thriller movies about the end of the world. You know, the one where Will Smith was the only remaining human on the screen for most of the movie with a dog…

Watch the trailer for Will Smith in I Am Legend:

But I am choosing to remain positive. Even though there is dead silence in my neighbourhood I need to learn to appreciate the silence because even though my mother wants to believe that this could be the “new normal”, I want to believe that on 16 April 2020 things can somehow go back to the way they were.

Between work and trying not to read and watch too much news, I meditate and I do yoga and I remember that you’re lucky and safe and that this lockdown is happening so that the country (and the world) can mitigate a virus that is impacting on so many lives.

So yes, I miss normal, but I am coping with weird. – Chanel Retief

Residents are anxious about falling foul of the regulations

Braamfischer, Gauteng: It’s raining buckets today and people are cocooned inside their homes. For the most part, there has been very little movement in the past week, with taxis operating according to lockdown guidelines.

Each day there are least one or two appearances by police officials who come and survey the area for any gatherings and to see if people are attempting to travel to other parts of the township.

Some have threatened residents at the local Spaza shop with tear gas and slaps if they do not “go inside immediately”. Residents are very anxious as a result; street vendors who make their living selling snacks, fruit and vegetables are no longer trading on the streets, in fear of the police. No army personnel have come to their area yet as people had expected. For now, it is safe to say that people are showing discipline and high regard for the rules and guidelines that have been laid out by government. – By Lelethu Tonisi DM