Waking up to the reality of a 21-day shutdown 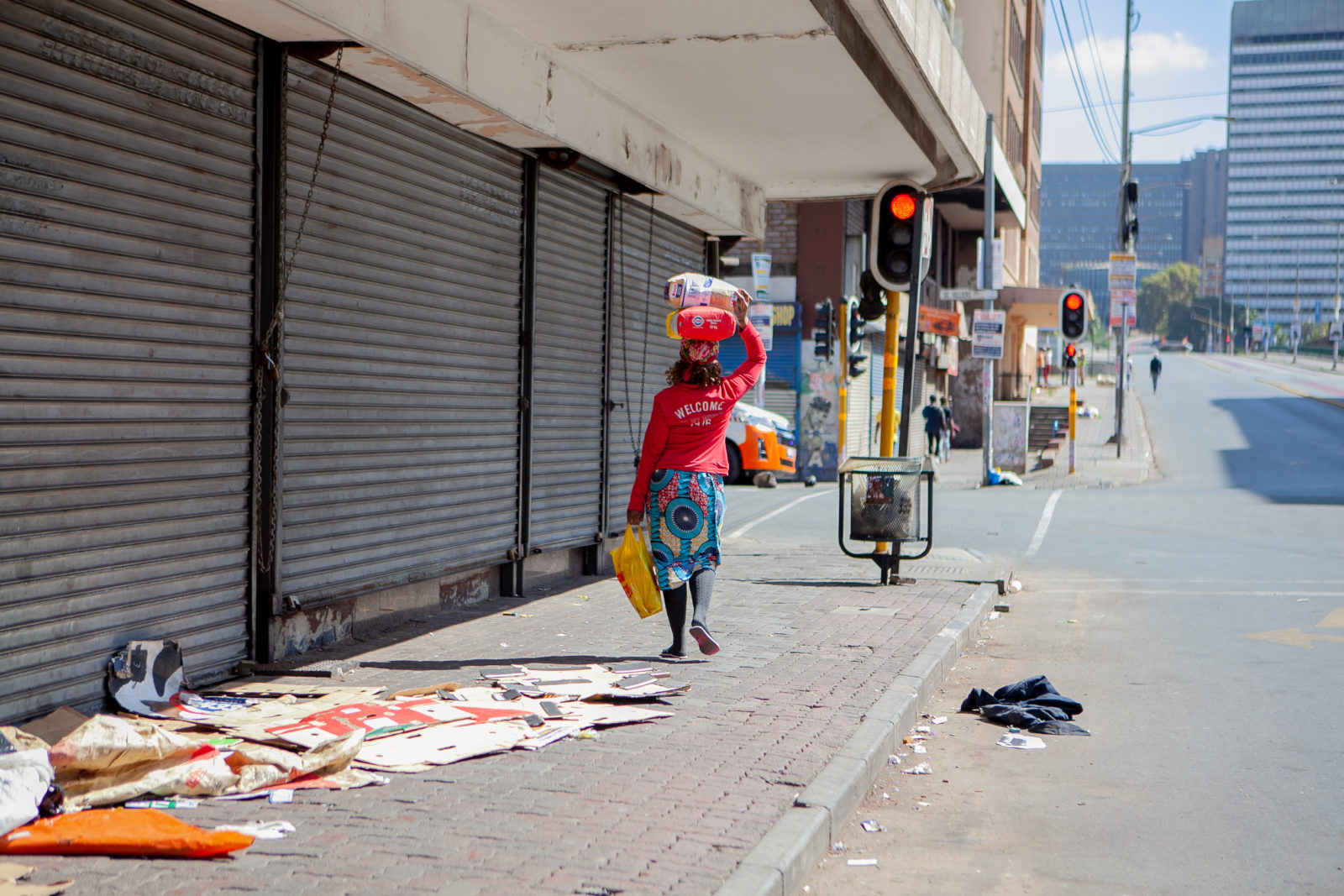 Protea, Soweto: The usually busy Chris Hani Road was strangely quiet. A number of women lined the streets, some with towels wrapped around their waists while others were in pyjamas. Some stood around in small groups.

There were only four Metro officers in the vicinity, and no sign of the army. A few people were freely moving around in Soweto. Most were headed to the shops to buy groceries. Hundreds queued at Shoprite. Dozens queued at Nedbank ATM’s and throngs more queued at the Roots Butchery in Protea Gardens Mall in Protea.

Nearby in Protea South, which has become a headquarters for nyaope addicts, it was business as usual. Nyaope addicts went about their business but they were not grouping in large crowds as they normally do.

“I just need toilet paper but it’s not worth the wait,” one woman was overheard saying while her colleague said she had managed to get all her groceries the previous day on 26 March 2020.

Many other people chose not to leave their homes in Chiawelo, Soweto and others went about their normal business.

“There is no army or police, they just wanted us to stay in our houses. We are just being punished,” one guy said to his friend. “They security forces will be here before the end of the week,” his friend said.

From the situation in neighbouring areas in Soweto, it was clear that most people stuck to the regulations aimed at capping the spread of the coronavirus though social distancing was ignored.

Many essential services workers leaving for work in the morning wore masks and hand gloves while others had no protective gear. Taxis were running with a few people but some were filling up. There remains a huge gap in enforcement. – By Bheki C Simelane

The streets were empty except for a rogue jogger

Rondebosch, Cape Town: On Friday morning the streets basically were empty, except for a rogue jogger who passed by my front gate. I’d like to think the sweaty, anguished look on his face was a sign of guilt…but perhaps I’m digging too deep. Meanwhile, the elderly couple across the road have resorted to running laps around their garden while the kids from the neighbouring house watch on from a tree. All in all, it’s eerily quiet. This road is usually buzzing with activity – annoyingly so. Today, the wind can be heard rustling through the leaves, birds are twittering secret messages to each other and the local Egyptian geese are engaged in a loud domestic argument. So far, I’ve seen only one vehicle drive out of a nearby apartment block. My inner cynic assumes people are nursing hangovers from last night’s partying. Things got quite rowdy close to midnight.

Strangely enough, a private security guard is still roaming the streets.. It seems our neighbourhood watch aren’t the most caring bunch. – Sandisiwe Shoba

Ekurhuleni, Gauteng: My regular mornings begin at 4.30am and the immediate sound I usually wake up to, apart from my alarm, is the taxi hooting two streets away from my home.

Lockdown is finally in effect and I woke up to the sound of birds chirping on Friday morning. An unusual occurrence. The birds seemed to have drowned out the taxi noise, but I heard a hoot from a distance.

I took a step outside the front gate and was overwhelmed by the silence. What is usually a bustling road on a Friday morning, seems to have been deserted.

Two, three people could be seen walking to the Somali spaza shop next to the inactive municipal offices. The spaza shop is an immediate convenience store and services a fair number of people. With movement restricted, the spaza will see many faces.

As I battle with the panic and anxiety that surfaced as a result of the spread of the virus, I will remember this particular morning for the stillness and peace it instilled in me. Knowing that my community is doing its part to curb the spread of Covid-19 is enough to suppress my anxiety. – Ayanda Mthethwa

Braamfischer, Gauteng: Waking up and looking around my neighbourhood 10 hours into lockdown I find that nothing much has changed. People are still living their normal day-to-day lives. I woke up to blasting maskamdi music and the sound of kids screaming down the road, laughing. As I peeped further outside, quite a few people were in the streets conversing. In the township, social distancing may be a little tricky because although people don’t have much, what they do have is a sense of community. There are no high walls and alarms separating us. And in this time of lockdown, I am compelled to think people are going to be even more social. There were no taxis this morning towards 10am, except for one which was parked outside a house. I didn’t hear a single taxi hooting which is very unusual because once you reach the “main”/ tarred road, there are usually harmonies of hooting all at the same time but today it was quiet.

With the schools closed, I don’t see the usual vendors along the street. This neighbourhood is usually full of kids from other area codes and they make the space lively, today there was no such liveliness. Outside the school premises it was quiet. I haven’t seen anyone with a shopping bag from town either.

Walking past one young lady, I ask her what she thinks of the shutdown. She tells me that she is annoyed already. “I don’t like being in the house a lot because my mom is a slave driver, now I have to do all the chores every single day and I can’t escape, it’s annoying.” she said. – Lelethu Tonisi

Observations from a balcony

Emmarentia, Gauteng: I went to sleep 30 minutes before midnight on Thursday. At that point, there were no members of the South African Police Services (SAPS) or the South African National Defence Force (SANDF) in sight. When I woke up on Friday, that hadn’t changed. I wondered which areas these officials, meant to enforce the lockdown, were deployed to. The images on my television screen offered some answers.

According to the news, a number of arrests had been made in Hillbrow, Joubert Park and surrounding areas. Perhaps this intrigued me because I had imagined that members of the police and army would especially be deployed to areas like mine, where more people are expected to have travelled outside of the country by virtue of their class.

On my television, a reporter named David McKenzie tells CNN Newsroom that the South Africans are taking the coronavirus very seriously. Beside him, more than 15 officials, an amalgamation of SANDF, SAPS and Johannesburg Metro Police stand on guard. Meanwhile, on the other side of McKenzie, a group of homeless people sit outside Park Station waiting to be housed by the government for the next 21 days.

Meanwhile, in my corner of the world, just as I am certain that there won’t be anyone defying the regulations of the lockdown, a jogger runs past my balcony and quickly disappears around the corner. And so, I wonder again, will my neighbourhood see any officials on our streets to implement this lockdown?  – Sumeya Gasa

Mowbray, Cape Town: At the start of Day 1 of the lockdown, the streets are quieter than usual. The loud construction happening across from where I live has stopped, the street vendors who sold their fruit and vegetables on the corners of Main Road are nowhere to be seen. Taxis on Main Road are few and all the restaurants are closed.

Yesterday was buzzing with customers lining up outside Chicken Licken, some standing a metre away from each other, some with masks and gloves. Today, there are few people in the streets. The few that are seen outside walk past with their Pick n Pay plastic bags; a few street sweepers are sweeping.

It’s hard to not frantically read any and every story about Covid-19, but I’m trying to adjust my routine to a new normal and take charge of the things that I can control.

I’m trying to break the monotony of being in lockdown by doing something other than watching Netflix for the whole night. I’ve started home workouts; I’m using the colouring book I bought a year ago. I’ve also started a 1,500 piece puzzle, which is difficult but a great addition to my new routine.

I have regular phone and video calls with a close friend since we can’t see each other. We talk about what shows we’re watching, how our days were and our families. It feels good to talk about anything other than the “invisible enemy” that has so rapidly changed our lives. By Karabo Mafolo

I could hear the birds chirping

But I didn’t know that once the clock struck midnight, so to speak, it could feel extreme, it would alter my whole life.

A typical Friday morning is getting up and hearing the sounds of my kettle whistling indicating that the water had boiled, my TV would be on booming with sounds from Comedy Central and my neighbour’s kids would also be playing outside with a ball just before their parents would take them to school.

There would also occasionally be the chitter-chatter of people who are jogging or walking their dogs past my house. What I would also note is the sound of cars driving past my house to get to the N1 Highway to Pretoria. To some extent, I could even hear the traffic on that very highway.

Today on day one of the official lockdown, I heard different sounds.

I could hear the birds chirping. I could hear the water flowing in the water feature in the garden. I had never actually been able to hear that. But I also heard for the first time since I have lived in this house no sound coming from the highway.

The government has made it abundantly clear that they would be taking this lockdown extremely seriously. I thought that I would at least hear the sounds of my neighbours’ kids playing outside, but it was quiet.

I thought I would hear the sounds of police cars or soldiers because that’s how I dramatically envisioned this whole lockdown in my head, but I have heard nor seen nothing.  You’d think they would be out especially now since the Minister of Health just announced the first two Covid-19 deaths in South Africa.

As peaceful as the silence should be it has just opened my eyes to the fact that I don’t think I like the quiet. – Chanel Retief DM