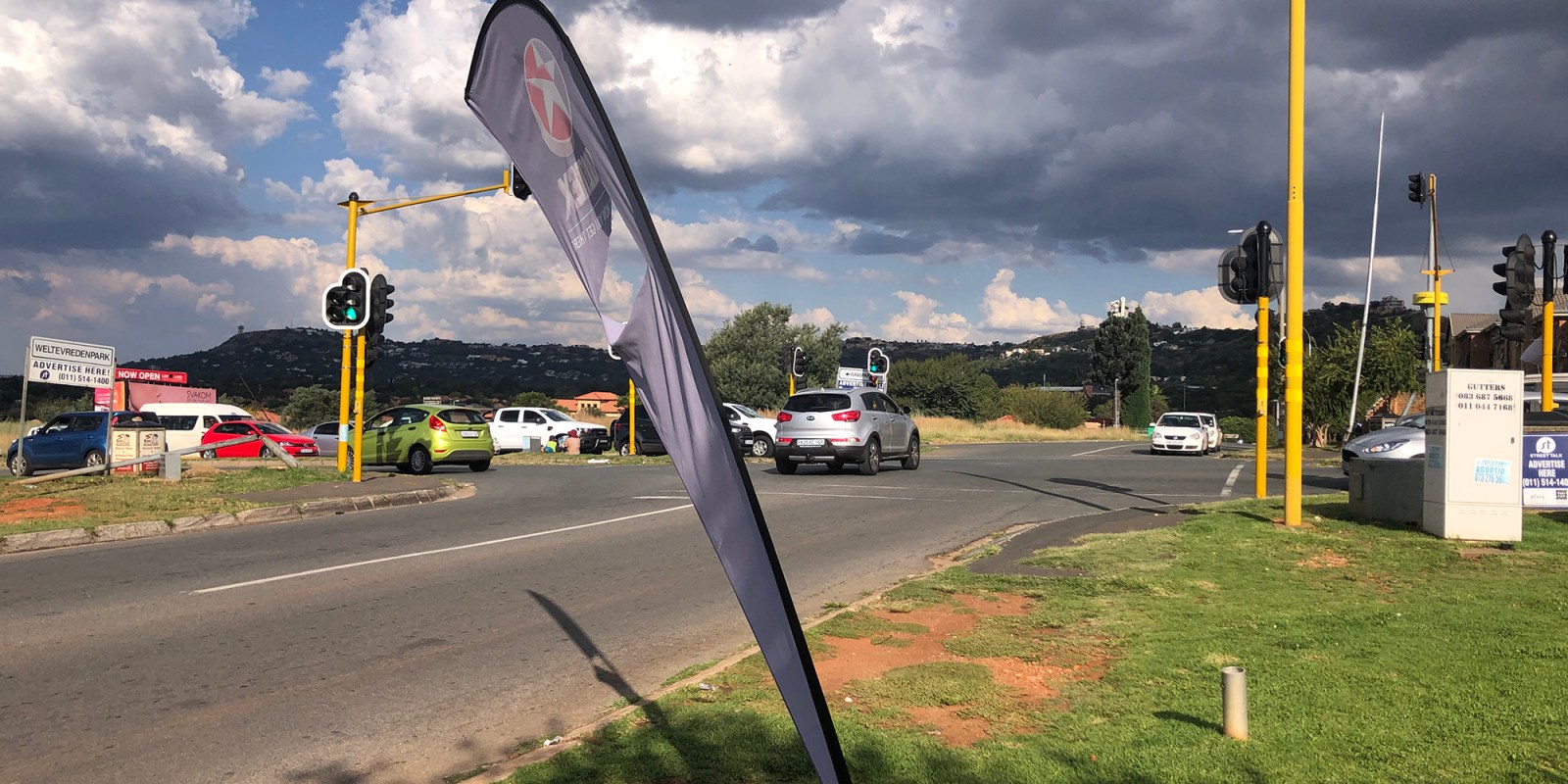 At times, domestic workers congregate at the bus stops

Emmarentia, Joburg: It’s the morning before the lockdown and the view from my balcony hardly gives away that anything is amiss. A domestic worker strolls away from the convenience store downstairs with a loaf of bread in hand. She waits as a few cars pass by before crossing the street. By Friday at this time, she will technically not be allowed to move as freely with just a single item on her grocery list.

Over the past few days, I’ve noticed a decrease in traffic – both vehicle and human – in my area. This morning, before the imminent lockdown, seems a little busier in comparison. There are more vehicles whizzing past my little corner of the world and I wonder where they’re off to.

I notice a few motorists have covered the lower halves of their faces with masks. A jogger huffs and puffs before dashing across the street. An e-hailing driver who usually parks his car under the trees outside my building does so again this morning – earlier than usual. Meanwhile, a security patrol vehicle drives past a man who has been circling the same spot all morning. Moments later, a bakkie pulls up on the man’s corner and he leads the driver into a home next door.

The vacant bus stops are usually occupied at this time by commuters waiting for Metro buses travelling in different directions. At times, a group of domestic workers congregate at the bus stops on their way back from the convenience store before going their separate ways.

Today, apart from the occasional bird briefly perched on the bus shelters, they are completely abandoned. A man in shorts strolls across the main road before a pair of runners jog past the bus stops. Only time will tell how these morning rituals will fare under a lockdown. – By Sumeya Gasa

Rondebosch, Cape Town: Things have begun to slow down in the suburb as people prepare for lockdown tonight. By early morning on Thursday, fewer cars and public transport vehicles were travelling along the roads. Getting in a taxi, it was reassuring to see a guardjie (taxi guard) wearing a mask and gloves while collecting money from passengers. At the local Clicks on the Main road, several people had queued outside waiting for the shop to open – an uncommon sight. Very few people were at the local Pick n Pay – a stark change from Wednesday evening when it was still bustling with customers.

A few elderly people in my apartment block were having their medicines delivered, while garbage trucks were going house to house collecting refuse. The streets are definitely a lot quieter, especially near the University of Cape Town, where all students were told to go home.

It seems there are fewer homeless people on the street. One woman I spoke to, who isn’t homeless but chooses to be on the street, said she wouldn’t be going into a shelter for lockdown but would be going home to stay with her mother.

A few people were seen jogging along the Main road, and a few walked their dogs past my apartment block. The local neighbourhood watch hired a few “security guards” to watch over our street a few months ago. Those men were still on watch duty this morning. – By Sandisiwe Shoba

The world seems to have stopped where I live

West Rand, Gauteng: With the 21-day lockdown only hours away, I am surprised how my area is starting out on this thing early, including the businesses where I live.

I have been working from home for the last two weeks and prior to President Cyril Ramaphosa’s address this past Sunday it still seemed like I was living around some sort of normality (among all the chaos).

But after Cyril Ramaphosa made his address declaring a 21-day lockdown it seems as though my neighbours, the businesses and everyone who usually passes through here has already taken the lockdown very seriously.

I live on the West Rand near the off-ramp onto the N1 highway going to Pretoria. And if you stay on 14th Avenue, you will see the big MTN building. In front of my house there is a small EOH firm which houses over 20 cars in its parking lot between 9am and 5pm.

To drive to work every day (in Rosebank) I have to get past the EOH building, driving past the off-ramp and then onto 14th Avenue at around 8am, and it’s a half-hour mission, sometimes more.

I felt weird driving there with someone this morning at around 7.30am, because that’s when traffic usually picks up, to find that my general time had changed from half an hour to about five minutes.

EOH was deserted. The off-ramp leading to the N1 probably saw about five cars (maybe more, maybe fewer). And the traffic going into MTN was not as chaotic as it normally is.

Afternoon traffic for me has also always been even worse as I always take 9th Avenue to get home and drive past a sports betting bar. Even when I drive past there at around 5pm (almost) every day, it’s already filled with the cars of the scores of people inside the bar placing their bets.

With most sporting events cancelled it does make sense that when I walked past there on Wednesday at exactly 5pm, there were only a handful people at the bar.

By Friday, come lockdown, there will be no cars at the betting bar. There will be few to no cars going onto the off-ramp or into the MTN building. And the likelihood of anyone being present at EOH is very slim.

The world is still slightly spinning here. But is sure to come to a halt altogether come Friday morning. By Chanel Retief

Buying food on the eve of a lockdown

Ekurhuleni, Gauteng: On the eve of the 21-day country lockdown to curb Covid-19, Tsakane residents in Ekurhuleni populated supermarkets at their local mall in what seemed like preparation for the lockdown.

Food items like maize, bread, soap, tinned foods, and milk were flying off the shelves at Tsakane Mall’s Spar and Shoprite supermarkets on Wednesday 25 March.

Although the 25th counts as payday for many, the same behaviour of buying foods in bulk was observed on Tuesday when the writer visited the mall, a day after President Cyril Ramaphosa announced a 21-day country lockdown to control the spread of the novel coronavirus.

On both visits, upon entering the mall, Daily Maverick observed that shoppers were not allowed to enter the mall unless they had used hand sanitiser. The same protocol was followed by all stores operating within the mall premises.

While a few shoppers could be seen wearing masks and gloves, many could still be seen standing less than one metre apart.

On the shelves, items like hand sanitisers and hand wash were nowhere to be seen. Even though other stores like Pick n Pay have put a limit on the number of essential items shoppers can buy, a Clicks store packer at Tsakane Mall told Daily Maverick that when the store stocks up on hand sanitiser, they fly off the shelves by 11am because some customers buy more than they need.

Outside the premises of the mall, it was business as usual, with many people rushing home from work. Informal traders could be seen packing up what remained of their stock as it seemed even their shelves were emptied. By Ayanda Mthethwa DM

Shops and liquor are buzzing

Soweto and Lenasia shops:  At the Game at the Trade Route Mall in Lenasia, there was a very long queue by 8.25am on Thursday. Security guards at the door told Daily Maverick that they were letting in 10 people at a time to keep the number below 100. When asked how they managed this because people were leaving the store without anyone monitoring the numbers, they said: “That is where we also have difficulty.”

It was the same at the Trade Route Mall Nedbank branch in Lenasia. Scores of people formed a long queue, which extended to one of the main entrances to the mall. Pick n Pay was the same. A rude woman who kept guard at the door was turning away the elderly who were hoping to be brought ahead of the queue.

Soweto’s residential areas were unusually quiet on Thursday morning, but elsewhere, shops and liquor stores were buzzing – the kind of activity that is experienced only during the December holidays.

Spaza shops in the area, most of whom thought they would not be allowed to open, had delivery vans filling their stores with stock. Pakistani, Somali and Bangladeshi shop owners were relieved that they would be allowed to stay open.

When Daily Maverick spoke to one of Somali shop owner on Tuesday, 24 March 2020 before it became clear they would be allowed to open, said: “If Shoprite will also be closed, who am I to remain open?” he asked. The Lenasia police station also had a number of people queueing to go in.

The police station was buzzing with many leaving the building wearing masks and hand gloves.  – By Bheki Simelane. DM