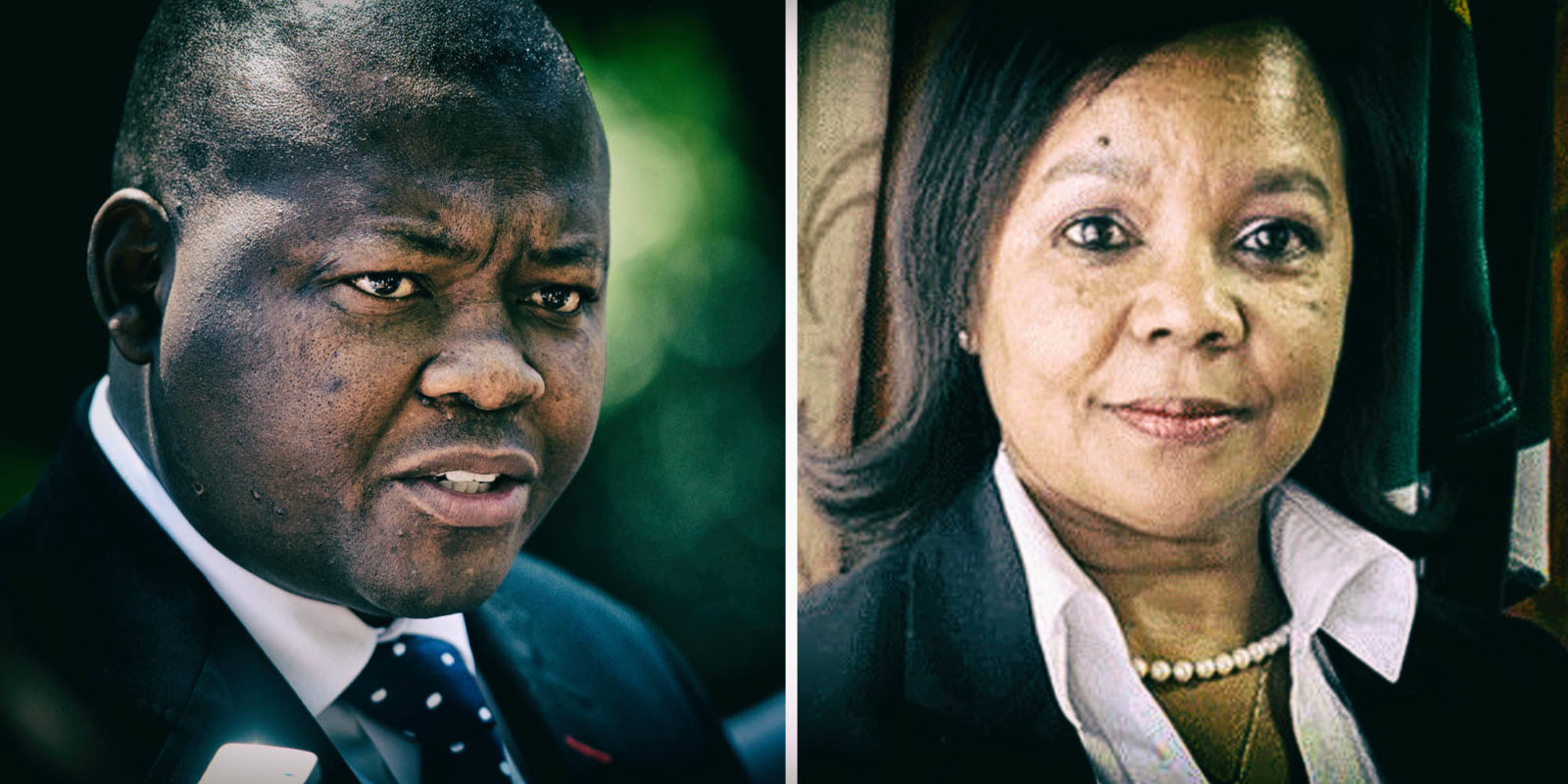 Three months after Western Cape Judge President John Hlophe’s lawyer, Barnabas Xulu, was ordered to repay R20-million in legal fees unlawfully received from the Department of Agriculture, Forestry and Fisheries, the JSC informed Deputy Judge President Patricia Goliath that it is investigating a complaint against her, lodged by Xulu.

On 6 March 2020, the secretariat of the Judicial Conduct Committee (JCC) wrote to Western Cape Deputy Judge President Patricia Goliath informing her that Justice Phineas Mojapelo, a member of the JCC, would determine the merits of a complaint lodged with the JSC by Barnabas Xulu, the lawyer for Western Cape Judge President John Hlophe.

What seems to have irked Xulu, according to an affidavit dated 5 August 2019 and which he submitted to the JSC, is that Judge Goliath had been hesitant to issue a consent order for the payment of a R20-million “settlement” in legal fees outstanding from DAFF to Barnabas Xulu Incorporated (BXI).

Goliath, said Xulu, had advised him that a “lot of money” was involved and that this was making her “overly cautious in granting the order”.

On 1 April 2019, Xulu and his Senior Counsel, Thabani Masuku, visited Judge Goliath in chambers in Cape Town in order to persuade her to execute a “settlement” agreed to verbally between the Department and BXI.

The “settlement” has subsequently been declared invalid and was set aside by Judge Owen Rogers in January 2020.

A recording of the meeting between Xulu, Masuku and Goliath in her chambers was posted on 21 February 2020 to YouTube.

There were only three people in the room during the meeting and Goliath has confirmed that she did not make the recording. It is illegal to record a conversation without disclosing this beforehand.

Xulu has represented Hlophe in various matters including a pending JSC disciplinary hearing as well as acting as the legal representative in a case involving businessman Matthews Mulaudzi, who appeared before Hlophe as a judge in a R48-million theft matter.

In 2017, SCA Judge Visvanathan Ponnan handed down a scathing judgment with regard to Hlophe’s conduct in the Mulaudzi matter. Ponnan not only pointed out the fact that Xulu was Hlophe’s personal attorney, but also that Hlophe had allocated the case to himself while he was not one of the duty judges.

After Xulu and Masuku had failed to convince Goliath in 2019 to issue the order for the R20-million payment, Xulu wrote to Hlophe, complaining about the conduct of Hlophe’s deputy.

In his affidavit to the JSC, Xulu said after the delays caused by Goliath’s request for further information, BXI “directed correspondence to the Honourable Judge President Hlophe which constituted a complaint and sought his intervention with the DJP [Deputy Judge President Goliath] if same fell within the mandate of his office.”

Xulu adds that he had been “deeply perplexed” that Goliath would have requested the Director-General of the National Treasury to depose an affidavit “confirming the nature of consultations to which he was not a party”.

On 16 May 2019, Xulu was informed that Goliath was no longer hearing the matter and that “BXI should accordingly collect all files in this matter from her chambers”. She had informed Xulu that BXI’s letter of complaint to Hlophe had “compelled her to release the file”.

In the end, Hlophe allocated the case to Judge Elize Steyn who immediately issued the order for the writs on 16 June 2019. By August, the sheriff had paid R17,657,098 – in accordance with the second writ – into the BXI trust account which Xulu then shifted to his business account “from which it was disbursed”.

But in January 2020 the wheels came off for BXI when Judge Owen Rogers handed down a significant judgment in the Western Cape High Court ordering BXI to pay back about R20-million in legal fees funnelled to his firm by the DAFF, which had been entitled to free legal advice from the Office of the State attorney.

Rogers heard the case as he had been on duty for the setting aside of the order.

Judge Rogers ordered Barnabas Xulu Incorporated (BXI) to repay DAFF by Thursday 30 April 202o, “the amount of R20,242,472, which it received pursuant to the invalid writs of execution and notices of attachment”.

Rogers also ordered that a service-level agreement “purportedly concluded between the applicant [DAFF] and the First Respondent [BXI] on 23 May 2017 is declared invalid and is reviewed and set aside”.

Another settlement agreement on 12 April 2019 was also declared invalid, reviewed and set aside by Rogers.

Xulu was joined by Rogers as a fifth respondent in the matter and DAFF was ordered to verify BXI invoices by 9 April 2020. Xulu has until 12 March 2020 to “show just cause why he should not be ordered to pay the amount. BXI was also ordered to pay DAFF’s costs.

Rogers pointed out that Deputy Director-General: Fisheries Management, Siphokazi Ndudane had acted as minister Zokwana’s proxy in the department, bypassing director-general Mlengana’s authority as the accounting officer. Ndudane had not been authorised to broker the settlement with BXI, he found.

“Officials who exercise public power are constrained by the principle, fundamental to our constitutional order and the rule of law, that they may exercise only those powers and perform only those functions which are conferred upon them by law.”

Apart from rescinding Steyn’s order, Rogers pointed out several breaches of the State Liability Act including that Xulu’s firm had only notified the new minister, Barbara Creecy, after the first writ (a command from the court) had been issued and executed.

Rogers noted that the 30-day limit on the “satisfaction” of a final order had expired on 5 July 2019 without payment being made, an obligation of Treasury, had not been triggered, and BXI had not been entitled to request the registrar to issue the writs of execution. The sheriff had also not been entitled to execute and attach money in DAFF’s bank accounts to pay BXI.

All of this was in violation of the State Liability Act, said Rogers.

A consideration “which weighs with me” said Rogers at the time, was that BXI “was very much the author of its own misfortune”.

“The greater part of the amount the firm would be obliged to refund – R17,657,098 – is money which the BXI parted with after it had been notified that the execution was non-compliant with the State Liability Act.

“With this knowledge, BXI disbursed the proceeds… with almost indecent haste,” said Rogers.

As a firm of attorneys working for the state, BXI, said Rogers, could reasonably have been expected “to be familiar with the provisions of the State Liability Act and thus the defect in the execution it had levied”.

It was difficult not to conclude that Xulu “caused BXI to part with the money” despite knowing that the writ had been invalid.

“If he did not bother to look at the State Liability Act, he would seem to have acted in reckless disregard of the legality of BXI’s actions, ie at least with dolus eventualis.”

Rogers said “none of the requirements of the act were heeded”.

Rogers tore into the court’s registrars, saying it was a matter of concern that “writs were issued in this case without an inquiry into compliance of the State Liability Act.”

On 9 March 2020, the JCC secretariat announced that it would consider a complaint lodged by Goliath against Hlophe’s wife, Judge Sayaat Salie-Hlophe and that SCA Judge Nambitha Dambuza would lead the inquiry.

Goliath lodged a 14-page complaint with the Judicial Service Commission alleging “gross misconduct” on the part of Hlophe as well as his wife, Salie-Hlophe. Their actions, said Goliath, had compromised the proper functioning of the Western Cape High Court.

Goliath accused Hlophe of attempting to influence appointments to the Bench, of assaulting a fellow judge, while also claiming that Salie-Hlophe wielded unusual influence when it came to the appointment of acting judges in the division.

In its communication to Goliath with regard to the complaint lodged by Xulu, the secretariat said that “in the event of the above complaint being established, the appropriate remedial action will be one or more of the remedial actions set out in section 17 (8) of the Judicial Service Commission Act”.

In the meantime, the JCC has not made any announcement with regard to the charges of serious misconduct Goliath had lodged against Hlophe. DM

Vincent Lali for GroundUp
Save 4 mins