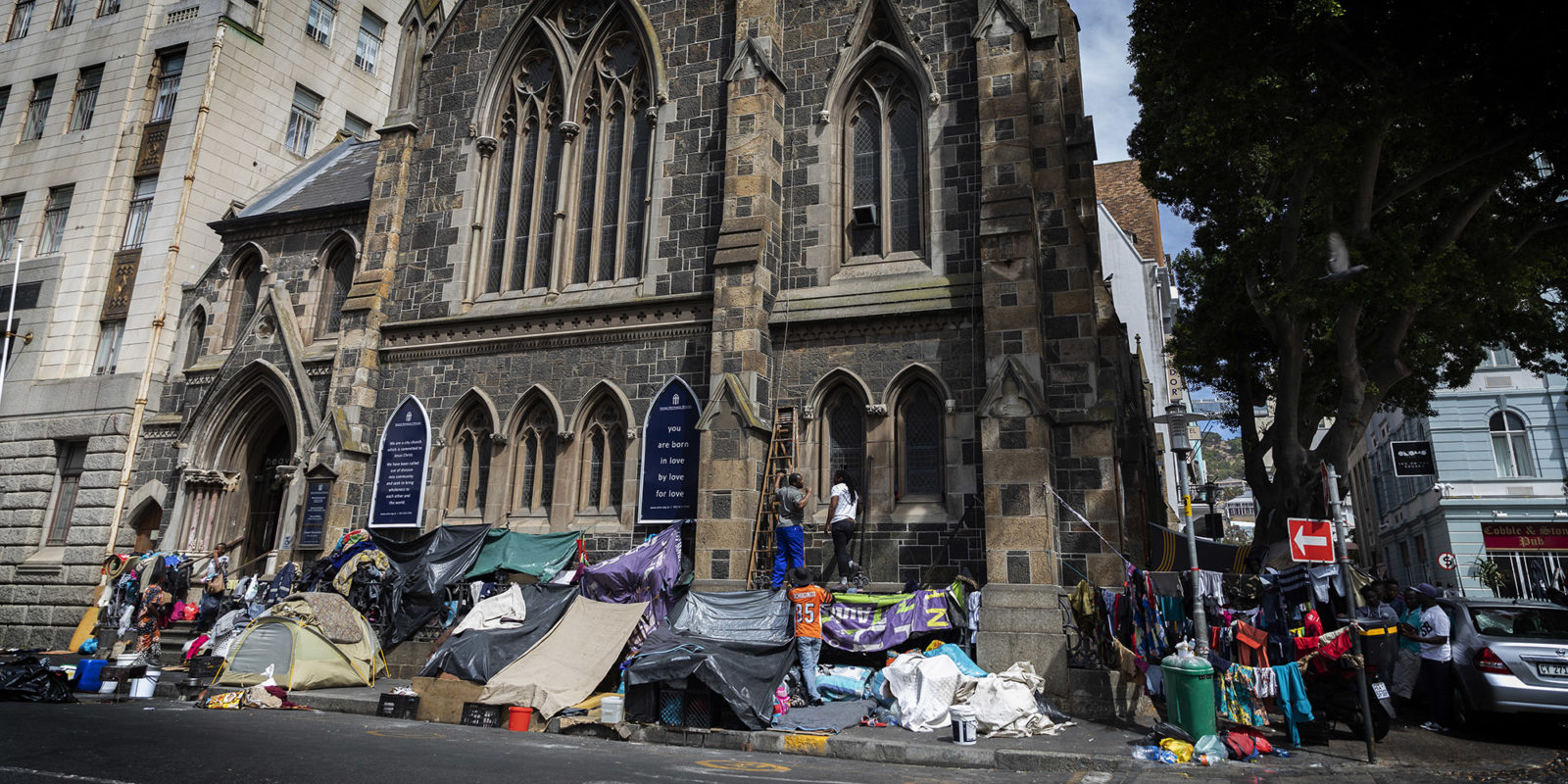 The Cape Town refugee crisis remains unresolved. Acting Judge Daniel Thulare will decide on February 17 whether the City can effectively evict refugees from Greenmarket Square where they’ve been living for nearly three months.

The interdict case between the City of Cape Town and refugees living at the Central Methodist Mission resumed at the Western Cape High Court on Tuesday 28 January, after it was postponed on Wednesday last week.

The City, represented by advocate Con Joubert, proposed an “interim arrangement” where refugees would be transported via minibus taxi to a site in Salt River, where Department of Home Affairs officials could conduct status determination and verify documents for the 600-plus refugees living at the church.

This would take place over seven days, after which the City wants to enforce its by-laws.

This comes after the City was tasked, in 2019, with providing the refugees with temporary alternative accommodation to allow Home Affairs to conduct the verification process.

The City said it had no housing available.

Joubert reiterated to the court that temporary accommodation would not be made available to the refugees as they “were not homeless” and did not qualify for emergency housing.

“The respondents did not file affidavits, so there is no evidence that they are homeless,” said Joubert who added the City did not have the “resources” or “land” available to house the group, which includes almost 300 children.

Joubert clarified that the City was not seeking an eviction order as it cannot remove people from inside the church building, but was trying to resolve the issue of people sleeping, cooking and defecating in Greenmarket Square.

He reminded the court that traders and businesses in Greenmarket Square were still losing income with many, including some who are foreign nationals, having to close shop.

Refugee leader Jean-Pierre “JP” Balous, who was representing the refugees in court despite bail conditions – he is charged with robbery and assault – stating he was restricted from entering the CBD without police permission, asked the City whether it could give a definition of “homelessness”. He also contended that his bail conditions stated that he must “inform” the police when entering the CBD, not ask “permission”.

Advocate Seth Nthai, representing the Department of Home Affairs, said the majority of the refugees had documentation.

“Only 68 are undocumented,” he told the court.

Nthai added that a team from Home Affairs was ready to conduct the verification process, should a suitable venue become available. Judge Daniel Thulare, who replaced Judge Kate Savage in hearing the matter, asked where the refugees would live, should the order be granted.

“Don’t I deserve to know where they will go?” asked Thulare.

The refugees, who have been living at the Methodist church in Greenmarket Square for close to three months, were hauled to court last year after the City applied for an urgent interdict against the group, prohibiting them from conducting a sit-in protest, damaging property and contravening the city’s by-laws.

The Rev Alan Storey had opened the doors of the church after the group was forcibly removed from outside the Cape Town UNHCR offices in Waldorf Arcade, where they had been demanding to be resettled to a third country.

Joubert said the City would present a draft order to the court. Judgment was reserved till 17 February 2020. DM

Commentators sharpen their tongues in preparation for return of PSL