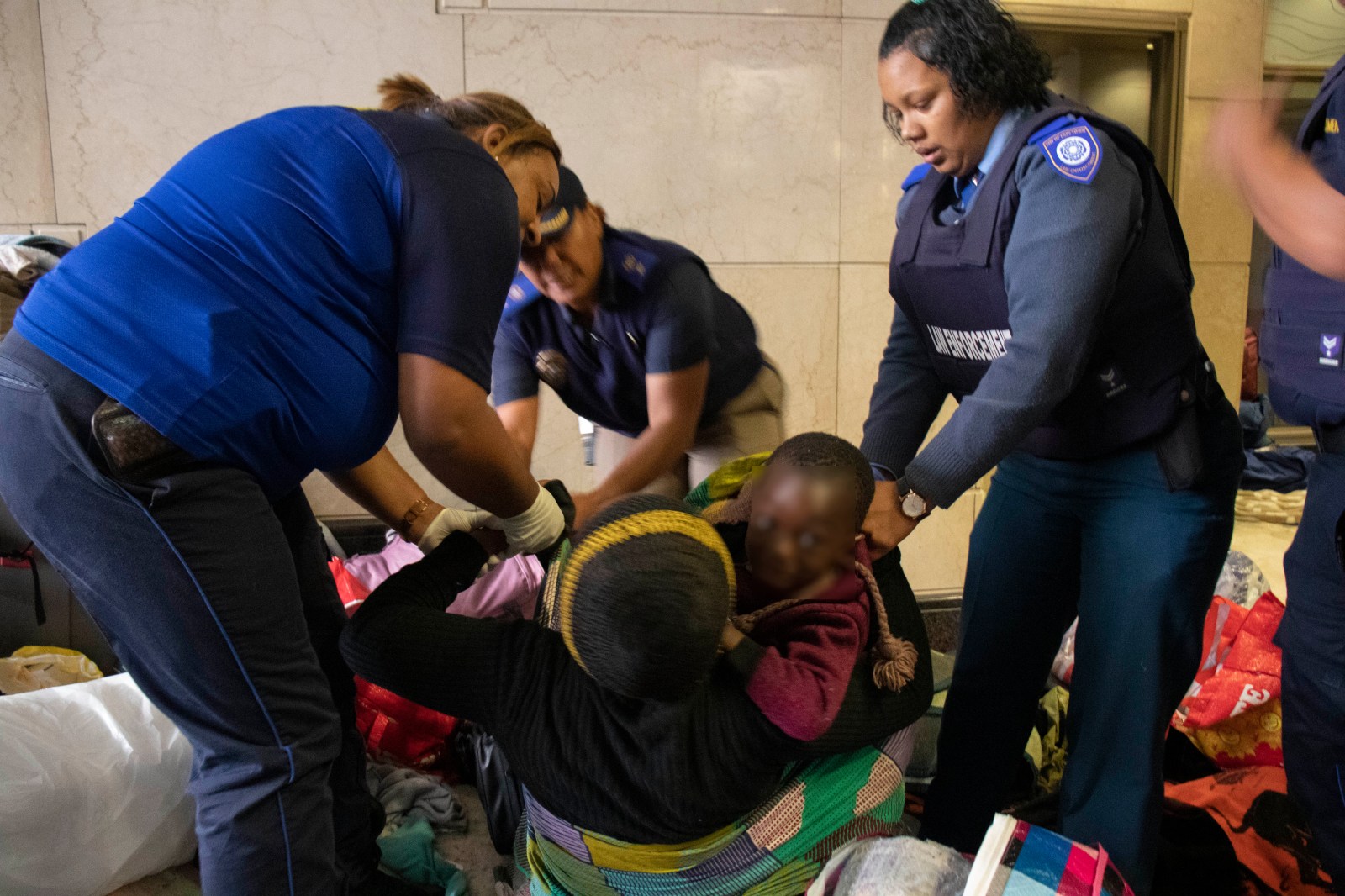 Chaos enveloped St George’s Mall in Cape Town after police were called in to evict around 300 refugees and asylum seekers who had camped outside the United Nations High Commissioner for Refugees (UNHCR) offices in Cape Town on 30 October 2019. Photo: Aisha Abdool Karim

Chaos enveloped St George’s Mall in Cape Town after police were called in to evict around 300 refugees and asylum seekers who had camped outside the United Nations High Commissioner for Refugees (UNHCR) building on Wednesday morning. About 100 people were arrested.

St George’s Mall Waldorf arcade was filled with screams and crying as police began to move through the building, dragging people across the floor and yanking children from their mothers’ arms.

For the past month, the group of asylum seekers and refugees have been occupying the UNHCR offices inside  the arcade. But an eviction order was issued and on Wednesday, a group of around 100 officials from the South African Police Service (SAPS) and other law enforcement officers arrived at the building and began forcibly removing people.

Daily Maverick arrived at the scene just after 11am as police fired three stun grenades outside the arcade, where the occupation had been taking place. Groups of armed police officers began entering the building and removing certain people. It was unclear how police were distinguishing who would be arrested and who was allowed to leave the premises.

As police moved through the corridor, walking over the mattresses and belongings which lined the floor, the officers began to use pepper spray while dragging some of the refugees out. Other officers went to mothers who were sitting on mattresses to the side. When the women refused to leave, or in one instance where a woman was injured and unable to stand, police began to grab the children from their arms.

“They just pushed us and our babies out like we’re rubbish, I have a small child with me and they could’ve hurt us,” said Theresa, a refugee from Burundi, who didn’t want to give her last name. “I just want my family to feel safe and we’re not safe here, South Africa is a bad place to stay in. I want to leave,” said a visibly emotional Theresa.

Several of the children ran back to their mothers after being pulled away; however, they were once again removed by the police. Once the children were taken out of the building, the remaining police officers told the mothers to leave the building and that their children would be returned to them outside.

After the majority of the building had been cleared, around five women came back into the building saying that they were unable to find their children. They yelled at the police that they needed to return their children or help them find them. Daily Maverick did not witness any police helping to reunite mothers with their children and it is unclear if these women received police assistance.

Some of the foreign nationals in the occupation returned to retrieve their belongings once the majority of the police had left. Some were told by police officers that the entire building would be cleared and all their belongings would be taken to the nearest police station where they could fetch them the next day. Some officers allowed those who were willing to leave the building voluntarily to collect their belongings before leaving and a few assisted them in carrying their bags outside.

Once the building had been cleared, police erected a fence to prevent people from re-entering. The crowd of 200 evicted foreign nationals then congregated outside the building entrance, chanting: “This is xenophobia”, “You are killing us” and “We want to go”.

Police used a water cannon to disperse the gathering crowd outside. However, they remained undeterred. One man stood directly in front of the water cannon with his arms open, saying, “Just shoot me, just kill me now”.

After firing the water cannon around six times, the crowd continue to congregate and chant. The police then fired another two stun grenades and began moving the crowd towards Greenmarket Square. Some foreign nationals then began throwing water and pieces of wood at the advancing police line before they scattered in various directions. A police line was then set up to prevent the group from returning to the area outside the building.

Outside of the Waldorf building, Berliy Bokemo, from the DRC, looked on as people removed their belongings from the building. “They’re removing people violently (from the building). They’re pushing everyone around, even the babies,” said Bokemo.

“I don’t feel safe here. The UNCHR must take care of me and take me to a safer country. You can see even with the way the police treat us that we’re not safe,” Bokemo told Daily Maverick.

The occupation started in early October when groups of foreign nationals camped outside the UNHRC offices in the Waldorf Building in Burg Street in Cape Town’s CBD. Refugees had demanded the UN assist them with either taking them back home or helping them return to their home.

Read on GroundUp: “Our blood does not want to be spilled in the land of South Africa”

SAPS’ Western Cape media liaison, Brigadier Novela Potelwa, said in a statement that around 100 people were arrested. According to Potelwa, police were on the scene to provide support to a sheriff of the court, who had been there to execute an eviction of around 300 refugees and asylum seekers. A court order was granted for the eviction by the courts on 18 October, said SAPS.

When specifically asked by Daily Maverick about the brutality displaced towards women, SAPS referred back to the statement.

“As part of the execution of the court order, taking into account the size of the group, officials from the departments of Social Development and Home Affairs are also present to offer technical support to the situation,” said SAPS.

Activist Zackie Achmat, who Daily Maverick observed asking the police for their court order, said: “Even if it’s done with a court order, you don’t do it that way.”

Some of the refugees sought shelter in the Central Methodist Church. Daily Maverick spoke to some of the people moving into the church, including families.

“They’ve asked us to leave (the Waldorf building) but we don’t have anywhere to go,” said Tiwasaka. Additional reporting by Suné Payne. DM