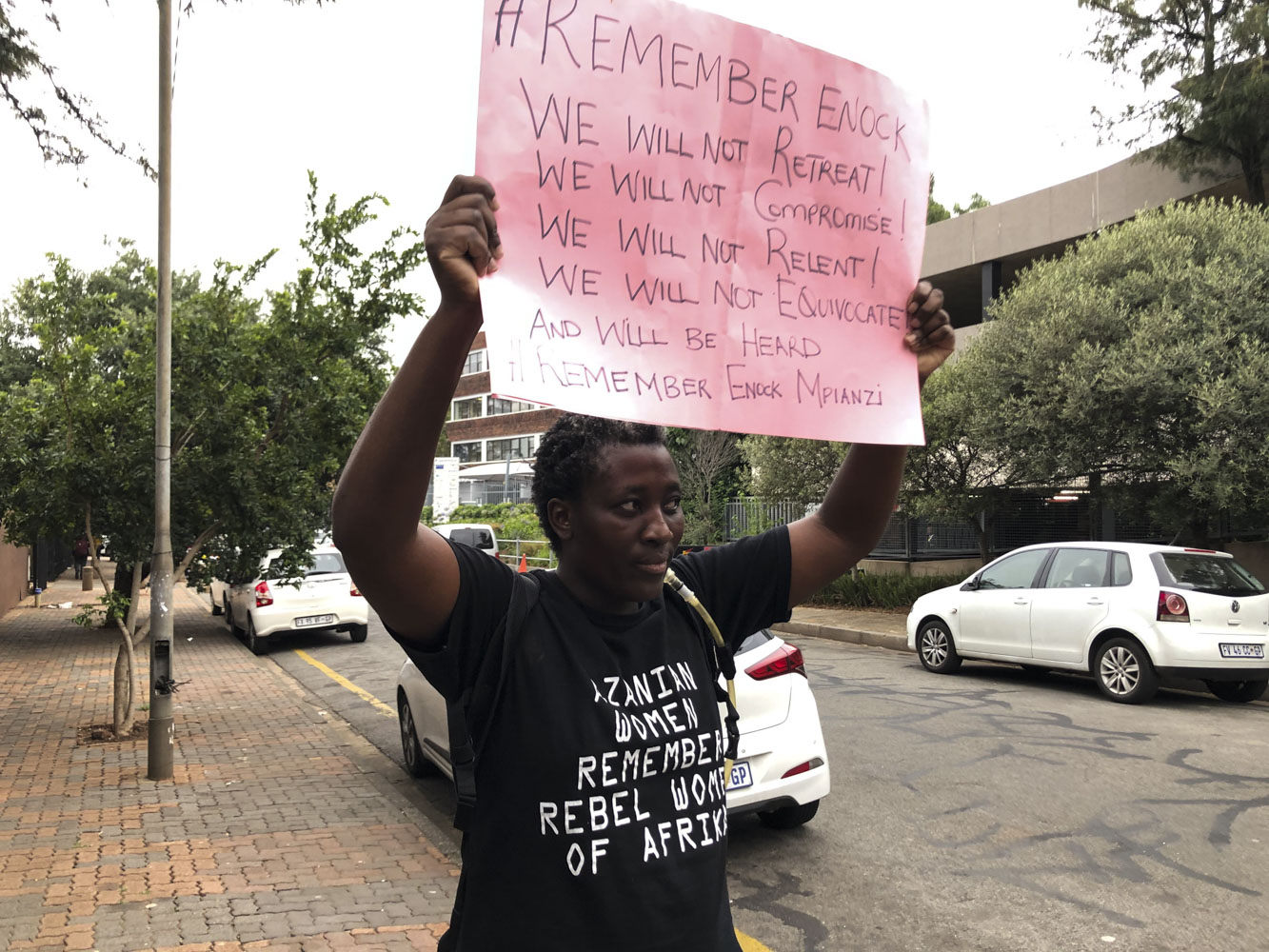 Luleka Flatela is an attorney for student right and has come to the vigil demanding justice for Enoch Mpianza. Flatela says that there is more to the story that is not being told of death of the grade 8 pupil. Photo: Chanel Retief

A small group of parents and concerned South Africans gathered outside Parktown Boys High School in Johannesburg on Tuesday 21 January. They did not know each other but all had a common purpose – to demand #JusticeForEnoch, the Grade 8 pupil, Enoch Mpianzi, who drowned while on a school orientation camp. Justice for the group begins with the suspension of all teachers who were involved in the tragic incident.

Holding a placard that read “A black child’s life is worth less than the price of a life jacket”, Natalie Ridgrid explained why she decided to join the protest outside the Parktown Boys High School in Johannesburg on Tuesday morning.

“Our schools are negligent,” Ridgrid said. “We trust them with our children every day but they are grossly negligent. They need to tell the truth, and they need to come out and tell us really what happened.”

The protest was held at the school’s main entrance where learners, parents and other citizens have placed bouquets of flowers and letters to 13-year-old Enoch Mpianzi.

Enoch was on a Grade 8 orientation school camp at the Nyati Bush and River Breakaway in Brits, North West when he went missing on Wednesday 15 January during a “water activity”.

The activity required the Grade 8 boys, including Enoch, to build a makeshift raft and sail it across the Crocodile River. During the activity, their raft capsized as there was allegedly a very strong current in the river following recent heavy rain in the area.

Several parents of learners who were at the camp told Radio 702 on 20 January that their sons, like Enoch, had not been wearing life-jackets on their rafts.

Luleka Flatela, an attorney for students’ rights, came to the protest on Tuesday to demand the school take accountability for their actions and to stop shifting the blame.

“Obviously they [the school] are evading the questions that are being asked on why the kids were left unsupervised,” Flatela told Daily Maverick. “Why were they in a crocodile-infested river with a strong current? Without lifesavers or life jackets? Without people that would make sure that they will be there in case of emergency? Their account of the events leaves much to be desired. In fact, they are covering their backs because they have been exposed.” 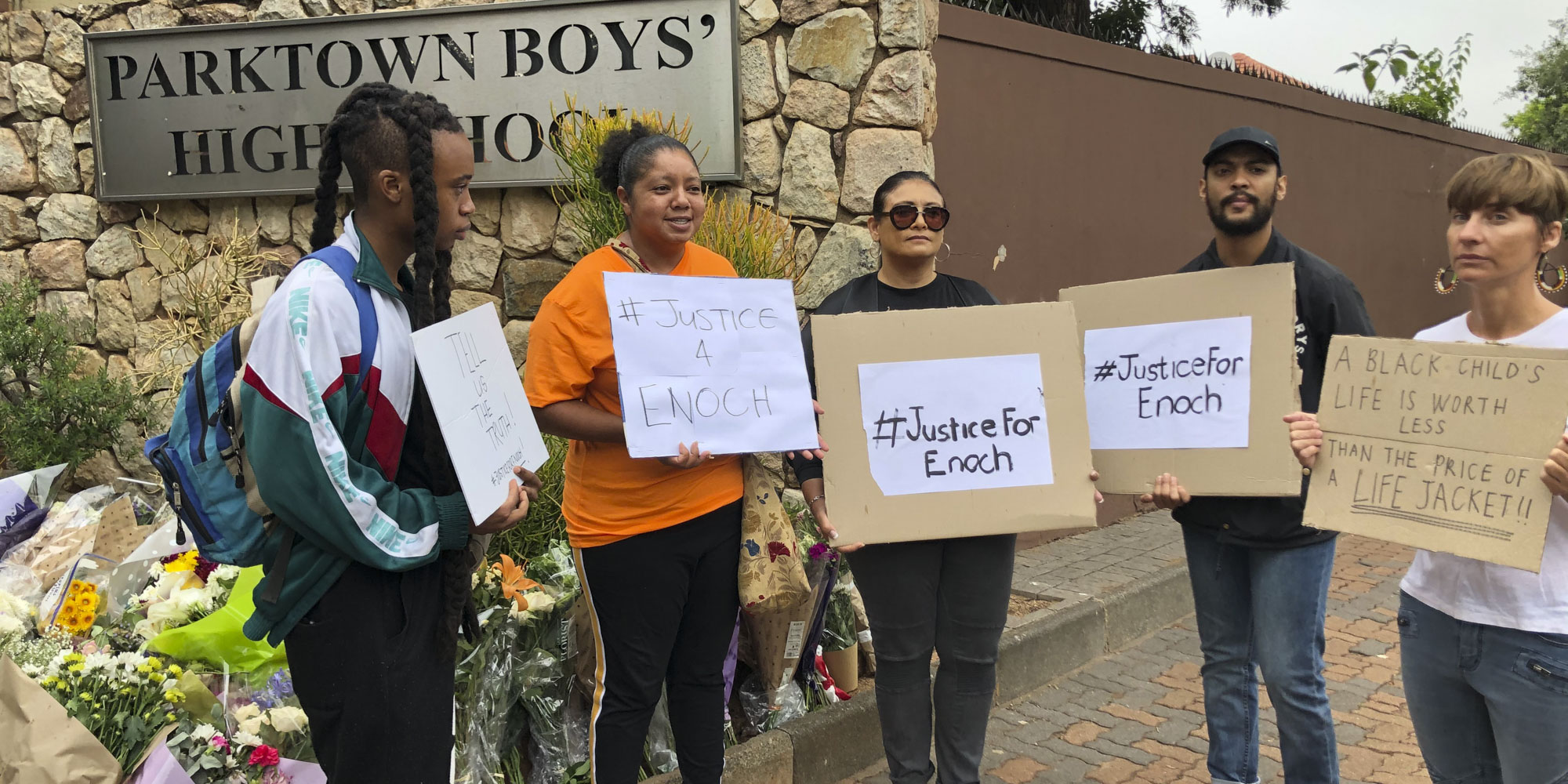 Despite multiple investigations being launched, there are several unanswered questions pertaining to the details surrounding his death.

This had led to the SA Human Rights Commission (SAHRC) offering assistance to the family of Enoch to take legal action against the Gauteng Department of Education and camp authorities.

Vanita Daniels attended the protest as a concerned citizen who believed that the school did not handle the incident appropriately. “The principal and the teachers who were at the camp need to be suspended while we all wait for the investigation to happen,” Daniels said. “The camp also needs to close down.”

Daniels added that due to the “culture of silence” that has been created, she does believe that the school is trying to cover something up.

“This whole thing smacks of a conspiracy and coverup,” Daniels said. “That’s what happens when you cloud yourself in silence… your actions are suspicious.”

Daniels has vowed to go to the main entrance of the school every day until there is justice for Enoch.

“I’m not going to let this go. I’ll be here every day at seven o’clock with my solidarity little placard until we have some answers.” DM