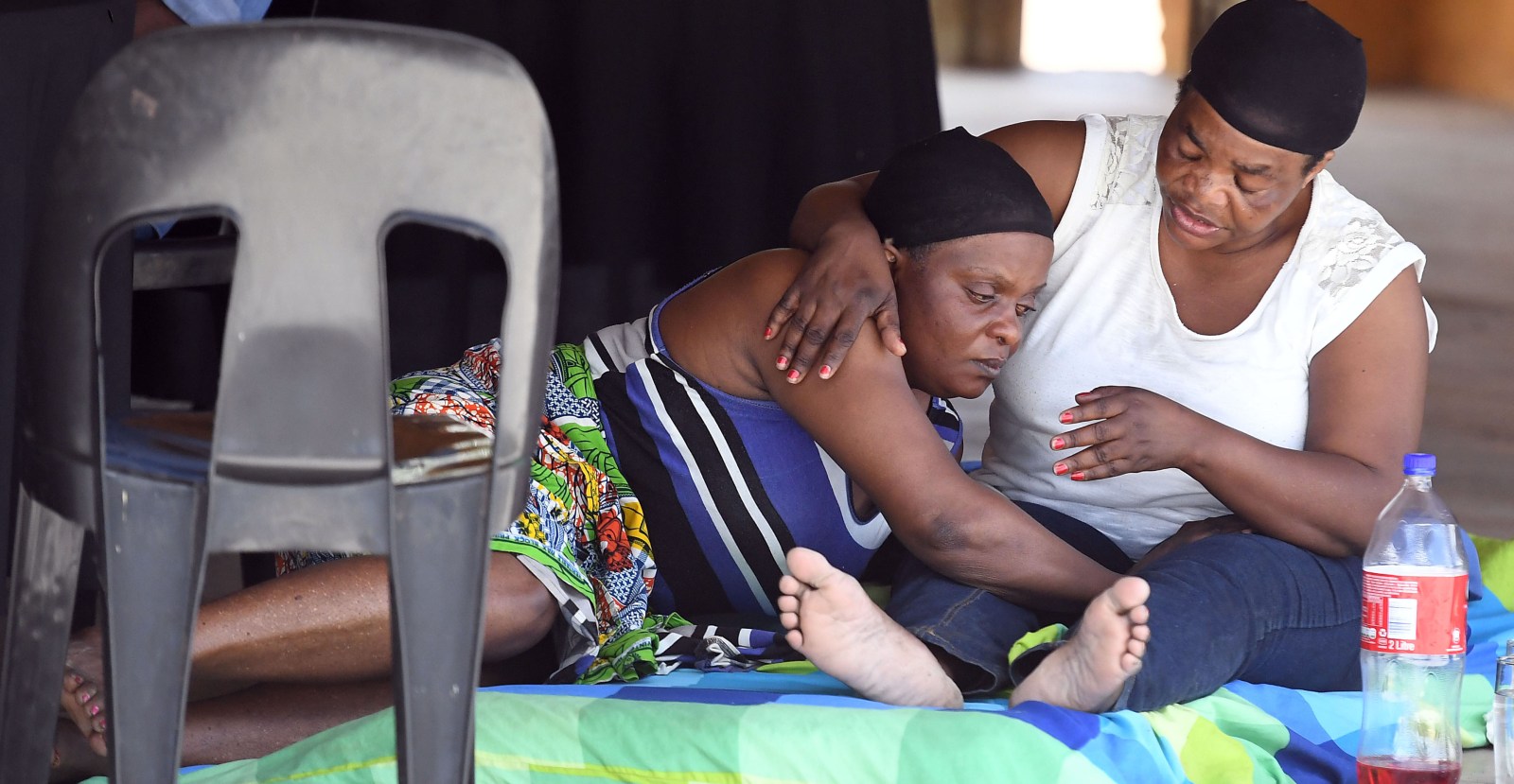 Anto Mpianzi (left), the mother of Parktown Boys High School pupil Enoch Mpianzi who drowned at Nyati lodge outside Brits in North West on 15 January 2020 is comforted by Mrs Kodiemoka after hearing of her son’s death. Photo: Felix Dlangamandla

While Education Department officials visited the family of Enoch Mpianzi on Monday 20 January, the Human Rights Commission revealed that it was in discussion with the family around their legal options and was prepared to file a civil suit against the department and camp officials for their role in the death of 13-year-old Enoch last week.

Enoch was on a Grade 8 orientation camp held by Parktown Boys High School at the Nyati Bush and River Breakaway in Brits, North West when he went missing on Wednesday 15 January during a “water activity”.

Enoch and the other boys were required to build a raft and sail it across the river. During the activity, their makeshift craft capsized.

Mpianzi, who was reportedly not wearing a life jacket or helmet, did not surface. Several parents of learners who were at the camp told Radio 702 on Monday morning that their sons had informed them that none of the pupils on the raft had life-jackets. The reports come after Enoch’s uncle, Sebastien Kodie Motha, told Sunday Times that parents were asked to pay for life jackets.

“We didn’t have money for that. It was for them [school staff and organisers] to decide if he could participate, because it is them who took them to the site,” Sebastien Kodie Motha told the publication.

Despite Mpianzi being on the raft with other boys, Parktown Boys’ High only released a statement several hours after Mpianzi’s disappearance in the early hours of Thursday morning, 16 January. And it was only on Friday 17 January that Gauteng MEC for Education Panyaza Lesufi confirmed that Mpianzi had drowned and his body had been found.

Mpianzi’s death has raised many unanswered questions. It was with this in mind that the SAHRC decided to intervene.

Buang Jones, the commission’s acting legal head, told Daily Maverick that the organisation will represent the family in legal discussions with the education and camp authorities, and if need be will file a civil suit against them on the family’s behalf.

“It is emotional harm,” Jones said. “There is pain and suffering.”

According to Jones, Mpianzi’s family welcomed the offer from SAHRC as they could not afford the legal support themselves.

“They were very grateful,” Jones said. “This is a family of asylum seekers so they can’t afford any legal support.”

Enoch is one of two Gauteng learners who have died under questionable circumstances while under the supervision of school officials.

Keamohetswe Seboko,12, a pupil and hostel border at Laerskool Bekker in Magaliesburg, drowned at the hostel’s pool on Wednesday 15 January.

The child’s mother told SABC News that she was very confused by her son’s death as she believed he was a very “capable swimmer”. Keamohetswe was found with several bruises and was naked.

“There’s no way he could have drowned,” Seboko’s mother said. “And the bruises that he had, how does somebody have bruises to his left leg and his back?”

Basic Education Minister Angie Motshekga said in a statement on Monday 20 January that she will be sending a team of officials from the School Safety unit at the Department of Basic Education to support and collaborate with the Gauteng Department of Education in the investigations being conducted.

“The team will also assist in ensuring that the affected families are supported in these difficult times.”

Motshekga has appealed to the public to be patient while investigations into both cases are being conducted.

“We also appeal for patience and urge members of the public to refrain from speculating,” Motshekga said. DM