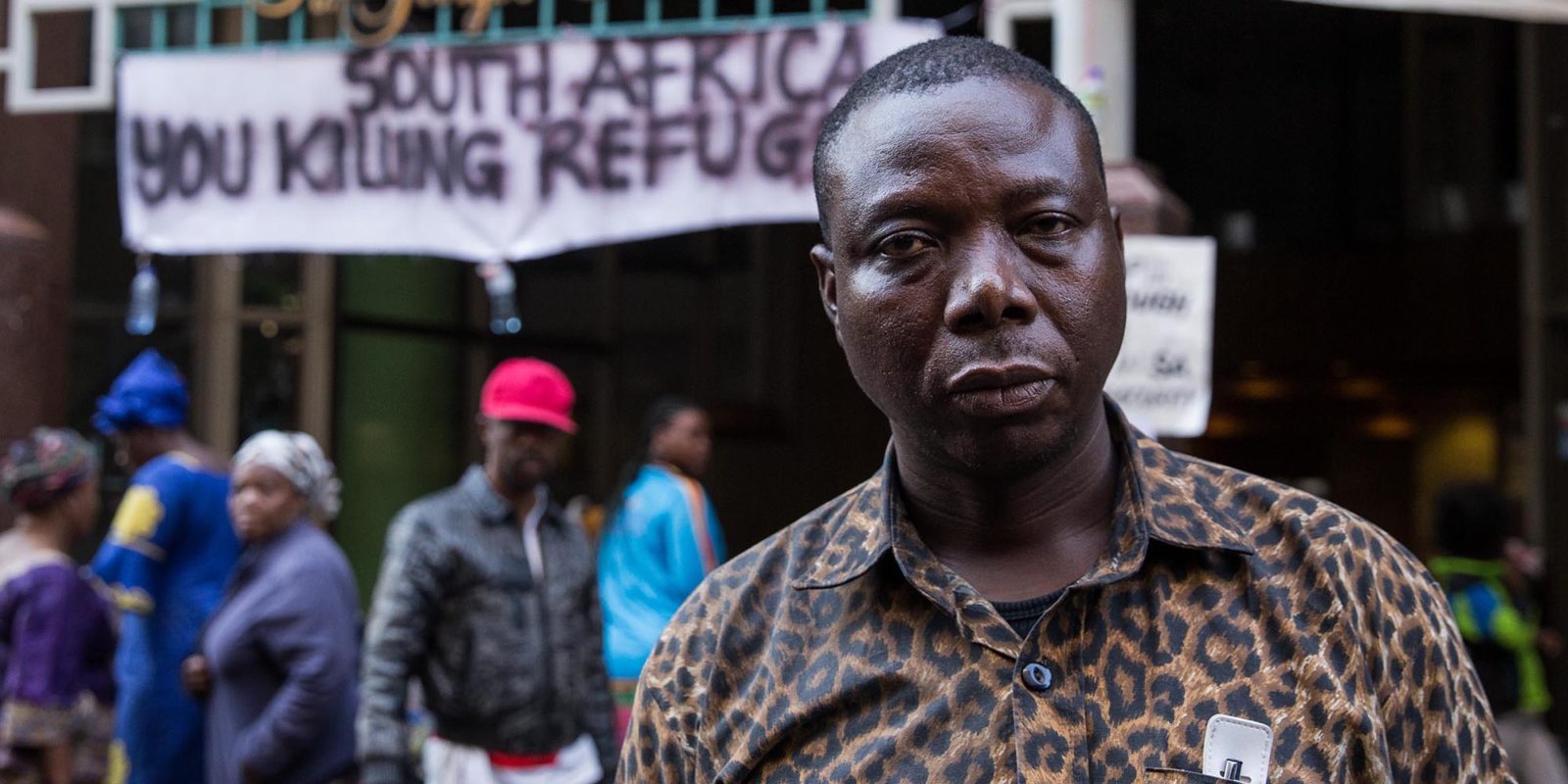 Archive Photo: Congolese refugee JP Balous has been leading the sit-in at the UNHCR office and the Central Methodist Church in Cape Town, 18 October 2019. (Photo: GroundUp)

A day after rival refugee leader Papy Sukami was released on bail, Jean-Pierre Balous received a similar reprieve when he was granted R2,000 bail and released from police custody. Both men have been restricted from re-entering the CBD, leaving their factions dwelling at the Methodist Church without ‘leadership’.

Refugee leader Jean-Pierre ‘JP’ Balous was released on R2,000 bail after a brief appearance at the Cape Town Magistrate’s Court on Friday 10 January, where he was represented by advocate Lorenzo Lupin.

Balous is part of the group of displaced migrants who have taken residence in the Central Methodist Mission on Greenmarket Square. He was arrested on New Year’s Day and faced eight charges which included: one for robbery, two for common assault, and five for assault with the intent to do grievous bodily harm.

Balous was initially granted R5,000 bail. It was reduced to R2,000 after it was argued that he could not afford the bail amount.

His first appearance was on 3 January when his case was postponed pending today’s bail application.

The embattled ‘leader’s’ release follows that of his rival Papy Sukami, the day before. Both men were given similar bail conditions. Balous, like Sukami, is restricted from entering the Cape Town CBD unless given permission to do so by his investigating officer, but only to go to Home Affairs.

As a result, Balous can no longer live at the Methodist Church; instead, he has a residence in Parow where he will be staying.

Outside court, a group of his supporters had gathered, including his wife Aline Bukuru, who had been a part of the group of displaced migrants protesting outside the UNHCR offices in Pretoria.

Some held banners which read “JP is not criminal” and “JP must be free to save refugee life”.

He exited the court and was rushed into a vehicle which drove to the Central Methodist as his supporters followed. He was met by loud cheers and mobbed as he entered the church for a meeting. It was yet another hero’s welcome.

Daily Maverick was unable to obtain comment from Balous, as upon exiting the church (after an hour) he was swiftly escorted into another vehicle which sped away.

A few law enforcement and metro police officers stood nearby.

Balous is meant to represent the displaced migrants in a court case with the City of Cape Town on 22 January, regarding an interdict application brought by the City against the group which has been allegedly infringing by-laws, and disrupting business in and around Greenmarket Square.

It is unclear whether he will be allowed to continue representing the group.

Balous is due to reappear in court on 13 March – the same date as Sukami.

Meanwhile, the hostility between the two factions is clear. JP’s cohorts live inside the church, while Sukami’s followers have been banished outside.

On Friday morning, Daily Maverick witnessed a police officer confiscating what looked like a chef’s knife from a young man who had emerged from the church and approached a group of Somalians sitting on the steps near Food Lover’s Market.

Many of Sukami’s supporters had kept their distance from the crowd when JP arrived at the church.

On Longmarket and Burg streets there remain tents wherein members of Sukami’s faction are living. The conditions are poor, with strong smell of urine and faeces, but many continue to cook and sleep there.

Meanwhile, in an update on the Central Methodist Mission’s blog on Friday, Reverend Alan Storey said that Sunday Services could no longer take place at the church due to the ongoing conflict between the leaders and the health and safety risks in the church: “Until further notice CMM’s Sunday services will be held at the Observatory Methodist Church at 10am.” DM