City of Cape Town vs Refugees: A tussle between human rights and ‘rule of law’ 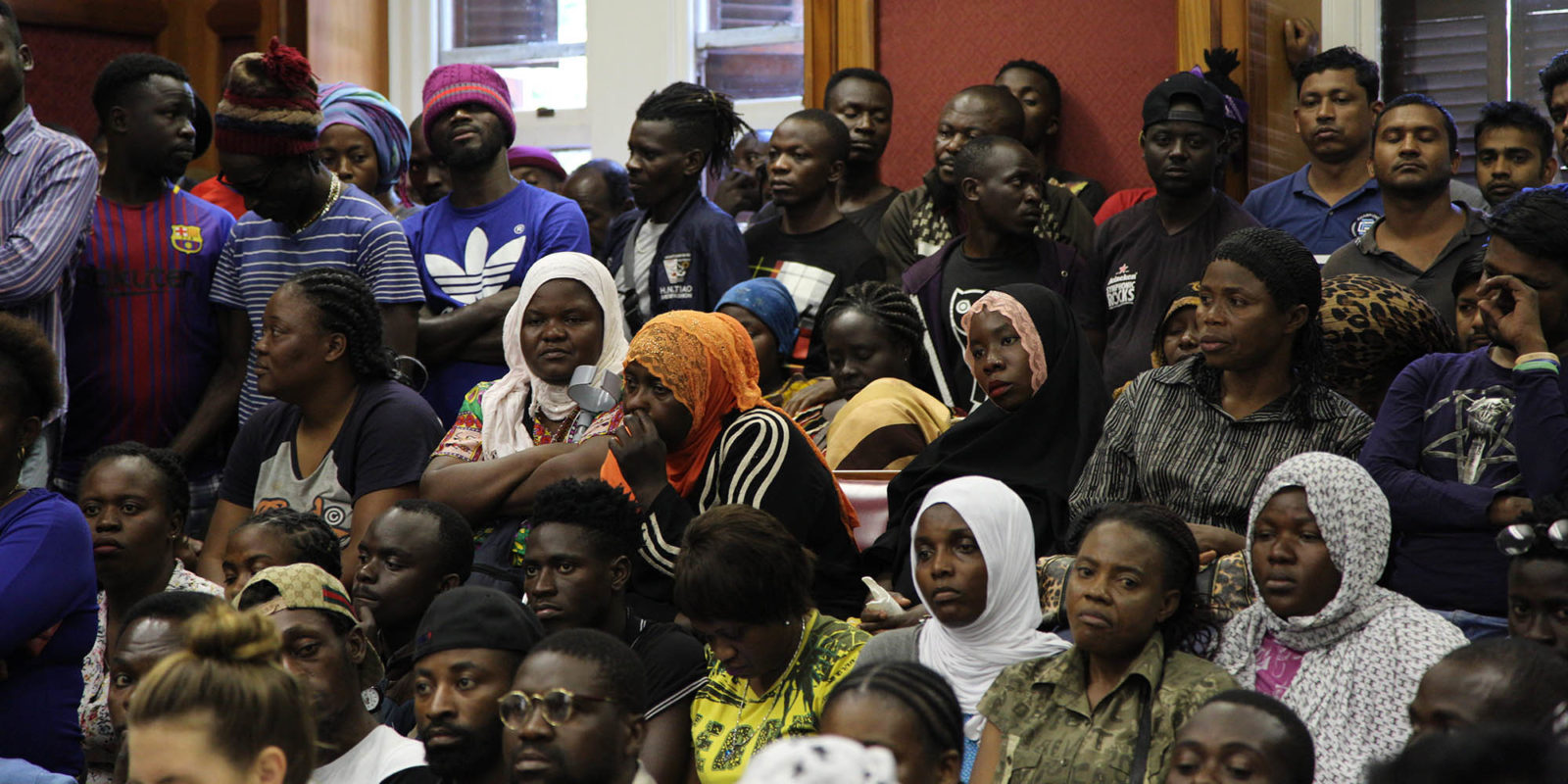 Refugees and asylum seekers wait anxiously to hear whether they will be forced to leave the Central Methodist Church in Cape Town on 13 December. (Photo: Sandisiwe Shoba)

Displaced migrants will spend an unhappy Christmas at the Central Methodist Mission in Cape Town. This is after negotiations with the city for alternative accommodation reached an impasse on Friday, 13 December. The courts refrained from granting an order to prevent the migrants from contravening by-laws, saying the city had to ensure their human rights were upheld first.

Judge Kate Savage was “most dissatisfied” when negotiations to resolve the refugee crisis at the Central Methodist Church in Greenmarket Square came to nought.

The matter was heard at the Western Cape High Court on Friday, 13 December after being postponed from 9 December when Judge Savage ordered that two meetings be held between the City of Cape Town, the Department of Home Affairs, the South African Police Service and representatives from the displaced migrants in order to reach an “amicable solution”.

Unfortunately, by Friday morning a deadlock had been reached between the parties. The refugees were hauled to court after the City of Cape Town applied for an urgent interdict against the group, prohibiting them from conducting a sit-in protest, damaging property and contravening the city’s by-laws.

According to the notice of motion, the group have been: cooking, making fires, washing clothes, conducting ablutions as well as urinating and defecating in public spaces surrounding the church.

Judge Savage contended that if the city wanted to stop the group from performing the above acts in public, they had to provide facilities in which they could do such.

Advocate Adiel Nacerodien, for the city, told Judge Savage that the displaced migrants were exercising their right to protest and therefore did not qualify for emergency housing, according to the housing code which cites: homelessness, emergency situations such as a fire or flood and eviction as plausible factors.

The city also alleged that members of the group had “intimidated” and “harassed” city officials as well as traders and businesses in and around Greenmarket Square.

On 9 December, refugee leader Jean-Pierre “JP” Balous had welcomed the possibility for alternative accommodation. He expressed the same wish during Friday’s appearance:

“We don’t [object] to being placed somewhere else,” said Balous. “I don’t like the way children are living in the church. There is no oxygen,” he continued, adding that the church had become a fire hazard.

According to advocate Seth Nthai, representing home affairs, the department conducted a count and found that 268 children are living at the church. They are between the ages of 1 month and 17-years-old.

Nthai was “surprised” by the City of Cape Town’s stance to refuse alternative facilities and argued that it had a “Constitutional and legislative responsibility to do so”.

“The city has flouted the right to human dignity,” he said, adding that the church was an unhealthy and unsafe environment.

He said home affairs was ready and willing to conduct status determination for the displaced migrants, but needed a suitable location to conduct the process.

“It is not practically possible with the facilities we have,” he argued, saying the department would deploy staff from Pretoria to help speed up the process should facilities be made available.

Balous told the court that approximately 500 displaced migrants were living in the church, 90 of which are undocumented, 68 were asylum seekers who had lost their papers and the rest were children.

Nacerodien had said the city was not responsible for what he called a “refugee issue”. “It should be dealt with by the Department of Home Affairs.”

Judge Savage reminded Nacerodien that the city had approached the court for the interdict: “I find it difficult to understand how it’s a home affairs problem.”

Judge Savage accused the city of using the interdict application as a “backdoor” approach to getting an eviction order.

She argued that the relief sought by the city would create unlivable conditions for the refugees who would then be forced to move: “The city has provided no provisions for ablutions or cooking. You cannot live if you do not ablute or eat,” said Savage.

Nacerodien responded saying the city’s application was never an intention to create an eviction but was simply “an upholding of the rule of law”.

The court adjourned briefly to allow Nacerodien to consult with the city. Upon resuming, he told the court that accommodation was not available for 600 people.

He had no report back on whether ablutions could be provided and regarding food, he suggested that Gift of the Givers be invited back to the church to provide aid. This is after they withdrew from the church in early November 2019 after butting heads with the refugee leaders.

To Judge Savage’s dismay, Nacerodien requested the matter be postponed to a later date, for fear that a ruling may result in the city being held in contempt of court orders. Balous was asked if he wanted to file responding papers to allegations of intimidation and harassment made by the city. He agreed.

The case was postponed to 22 January 2020 and Balous must file responding papers by 27 December. DM