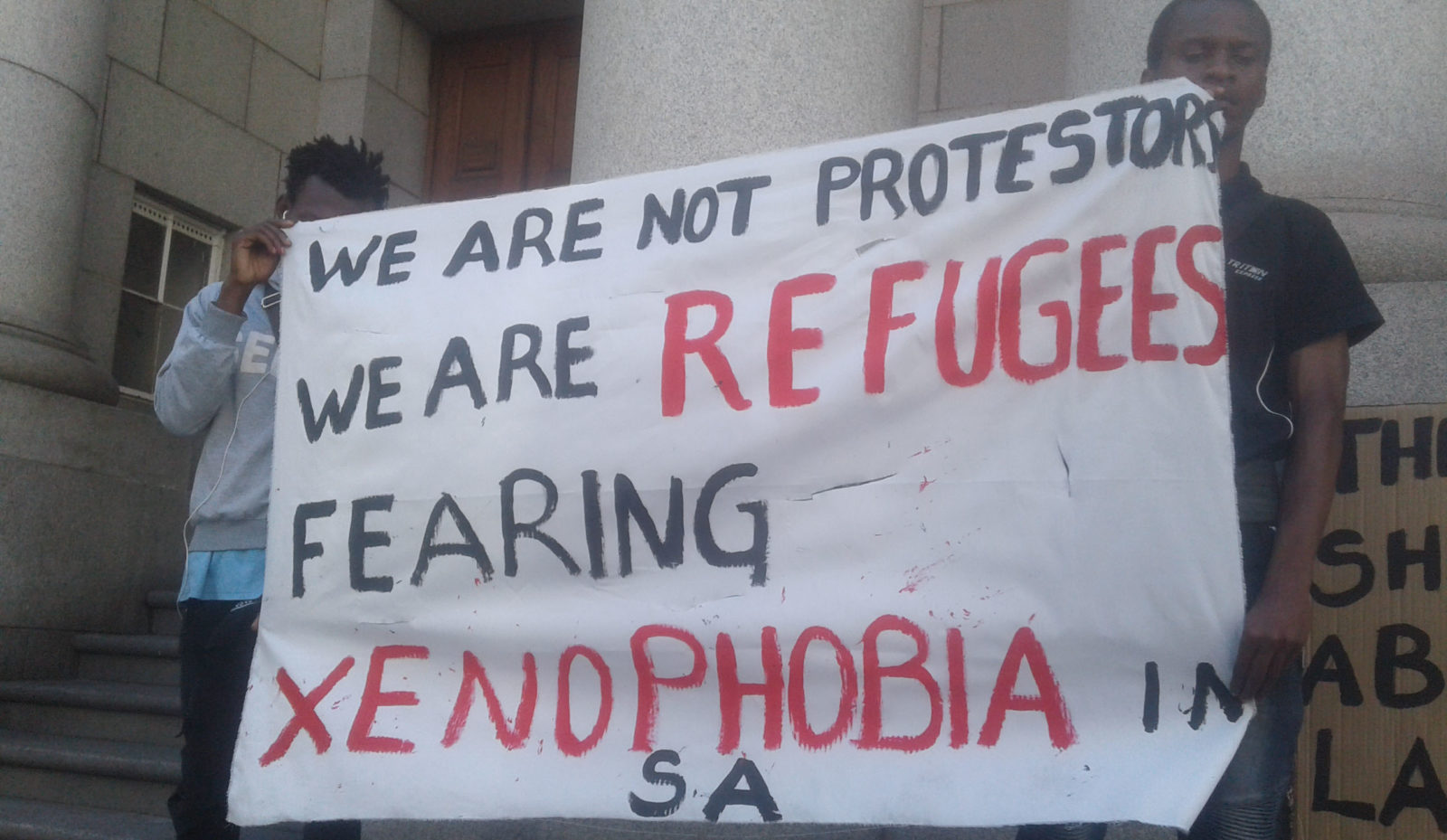 Refugees camping in and around the Central Methodist Church in Cape Town appeared at the Cape Town High Court on Monday 9 December. The City of Cape Town applied for an urgent interdict to remove the group of around 600 refugees who've been living at the church for over a month. Photo: Sandisiwe Shoba

Displaced migrants who’ve been camping at the Central Methodist Church for over a month have been hauled to court by the City of Cape Town for contravening the city's by-laws. With yet another eviction on the table, Judge Kate Savage has called for a peaceful solution to the crisis, citing safety concerns for the women and children living in the crowded church.

Representatives of the displaced migrants living in and around the Central Methodist Church in Greenmarket Square appeared at the Cape Town High Court on Monday after the City of Cape Town applied for an urgent interdict to evacuate them from the church and its surrounds.

The other respondents in the matter were the Department of Home Affairs (DHA) and the South African Police Service (SAPS).

The courtroom was packed with roughly 100 of the 600 or more people who have been living at the Methodist Church for over a month. Reverend Alan Storey had opened the doors of the church after the group was forcibly removed from outside the Cape Town UNHCR offices in Waldorf Arcade, where they had been demanding to be resettled to a third safe country.

The City of Cape Town, represented by advocate Con Joubert, argued that the refugees who have been cooking, lighting fires and sleeping on the two adjacent streets outside the methodist church, were in contravention of the Streets, Public Places and the Prevention of Noise Nuisances by-law. The same by-law that caused a stir earlier this year, when it was used to fine street dwellers.

Joubert also alleged that the city had received complaints from hawkers and businesses in and around Greenmarket Square who had lost customers due to the sit-in.

“One hotel is losing R50,000 a day because tourists are being turned away,” Joubert contended.

Refugee leader Jean-Pierre “JP” Balous who represented the group, disputed this allegation, arguing instead that the city was “uncaring” in the way it had dealt with the displaced migrants.

He said, the summons which was served on 2 December, came while the community was still mourning the death of three teenagers who drowned at Rocklands Beach in Sea Point on 24 November.

The teenagers were buried at Maitland cemetery on Friday, 6 December.

Regarding undocumented migrants at the church, Advocate Seth Nthai, representing the DHA, said the Department had “no issue” verifying documentation. The same had apparently been done for refugees camping outside the UNHCR offices in Waterkloof, Pretoria.

In that case, “there were around 624 migrants, we found that 65 were undocumented. They were immediately given Section 24 (refugee) permits,” said Nthai.

For refugees in Pretoria, things turned violent when they clashed with police outside the UNHCR offices where they had been camping. An order was given on November 14 to vacate the area in three days. To escape eviction, protesters scaled the wall of the UNHCR offices. Police forcibly removed them the next day.

Presiding over the City of Cape Town’s application on Monday, Judge Kate Savage urged the parties to reach an “amicable solution” other than eviction, citing concerns over the safety of the women and children living in the church’s unfavourable conditions.

Nthai supported the proposal as well as advocate Renata Williams who was representing SAPS.

Joubert, however, still sought interim relief for the city, further arguing that refugees had harassed business staff and customers in the area.

Judge Savage said she could not grant “piecemeal relief”.

In an update published on the Central Methodist Mission website, Reverend Alan Storey said the refugees had agreed to leave the church by Thursday this week:

“The leaders announced this morning (5 December) to me and to those present in the Church, that they will vacate CMM by the 12th December. For all the reasons stated in my previous updates, I do hope this commitment is honoured.”

Storey had previously said that the church was a fire-risk and had inadequate toilet facilities for the number of people dwelling in the building.

The case was postponed to Friday, 13 December. Judge Savage ordered that the city, DHA and SAPS hold meetings in “good-faith” on Tuesday and Thursday to secure a resolution to the occupation in and around the church. She requested reports be filed on the outcome of discussions before proceedings resume on Friday.

He said refugees wanted to leave the church but in the “right way” and had abandoned all plans to walk to Namibia. DM