UNHCR urges refugees to stay in South Africa, despite their circumstances 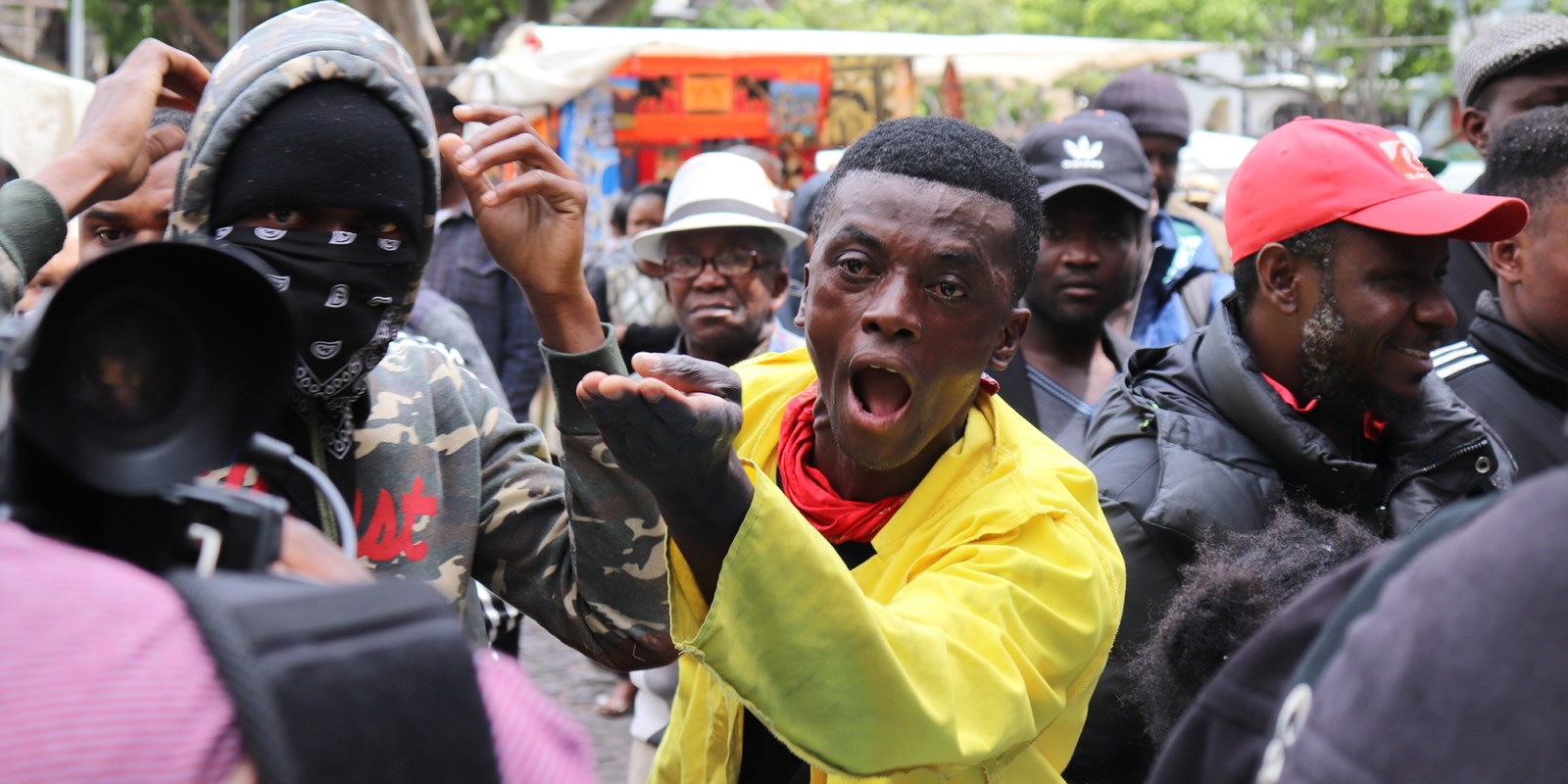 Refugee anger has boiled over in recent weeks. Many complain of xenophobic attacks and improper treatment by the police. (Photo: Noah Tobias)

Protesting refugees in Cape Town and Pretoria are still adamant that they want to leave SA for a country where they will feel ‘safe’. The UNHCR insists that mass resettlement is not possible and has offered to repatriate refugees to their home countries — but is urging refugees to stay in South Africa.

It’s been a week since migrants and refugees were forcibly removed from the UNHCR offices at the Waldorf Arcade in Cape Town after staging a sit-in that began in early October.

Their demands were to be repatriated to a third country where they could feel “safe” after the most recent wave of xenophobic attacks.

Hundreds are now seeking refuge at the Central Methodist Church on Cape Town’s Greenmarket Square, where they are receiving food and medical care amid cramped and sweaty conditions.

Meanwhile, more than 400 people are still camped outside the UN Refugee Agency in Waterkloof, Pretoria and on Wednesday 6 November the Pretoria High Court postponed an urgent application by two homeowners’ associations to have the protesters immediately removed.

Amid all of this, the UNHCR has called for protesters who have residences in South Africa to “return home”.

“For the refugees who have accommodation to go back to in Pretoria, Johannesburg, Cape Town or elsewhere in South Africa, we strongly urge them to peacefully return home,” said Hélène Caux, senior communications officer for the UNHCR Regional Bureau for Southern Africa.

The displaced persons camping outside the Pretoria offices have minimal access to sanitation and are exposed to elements such as wind, rain and heat which, Caux says, cannot be good for their well-being.

“This is not a set-up to which parents should be exposing their children,” wrote Caux in an email response to Daily Maverick, pleading that the school-going children in their midst be allowed to return to their studies.

“Some are enrolled to take exams soon and it is important that their education is not interrupted.”

But commissioner Chris Nissen from the SA Human Rights Commission acknowledged that many of the protesting refugees were still at risk if they returned to their communities.

“It’s perhaps an opportunistic minority that seeks to fulfil a criminal or other intent.”

Department of Home Affairs (DHA) ministerial spokesperson Siyabulela Qoza said DHA officials had met with protesters when they first gathered outside the UNHCR offices in Pretoria:

“They told us that the issues they were dealing with did not require home affairs assistance,” he said, adding that they had tried to meet with the group in Cape Town on the day they were evicted but the protesters refused.

“We are not in a position to go beyond that, but we are ready to assist should they come to us. Our doors are open.”

On October 21, the SAHRC, led by commissioner Angie Makwetla, held a meeting at the UNHCR offices in Pretoria (Cape Town was included) with representatives from DHA, SAPS, the Tshwane mayor’s office, Lawyers for Human Rights and other stakeholders to discuss resolutions to the refugee crisis. A proposal was finalised and presented to protesters in both cities, which stated three possibilities:

The UNHCR also offered to assist those who would like to return to their home countries. However, the above offers were rejected. Resettlement was the only option protesters would accept.

But Caux reiterated that this is nearly impossible as it depends on many complex factors, including the resettlement countries’ willingness to take in refugees, the number of places available in those countries and the fact that mass repatriation is impossible, it can only be done on a case-by-case basis.

“To put things in context, there are around 26 million refugees and asylum-seekers worldwide and this number is increasing every year. Only up to 1% of the refugee population worldwide will have a chance of being resettled every year. For South Africa, in 2019, we have a quota of 700 places which is already mostly filled.”

She says this has been clearly explained to those displaced, including by UNHCR High Commissioner Filippo Grandi, who visited South Africa from 14-16 October.

Under the UN Refugee Convention, the government should afford migrants basic human rights such as access to courts, healthcare and basic education, protect them from discrimination and issue relevant documentation.

South Africa has more than 268,000 refugees and asylum seekers within its borders, and the UNHCR has said it is a “generous host country,” with some of the most progressive asylum policies and laws in the world.

However, migrants who have been survivors of xenophobic violence and are still battling with ongoing documentation issues would probably disagree.

Daily Maverick previously reported there was a backlog of more than 184,976 active asylum seekers awaiting their status determination as refugees. Some have remained asylum seekers for more than a decade. Many of the refugees camped out at the Central Methodist Church have spent years in limbo, and complain of their lack of proper papers and subsequent inability to work.

Coupled with this, the DHA shut down the Refugee Reception Centre in Cape Town and despite a court order to reopen the centre by 31 March 2018, it remains closed. Promises were made that it would be reopened in January 2020.

Xenophobic statements by leaders including outgoing Joburg mayor Herman Mashaba, Zulu King Goodwill Zwelithini and even the Minister of Home Affairs, Aaron Motsoaledi, have not helped the already precarious position in which migrants find themselves.

Motsoaledi, in a recent address to the parliamentary portfolio committee, made troubling statements which included questioning why there was an influx of African asylum seekers when, in his view, there are no conflicts on the continent, and blamed the SABC for broadcasting negative news on the state of the asylum-seeker system.

Qoza said the asylum-seeker management system was only designed to deal with approximately 50,000 people a year.

But Nissen said home affairs should acknowledge it is facing a crisis and deal with it accordingly, as “extraordinary circumstances require extraordinary measures”.

Qoza also said that for many of those who were denied refugee status, it was on the grounds that they could not prove they were being persecuted in their countries of origin.

“If you cannot prove that you are persecuted in your own country because of religious, political or gender grounds then there is no requirement for South Africa to grant you status. It is the law, it is the rule that is applicable to every nation that is a part of the United Nations Convention.

“For example, last year 18,000 people applied for asylum. We only approved 1,500 people because only those people could give us proof that they were being persecuted.”

According to the Refugees Act, people qualify for refugee status if he or she has a “well-founded fear of being persecuted by reason of his or her race, tribe, religion, nationality, political opinion or membership of a particular social group, is outside the country of his or her nationality and is unable or unwilling to avail himself or herself of the protection of that country”.

He emphasised that refugees had to prove on an individual basis that they were being specifically targeted by, for example compiling newspaper clippings in desperate cases.

Many asylum seekers find it difficult to provide adequate proof.

“I fled my country in a boat,” explained Congolese refugee Binyanga Souzy. “I had no papers, no family, no nothing.”

Qoza also postulated that many migrants who came seeking refuge around 2004 were possibly economic migrants, as this period coincided with a global recession.

“If that is the case, then the system has been abused.”

Caux says the UNHCR is working on developing social cohesion programmes to support the inclusion of refugees into South African society.

“For instance, we have been strengthening our outreach community activities through our partners by providing assistance and counselling to communities that have been impacted by the recent violence against foreign nationals,” she said.

“Our partners are also ready to provide social and cash-based assistance to individuals and families in need in Pretoria and Cape Town, after an assessment of their situation.”

For the time being, Central Methodist is not raising any funds on behalf of its refugees, according to a statement released by the Rev Alan Storey.

“As we offer solidarity and support,” he wrote, “we must respect people enough to carry the struggles of their own lives.” DM