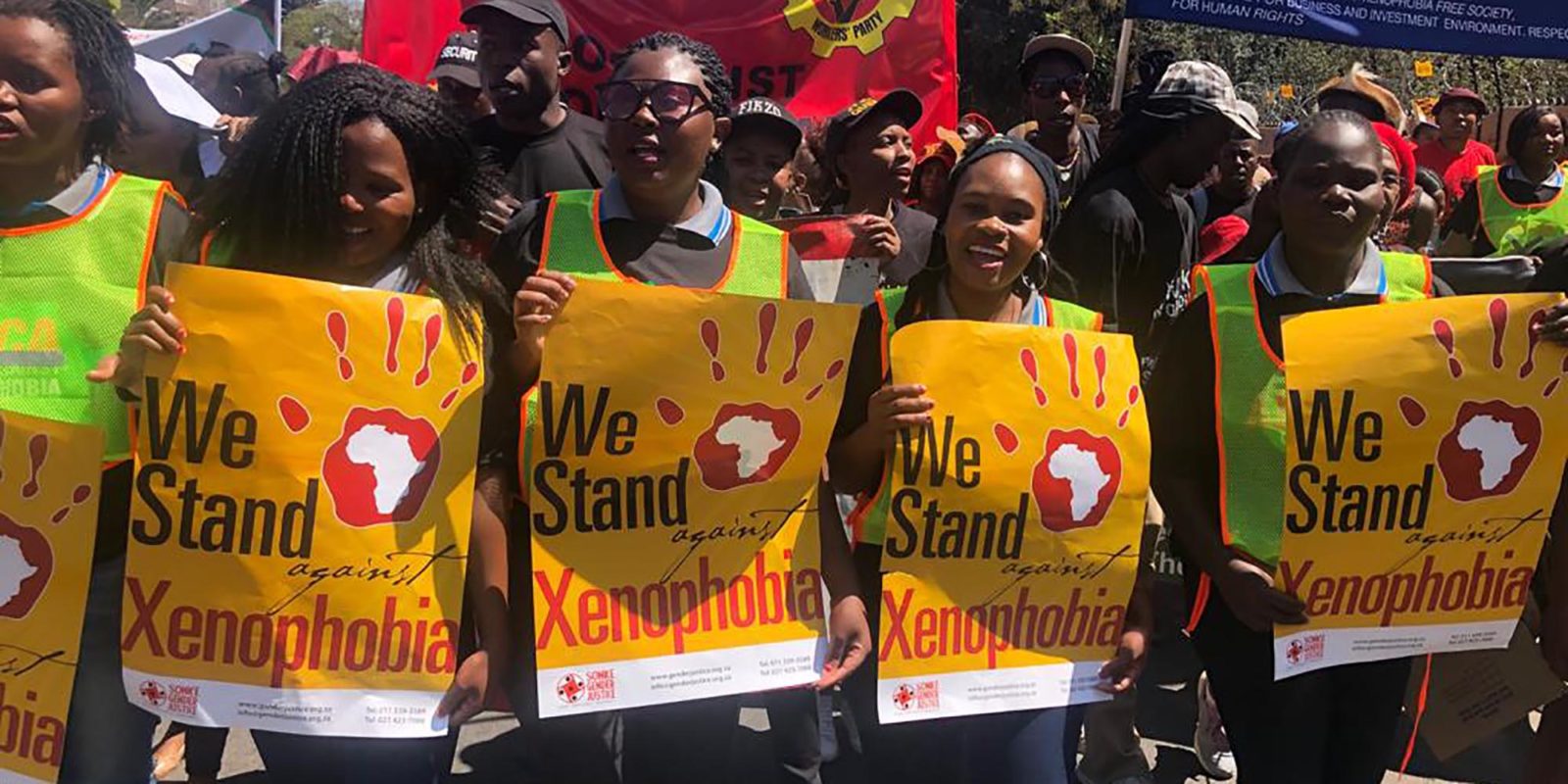 Johannesburg residents hold up placards to show support for people who were victims of the September 2019 xenophobic violence in the city. (Photo: Lesedi Rudolph)

President Cyril Ramaphosa has recently made a welcome commitment to take measures to prevent a recurrence of deadly xenophobia and to ensure that South Africans and our neighbouring states act lawfully in addressing the migration crisis. One person he should talk to is his Minister of Home Affairs, Dr Aaron Motsoaledi.

In a recent address to the parliamentary portfolio committee on the performance of the Department of Home Affairs, Minister Aaron Motsoaledi made several disturbing comments — indicating a worrying lack of understanding of the core mandate of the department as the custodian of refugee protection in South Africa.

In his diatribe against asylum seekers, Motsoaledi questioned why there are so many African asylum seekers when, in his view, there are no conflicts on the continent. He also complained about the negative media reporting on the dismal state of the asylum system, claiming the SABC was harassing department officials about corruption and inefficiencies at the refugee reception office in Pretoria.

Perhaps most worrying was Motsoaledi’s criticism of the South African courts’ rulings to prevent the unlawful return of people to countries where they face persecution and to allow asylum seekers to work and operate businesses while waiting for the department to determine their refugee claims.

The minister said international judges had “slammed the lackadaisical” approach that South African courts take toward non-nationals at a recent conference of the International Association of Refugee and Migration Judges, that took place in Cape Town in September 2019. This statement is ill-informed and misrepresents the sentiment and spirit of the conference. No such statements were made during the conference. The very purpose of the conference was to discuss how forced displacement within the African continent is being addressed through progressive legislative changes and the application of international legal standards and the emergence of progressive refugee status determination systems.

A foundational principle of the 1969 Convention is the commitment of nations to share the responsibility in hosting refugees. However, the world’s poorest countries continue to shoulder the burden of the global refugee crisis while Europe and the US host less than 15% of the world’s refugee population.

In this regard, Motsoaledi’s unfounded statements ring very similar to that of conservative leaders such as Donald Trump and Boris Johnson, who blame refugees and immigration for all societal ills and build populist platforms on “getting tough on immigrants who are abusing their hospitality”.

South Africa is host to less than 90,000 recognised refugees and there is a backlog of more than 184,976 active asylum seekers awaiting their status determination as refugees, some who have remained asylum seekers for more than a decade.

It is a shame that in comparison, countries such as Uganda and Ethiopia host 940,800 and 791,600 refugees respectively. The annual GDP of the South African economy is almost nine times that of Uganda. Yet, Uganda is host to 90% more refugees than South Africa. So lesser-resourced countries are shouldering the responsibility of the majority of refugees forced to flee in fear of persecution or losing their lives. And yet the US, UK and SA, with a relatively small percentage of refugees and migrants, are taking a reactionary and inhumane stance.

One of the aims of the International Association of Refugee and Migration Judges conference was to ensure the proper implementation of international and regional law by broadening access to justice for refugees and migrants, taking into account the increasing numbers of people being forcibly displaced by conflict and climate change.

The international community remains ignorant of the impact of the climate crisis on forced displacement. Increasingly, people are compelled to leave their homes due to drought, flooding and other uncharacteristic changes in the climate. The number of forcibly displaced people worldwide has grown from 33.9-million in 1997 to 70-million in 2018. Statistics indicate disasters were responsible for 23.5-million new displacements in 2016, with 97% caused by weather and climate-related events.

A recent report from the World Bank estimates that sub-Saharan Africa, South Asia and Latin America combined will have to deal with more than 143-million internal climate migrants by 2050. This points towards a heightened need for law and policy that responds reasonably and with respect to people’s human rights to inevitable climate tragedies.

South Africa’s refugee legislation, as well as judgments giving effect to that legislation and our Bill of Rights, are lauded internationally for their progressive and human rights-centred approach to refugee rights. Motsoaledi’s comments show a blatant disregard for the important role the South African courts play in holding both the executive and administrative branches of government to account, and strengthening the rule of law.

The separation of powers is vital for an effective and accountable democracy and Motsoaledi’s unsubstantiated comments criticising the judiciary undermine this. Essentially, he is implying that the judiciary in a constitutional democracy must regard refugees and asylum seekers as unworthy of the constitutional guarantees of equality, freedom and human dignity.

Motsoaledi has taken over a department notorious for its corruption and ill-treatment of refugees and migrants. A series of reports by civil society and Chapter Nine institutions have exposed the corruption and institutional xenophobia that has resulted in countless asylum seekers waiting up to 15 years for their claims for protection as refugees to be adjudicated and processed.

Our concern is not just the minister’s misleading and harmful statements, but also that no one questions the accuracy of such statements, including some journalists who are also guilty of perpetuating anti-immigrant sentiment. The regurgitation of comments by politicians and leaders without requesting that information is validated, or without due analysis, further perpetuates the unsubstantiated and dangerous comments made about migration in South Africa today. Considering that much xenophobic violence is ignited by comments made by politicians and leaders, diligent journalism is of vital importance.

We urge the minister to take up an evidence-based approach to both his statements and the policy direction of his department. We urge journalists reporting on comments made by politicians to ensure adequate fact-checking is done before printing divisive and often dangerous statements.

Today’s South Africa was founded on a struggle against othering and racial discrimination in order to achieve social justice. This is why our Constitution embodies the vision of a non-racial and just society — the antithesis of our past. What is underscored in the Constitution is the values of inclusivity and accountable democracy. A vision of a non-sexist society imbued with the equal worth and dignity of all who live in South Africa.

The minister’s statements are the opposite of this.

This government has failed to put in place measures to meet its constitutional obligation to transform our society from a past which saw a capitalist apartheid regime profit through the excessive exploitation along class, race and gender lines of the majority of people who lived in South Africa. This government has a constitutional obligation to allocate resources to address the imbalances created by the apartheid regime. The need for redress and transformation is the substance of our constitution. There appears to be no political will to do this.

We as South Africans must hold our government to account for failing to improve the quality of life for the most vulnerable. At present, it appears that instead of holding the state to account, we are dangerously and gullibly believing lies and untruths, when politicians blame non-nationals for the impoverished conditions the majority of people continue to live under.

What the minister is guilty of is what right-wing conservative politicians are doing globally: blaming migrants for the government’s failures to provide decent job opportunities and eradicate poverty. Recent statistics indicate South Africa has 3.8-million immigrants — 6.9% of the total population. This excludes about 400,000 people who have been deported between 2012 and 2016.

If all migrants were deported from the country, will this resolve the systemic unemployment crisis in our country? Statistics show unprecedentedly high levels of unemployment, especially among the youth. The unemployment rate among 15-24-year-olds was 55.2% in the first quarter of 2019. Among graduates in this age group, the unemployment rate was 31% during this period.

The inequality between the rich minority and the overwhelming majority of predominantly poor black people is growing. Can we blame foreign nationals for these statistics of systemic unemployment and the everyday lived reality of so many in South Africa? There is no evidence that would support such an argument.

Transformation and redress is a constitutional obligation placed on the state, in the context of the legacy of apartheid, which has been declared a crime against humanity. This government needs to account to its citizens rather than scapegoating a vulnerable minority.

We should be calling on the government to ensure the implementation of policies and plans with necessary resources allocated to ensure transformation and redress to eradicate the socio-economic inequalities plaguing our society. Inequalities evidenced in the housing backlog, the unemployment crisis and the conditions that all too many people are living under. DM

Abigail Dawson is the communications and media officer at the Consortium for Refugees and Migrants in South Africa [CoRMSA], Sally Gandar is the head of advocacy & legal adviser at Scalabrini Centre of Cape Town and Sharon S Ekambaram is with Lawyers for Human Rights.

By Lucas Ledwaba for Mukurukuru Media