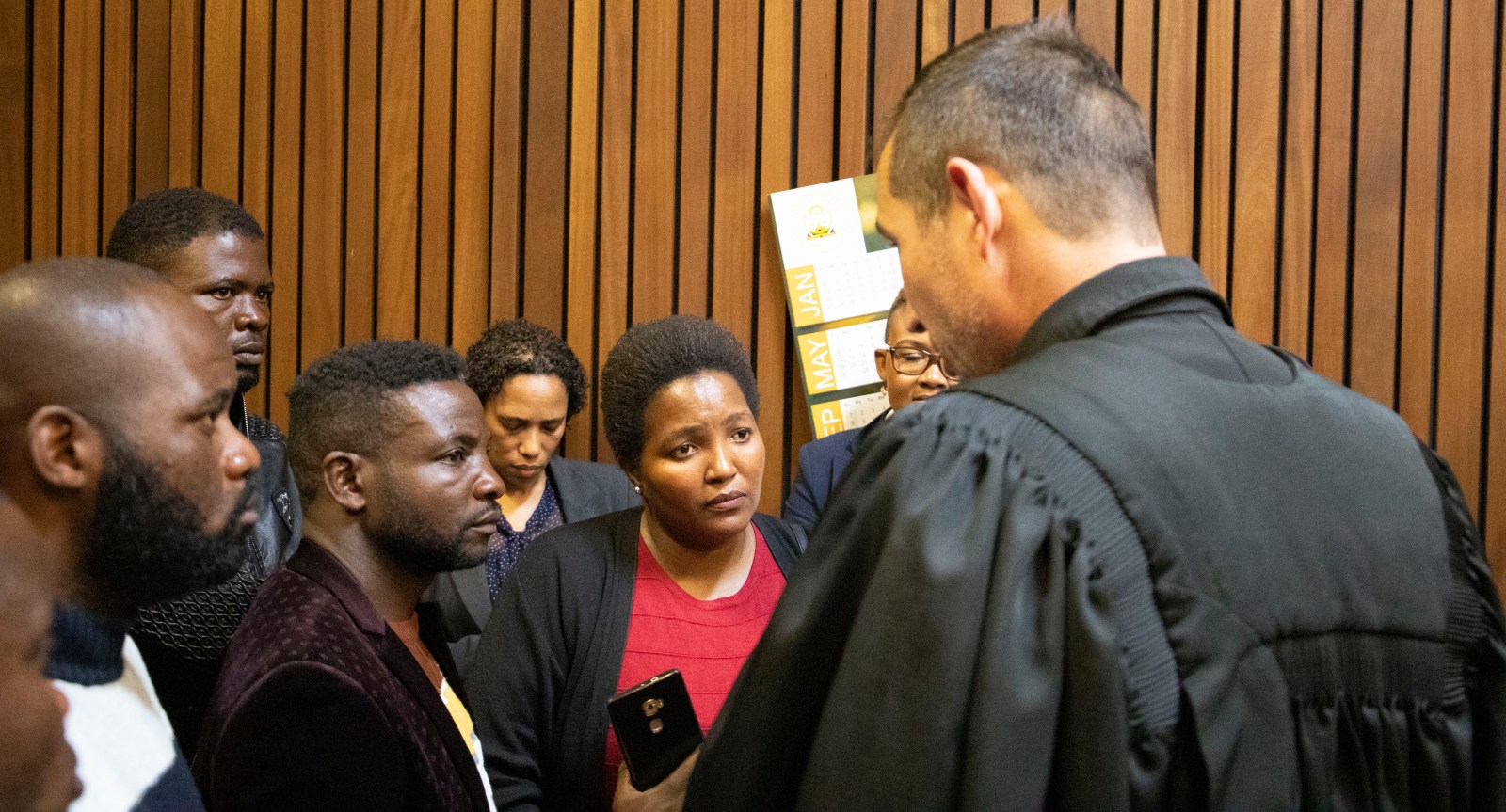 Advocate Adriaan Vorster addresses protesters after Judge Ranchod Natvarlal ordered that all refugees living in the ‘affected area’ in front of the UNHCR building in Pretoria have three days to leave. (Photo: Chanel Retief)

The Pretoria High Court has allocated three days for hundreds of foreign protesters to vacate the public Waterkloof area in Pretoria, where they have remained camped outside the United Nations High Commissioner for Refugees offices in a sit-in protest since early October.

A Pretoria High Court order directs the City of Tshwane, the Department of Home Affairs and the police to act collectively in a joint operation to identify the foreign protesters camped outside the United Nations High Commissioner for Refugees (UNHCR) offices in Pretoria and ascertain who is legally authorised to remain in South Africa. The department is thereafter ordered to apply the immigration laws of the country.

The foreign protesters remain firm in their stance to stay and have indicated to members of the court that they intend to oppose the orders made against them.

“We have to oppose the order [even if they] have granted it already. Refugees are victims and it is our right as human being[s] to stand against this violence,” said Aline Bukuru, who fled the Democratic Republic of Congo (DRC) in 2008.

On 7 October 2019, a group of refugees initiated a sit-in protest outside the United Nations High Commissioner for Refugees offices situated on the upscale, residential Waterkloof Road in Pretoria. On 13 November, more than a month later, about 600 foreign protesters remain camped in an expansive informal settlement that spans along the sidewalks, parks, public roads and road reserves of Waterkloof Road and a number of surrounding, suburban streets in the area.

The protesters say they are seeking protection and have placed themselves outside the UNHCR in a bid for the UN refugee agency to take responsibility and relocate them to a safer third-world country.

“We are running from the killing. We are risking our lives and going to the UNHCR to ask them [for help because] we don’t want to live in this country,” said Alex Mongo, who is from the DRC.

“We are there seeking protection [and] we are not abusing anybody. We are there peacefully,” said Bukuru.

On 5 November 2019, two Pretoria homeowners associations (the applicants) acting on behalf of the residents of the affected areas approached the high court for an order directing the City of Tshwane, the Minister of Home Affairs and the police to act within their statutory duties and remove the refugees in accordance with the immigration laws of South Africa.

The court was forced to postpone proceedings on two occasions when the City, the Department of Home Affairs and the police could not reach an agreement as to whose statutory responsibility it was to spearhead the operation.

Judge Ranchod Natvarlal appealed to the parties to address the issue outside of court and allocated Wednesday 13 November 2019 as the date for final hearing.

Daily Maverick coverage can be found here and here:

Argument over semantics sustained into Wednesday’s proceedings with all parties unable to agree on the desired outcome.

Natvarlal, having presided over the matter for the fourth day, would not allow any further delays and having considered all submissions, prepared to hand down his final ruling. He was prevented from doing so when Mongo, introducing himself as the spokesperson for the protesters, stood and asked to address his issues before the court.

Natvarlal informed Mongo that his attempts to be heard were not appropriate, nor within due court process and that his submissions would not be considered at that stage of proceedings.

Bukuru, who is a female leader of the protesters, made a final appeal to the judge.

“If you issue this order, they will do to us what they did to those in Cape Town,” she said.

“I do intend to make an order, but that order does not prevent you from coming back and making representations and submissions in the proper manner,” Natvarlal replied.

An order was made interdicting and prohibiting the protesters from continuing to create a nuisance for the residents of the Brooklyn, Nieuw Muckleneuk and Waterkloof suburbs and from engaging in unlawful activities that pose health and safety hazards to the City of Tshwane and its residents.

This includes erecting shelters, shacks and tents, causing unpleasant and offensive smells, dumping refuse and other materials, making fires, cooking food and washing and hanging clothing and defecating, urinating and undressing in the area.

The refugees have been ordered to vacate and disperse from the area within three days of receiving notice of the ruling, which must be affixed to principal posts within the protest area.

The court order expressly authorises the City of Tshwane Metro Police and the South African Police Services (SAPS) to arrest any protesters who transgress the law.

The protesters are provided the opportunity to oppose the court order, but such opposition must be made within 24 hours — before the end of the week.

When asked whether the protesters plan to vacate the public area, Mongo replied that they had nowhere else to go.

“They have to know that we have no other place to go. When they come to take us out of there, where are they going to put us?”

This ruling comes only a few weeks after the violent events outside the Cape Town UNHCR Offices in St George’s Mall when police were called to remove hundreds of refugees and asylum seekers camped in the area.

The refugees and asylum seekers are presently sheltered at the Central Methodist Church in Cape Town. MC