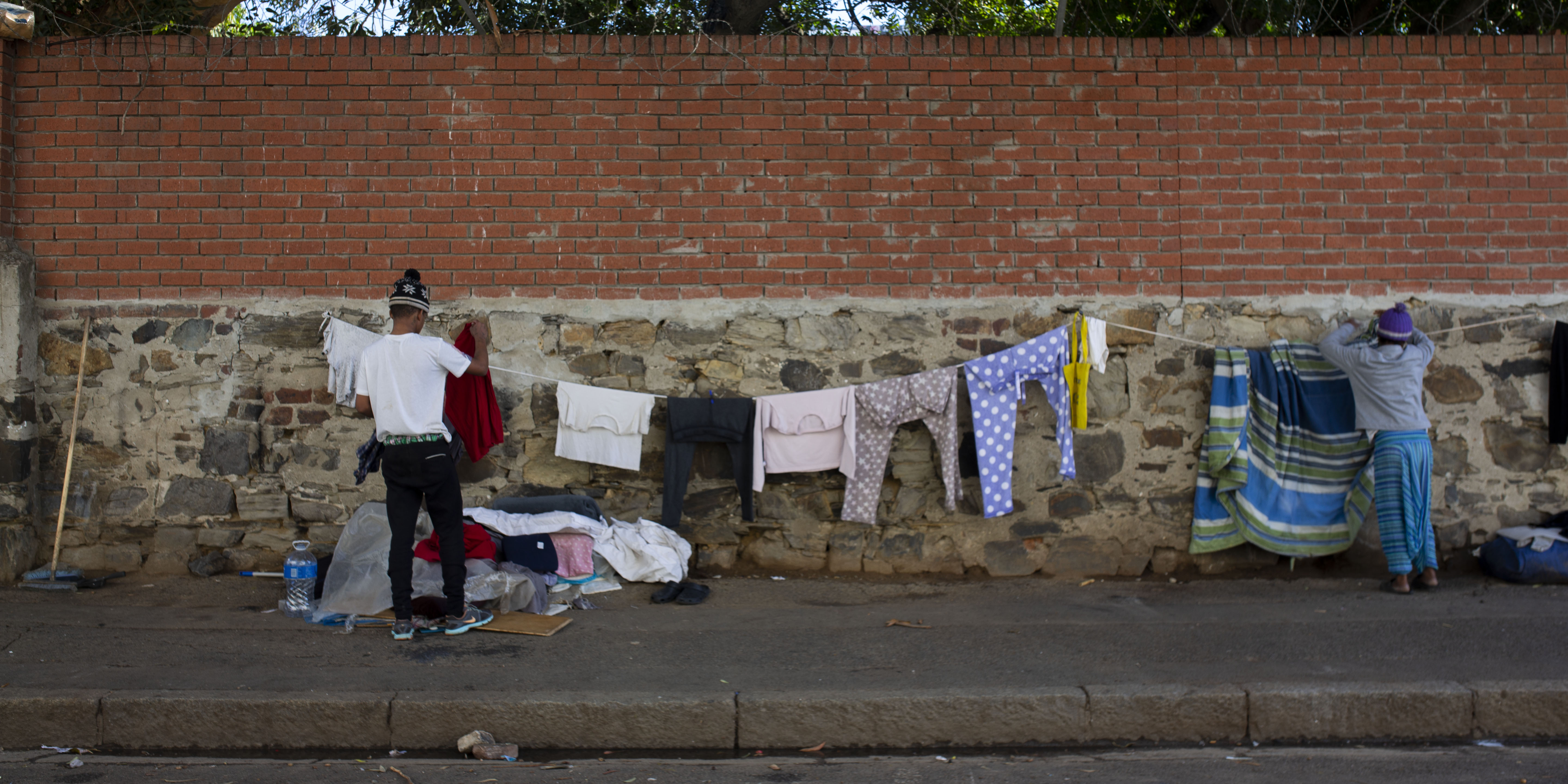 Fines are just the tip of the iceberg for the homeless on the streets of Cape Town. (Photo: Sandisiwe Shoba)

The City of Cape Town has been called out for enforcing a by-law that enables street dwellers to be fined. Daily Maverick discovered that the outrage over fining people who can’t afford to pay has overshadowed the day-to-day issues of the homeless and the need for more creative social development solutions.

“This is the toughest journey I’ve been on, being on the street,” Ashleigh Gallies, 41, who spent the past year living on the streets in Table View, Cape Town, told Daily Maverick.

“Street life hardens you, it makes you tougher.”

Safety was a big concern for Gallies while she was living on the streets and she said she “didn’t know where to hide”. Before arriving at the Haven Shelter in Green Point, where she has been staying for a month, Gallies said she had been robbed and pepper-sprayed several times.

“It’s no fun,” said Gallies. “I’m getting a lump in my throat like I’m sommer gonna cry.”

Gallies is one of the estimated 5,000 people living on the streets of Cape Town. These street dwellers have been in the spotlight over the past week for allegedly being fined by law enforcement members for breaking City by-laws.

“[We] can barely hustle enough money for a pack of cigarettes, how do you expect us to pay? Who has R100?,” questioned Gallies, who described the concept of being fined as “ridiculous”.

The politicians climb in

After an initial report by News24 about fines being imposed on people living on the streets, the issue quickly became politicised.

ANC Western Cape secretary Faiez Jacobs issued a statement on Monday, 1 July, which opened: “We are appalled and disgusted by the City of Cape Town’s war on the homeless, a merciless and heartless onslaught that has seen some of those living on the streets fined for offences such as obstructing pedestrians on sidewalks.”

A statement was released by the ANC Youth League on Tuesday, 2 July, saying it was “not surprised by DA City of Cape Town’s criminalization of the homeless”.

Responding to the News24 report, DA leader Mmusi Maimane said: “This article tries to paint a distorted picture about the DA’s work in government.”

The attention placed on these fines this past week might be new, but the by-law is not. The by-law relating to Streets, Public Places and the Prevention of Noise Nuisances has been in place since 2007. It was not specifically drafted to target people living on the streets, although those are the people most likely to feel its impact.

The by-law does not deal with “homelessness” but deals with general behaviour on the street.

The by-law lists 18 actions considered “prohibited behaviour” in public places. These include: intentionally blocking “the safe and free passage of a pedestrian or motor vehicle”; continuing to beg or follow someone who “has given a negative response to such begging”; bathing, urinating, or defecating in public; consuming alcohol or drugs in public; starting or keeping a fire in an unauthorised area; sleeping or camping overnight or “[erecting] any shelter”, unless in a designated area.

There were 3,051 complaints from the public about anti-social behaviour regarding people living on the street in the first three months of 2019, according to a statement released by the City of Cape Town on Tuesday 2 July.

From those complaints, 199 fines were issued by the unit in relation to the by-law. This means that less than 7% of complaints made by members of the public resulted in fines being issued.

The reality of being fined

Daily Maverick spoke to about a dozen street dwellers over the past week and was unable to locate anyone who had received a fine. However, there were two instances relayed of other people who had received fines.

Simon, 41, is staying at a shelter and had not received a fine. He told Daily Maverick a man named Arab had received a R500 fine for sleeping at the Golden Acre bus terminal near Adderley Street.

Simon said the fines were a “new thing” and Arab was “given a slip of paper” which showed the fine amount owed.

Across town outside the Haven Shelter in Green Point, Iurich, a 23-year-old who’d been living on the streets for five months, said law enforcement had moved homeless people from the area a week before.

“The cops disrupt everything,” he said.

The street, which was previously lined with makeshift structures, had been swept clean.

Iurich said “two guys” who had set up tents on the pavement “were fined R1,500”.

There is no way to say who the fines were issued to as there is no record of whether the person issued with a fine is homeless.

“Effectively, very often we can’t tell you whether we’re fining a homeless person or not because the fines don’t indicate that,” Smith told Daily Maverick.

Disputing the fine means that the person will not be required to pay the amount if the court finds no contravention of the by-law or valid reasons for any contraventions. The hope is that issuing the fine and getting street dwellers to court will incentivise them to accept social development interventions.

“Anybody who looks at that and looks at the number of homeless people on our street and considering that they’re all multiple times a day breaking by-laws repeatedly. The logical conclusion you would have to come to is that we’re underservicing our by-laws – which is true.”

Smith said that for the past four years the focus had been on social development interventions. Instead of strictly enforcing the by-law and the fines for its contravention, law enforcement would instead issue compliance notices. A compliance notice sets out what behaviour is considered non-compliant with the law, what steps a person must take to become compliant and the time-frame in which to do so.

“We’ve issued thousands and thousands of compliance notices; for pretty much two years that’s all we did, just warn people hundreds of times over,” Smith told Daily Maverick.

He said they felt being “heavy-handed with enforcement” would “undermine the progress” being made in social development. However, he continued: “At the end of several years, with the situation steadily deteriorating at some point, you have to say, well, that strategy isn’t working.”

The main reason for the change in approach is that complaints from the public have increased. While there have always been complaints concentrated in particular areas, mainly the central business district, complaints from other areas increased recently. Smith attributes this to a greater number of people being released on parole from prison and an influx of foreign nationals to Cape Town, which has no refugee reception centre.

“During the last year the cacophony of complaints, the intensity of complaints, has gotten steadily worse and a much broader cross-section of communities started complaining to us,” Smith said.

The amount of the fine is determined by the Department of Justice, rather than the City or local government. Smith said they had initially wanted a fine of R50 for begging, but this was increased to R500 by the chief magistrate.

“No human being belongs on the street, every endeavour must be structured to help people off the street,” Smith said.

“Social development is there, and the enforcement interventions create a bit more incentive to support or encourage people who are on the street to consider those enforcement realities – which we’ve exempted them from for quite a while – and weigh them up against the offers being made.”

Haven Shelter CEO Hassan Khan said he’s not opposed to homeless people being required to adhere to the City’s by-laws.

“I don’t believe that a person is too rich…nor too poor [not] to be required to observe the same rules that you and I do,” said Khan.

“You can’t make a public space your home, that is my understanding of how the by-law was designed and promulgated.”

According to his knowledge, a person is warned repeatedly before being given a fine.

He hadn’t heard of a single homeless person who’d been issued with a fine.

“Our law works this way: you must advise the person of the offence, give them reasonable time to move away from the place and that’s the end of the story. Now a person who persists, shows the middle finger to our society, he’s issued with a fine,” he said.

Khan feels the issue has become “skewed” and the focus should be on getting people off the street.

“We should not be investing in keeping people on the street. Putting up a tented structure or building communities on pavements is not the way to develop our society.”

The Haven Shelter is one of the largest organisations in the Western Cape aiding the homeless. But, Khan said shelters do not provide housing.

“Shelters deal with social work, it gets people to reintegrate with their communities.”

At a SA Human Rights Commission (SAHRC) briefing on 3 July, commissioner Chris Nissen said a “proper policy” needs to be implemented to manage the homeless community.

Tammy Carter, the senior legal adviser at the SAHRC, said the commission had received complaints from the Street People’s Movement regarding the City’s treatment of the homeless.

“They’ve had their property confiscated, their clinic cards, IDs, Sassa grant cards [taken] and it just puts them completely outside any safety measures for them. There’s also people’s medication, their irreplaceable photographs and mementos, their contacts,” said Carter.

She said fines deal with homelessness only at a surface level.

“It’s very heavy-handed, it’s very paternalistic. That kind of attitude has gotten us to the point we are at today, where we haven’t acknowledged that there are underlying issues that lead to homelessness, so we’re trying to put a Band-Aid over an amputation.”

She said some homeless persons have “underlying mental health conditions” or “drug addictions”.

The SAHRC said it would investigate whether the City’s by-law infringed on the rights of the homeless.

The lived experience of being homeless

According to David, who’s been living on the streets for 10 years, fines are “just the tip” of the iceberg of issues facing the homeless.

Iurich says he has no family and has found refuge under a bridge.

“Sometimes we can’t even sleep,” he said, referring the heavy storm the night before.

“Winter, everything is wet. Stuff is getting away – blankets, clothes.”

When asked why he wasn’t staying at the shelter, he said “it was full” and he’d be sent “far away” from the CBD.

“Life on the streets is hard,” said Fazlie Fortune, 27, who’d been homeless for two months.

He’d come to the Haven Shelter “in tears”. This was his second day there.

“I had been robbed twice. My clothes, phone and money were stolen,”

Fortune said he feels broken by the world.

“I’ve been through so much, I’ve had enough,” he said.

“Even tonight, I don’t know where I’m gonna sleep.”

Oykhilome, who was having lunch at the shelter, said the Haven didn’t have space for him.

“I had to go see a social worker for treatment first. I came another day for food and they didn’t open the gate.” DM