Arson or no arson, Nyanga Junction is all too frequently non-operational 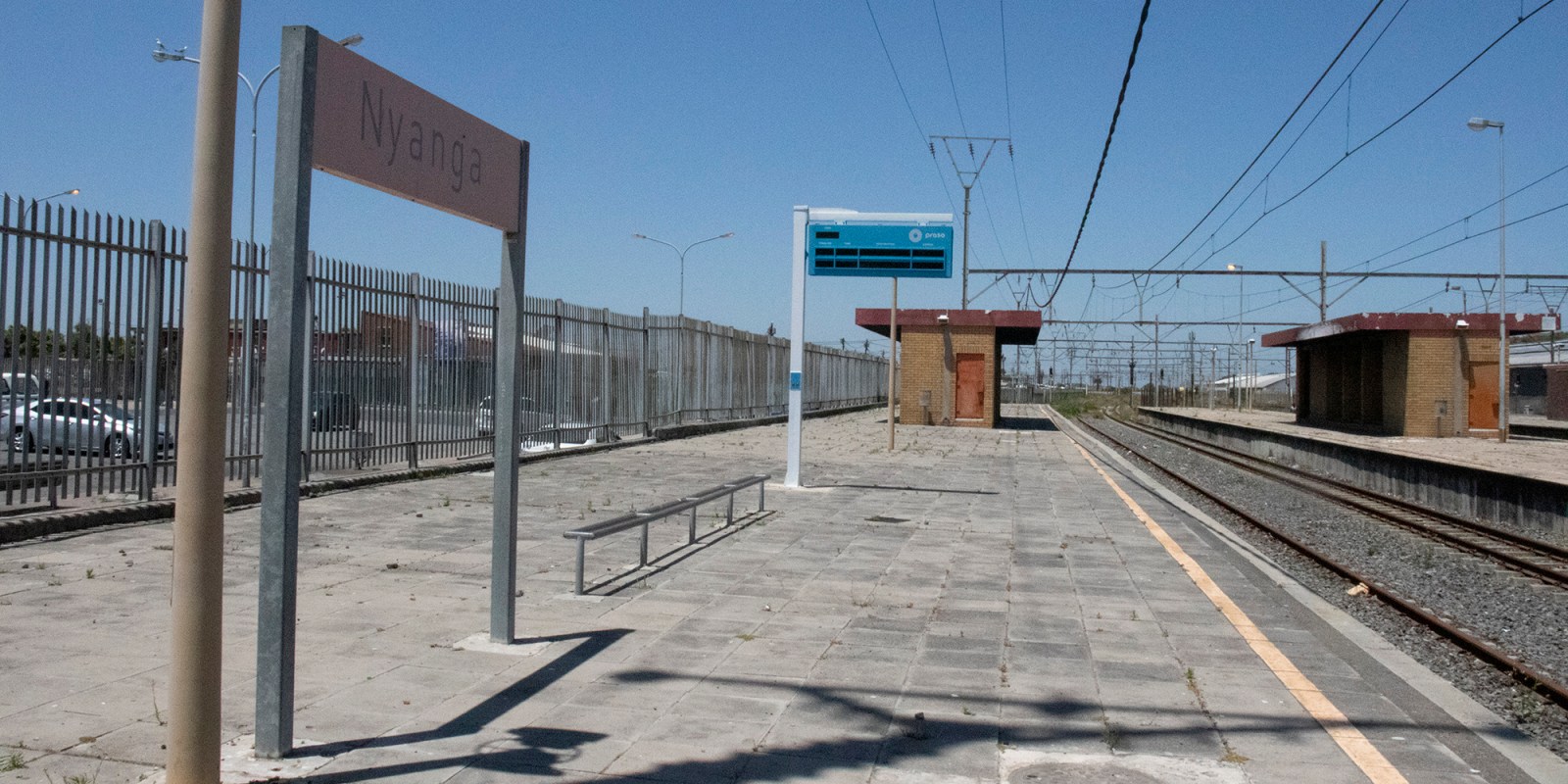 Nyanga is considered a “red zone”, after several service providers were attacked. PRASA has been operating the train station in the area on an intermittent basis since 2016 and then suspended services completely on 3 November 2019 after about 10km of cable were stolen along the Central Line. (Photo: Aisha Abdool Karim)

The burning of two trains at Cape Town station on Thursday morning was a stark reminder of how embattled the Western Cape rail service is. In particular, the Central Line, which runs from major townships to the CBD, has been non-operational since the beginning of November 2019, leaving many commuters in dire straits.

Train services were suspended for a few hours on Thursday after a fire broke out at the Cape Town Train Station in the early hours of the morning. The fire gutted 18 carriages — equalling two train sets. The three-hour delay forced many commuters to seek alternative transport, which can be a costly endeavour.

However, for some, Thursday’s debacle was nothing out of the ordinary. The Metrorail Central Line, which runs from Chris Hani station to Cape Town central has been non-operational since 3 November this year. This line is one of the region’s busiest routes and is one of the main ways people travel from townships like Nyanga and Khayelitsha into the city.

During a press conference in Cape Town on Thursday, Transport Minister Fikile Mbalula told media and civil society groups that he would “fix the rail” and “bring services back” to the embattled Central Line. His promises were met with disdain.

“In the days following, a sustained number of incidents continued to prevent the reinstatement of train service.”

Although the suspension of services in areas along the central line began earlier this month, it has been operating on an intermittent basis since 2016. In particular, Nyanga is considered a “red zone”, after several service providers were attacked. Scott said there had also been “incidents of vandalism”, involving cable theft from the railway.

The shopping mall still draws foot traffic. An array of food, clothing and wholesale shops are located in the vicinity, while several vendors have set up stalls outside both entrances to the junction, offering an array of fresh produce, assorted clothing and CDs.

Across from a PEP clothing store inside the junction, a row of six glass turnstiles marks the entrance to the quiet train station. While the turnstiles look fairly new, some glass panels are missing and others lean to one side. Alongside the turnstile ticket office, counters are closed off behind metal shutters. The only thing visible is a blank electronic Prasa announcement board, used to display train arrival times.

While Prasa officially closed the station in November, people in the area say that there have been no trains running on the line as far back as early October.

Scott assured Daily Maverick that customers were informed of the closure using “all passenger information channels available”. However, there was no signage at the station indicating that the platform was non-operational.

Sandise Nqodi, 31, who has been a security guard at the shopping centre for eight months, says he abandoned using the trains long before the station stopped running, due to lengthy delays and trains not arriving.

“Sometimes it would come an hour late, making me late for work,” he explained.

For Nqodi, the train was the most affordable way for him to get to his job. He works a daily 12-hour shift and travels from Philippi via minibus taxi. A return trip costs him R16 – close to R500 a month. A monthly train ticket would cost R175.

Aside from commuters, there are also others who are feeling the effects of the station’s closure. Lulama Base, 43, is a hawker outside the shopping centre selling scarves, hats and cigarettes. She says the suspension of the Nyanga train service has severely impacted her business because of reduced foot traffic through the area.

That’s now reduced to around R100.

She also believes the expensive taxi and bus fares mean people can no longer afford her wares.

Base lives in an informal settlement in Gugulethu and public transport is too expensive for her so she walks to and from the station, using a trolley to transport her goods. It’s the only way the single mother can afford to make a living.

Another vendor Tatenda Kativu, who is a food vendor outside the station said that there has been a definite change in the junction since the trains stopped running.

“It used to be bustling,” Kativu told Daily Maverick. “For every 10 customers I used to get, now I get about three or four.”

He said that the little foot traffic that still comes through is from people who are visiting the shopping mall, which means that the bulk of the remaining customers stay in the surrounding area. With commuters switching to buses or taxis, neither of which has a rank nearby, there are fewer people moving through the area.

It is unlikely that the scene at Nyanga Junction will change any time soon, with services to the train station suspended “indefinitely”.

According to Scott, Prasa is also looking into installing more stringent security measures such as “surveillance and early detection technology” as well as “reinforced concrete security walling”.

She said conducting repairs at the station is dangerous, and until Prasa can find a strategy to do repair-work safely, the platform will remain closed.

A monthly train ticket costs R190 for Jetaime Naidoo, a commuter on the Southern Suburbs train line. She lives in the Northern Suburbs and takes two trains to get to work each morning. But, Naidoo said she struggled due to train delays at the Claremont Train Station.

“On Monday I had to walk from Parow to Tygerberg, to get a taxi,” Naidoo told Daily Maverick.

When there are delays, she commutes via taxi. A return trip costs her R100. With regular train delays, the taxi commute could cost her roughly R3,000 a month.

The knock-on effect of train delays is also felt by the city’s bus service.

Golden Arrow spokesperson Bronwen Dyke-Beyer said the operator took on some of Thursday’s train commuters. The bus service which already runs at full capacity during peak hours was “fuller than usual”. Extra hours were added to accommodate the influx of passengers. DM