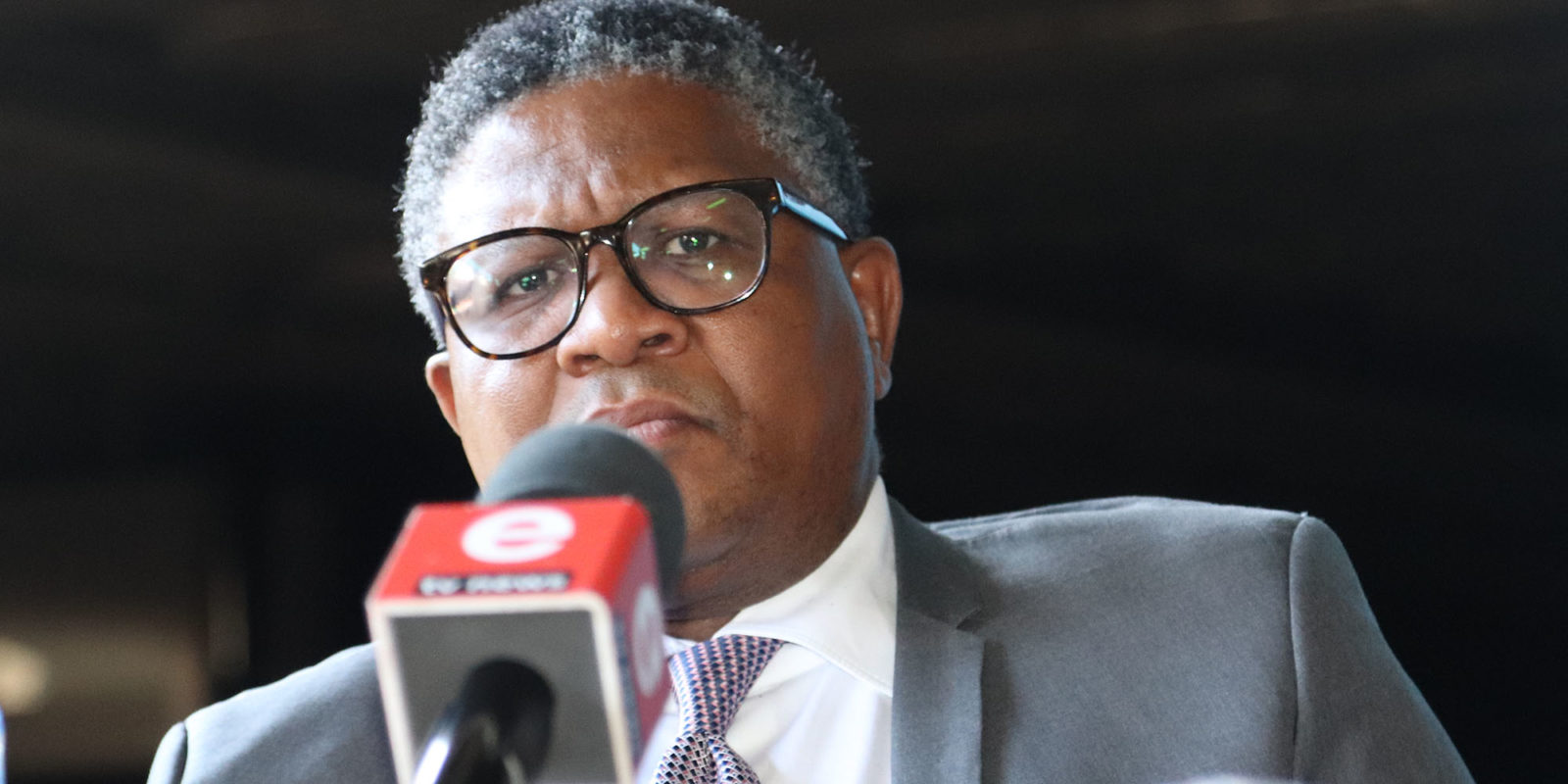 Transport Minister Fikile Mbalula speaks to the media at Cape Town station after 18 carriages were destroyed in a fire on Thursday 28 November 2019. (Photo: Sune Payne)

‘You promised us heaven and earth, minister’ Mmeli Dube of #UniteBehind said on Thursday to transport minister Fikile Mbalula during a briefing after the morning’s arson attack at Cape Town station. But promises have been a key instrument in Mbalula’s tenure so far.

It seemed like a regular press briefing: a hot 30ºC in a train station bearing the brunt of an overnight train fire that destroyed 18 coaches. Damaged glass, debris, the heavy smell of smoke and destroyed carriages are still visible at Cape Town station.

It’s just over an hour since Transport Minister Fikile Mbalula was scheduled to address the media. When he finally takes the stage, it’s once again bravado time for a minister who needs to assure commuters that a train fire will not happen again.

Mbalula has one of the most difficult jobs in the country: get the rail service, particularly Cape Town’s Central Line, back on track. This briefing comes after Thursday morning’s train fire destroyed 18 carriages, with preliminary estimated damage at R16-million to the carriages and R150-million to Prasa’s overhead cables, not to mention the damage to the train station itself, announced Prasa Western Cape regional manager Richard Walker.

Despite the damage to the infrastructure, the focus was on Mbalula and what he was doing to put the rail network back on track. The minister began calmly enough with a prepared statement, saying the criminal attacks on Prasa were “devastating” and that “the state of lawlessness in our commuter rail environment must be uprooted”.

Then when questions were asked, the minister made more promises to fix the rail and bring services back to the embattled Central Line which has been out of operation since the beginning of November 2019 between the CBD and areas such as Khayelitsha and Mitchell’s Plain.

Activist coalition #UniteBehind’s Mmeli Dube said Mbalula had made several promises to commuters to fix the system — at one point, Dube said “you promised us heaven and earth, minister”. #UniteBehind have been trying to ask why the minister had still not met them about illegal procurement contracts and action on a commuter-centred safety plan which will focus women, children, the elderly and people with disabilities. This had been planned in June after the organisation confronted him in Khayelitsha. It says that despite writing to his office four times since, there hasn’t been a meeting.

Mbalula has been transport minister since the May 2019 national and provincial elections and has made several promises to fix the rail network.

But when Walker and Prasa’s acting group CEO Nkosinathi Sishi finished answering questions put to them by journalists, Mbalula took to the stage and began to speak about various issues, including about Western Cape MEC for transport and public works Bonginkosi Madikizela, who had earlier accused the minister of not inviting him to a seat at the Prasa table.

Questioned about this, Mbalula replied: “Madikizela knows that my door is open” as the two have been working together on other transport-related issues such as the ongoing MyCiti dispute and the Go George issues.

On the fact that Prasa was hauled before Parliament’s Standing Committee on Public Accounts last Wednesday evening over the entity’s disclaimer audit opinion, Mbalula said:

“I’m not going to smile with calamity”.

Read in Daily Maverick: ‘You are in a mess — a total mess,’ Scopa chair tells Prasa board

Mbalula told the media briefing “I will come back to you before Christmas” about the finalisation of a permanent board.

“I do not want to reach Christmas with this burden… I’m committed to that.”

The interim Prasa board’s term was due to end in June, but was extended until October. But there has been no formal announcement if the term of the board has been extended until he puts a new board in place.

As Mbalula wrapped up his address, he said there needed to action about the money stolen through dodgy Prasa contracts:

“I’ve never seen a place like Prasa where to get a tender is as easy as ABC.”

Crooks who steal and have stolen money from Prasa, Mbalula said, “we will tackle them with a ferocity of a bull and the agility of a cat”.

But when it was finished, a remark from a journalist stood above everything else in his media conference on a hot summer’s day in Cape Town:

“Does he always ramble that much?” DM