Assaulted by her ex: ‘I feel ignored by the justice system’ 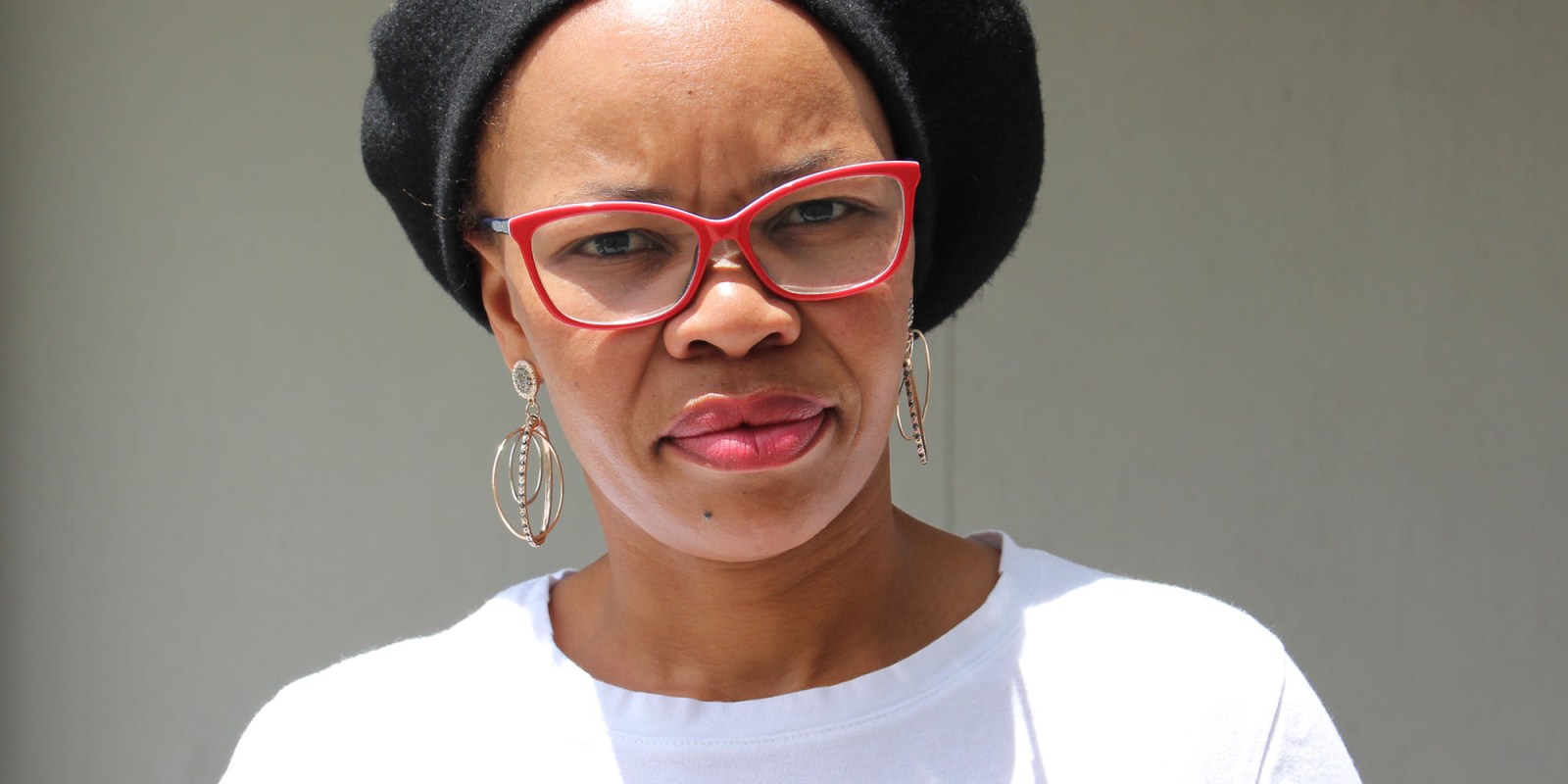 Primrose Mrwebi (43) is fed-up with the justice system after receiving minimal help from SAPS when she reported being physically assaulted by her ex-partner this year. 20 November 2019. (Photo: Sandisiwe Shoba)

43-year-old Primrose Mrwebi was assaulted by her ex-partner two months ago, but after opening a case against her attacker, little has been done to bring him to book. She’s made her case public, hoping that speaking out will finally get her the justice she deserves.

This is the question Primrose Mrwebi asked herself after being assaulted by her ex-partner in September 2019. The pair had a tumultuous two-year relationship which culminated in Mrwebi being dragged out of her vehicle at her apartment complex in Century City, Cape Town.

Mrwebi was in shock. Her back, left knee and right elbow were injured and blood was seeping through her white shirt.

A neighbour heard her screams, rescued her and called the cops. She urged Mrwebi to head straight to the police station and report the incident. Her attacker had already fled the scene.

But when she arrived at Milnerton SAPS, shaking and covered in blood, she was told to “sleep it off” and come back the next day.

This was the first of many barriers she faced trying to open a case against her assailant.

She returned the next day to give her statement but was told she needed to submit a completed J88 form before a statement could be submitted.

“So now I couldn’t report him because this form was a stumbling block,” she said.

The J88 form is filled out by a healthcare practitioner after the survivor undergoes a thorough medical examination. It serves as a crucial piece of medical evidence.

According to Bafana Khumalo, co-founder and Head of Strategic Partnerships at Sonke Gender Justice, doctors may be reluctant to complete the form, “because you have to give evidence in court as a witness”.

“Now because these cases take too long, doctors come to the court and the case is postponed, which is not uncharacteristic. In worst-case scenarios [it’s postponed] for over two, three, four years.”

The incident happened over a weekend and Mrwebi drove herself to the nearby Mediclinic to be examined. When the time came to sign the form, she was told the doctor authorised to do so would only be present on the Monday.

She returned that Monday, but was sent away and told to come back the next day. The form was eventually signed on the Tuesday, but there was confusion about whether Mrwebi could leave with the form or a SAPS officer had to fetch it.

“At this stage, I’m such a mess emotionally,” she said, explaining how her statement was eventually taken when she personally delivered the J88 form to the station.

But Mrwebi was met with police silence for two months after opening the case — and her attacker was still trying to contact her.

“The guy is calling me, sending me pictures of his new girlfriend, insulting me.”

“The investigating officer established contact with her, and she was in communication with two officers at the detective branch. During these engagements she was apprised of progress in the investigation and advised on the process of obtaining an interim protection order in terms of the Domestic Violence act,” he wrote via email.

“Hurt” by her situation, the Speaker of the Western Cape Provincial Parliament, Masizole Mnqasela, contacted station commander Brigadier BM Stander at Milnerton SAPS to find out why her case had never been followed up.

Mnqasela told Daily Maverick that he was “concerned” that if a woman with Mrwebi’s financial privilege could face barriers when trying to open a case, how much harder must it be for a woman who was poorer?

Gender-based based violence was officially declared a national crisis in 2019 with femicide and rape statistics showing that South Africa has one of the highest rates of GBV in the world. The 2018/19 crime statistics also show a rise in the rate of sexual offences.

But underreporting of gender-based violence is a major challenge for crime statistics as outlined in StatsSA’s 2018 Crime Against Women report. It shows that roughly 30% of women sampled reported sexual offences to the police. But even these figures are unreliable as the margin of error was too large.

One of the consistent reasons cited for underreporting is “police would do nothing or police can do nothing”.

Khumalo explained that GBV survivors trying to open a case are often frustrated by long waiting periods and general inefficiencies, especially for those who have experienced severe trauma such as rape. They can’t bathe themselves until they’ve been examined for DNA evidence.

“So somebody is made to sit three to four hours with all that evidence in her body. Some people choose to leave, eventually, and go and take a shower because the trauma is just too much for them.”

Survivors are often re-traumatised while trying to report gender-based violence. The average police officer is seldom trained to handle such cases correctly, which is why every station is meant to have a sexual offences officer.

Survivors must be taken into a private room where, as Khumalo explains, they must be interviewed, then taken to hospital. The officer must collect all the necessary evidence and enter that on the case docket.

For Mrwebi, this didn’t happen, after driving herself back and forth to the clinic and paying exorbitant fees for a medical examination.

She also didn’t receive trauma counselling, until after Mnqasela had put pressure on Milnerton SAPS.

“Nevertheless, following her engagement with the detective officers, trauma counselling was immediately arranged.”

Mrwebi feels that “the system excludes women who cannot afford their own well-being”, a fact supported by a Commission for Gender Equality Report from 2019 that showed a serious underfunding issue for shelters for abused women. Thuthuzela Care Centres, located in hospitals, are also underfunded and scarce. These are “one-stop shops” for GBV survivors to report crimes and receive care. Khumalo says Thuthuzela Care Centres are seldom located in rural areas.

When asked whether justice worked in favour of “privileged women” such as Uyinene Mrwetyana, the 19-year-old UCT student who was murdered at Clareinch Post Office this year, Mrwebi said it wasn’t fair to say that as the system is “dysfunctional” and fails all women, but admitted that less-privileged women were less likely to receive justice, which is “problematic”.

For Mrwebi, this was the first time her ex-partner had been physically violent with her, and despite describing her relationship as “great”, there was a sinister undertone.

“There was this uncomfortable thing that my instincts told me, but because you trust this person and you’ve seen their good side, you don’t think that the turnaround is going to be hectic.”

But on his bad days, she described him as insecure, manipulative and possessive. He took issue with the fact that Mrwebi, a writer, poet and performer, had famous friends. He also kept tabs on all her communications.

“Not only did he hack into my WhatsApp, but he went into my Facebook, my emails, everything that I could think of.”

He went from cyber-stalking her to showing up unannounced at events she was attending.

Fed up, she eventually ended her relationship with the Hawks officer in October 2018. Little did she know that a year later he would assault her after showing up unannounced at her book launch.

“At the end of the day, that guy who assaulted me must pay for his crime. It’s people like him, within the policing system, who’ve gotten away with too much,” she said.

“We cannot have a situation where the people that are supposed to be protecting our communities are the perpetrators of these violent crimes against women.”

Though Mrwebi says she’s unaware of the progress of the case, Stander confirmed that the “investigation had been finalised”:

“It has been referred to the senior public prosecutor for a decision on prosecution. The decision is awaited.”

Mrwebi won’t be silenced, but now all she can really do is wait for the justice system to bring her attacker to book. DM