#TheTotalshutdown revisited: ‘Women are under attack in SA’ 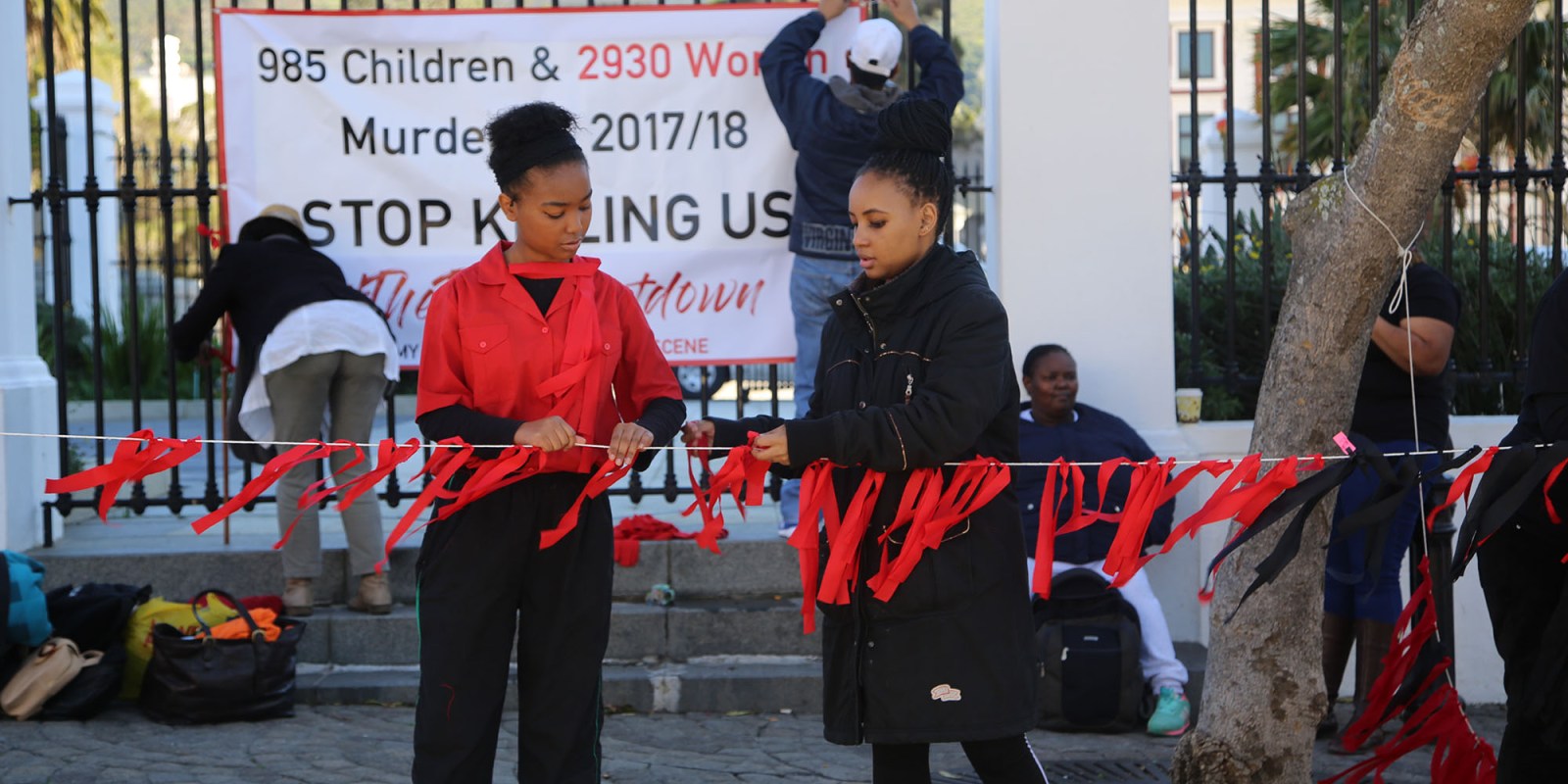 Red and black ribbons are hung on trees outside Parliament in Cape Town on 1 August 2019 to symbolise 3,915 women and children killed in gender-based violence during the 2017/2018 financial year. (Photo: Sandisiwe Shoba)

Members of #TheTotalShutdown movement gathered outside Parliament in Cape Town to raise awareness on the scourge of gender-based violence facing women, children and gender non-conforming persons in South Africa on Thursday. They have called it a national crisis.

A group of about 50 women gathered outside the gates of Parliament to hang up 3,915 red and black ribbons symbolising the number of women and children who died in gender-based violence in the 2017/2018 financial year.

“Women are under attack in South Africa,” said Zintle Olayi, the Western Cape spokesperson for #TheTotalShutdown movement against gender-based violence.

The ribbon-hanging was a part of a first-anniversary commemoration ceremony of #TheTotalShutdown protest which took place on the same date in 2018. In that demonstration, more than 200 people marched to Parliament in Cape Town where a memorandum of 24 demands was handed over to the Presidency.

One demand Olayi believes is important, but hasn’t been met since 2018, is the decriminalisation of sex work.

“Sex workers are here, helping us and standing in solidarity with us. And we partner and work a lot with SWEAT,” said Olayi.

The Sex Workers Education and Advocacy Task Force (SWEAT) is one of a number of organisations under the Total Shutdown banner, including Asijiki, a group advocating for the decriminalisation of sex work, Rape Crisis Cape Town Trust and the Triangle project, an LGBTI human rights organisation.

Nosipho Vidima, the Human Rights and Lobbying Officer at SWEAT, says the criminalisation of sex work breeds a culture of stigma and discrimination against sex workers.

“As long as criminalisation continues under a system that we operate in, in South Africa, we are going to get more cases of sex workers dying, sex workers being beaten up,” said Vidima.

She says that in many cases sex workers are obstructed by police officers when trying to report a rape, which has a silencing effect.

“If a sex worker faces violence, she’s not gonna report it.”

According to Vidima, sex workers are also easy targets for perpetrators of gender-based violence.

“They know that their (sex workers’) voices are limited by the current law, so it’s hard for a sex worker to go to a police station anyway.”

Daily Maverick tried to speak to some of the sex workers at the commemoration event, but SWEAT leaders refused, saying the women needed to be protected as some had not publicly disclosed that they were sex workers.

One of the young faces present was 13-year-old Isabella Schutter and her mother Heidi.

“I took her out of school today to come to the march,” said Heidi Schutter.

Isabella who is in grade 7, says she’s seen and experienced toxic behaviour from boys in her primary school.

“There’s girls at school who don’t like going to school because of the boys. There are girls who are afraid to go outside,” she said.

She said there should be more programmes — more education — for men on how to be real men, good men.

“Maybe with boys, maybe with children, we start there, but there isn’t enough education,” she said.

“We need to stop these ideas of being macho or who’s taken the most virginities. (Ideas such as) respect a man, and if you don’t he will beat you until you listen. You know those kinds of things.”

Onica Nonhlanhla Makwakwa, who was the convenor of the 2018 march and is now a part of the Women Inspired Solutions for Empowerment (WISE) said that gender-based violence was a national crisis.

“We need to respond to it in a way that’s fitting of an emergency.”

She says that the government needed to provide funding to advance the cause against gender-based violence.

“It starts with funding the Thuthuzela care centres, for example, which are the one-stop centres for rape victims — where they can go in, get counselling, get legal/judicial assistance and all of that.”

According to Makwakwa, the WISE collective has called for provincial legislature debates on gender-based violence.

“The Western Cape is confirmed for 15 August.”

The commemoration concluded with a moment of silence before the noon gun fired, after which, members stood in solidarity with the Moms Move for Justice march against gang violence, which reached Parliament soon after to hand over a memorandum of demands. (See accompanying article here.)

Former City of Cape Town mayor and now Minister of Public Works and Infrastructure, Patricia de Lille, made an appearance at the converged protests outside Parliament, but leaders from the #TheTotalShutdown movement say she was not invited.

“She is not welcome here,” they shouted, asking why she appeared in 2019 when she allegedly didn’t show solidarity in 2018.

#TheTotalShutdown held other events across the country. In the Eastern Cape, a march which concluded in a candlelight vigil took place in Mthatha; Mock funerals are being held at police stations in Port Elizabeth from 27 July to 31 August and in the Free State a human chain was formed around Hoffman Square in Bloemfontein.

The memorial will be on display for the month of August. Members of the public are invited to contribute to the memorial throughout the month by writing the names of deceased loved ones on the ribbons. DM