Two in court for murder of Jesse Hess and grandfather 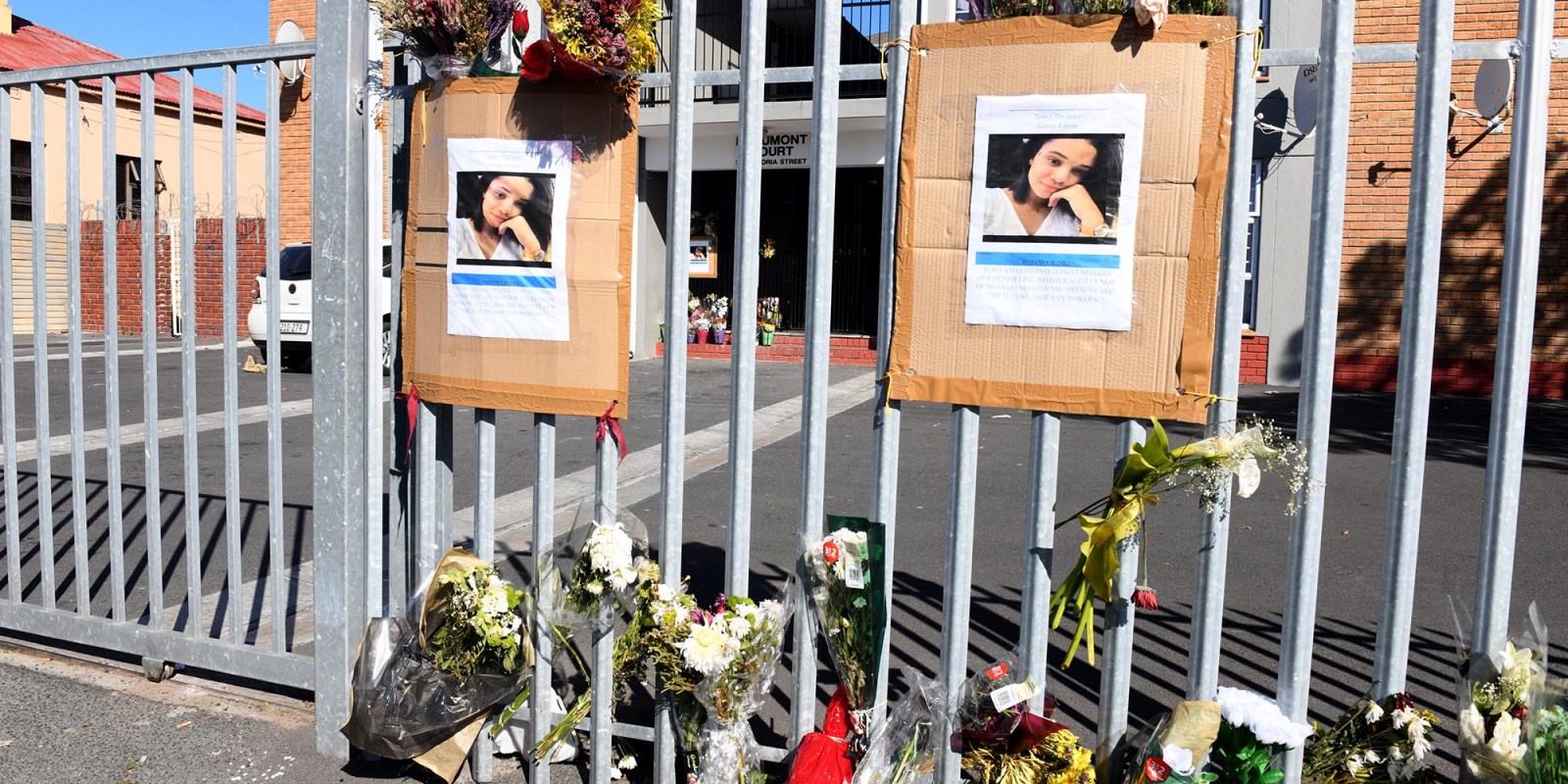 CAPE TOWN, SOUTH AFRICA - SEPTEMBER 08: Flowers are placed outside Beaumont Court in Parow where 19-year-old Jesse Hess was murdered, together with her 85-year-old grandfather, Chris Lategan on September 08, 2019 in Cape Town, South Africa. Hess, a Theology student at the University of the Western Cape, was found dead on her bed, while her grandfather, Lategan was found tied to a toilet in their home. No one had been arrested for the murders. (Photo by Gallo Images/Netwerk24/Edrea du Toit)

The two men accused of murdering 18-year-old Jesse Hess and her grandfather Chris Lategan three months ago both had previous criminal convictions, the Bellville Magistrate’s Court heard on Wednesday.

Jesse Hess, an 18-year-old theology student from the University of the Western Cape, was constantly excited about life and everything it had to offer her, her stepsister Shanay Taute told Daily Maverick.

“Her presence, being around her was absolutely amazing; it was a dream being around her. It actually made you feel better being around her because just her bubbly personality made you forget everything that was going on in just that split second,” said Taute, speaking about her late stepsister outside the Bellville Magistrate’s Court on Wednesday 20 November.

On August 30, Hess’s light was snuffed out. Hess and her grandfather, 85-year-old Chris Lategan were found dead in the family’s Parow flat that day. Lategan was found tied and gagged in the bathroom, while Hess was found naked on her bed. It is believed the pair were strangled.

Hess would have turned 19 last month.

The two accused of murdering Hess and Lategan are David van Boven and Tasliem Ambrose, who live on the same street in Hanover Park. They also face two charges of aggravated robbery for the theft of a TV, two cellphones and Hess’s backpack. According to prosecutor Emily can Wyk, further charges may be added.

It has been reported that Van Boven, 31, is Hess’s second cousin on her mother’s side. He spent most of Hess’s life behind bars after being convicted of raping a relative, and was released on parole in December 2018.

Van Boven was arrested on Wednesday last week for allegedly raping a 16-year-old girl in Hanover Park on Monday, November 11. He appeared in court on Friday 15 November on charges of robbery, rape and attempted murder. It is alleged Van Boven tried to suffocate the Hanover Park teen, but was interrupted by the girl’s mother. After fleeing the scene of the crime, Van Boven was apprehended in Struisbaai on Wednesday following a tip-off from a member of the community.

At the time, Van Boven was already a person of interest in connection with the Hess and Lategan murders.

On Wednesday, Van Boven arrived in court holding a bag of bread, and, when courtgoers and family members wearing shirts saying “Justice for Jess” told him to remove his hoodie he looked at the crowd and asked, in Afrikaans, “Why do you want to see my face?”

His co-accused, 37-year-old Ambrose, has a previous conviction for being in possession of drugs and a firearm, and has another case pending, according to the magistrate on Wednesday. Ambrose was taken into custody on Tuesday.

According to Taute, the family sat down together after the bodies were discovered and debated who could have killed Hess and Lategan, but did not expect that a member of their “blood family” would be arrested.

After trying to get hold of Hess and receiving no answers, Hess’s aunt Sandy raised the alarm and her stepmother, Audrey, went to the flat to investigate. She had to break through the glass-panelled door to get into the apartment, where she found the two bodies, according to a report on News24.

Taute told Daily Maverick that since that day the family has been in emotional turmoil, although they make sure to sit down and talk every night.

“You feel angry, you feel sad. All you want to know is why, the reason behind this, so that the family can start gaining closure and move forward, and keep her memory in existence,” she said.

In the weeks following her death #JusticeForJesse trended on social media. Hess’s face appeared on posters and placards during protests and marches against femicide and gender-based violence, and her story gained national attention.

Although Hess’s murder, alongside the rape and murder of University of Cape Town student Uyinene Mrwetyana days earlier, sparked outrage, little has been done to change the lived experiences of women in South Africa.

In September, President Cyril Ramaphosa promised an update and overhaul of the National Register of Sex Offenders, giving Parliament the job of changing legislation to make the list publicly available. But currently, only employers who want to check up on an employee who works with mentally handicapped people or children are allowed to access the register.

Ramaphosa also promised to address Cabinet and request that anyone convicted of crimes against women and children should be given harsher sentences.

But Taute does not believe time in prison is enough. She argued that many of the men who repeatedly rape women are more comfortable in prison, where they have food and shelter, than they are as free men. She wants the death penalty reinstated.

Both Ambrose and van Boven were denied bail, and will appear in court again on February 12 2020. DM