Ramaphosa addresses the nation: ‘Let’s end the violence that has engulfed our streets’ 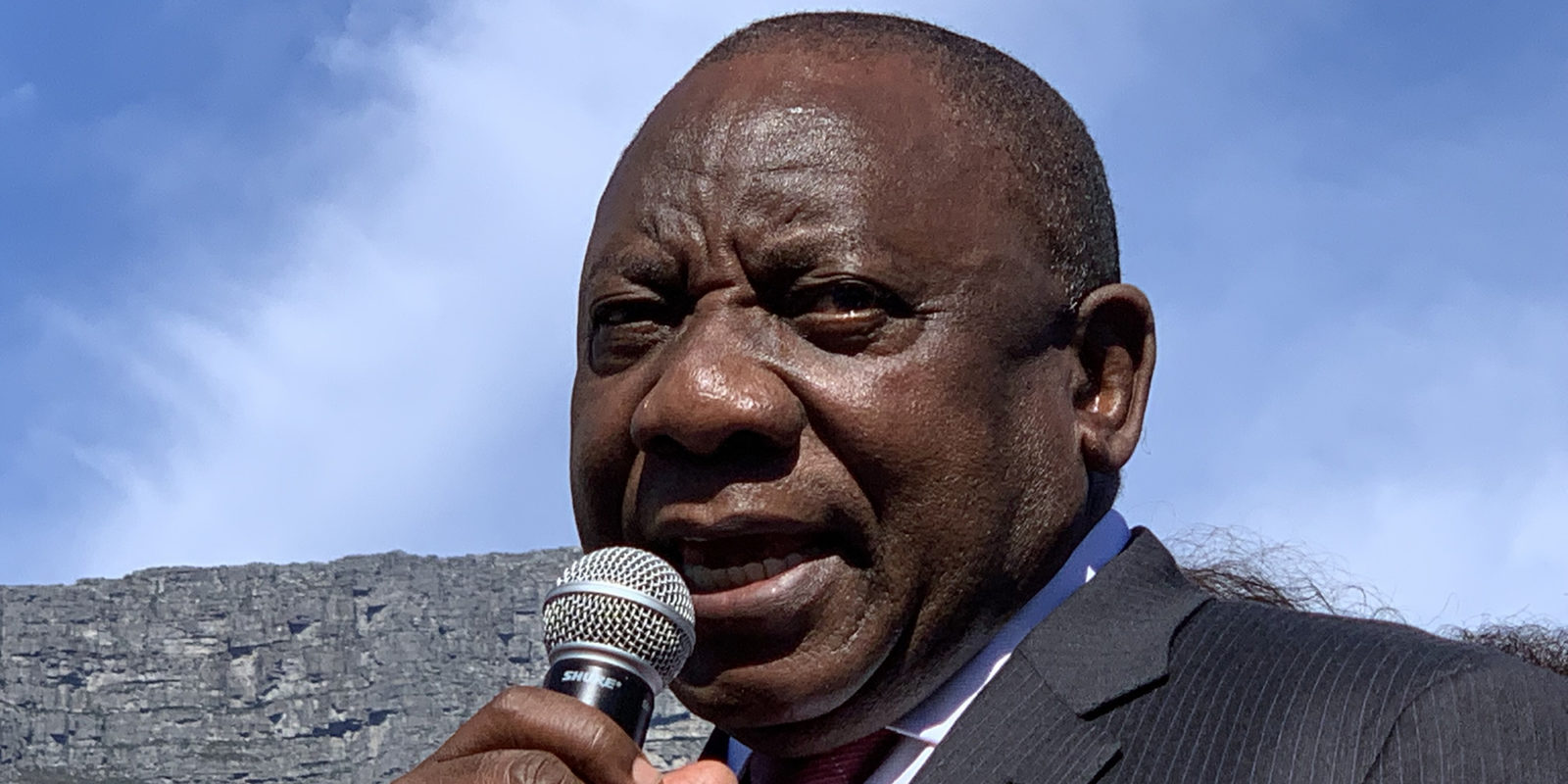 President Cyril Ramaphosa accepted a memorandum and addressed a sea of people at the protest march against femicide and Gender Based Violence on 5 September 2019 outside Parliament in Cape Town. Photo: Anso Thom

After days of national outrage about violence against women, together with the deaths of at least 10 people in Gauteng as a result of xenophobic conflict, President Cyril Ramaphosa finally addressed South Africa directly in a TV broadcast on Thursday evening. Pleading for calm, he pledged measures to address gender-based violence and called for ‘engagement’ on grievances involving immigrants.

It was a week in which the streets of Cape Town and Johannesburg seethed with protest and violence. And on the fourth day, the president finally spoke.

In the course of a 20-minute address broadcast on TV on Thursday night, President Cyril Ramaphosa attempted to quench the conflagration of national anger and frustration sparked in recent days.

While the ostensible purpose of the address was to respond to the demands of thousands of protesters who have marched on Parliament two days in a row demanding a more urgent response to violence against women, Ramaphosa could also not ignore the outbreak of xenophobic violence and looting that has seized parts of Gauteng.

The president thus described South Africa as “deeply traumatised” twice over: first by “acts of extreme violence perpetrated by men against women and children”, and second by “acts of violence and criminality directed against foreign nationals and our own citizens”.

He had a number of concrete proposals to address the first problem. When it came to the second, actions were thin on the ground.

Ramaphosa promised an updated and overhauled National Register of Offenders, which “will list all the men convicted of acts of violence against women and children”. Parliament is to be tasked with amending legislation in order to make this register publicly available.

“I will propose to Cabinet that all crimes against women and children should attract harsher minimum sentences,” Ramaphosa said.

He stated he was in agreement that prosecutors should oppose bail and parole for those who rape and murder women and children.

Deviating from the text of his address, the president added: “A life sentence must mean a man who perpetrates rape and murder is in prison for life.”

Prison rehabilitation programmes are also to be “increased and reconfigured” with the aim of reducing repeat offenders.

But such measures are only of value when cases are properly prosecuted and convictions secured. In tacit acknowledgement of this, Ramaphosa made his loftiest promise: “All gender-based violence cases that have been closed or that were not properly investigated must be reviewed”.

Ramaphosa also pledged action on other issues impeding the successful prosecution of rape: dealing with delays in DNA testing, ensuring the availability of rape kits in police stations, and tackling the backlog of cases.

A “national multifaceted plan to prevent gender-based violence” is to be implemented in schools, communities and workplaces, with the minister of finance asked to find additional funding.

The president indicated that the measures he outlined in his address did not represent the total extent of action to be taken.

“The women of our country are calling for emergency measures to end this violence,” he said.

“I will therefore be asking Parliament to discuss and identify urgent interventions that can be implemented without delay.”

But while many South Africans will have heaved a sigh of relief at hearing the president pledge concrete action on just about anything, was it enough?

Expectations for Ramaphosa’s address on the gender-based violence problem were high. Earlier in the day, Ramaphosa had addressed several thousand protesters outside Parliament, announcing: “We are essentially going to draw a line in the sand”.

Did the proposals he outlined amount to a “line in the sand”?

On Thursday, the Commission for Gender Equality (CGE) put out a statement indicating the “solid commitments” needed from Ramaphosa “if he is serious about tackling the crisis”.

Several of these essential commitments were absent from Ramaphosa’s address.

The CGE called for the National Prosecuting Authority to be given additional resources to enable senior prosecutors to deal with heavy caseloads.

The commission pointed out that the ministry of women has yet to finalise the national strategic plan on gender-based violence, let alone provide a budget.

The CGE also wanted to see a commitment to government support for women’s shelters, which it described as being “inadequately resourced, with very poor infrastructure, and places where secondary victimisation often occurs due to government failure to monitor the conditions in their facilities”.

One of the biggest omissions from Ramaphosa’s address was the mention of Thuthuzela Care Centres, which are supposed to provide “one-stop” services for rape survivors. The CGE called on Ramaphosa to pledge better funding for the centres.

But while Ramaphosa’s proposed plan of action on the issue of gender-based violence may be criticised for insufficiency, it was far stronger than his ideas for tackling xenophobic conflict – which were largely non-existent.

“We know that at least 10 people have been killed in this violence,” Ramaphosa said. In his spoken address, he added that one of these people was a foreign national; in the written text, it states that two were foreign nationals.

He reminded South Africans, for the umpteenth time, of the support that the anti-apartheid movement received from other African countries.

He called for strengthened economic, social and trade ties between South Africa and its neighbouring countries.

Continuing the rhetorical tightrope act of condemning xenophobia while assuring locals their concerns would be attended to, he said: “Where communities have genuine grievances these must be addressed through engagement and dialogue”.

There was, however, no indication of any formalised machinery which would take on the task of arranging such dialogue.

The president laid both praise and responsibility for ending the violence at the feet of the police and the criminal justice system.

Civilians could assist, he said, by not spreading false videos and information on social media “with an intention of negatively portraying our country and its people”.

Ramaphosa’s final proposed solution to the violence: a weekend of prayer for the nation:

“We call on all religious leaders and communities to lead the country in prayer and contemplation this Friday, Saturday and Sunday.”

He concluded with an exhortation to cooperate to restore calm.

“Let us build the South Africa we want, and which all our people so richly deserve.”

It was an address that was both timely and overdue, as criticism has mounted over the past few days about Ramaphosa’s apparent inability to seize the moment and restore control to a situation of crisis.

Outside Parliament earlier in the day, Ramaphosa had told protesters that he would be visiting the Eastern Cape home of the family of murdered UCT student Uyinene Mrwetyana on Friday.

“It’s too late!” a woman shouted in response. DM