A shocker of an MTBPS, some government-in-action spin a...

A shocker of an MTBPS, some government-in-action spin and thin political skin 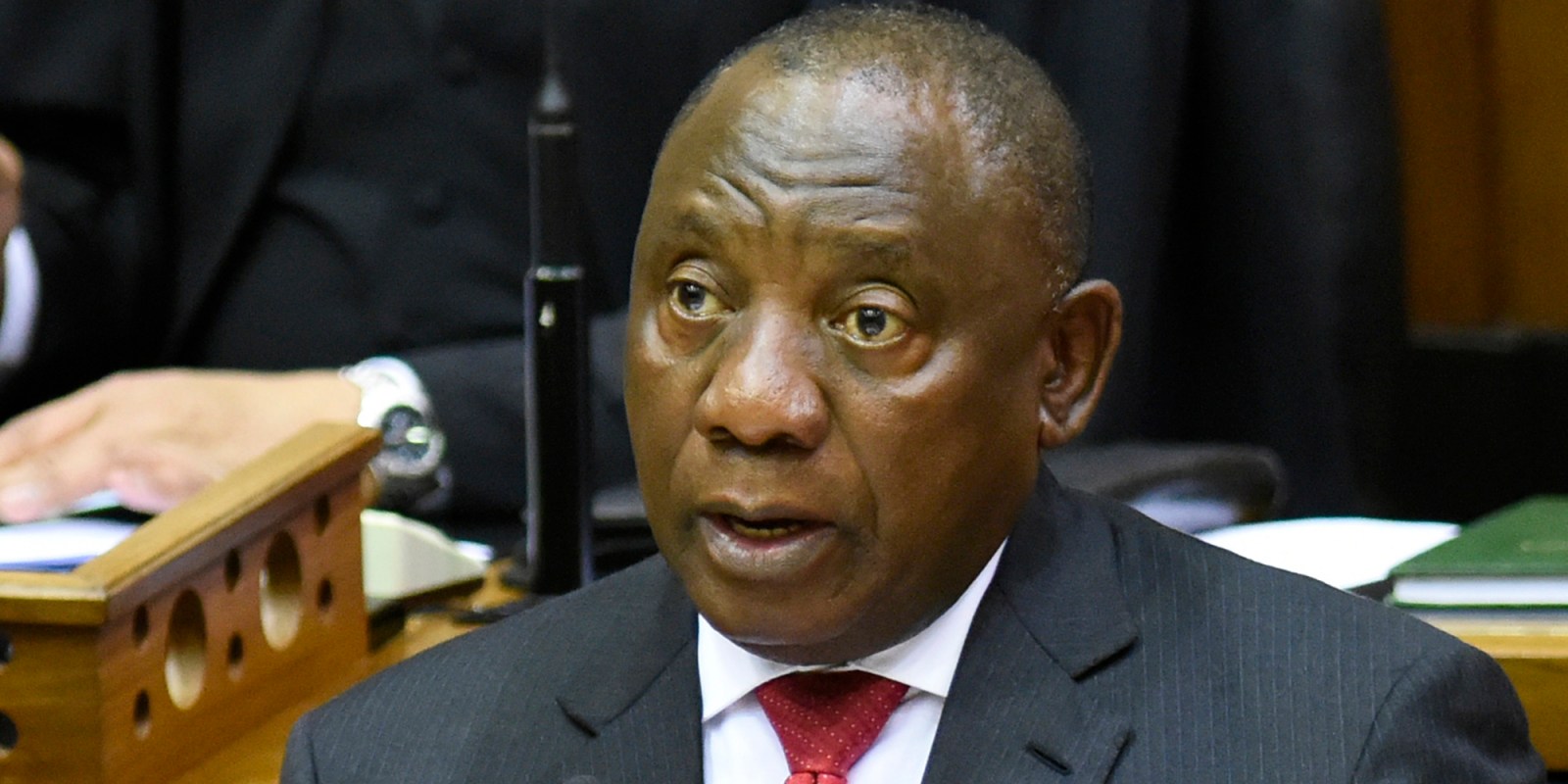 President Cyril Ramaphosa answers questions on August 22 2019 in the National Assembly for the first time since he was inaugurated as the country's president in May. (Photo: Gallo Images / Brenton Geach)

From a walkabout aircraft engine to the ‘concoction of contradictions’ of low growth, low revenue but high spending expectations, the economy loomed large over Parliament. Then, add some governance hiccups and a bit of political thin skin.

A day after a shocker of a medium-term budget policy statement (MTBPS), President Cyril Ramaphosa told MPs of the satisfaction of – rather than lamenting – putting shoulders to the wheel to “do the painstaking work to rebuild our economy”.

Then he segued into some PR for the upcoming investment conference, South Africa’s second in two years, to highlight that it is oversubscribed. And so, for some three hours, regardless of what was thrown at him, Ramaphosa maintained the line of “we are working”, “we are taking steps” or, as the official narrative has it, a government in action.

It hadn’t quite been so determinedly flush just before the presidential Q&A earlier on Thursday. Two floors up from the House, Finance Minister Tito Mboweni had talked about the choice between whingeing and doing, but also more realistically about the “concoction of contradictions”.

Mboweni couldn’t have put it more bluntly to the four finance and appropriation committees of Parliament that traditionally sit the day after the MTBPS or the Budget.

But if any parliamentarian still had any doubt what the MTBPS means, the finance minister went a step further:

“If you have three BMWs at home and your income collapsed, you sell some,” Mboweni told lawmakers. “Will we [government] sell some assets? Yes, we will. Will we reduce costs? Yes, we will.”

At least some of that means shutting down what Mboweni calls leakages – anything from malfeasance and wastage to corruption. Like the spare aircraft engine that went walkabout from SA Technical, part of the SAA Group, that’s meant to service and maintain the fleet of aircraft.

Meanwhile, it also emerged that aside from cutting domestic business class travel for members of the executive, diplomatic benefits may come into the National Treasury crosshairs. A chat with the International Relations Cabinet counterpart is on the cards to talk about “rationalising missions abroad and a number of things like diplomatic costs that can be rationalised”.

In the House, the fallout of the political heave-to in the DA saw a bit of a reshuffle on its parliamentary benches. While the party’s newly elected parliamentary leader, John Steenhuisen, has moved into the seat vacated when Mmusi Maimane resigned, Steenhuisen’s chief whip seat was taken up by DA MP Natasha Mazzone, now the DA’s first-ever woman chief whip.

Ramaphosa congratulated both, before accidentally promoting Lechesa Tsenoli from deputy speaker to speaker at the start of the presidential question session. But that’s happened before in different sittings in October, as did the accidental promotion of ANC Deputy Chief Whip Doris Dlakude to chief whip.

But then, much of what unfolded in Parliament during October happened in the absence of ANC Chief Whip Pemmy Majodina.

On Thursday, it emerged she was travelling abroad, for the second time in the month, this time to China.

“She is on political deployment by Luthuli House… in China,” confirmed Dlakude.

This coincides with the official working visit by Deputy President David “DD” Mabuza, accompanied by several ministers and deputy ministers, to Beijing and Shanghai for the South Africa-China Bi-National Commission from Thursday to Sunday.

Earlier in October, it was confirmed that Majodina was abroad, although the reason could not be established officially. According to the parliamentary grapevine, she was then in Japan. Before that, Majodina, in a highly unusual move for any chief whip, was sworn in as member of the Pan-African Parliament at its October session.

It appears the ANC does not seem to mind that its chief whip is frequently gone from Parliament.

Perhaps it’s a misunderstanding of the role of a chief whip. Or maybe it’s a case of not thinking Parliament’s important enough.

A chief whip is a critical and decisive position in Parliament. A chief whip is the fulcrum of the party’s parliamentary caucus with the responsibility to ensure not only that the political line is toed, but also in charge of overseeing the administration, which includes constituency work. A chief whip is central to maintaining liaison across party-political lines, including in structures like the Chief Whips’ Forum and the programming committee, to ensure the smooth functioning of the national legislature.

The not-so-smooth running of Parliament’s legislative front came under the spotlight on Thursday’s programming committee in a briefing on legislative amendments arising out of Constitutional Court judgments.

Of the 18 Constitutional Court rulings that required Parliament to amend a total of 16 laws, the national legislature was able to complete those changes before the original deadline in only three cases – and with the extended deadline in two.

In four instances, Parliament failed to meet the deadlines, but this did not have an impact in law. This was effectively so because the Constitutional Court had written a proviso into the law pending the completion of parliamentary legislative processes. However, in one case, there was an impact.

The presentation did not specify specific judgments, but did indicate another nine Constitutional Court-ordered amendments were still in progress. That process could take between one to two years, with legislative complexities a factor alongside the pressures of the parliamentary calendar.

Parliamentary responsibilities also arose when Mboweni addressed the finance and appropriation committees, where the dire mood of Wednesday’s MTPBS was not lifted. National Council of Provinces (NCOP) delegate Yunus Carrim, co-chairperson of that session, was blunt:

“We are where we are because we failed our oversight… We can’t fold our arms. We have been complicit,” he said in a call to arms to ensure accountability by departments and entities to avoid, for example, walkabout aircraft engines.

But sometimes MPs are just concerned about a handful of words among several thousand. Or 49 words from the 4,284 words of Mboweni’s MTBPS speech. To be precise:

According to the Independent Commission on the Remuneration of Public Office Bearers’ determination, from 1 April 2018, an ordinary MP earns R1,123,140 a year. Those chairing committees or serving as party whips earn a bit more. Steenhuisen, as leader of the official opposition, and Majodina as the ANC chief whip, both earn the same – R1,623,888 a year.

But ANC MP Dipuo Peters – one-time Northern Cape premier, then energy and later transport Cabinet minister, now a backbencher – seemed rubbed the wrong way by Mboweni’s millionaire statement, and she raised it on Thursday because it “does not sit well”.

“I’m sorry about the millionaires… But everyone who earns over a million [rand a year] is a millionaire.”

And that includes all of South Africa’s 450 parliamentarians. DM