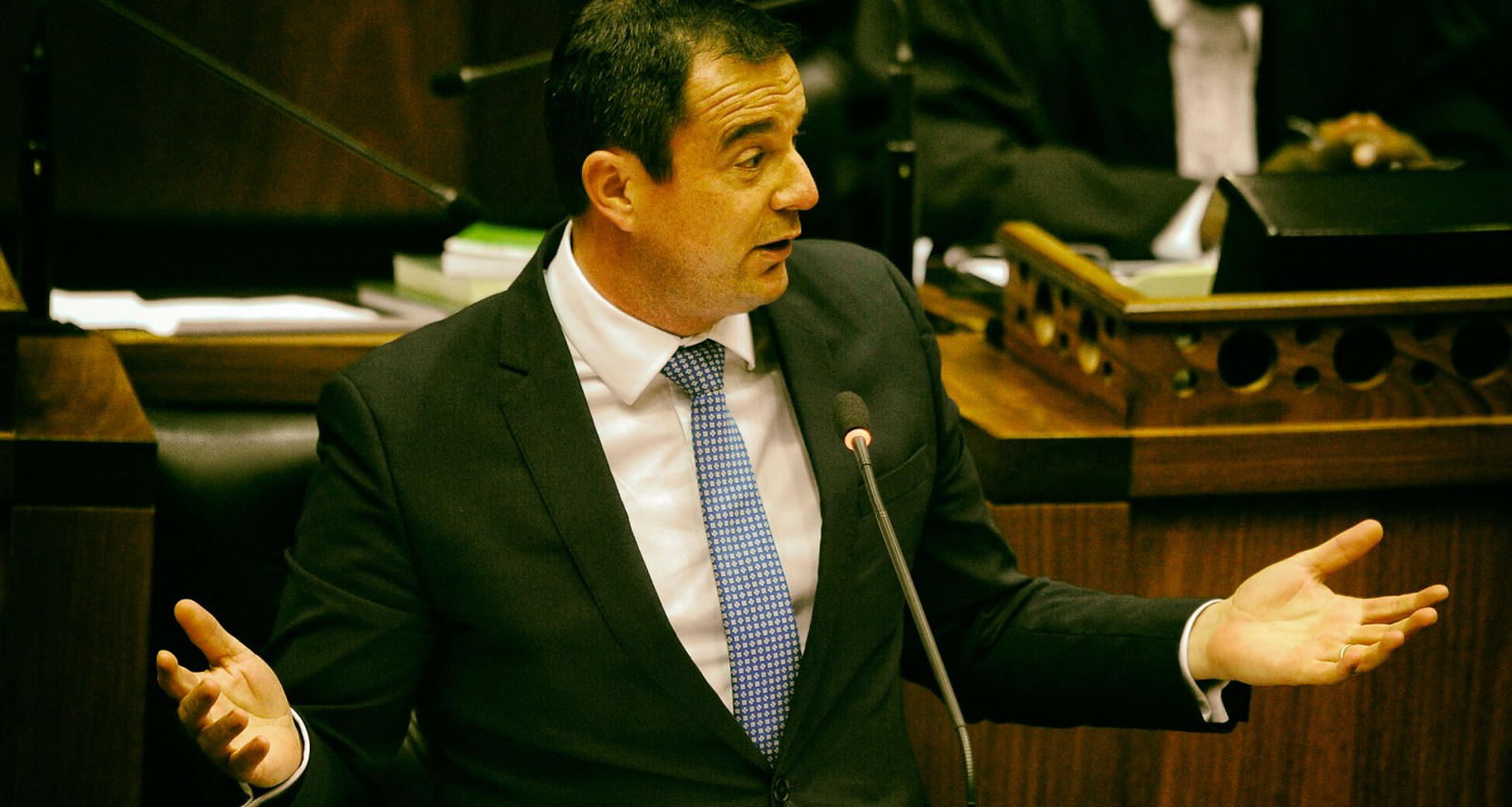 The DA Federal Executive Committee has decided the position of interim national party leader, pending a national congress in April 2020, will be contested when its highest structure between congresses, the Federal Council, meets on 17 November 2019.

DA parliamentary leader John Steenhuisen — the former chief whip was uncontested by the time nominations closed — on Monday 28 October told the Cape Town Press Club he would contest for the interim leader position in November 2019, and would be in the running for the leadership post at the April 2020 congress.

Stepping down as DA chief whip on Thursday morning meant John Steenhuisen returned to the parliamentary backbenches. Immediately. Appointed by ex-DA leader Mmusi Maimane, his stint came to an end when Maimane resigned — on Twitter — from Parliament less than 20 hours after resigning as party leader.

But for Steenhuisen, the spell on the backbenches may not be a long one. Daily Maverick is reliably informed he’ll stand for the parliamentary leader in elections scheduled for next Tuesday.

A party insider said Steenhuisen was seen as “a stabilising force”, an important factor in his being lobbied almost immediately after caucus. But certainty will emerge only by 8pm on Friday when nominations are scheduled to close.

The mood at Thursday’s caucus was one of “anger and disbelief”, according to the party insider. That’s because the timing and manner of Maimane’s resignation and departure from Parliament have put the party in a tight spot.

The DA cannot go into the Medium-Term Budget Policy Statement on 30 October without a leader. Nor can the biggest opposition party be leaderless when President Cyril Ramaphosa is fielding questions in the House on 31 October.

That there is such an election for the parliamentary leader is made possible by DA caucus rules — and the reality that the interim leader expected to be announced next week would not be an MP.

Those DA caucus rules date back to Helen Zille’s party leadership when she eschewed the parliamentary benches in 2007 to stay on as Cape Town mayor, and from 2009 to be Western Cape premier. Maimane returned to the practice of the national leader also being parliamentary leader, as it had been the case when Tony Leon led the party.

An interim leader is expected to be announced next week by the DA Federal Council, and it is a council decision. On Thursday, the smaller structure seized with day-to-day matters, the Federal Executive Committee, was taking legal advice because usually when a national leader becomes unavailable, the federal chairperson steps in. But incumbent Athol Trollip had also resigned on Wednesday.

In an additional twist to Maimane’s Twitter resignation from Parliament, within 24 hours of his resignation as leader, Trollip’s resignation has been tweaked to be only as federal chairperson and not from the party as had been widely understood.

Two DA insiders at national level told Daily Maverick by Thursday Trollip was staying on as a DA member, to return as a councillor in Nelson Mandela Bay Metro, where he was once mayor. The aim was to oversee a handover and transition, according to one of the insiders, which would not have been possible if he had also resigned from the party as his council seat would immediately have become vacant.

Trollip confirmed to Daily Maverick that he was returning to the council, but only to “ensure there will be no vacancy in our ranks when the motion of no confidence” is held, again against Mayor Mongameli Bobani .

“I am meeting my provincial leader (Nqaba Bhanga) to work out my exit. I will be resigning in due course.”

The DA moves quickly — Trollip and Maimane were gone from its “Our Leaders” page on its website by Thursday afternoon.

And while the announcement on an interim leader by the federal council is anticipated only next week, it appears one of Trollip’s two deputies, ex-Western Cape DA leader and the province’s present Agriculture MEC Ivan Meyer, is tipped as that stand-in, pending an elective national congress in early 2020.

Meyer was elected at the 2018 national congress, and as the congress is the party’s highest decision-making structure, it carries weight. Bluntly put, the DA right now would not be served by a pale male interim leader, or even Zille in that position.

“The optics of that (Zille as interim leader) is disastrous. It’ll look like a coup by the IRR (Institute of Race Relations),” commented one DA senior.

The institute has lobbied strongly against Maimane in an effort at what it called returning the DA to its original values, which the IRR views as classic liberalism and even libertarianism: market economy, individualism and the negation of South Africa’s racialised poverty and inequality.

Zille was a fellow at the IRR after her second, and constitutionally last, term as premier. Entering the contest for DA federal council chairperson at the last minute, she said she’d resign from the IRR if elected.

It remains to be seen how the impact of the IRR lobbying plays out in the DA’s broad church of liberalism, where unlike libertarianism or classic liberalism, social liberalism allows race as a proxy for disadvantage, poverty and inequality, as the DA had resolved in late 2013. With all the leadership changes, the ideological battles have yet to fully unfold.

By Thursday the DA was in full crisis management mode over the bruising fall-out from the election of Zille as federal council chairperson. That was never going to be without ructions, but it is not quite clear how expected the triple resignations — Maimane, Trollip and also Johannesburg Mayor Herman Mashaba — were.

What is certain is the party knows it faces an uphill battle 20 months before the next local government elections in 2021. The pressure is on.

In her first statement as federal council chairperson, who doubles up as federal executive committee chairperson, Zille said the DA was taking the necessary steps to ensure the “democratic project” was not derailed by internal or external factors.

“We would like to thank our members and supporters for standing by us during this difficult period. We remain committed to our values of freedom, fairness, opportunity and diversity,” Zille said.

But despite immediate steps by the DA to ensure stability, nothing will be resolved until the national congress. DM

UPDATE on 28 October, 2019: The DA Federal Executive Committee has decided the position of interim national party leader, pending a national congress in April 2020, will be contested when its highest structure between congresses, the Federal Council, meets on 17 November 2019.

DA Parliamentary Leader John Steenhuisen – the former chief whip was uncontested by the time nominations closed – on Monday 28 October told the Cape Town Press Club he was contesting for the interim leader in November 2019, and he’s in the running for the leader’s post at the April 2020 congress.