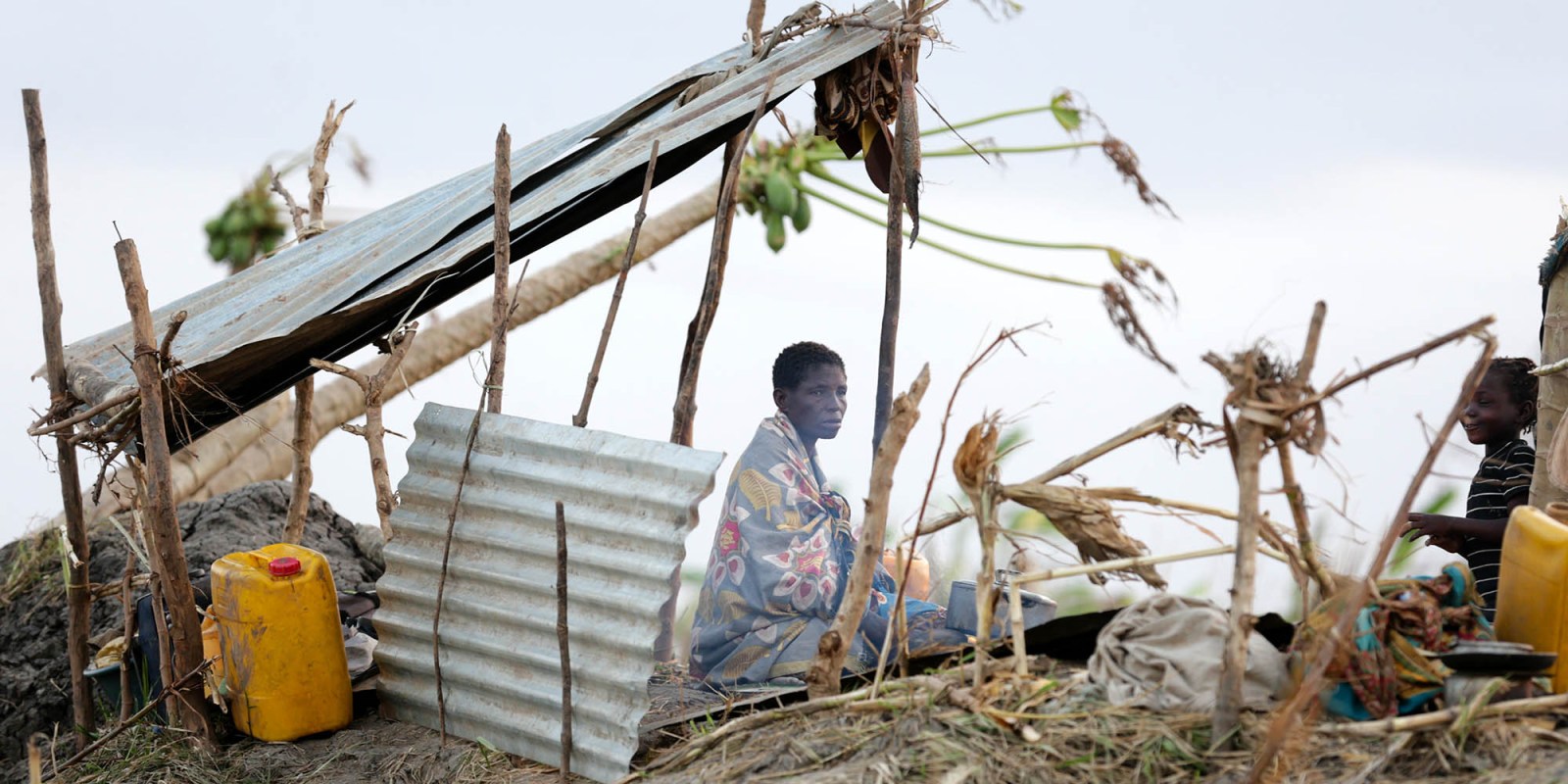 A displaced woman sits at her improvised shelter in the Buzi region after the passage of cyclone Idai in central Mozambique, 27 March 2019. (Photo: EPA-EFE / Tiago Petinga)

Just a few months ago, two cyclones (Kenneth and Idai) destroyed the homes and livelihoods of hundreds of thousands of people in parts of southern Africa. The cyclones, along with widespread drought, forced desperate people to migrate. But links between migrancy and xenophobia, violence against women and the growing climate crisis across southern Africa and well beyond have been largely neglected.

In the past weeks, South Africa has been the setting for a series of horrific attacks on other African people and brown immigrants and by a stream of stories of femicide and violent crimes against women.

Immigrant communities and concerned South Africans have marched against xenophobia, and women took to the streets in anger against government, corporations and elites attending the World Economic Forum-Africa for failing women again and again. Then, on Friday 20 September, thousands of South Africans joined with four million people around the world as part of a global Climate Strike to demand the radical and rapid changes needed to guarantee a life for ecosystems and people in the coming decades.

Just a few months ago, two cyclones (Kenneth and Idai) destroyed the homes and livelihoods of hundreds of thousands of people in parts of southern Africa. The cyclones, along with widespread drought, forced desperate people to migrate within and across borders in search of income, sustenance and even a simple roof over their heads.

But links between migrancy and xenophobia, violence against women and the growing climate crisis across southern Africa and well beyond have been largely neglected. The connections may seem distant and tangential, but they are firmly present and will only become more pronounced in coming years.

As Idai dramatically shows, Africans are living the climate crisis. Global average temperatures have increased by 0.8 degrees Celsius since 1880. The year 2019 has thus far broken all previous average temperature records. At the current trajectory established by pledges on the part of governments around the world, average temperatures will very conservatively increase by just over three degrees by 2100. Processes that accelerate warming trends, such as the melting of the Arctic ice, are occurring years, if not decades before mainstream scientists have predicted.

Food security is deteriorating, with emergency situations prevailing in parts of southern Madagascar, Mozambique, Lesotho, Zimbabwe and Eswatini. Droughts, floods, hurricanes, persistent malaria and generalised water scarcity are unfolding and set to increase in the next few decades. Millions of African immigrants to South Africa are characterised largely as economic and political refugees, but many are here escaping climate change and its deepening negative impacts.

The xenophobic attacks of the past few weeks are explicitly linked to the social, economic and political crises affecting the majority of poor and working people in South Africa. Neoliberal capitalism has widened the gap between rich and poor, with just 10% of the population currently holding more than 70% of net wealth. Corruption and cronyism have contributed to deepening inequality, as has the phenomenon of illicit financial outflows which reached R237-billion in South Africa in 2011 alone.

These outflows occur when money “disappears” from a country’s records through illegal earnings, transfers or spending. This theft of wealth is directly linked to mining capital which is the sector most guilty of tax dodging. Mining firms still maintain a migrant population from Zambia, Mozambique, Lesotho and Zimbabwe, because the black men’s cheap labour, alongside their South African counterparts, give mining capital great profits.

Ruling party politicians include many enmeshed in coal mining and transport. Some have manipulated widespread anger and disappointment by society in the failure of the promised transformation of post-apartheid South Africa to finger African immigrants as part of the problem. The narrative is a familiar one of social and public services being abused by “illegal” migrants, and the hijacking of jobs by the same.

Across Africa, migrancy and human displacements are already occurring as climate change renders territories uninhabitable, and disasters force population movement. Conflicts are set to intensify as desperate communities feud for control over land, water, jobs and houses. The case of Lake Chad in Central Africa is a powerful example of the impact of climate change on local populations, migration patterns and conflict.

The lake has contracted by 90% since the early 1960s, resulting in food scarcity affecting seven million people, and the displacement of 2.5 million. Migration pressures increase conflict over scarce resources and multiply threats in the case of areas already conflict-affected.

In all of this – climate crisis and xenophobic violence – women are the ones who carry the load because of an unequal gendered division of labour which assigns women primary responsibility for the “care of the family”. They are the ones who must walk further in search of clean drinking water and safer energy and put food on the table under increasingly difficult circumstances.

WoMin’s participatory research with women in northern KwaZulu-Natal during the height of the El Nino-related drought in 2016 revealed impacts of climate change on women’s labour. In Somkhele, impacted by the Tendele Coal mine, women were making a two to three-hour round trip walk to fetch just 25 litres of water. Rapes and the murder of one woman occurred because of the distances they were forced to traverse in unsafe areas.

When communities are displaced, it is women and children who are most affected by violence, often sexualised in nature. This experience is confirmed by the stories of women from Sudan, the Democratic Republic of the Congo, and other conflict zones on our continent.

The United Nations refugee agency in South Africa reported that “sexual and gender-based violence” complaints to their hotline spiked during the xenophobic attacks. But this is the only reference to violence against women and xenophobia acknowledged in the past weeks. Patriarchy fuels violent attacks on women, and this same system silences women who carry the fallout of social conflict.

We – citizens, especially members of social movements, trade unions, faith bodies and NGOs – need to urgently start connecting the dots between climate crisis, migrancy and dislocation, and increased violence against the “Others” who compete for scarce jobs and natural resources, and in the midst of all of this deepening violence against women.

Our struggle for climate justice will need to be a truly pan African one, which recognises the central role that South Africa – which is the 11th highest per capita carbon emitter globally, and the largest by far in Africa – has played in fomenting the climate crisis.

The Global North must pay its debt, as must South Africa. The climate justice agenda here will need to tackle xenophobia and all manifestations of hatred, and it will have to be a movement which embraces a deep commitment to feminism and the liberation of all women.

And finally, and very importantly, we are tasked to build a climate justice agenda and movement which centres around decent work and livelihoods in the transition to a just economy and society. This just transition agenda will need to support the very necessary adaptations of communities, workers and especially women to a climate-changed world. MC

Samantha Hargreaves is Director of African Women Unite Against Destructive Resource Extraction (WoMin). WoMin is a Pan African alliance working with communities, and specifically, women impacted by extractives (largely fossil fuels and dirty energy) industries across the continent. It strives, with others, to build pan African solidarity and movement to challenge the injustices of patriarchy and extractivist capitalism, which lie at the very heart of the many crises the world and the majority of its peoples face today.